In the San Francisco Bay Area, home âsales plunged to a six-year lowââ¦. while prices dropped 4.3 percent from a month earlier. (Los Angeles Times) Additionally, sales of new and existing homes and condos fell to their âlowest level for the month since 2008â³, the peak of the financial crisis.

Similarly, Dataquick announced that âJanuary was the worst month for home sales in nearly 3-years for Southern California.â Hereâs more from Dataquick:

Low inventory is the favorite excuse of realtors who want to conceal whatâs really going on in the market. The fact is, the higher rates (since the Fed announced its scaling back of QE) and higher prices have weakened demand and sent moneybags investors racing for the exits. Weak fundamentals (Stagnant wages and high unemployment) have added to housingâs troubles. Unemployment remains stubbornly high in the Golden State. Itâs currently locked at 8.7 percent, a full percentage point above the national average.

Sales have also dropped sharply in Las Vegas and Phoenix, which were red-hot in 2013. In Vegas, âsales dropped in December to the lowest level for that month in six years â¦ Total December home sales were the lowest for that month since December 2007.â (Dataquick)

In Phoenix, itâs the same deal. Check out this article in the Phoenix Business Journal which explains the situation without placing the blame on low inventory. Hereâs an excerpt from the article titled âHas the Phoenix housing market finally balanced out? 2014 could provide the answerâ:

âDespite the fact that there were 36 percent more homes on the market Valleywide in December than a year earlierâ¦demand has continued to fizzle since Julyâ¦In fact, single-family home sales were down 17 percent year-over-year, the report said. Even with a 12 percent increase in listings priced below $150,000â¦sales in that range plunged by a whopping 47 percentâ¦

Demand has been falling for several reasons. Rising interest rates and poor consumer confidence, largely ignited by the government shutdown, are among them. On top of that, many wannabe buyers donât have the money for a down payment or have poor credit from a previous foreclosure or short saleâ¦

Additionally, Wall Street-backed investors have been losing their interest in the Valley as home prices rebound and foreclosures lessen. Institutional investors made up 19.3 percent of Valley home sales in December â less than half their peak market share in July 2012, Orr saidâ¦ (Has the Phoenix housing market finally balanced out? 2014 could provide the answer, Phoenix Business Journal)

There it is, in just two paragraphs, everything you need to know. Sales are âfizzlingâ because rates are higher, prices are higher, and the economy stinks. The whole inventory-thing is a red herring, in fact, if you comb the data youâll see that inventory had been increasing for a full year until August 2013, when the banks realized that they were in big trouble.

Because the Fed announced that it was going to reduce its asset purchases (QE) which pushed up mortgage rates by a full percentage point overnight. Thatâs what killed demand. (Mortgage rates had been in the 3-percent range, now theyâre in the 4â²s.) Two months later, the banks started reducing their inventory in order to keep prices artificially high and avoid more balance sheet hemorrhaging. It is a tale of blatant collusion that can be proved by simply browsing at a chart of housing inventory for the last couple years. (See chart here.)

Now take a look at this chart of mortgage rates and you can see how they spiked shortly after the Fed made its announcement in June. Rates have never really come down since. This is from the Mortgage Reports:

Housing expert Mark Hanson predicted the current sales collapse back in September 2013 in a post titled âHousingâ¦Where we sitâ which we cited in an earlier article. Hereâs a clip from the post:

âStarting in Q4 2011 âhousingâ was injected with arguably the greatest stimulus of all time; a 2% âpermanent mortgage rate buy downâ gift from the Fed. As a result of rates plunging over a very short period of timeâ¦purchasing power was created out of thin airâ¦

Some think the rate âsurgeâ (note: The recent rate increase) will have little impactâ¦while the bearsâ¦think the rate surge was a rare and powerful âcatalystâ only rivaled two times in the last seven years. The first, when the housing market lost all itâs high-leverage loan programs all at once in 2007/2008; and the second, on the sunset of the Homebuyer Tax Credit in 2010.

In both these previous instances â¦ when the leverage/stimulus went away â¦ housing âresetâ to the current supply/demand/lending guideline/interest rate environment, which in 2008 resulted in the âgreat housing crashâ, and in 2010 the âdouble-dipâ. Here we sit in a eerily similar situation.â (âHousingâ¦Where we sitâ, Mark Hanson)

In other words, the higher rates are going to send housing sales off a cliff. Which they have. Hanson was right and the media Pollyannas were wrong. In the absence of âwhat Hanson callsââthe greatest stimulus of all timeâ, the sales-slide should continue for some time to come.

The distortions in housing are so extreme âdue to the persistent meddling of the Fed, the government, and the banksâthat traditional areas of market strength have gradually eroded while speculation has reached fever-pitch. For example, in December, firsttime homebuyersâthe âMotherâs milk of the housing industryâslipped to just 27 percent of all sales while all-cash buyers represented a full 42 percent of all residential sales. This illustrates the impact the Fedâs âeasy moneyâ policies are having on the market. Everythingâs upside-down; organic demand is steadily declining, while speculation is at levels never seen before. Itâs crazy and it wonât end well.

Just this week, the California Association of Realtors (CAR) released its Traditional Housing Affordability Index which confirmed that buying a home is increasingly out-of-reach of ordinary working people. The report found that âonly 32 percent of home buyers could afford to purchase a median-priced, existing single-family home in Californiaâ¦..To purchase a median-priced home in California, homebuyers needed to earn a minimum annual income of $89,240. Compared to 2012, where homebuyers needed to earn an income of $66,860â¦.The median home price for California was $431,510 in Q4 2013.â (âHousing Affordability Drops in Californiaâ, DS News)

The fundamentals are not strong enough to support todayâs prices, which is why sales are tanking. The market has peaked, the bull run is over. Even the banks know it, which is what makes the chart below so interesting, because it suggests that the nationâs biggest lenders are planning to dump more of their backlog âshadowâ inventory onto the market before prices drop and theyâre left holding the bag. Check out the sudden reversal in foreclosure filings in January. 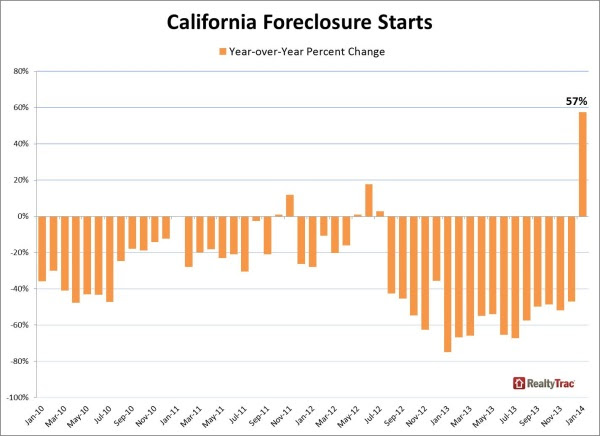 Will you look at that! It looks like the banksters are getting ready to jump before the old Housing Hindenburg slams into the powerlines and explodes into sheets of flames.