As a chicken chomping, coke snorting species, we have three main foes. 1) Beasts more ferocious than us, such as tigers, lions and, well, just about all other animals, since weâre such wimps. 2) Living organisms we canât even see, such as viruses. 3) Other men, of course, since man is clearly manâs most lethal and sadistic enemy.

The first category is nearly extinct, with even the most frightful animals turned into lovable cartoons, for our kidsâ amusement. In the zombie, however, all three threats are combined, since heâs a man, sort of, that acts like a fierce, bonkers beast, and if he bites you, then youâre a gonner, for sure, thanks to his virus laden spit. Zombies also resonate because theyâre contemporary and urbane cannibals. In torn jeans, hoodies or suits, theyâll eat your flabby ass. Though literal man eaters have become extremely rare, we know in our bones their taste and tactics have merely been transferred into more elegant and expensive looking gentlemen. Most of us also know weâre being devoured, chunk by gristly chunk, daily. 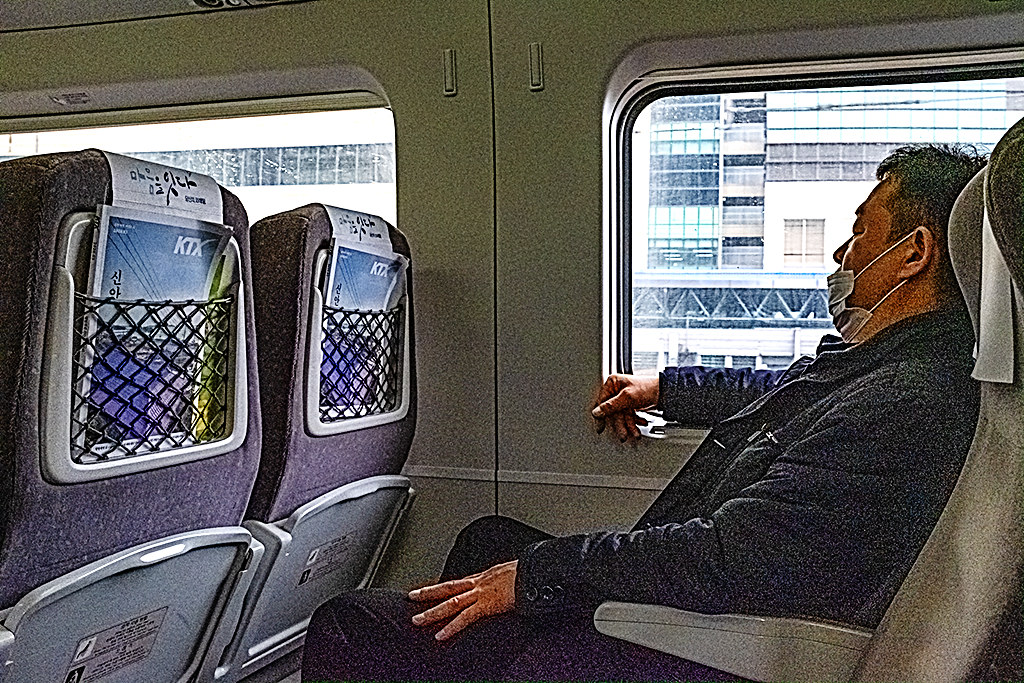 These cheerful thoughts occur to me because last week, I took a bullet train from Seoul to Busan, and thereâs a pretty damn good zombie movie called Train to Busan. Weâre also staggering through a virulent miasma right now, in case youâre Rip Van Winkle, and no, I this ainât no media hoax. Shitâs real. When paradigm shifts, we must readjust our thinking and habits with much clarity, effort and discipline, not that we have a choice.

True to its title, nearly all of Train to Busan takes place on a train, and this is obviously symbolic. Before there were planes or trains, ships were common allegorical vehicles, as in Platoâs Ship of Fools, Melvilleâs Moby Dick or Conradâs The Nigger of the âNarcissus,â etc. Floating on a vast unknown, weâre all in this together. Trains can also be stand ins for the community. Encased, weâre being hurled towards a common destiny, though some are reclining in first class or feasting in the bright dining car, while the rest, stiffly upright, are munching on corn chips in the semi dark.

The filmâs protagonist is an emotionally dead investment banker. Focusing only on his work, the banker is already separated from his wife, and he barely talks to his small daughter. For her birthday, he gives her a Nintendo Wii without realizing he has already bought her one, just months before. On the train, he shows no reaction as the first zombie victim runs screaming by, and his face barely registers shock or pain as he hears his momâs anguished last words, over the phone, as she moans, retches and gasps while apparently turning into a zombie. Heâs cooler than cool. Redeeming himself, the banker finally learns how to team up with a blue-collar guy to fight off zombies, and they both die while saving others.

Though far less corrupted, his daughter also says nothing as she witnesses her first zombie, just outside the train window, pouncing on a man. Itâs director Yeon Sang-hoâs little joke to have his characters stay placid at the sickest spectacles, but thatâs the story of our time. We all do this a thousand times each day. Barely responsive, weâre deader than zombies, with our passivity punctuated only by impotent anger.

Ah, but thereâs one arena where our passions run free, and thatâs spectator sports, though most of the time, we stare at the screen as if weâre comatose, with barely a facial twitch to register another whatever.

Iâm not going to lie to you. My main objective in coming to South Korea three weeks ago was to catch as many games as possible of the Womenâs Korean Basketball League, for how can any objective and sane man not be enthralled by the nightly exploits of the KB Stars, S-Birds, Blue Minx and OK Shoot? I couldnât wait to sit forever at half court to constantly shudder and duck as gigantic Korean ladies fly, seemingly right over me, to smirkingly execute triple pumping, 720 degree and blind folded slam dunks that the great Shawn Kemp himself never dared attempt. Alas, I found to my infinite sorrows, regrets and even recriminations that all WKBL games would now be played only in empty arenas. Yes, even more cemetery-like than before, thanks to the corona fuckinâ virus.

Spectator sports seemingly prove to us that not everything in life is rigged and, moreover, that we still belong to a community, just because we all root for the same colors. Along with pornography, spectator sports are the ruling classâ greatest pacifier of the masses, so if theyâre suddenly taken away, does it mean our rulers have lost control of the narrative?

When I landed in Seoul three weeks ago, the coronavirus crisis appeared to be primarily an East Asian problem, with hardly anyone but Orientals dying. There was no outbreak in Iran or Italy, much less the rest of Europe or North America. Now, horrible news swarm from the West, where death counts rise relentlessly, and entire countries are crippled and shuttered.

If this coronavirus was unleashed by the US, as has been charged by many, including Chinese officials, then why didnât Washington take precautions to protect its own population? And why was it so paralyzed as the crisis unfolded? More importantly, how does Wall Street benefit from the poleaxing of the American economy? The 1% have just lost trillions.

If the Chinese government was responsible for the outbreak, albeit only accidentally, then why didnât it rush to contain it immediately, instead of just spinning the news? Perhaps Beijing was unaware of what had occurred in Wuhan? 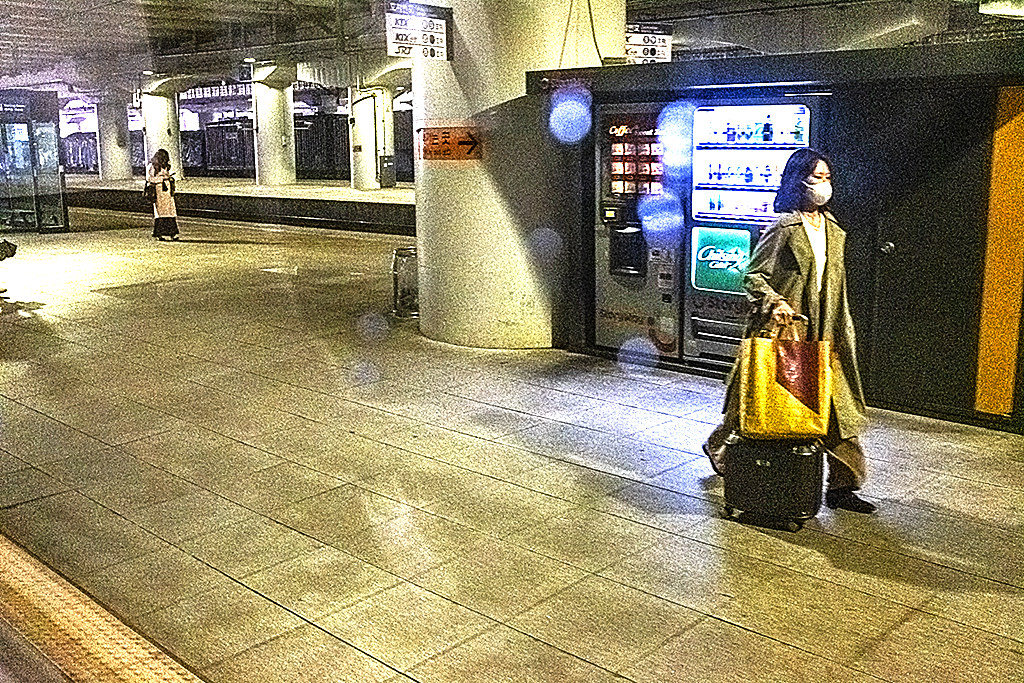 On the train to Busan, we passed Daegu, the epicenter of the coronavirus outbreak in South Korea. The mostly empty platforms at midday had but single, desolate figures at disease-free intervals, among the endless columns. It was a de Chirico vision come to life, but only barely. At least they werenât zombies.

Unlike China, and now Italy, Spain, France and others, South Korea never locked down even a single neighborhood, much less a city. To combat this pandemic, it immediately launched a comprehensive testing campaign, which has yielded alarming daily tallies of infections, though tailing off significantly as of late, auguring a recovery. For this deliberateness and transparency, South Korea has paid a huge price in international isolation and lost commerce, but it has managed to maintain, nationwide, an impressive semblance of normalcy. People go to work. All stores are open and well stocked.

Though most restaurants and bars have suffered greatly, youâll still find, in just about any neighborhood, those that can still pack them in, for there are obviously versions of black bean noodles, ox bone soup, spicy fried chicken or bibimbap, etc., that are good enough, or at least cheap enough, to risk a small chance of death to eat. Here in Busan, Iâve been frequenting the niggardly named Food CafÃ©, where for just $5 or so, I can stuff my face with a wholesome meal. Last night, I had me some fine fried rice with garlic and bacon, which made me ponder, if only for a moment, Why wasnât I born Korean?

One type of Korean business that canât be flourishing right now is the âkiss bang.â Donât get too excited. Let me explain. âBangâ merely means âroom,â so youâre not going to bang anyone at such an establishment. Youâll certainly kiss and fondle a bit, at around $50 for half an hour. Itâs perfectly legal, as long as you donât go downstairs, not that thereâs anyone bent over a peep hole to spy on your sneaky infractions. The girls tend to be college students, so itâs cute and sad. Moreover, thereâs a reason why many whores or even go-go dancers donât want you to touch their face. The head is really sacred. In any case, swapping spit with multiple strangers during a pandemic is, well, not the brightest idea. Itâs almost as dumb as making out with zombies.

After checking into the appropriately named One Way Guest House in Busan, I returned to Daegu the next morning to see what life was like beyond its rail depot. Getting off the train, I saw an immobile monk, in a black knit cap, white mask and slate gray robe, sitting by himself as a white pigeon fluttered. Inside the station, a dozen passengers waited to depart. Cafes were open. Having never seen its usual volume, everything seemed normal.

That day, I inspected a vast luxury shopping mall, had lunch at a greasy spoon, drank a cappuccino at a chain cafÃ©, wandered many streets and walked briskly on a river hugging trail along with dozens of others. Compared to my experience of Seoul, Suwon, Incheon, Busan and Gimhae, Daegu did come off as more subdued, but it was still functioning, with traffic everywhere, and people out shopping. 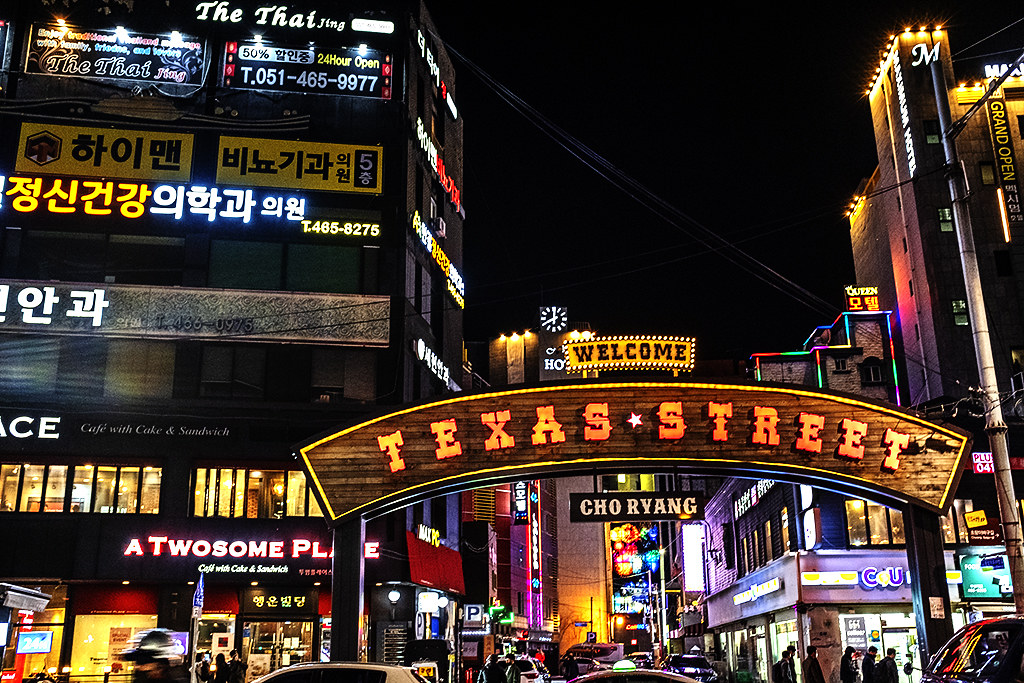 As for my Busan neighborhood, Choryang-dong, itâs still jumping, if only on one leg. Russian whores still lurk on Texas Street, and inside talking bars named Las Vegas, Miami, Seattle and London, etc., Filipina hostesses still wait for you to entertain them. The areaâs many homeless still sleep outside in the frightful cold. Teenagers still flock to McDonaldâs.

Maybe you can tell me what comes next. It should be stressed that the coronavirus is not the ultimate cause of our economic, political and societal unraveling, for weâve been a dead man walking for a while.

Since weâre all linked, even a productive, efficient and disciplined society like South Korea must pay this belated penalty. Zombie surges await.