Philadelphia, 2011
◄►Bookmark◄❌►▲ ▼Toggle AllToC▲▼Add to LibraryRemove from Library • BShow CommentNext New CommentNext New ReplyRead More
ReplyAgree/Disagree/Etc. More... This Commenter This Thread Hide Thread Display All Comments
AgreeDisagreeThanksLOLTroll
These buttons register your public Agreement, Disagreement, Thanks, LOL, or Troll with the selected comment. They are ONLY available to recent, frequent commenters who have saved their Name+Email using the 'Remember My Information' checkbox, and may also ONLY be used three times during any eight hour period.
Email Comment Ignore Commenter Follow Commenter
Search Text Case Sensitive  Exact Words  Include Comments
List of Bookmarks

A guy with who once pointed a gun at the belly of a woman during an armed robbery was actually âa gentle giant,â according to ABC News. It quotes one of his buddies, âAnybody who knows him will tell you heâs not confrontational.â At George Floydâs funeral, the mayor of Minneapolis, Richard Frey, knelt by the coffin and sobbed for a full minute, his body shaking.

For over two weeks, riots have erupted across America, and it doesnât look like they will stop soon. Protesters and cops have been killed. A black man has just been shot by police in Atlanta, triggering another riot.

Reading about all this turmoil, I think back to my one visit to the Twin Cities, in 2014. Arriving in Saint Paul on a train from Williston, North Dakota, I checked into a motel, and was on the streets by dawn. It was July 4th! 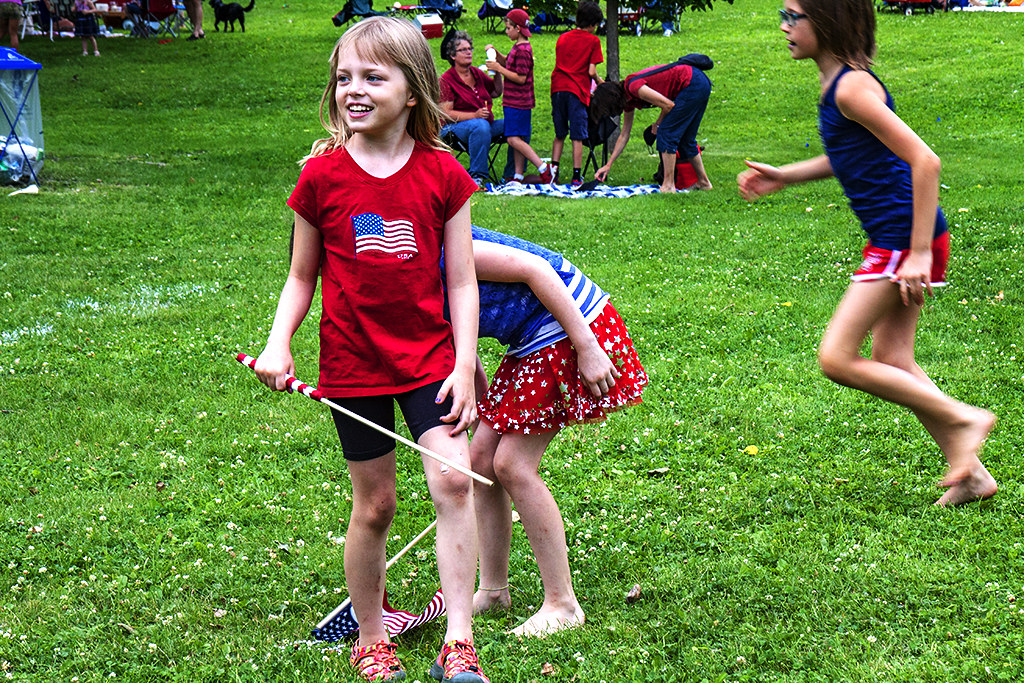 Wandering around haphazardly, I ended up at Langford Park, where there was a large picnic. Old people relaxed on lawn chairs, kids ran around and the Pigâs Eye Jass Band was swinging to Gershwinâs âStrike Up the Band.â Having been to many cities in at least 35 states, I had never encountered such a wholesome and tranquilly joyous gathering. It was as if I had stumbled into a vast Norman Rockwell painting, or time traveled to an America of half a century ago.

Though there were some blacks and Orientals, almost everyone there was white. Still, I never felt unwelcomed. I chatted with a middle-aged gentleman who gave me a fascinating primer on the Iron Range. Pasties I already knew about, from my time in England. 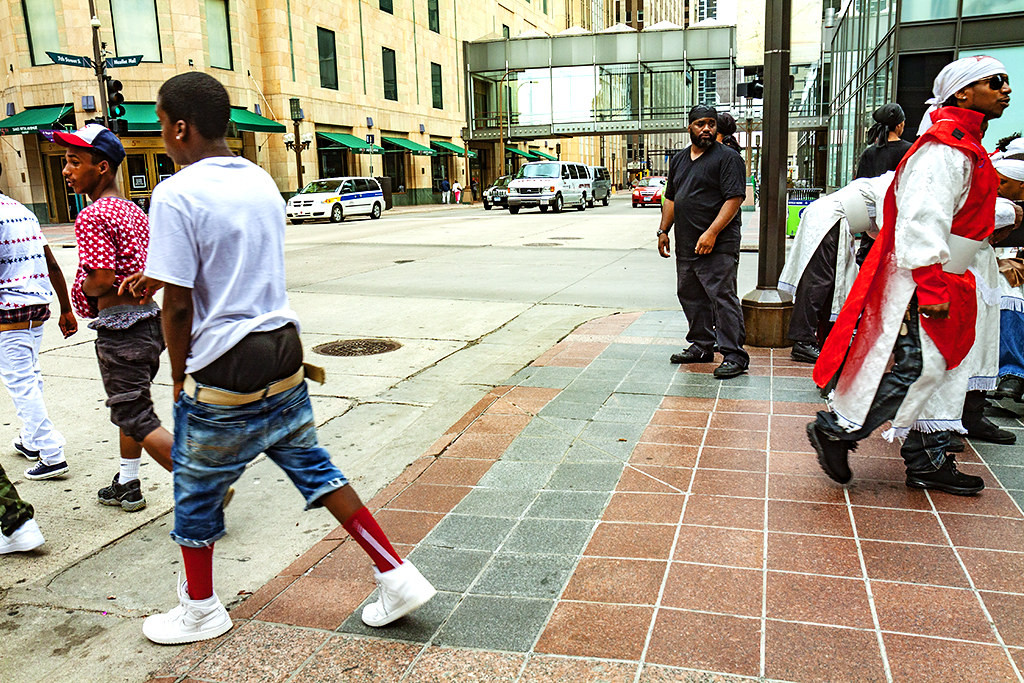 Later that day, I went to downtown Minneapolis. On Nicollet Mall, I reentered a more familiar urban America of pants slung below butt cracks, eyebrow piercings and neck tattoos. A gaunt white guy had small oil paintings sewn onto his black coat. I passed about ten members of the Israelite Church of God in Jesus Christ. Most were in tasseled and embroidered white robes, with two red Stars of David on their chests. The bodyguards wore all black. I have seen the same group in Philly, Washington and Atlanta. Their membership is limited to blacks and browns, for whites are sodomizing devils who deserve to be enslaved or exterminated.

Although Nicollet Mall was just six miles from Langford Park, what I saw were two entirely separate Americas. In Philly, crossing a single street can land you in a different world. Often, whites have simply given up and abandoned their neighborhoods, complete with the large churches or synagogues they so lovingly built. Thatâs not racism, but fleeing for your life, and blacks have done the same, the first chance they get.

In black ghettos across America, Iâve marveled at the ruins of once magnificent houses of worship, as well as formerly beautiful homes, now charred, just for the fun of it, or boarded up. If itâs a majority black neighborhood or city, as in Gary or Jackson, you can be sure itâs a disaster, but of course itâs all the fault of fudge packing white devils.

As incompatible Americas again collide, cities are looted and burnt, leading many to think itâs a rerun of racial riots from the 60âs. Others believe itâs an intensification of the resistance against Trump, racist cops, the patriarchy and/or Capitalism. Itâs a new beginning, they hope.

To better understand whatâs happening, though, we should reexamine Maoâs Cultural Revolution. Lasting a full decade, it destroyed much of Chinaâs cultural heritage and tore that society apart, all in the name of getting rid of the âFour Oldsâ: old customs, old culture, old habits and old ideas.

It was a reign of terror against man, civilization and China itself, but it had to be done, for there was a socialist utopia at the end of the blood splattered tunnel, said Mao.

Maoâs shock troops were high school and university students, woke idiots, in short, with their little Red Book. They denounced professors, intellectuals and artists, torched temples and monasteries, burnt books and paintings, smashed art objects, tore bits from the Great Wall and vandalized the 2,400-year-old cemetery of the Kong Clan, where Confucius himself was buried. Digging up one of his descendants, they hung the naked corpse from a tree.

Mao had stipulated that Red Guards could travel on trains for free, so they roamed to even the most remote areas, to destroy.

At the end of the Cultural Revolution, Mao rewarded his loyal and ardent zealots by sending them to distant farms, for they had outlasted their usefulness and become a political liability. Standing in mud, buffeted by cold winds and far from home, they could further reflect on being woke.

Mao unleashed his Red Guards on all of his potential or even imaginary adversaries. Ruthless, calculating or just paranoid, he even turned on loyal comrades who had been with him on the Long March, but thatâs just how tyrants roll. It was an extreme power play.

Today, Americans are also caught in a power play. Itâs all too inevitable, for theyâve been under siege for decades, with everything about them systematically discredited, deformed or attacked. In a 1997 lecture, Joseph Sobran elucidated:

The modern state has to police more and more of our lives, because it has set itself against the normal. It defines normal acquisition as greed, normal group preferences as bigotry, and normal morality as hate. Consequently it has to watch over us at all times to make sure we arenât too assertive about our normality, while it caters to our abnormalities.

Treason used to mean the subversion of the state. But the state itself now works the subversion of society. In other times, including Shakespeareâs, it has been understood that the stateâs whole justification for existing is to support and protect normal life against the criminal, the savage, the perverse. Even tyrants never questioned this assumption.

Just like Maoâs Red Guards, then, American rebels running amok do not threaten but serve a ruling clique. Look at their targets. They are destroying middle- and working-class stores and communities. Theyâre tearing down Main Streets.

Subverting society, the state derides all traditional standards and definitions of decency, as it normalizes or even celebrates criminals, savages and perverts. To get confirmation of this, just turn on your television, browse through a magazine or talk to your kids about what theyâre learning in schools.

Clear, nuanced and measured language has been replaced by raving idiocies and obscenities. Piss Christ is beautiful. Shakespeare sucks. Unless theyâre trannies, men are toxic, especially white ones.

To remake a nation, then, you destroy its heritage, its âFour Olds.â In the West, old ways are inextricably linked with Christianity and whiteness, so both have to go, but how do you get white majority countries to denounce their own heritage?

To start with, you use the academy and media to drum guilt and shame into them, repeat endlessly that only whites can be racist, that they owned slaves, lynched blacks, dropped bombs everywhere and stayed silent as Hitler gassed six million Jews, the worst crime ever. As the first step towards their own salvation, then, whites must renounce their whiteness.

If a white meekly squeaks that, well, racism is in the heart, so anyone can be a racist, that slavery was pretty much everywhere, in China, Korea, Japan, the Americas before Columbus and all of Africa, etc., that men of every race can be super sadistic in abusing their own kind and even corpses, using whatever technology they have available, and most whites actually fought against Hitler, and finally, he doesnât believe in collective guilt, especially since his grandpa was a serf, his daddy died in the coal mine and heâs a minimum wager himself, working way past retirement age, you can just shut this asshole up by shouting in his face, âI should have known all along you were a Nazi!â

Mark LeVine, a history professor at the University of California, Irvine, sums it up most eloquently, âWhile whiteness and its avatar, âWestern civilization,â have for centuries declared themselves to be the epitome of Enlightenment and freedom, historians have demonstrated not only the historicity of whiteness and its contingency, but that whiteness emerged directly and almost exclusively through its connection to imperialism/colonialism, slavery, genocide and modern-day racism [â¦] the humiliation and extermination of black people is the most enduring identifying marker of whiteness.â

Though often accusing Christians of racial genocide, Jews ignore that itâs inspired and justified by the Hebrew Bible. Moreover, Christians have often committed mass murders to benefit Jews only.

It doesnât matter. Donât sweat the details. All professors who still have jobs agree that whiteness is evil, as in white cops, white run prisons, statues of white men, white borders that keep out non-whites, so if youâre white, itâs high time you kneel down and beg forgiveness from the nearest Sub-Saharan African, for heâs your priest, saint and martyr!

White is filthy. Black is pure. Blackness transcends, so just yield to it. As they say on the streets, âOnce you try black, you never go back.â

In 1989, Madonna allegorizes all this with her music video, âLike a Prayer.â In the indigo dark, amid police sirens, she witnesses a gang of whites kill a white woman. Lit up, one smirking thug even has a chiseled face like a Hollywood Nazi. When a black man tries to help the victim, heâs arrested by a white cop.

Terrified and dressed like a whore, Madonna enters a black church, to kneel in front of a tearful black saint. She kisses his foot. Coming to life, the gentle black man kisses her cheek and forehead. Joy erupts! Singing and dancing with an exuberant, life affirming black choir, Madonna kneels again, this time in front of a black woman.

Reappearing, the black savior is now on top of Madonna.

Bookending this video, there are crosses burning because, you know, white people are always burning crosses outside black churches. Whites kill or arrest innocents. Blacks save.

Finally, who hate America, Christianity and whiteness so much, they risk killing themselves even, for no parasites can survive without a host?

Perhaps they already have another fat prey targeted, so as you fight among yourselves and die, they move on, laughing all the way?

Letâs not end, though, on such a down note. Thereâs not just hope, but potentially great news on the horizon. Since the Jewish stateâs major backer is fatally weakened, divided and in chaos, Israel will disappear as America disintegrates.

The always astute Dmitri Orlov clearly thinks so, for he suggests, âThere is a very nice, underpopulated Jewish Autonomous Region within the Russian Federation, on the border with China, to which Israelis will be able to evacuate once US financial and military support for Israel dries up.â

Since I donât think itâs wise to let in racial supremacists with a long history of despising Russia, I sure hope Orlov is being facetious.

In any case, I have friend in Lebanon who has invited me there. Together, weâll drive to a liberated Jerusalem, she promises. Oh, what a joyous day that will be, for all of humanity!