Home cooking in Hanoi, 2017
◄►Bookmark◄❌►▲ ▼Toggle AllToC▲▼Add to LibraryRemove from Library • BShow CommentNext New CommentNext New ReplyRead More
ReplyAgree/Disagree/Etc. More... This Commenter This Thread Hide Thread Display All Comments
AgreeDisagreeThanksLOLTroll
These buttons register your public Agreement, Disagreement, Thanks, LOL, or Troll with the selected comment. They are ONLY available to recent, frequent commenters who have saved their Name+Email using the 'Remember My Information' checkbox, and may also ONLY be used three times during any eight hour period.
Ignore Commenter Follow Commenter
Search Text Case Sensitive  Exact Words  Include Comments
List of Bookmarks

Iâm back in Hanoi. Noi Bai Airport was sparkling after its recent upgrade, and I rode into town on a wide, well-landscaped freeway named after general Vo Nguyen Giap. On both sides were shops and restaurants.

âI donât recognize any of this, brother,â I said to the taxi driver, a man in his mid 40âs.

âAh! Hanoi is much different now.â He laughed.

As the Hanoi skyline finally came into view, I blurted, âI hardly know Iâm in Vietnam!â Every lit sign on the highrises was in English. We crossed the Nháº­t TÃ¢n Bridge, built with a loan from Japan and designed by a Japanese firm. My driver slowed down so I could admire its five towers, illuminated in shifting colors. A native Hanoian, heâd been driving for eight years, with his finances tolerable and improving. âThere are still plenty of poor people,â he reminded me, âespecially in far off places.â

âDo you have any relatives overseas?â I asked.

âI have an aunt in Holland. She had gone to Bulgaria to work in a factory.â

âSheâs doing fine. Every two years, she comes home for a visit.â

We passed two preposterous pseudo-classical gates, crowned by galloping horses. Behind them were swanky houses for the nouveau riche. All the street names in this gated community, Ciputra, sound enticingly exotic, Main, Lake, Park, Central Park, Singapore, Pegasus, Atlas and Academy, etc. On the flight in, I had sat next to a man returning from Fiji, where his wifeâs posted to the Vietnamese embassy. He had three kids at American universities, in Minnesota, Ohio and New York State. âIâve been to a bunch of countries, uncle. Each place is interesting for 8, 10 days, then I want to go home.â

Leaving the freeway, a more familiar Hanoi, and Vietnam, came into view. A typical Vietnamese street is lined with shops and restaurants, with commerce often spilling onto the sidewalk, and until very recently, there were no Vietnamese neighborhoods that were strictly residential.

On my second day, I got up just before sunrise to wander around Vinh Phuc, my neighborhood. The restaurants were just opening up. Exercising, a man in a tank top walked backward past me. Sitting on a plastic stool across the street from a funeral home, a woman worked on a red, yellow, white and crimson wreath. I noticed a Japanese language school, a fishing gear shop and the Trang Bella hair salon. At a corner, a man lounged on his motorbike, waiting for his first customer. Unlike pedicabs, motorbike taxis havenât been banned. Though it is a wonderfully cheap way to get around, its slow pace clogs traffic, so the pedicab, a major icon of Vietnam, has been killed off everywhere except in a handful of tourist areas. The North Vietnamese Army pith helmet, worn by most men during my first visit to Hanoi in 1995, is also mostly gone.

I believe that the pedicab will not only make a comeback, but spread to other countries. Itâs not only cheap, but green, and takes very little to start up as a business. With just a few bucks and minimal training, you too can become a pedicab driver.

In 2001, one couldnât sit in a restaurant without being hounded, repeatedly, by lottery ticker sellers, wandering in off the street, but now, there are many fewer of them, and the beggars have nearly all disappeared.

HÃ , a 55-year-old domestic servant, informed me, â There are more jobs now, so people donât have to do that. There were also too many imposters, beggars who would sell the charity rice, then eat comfortably in a restaurant. They ate better than normal people!â

With a rising middle class, there is a rapidly increase demand for domestic servants, so many companies have sprung up to provide this service. You pay \$53 for up to three referrals. HÃ , âA servant makes \$176 to \$198 a month, but if you can speak some English, itâs double! You work 28 days a month, and get ten days off at Tet, at which time most Vietnamese employers will give you a bonus, plus bus fares to your home village.â

Gone are the days when an employer can scream at a domestic servant, hit her or lock her inside all week long. When not busy, HÃ  lounges on a leather couch to watch a Chinese, Korean, Indian or Vietnamese drama. A remake of an Israeli film, about a young man who found out his dad was actually a mafia boss, proved particularly popular.

Men at the economic bottom can work in factories or use their motorbikes as taxis. HÃ âs son is a long distance truck driver who earns \$440 a month. His wife farms a bit and does odd jobs. They have four kids. HÃ âs two daughters are divorced.

âIf you want work, you can find work. Of course, there are these drug addicts who rob and steal, but most of them die off by the time theyâre 30-something.â

Since you donât need to pay for rent and food as a live-in domestic servant, you can actually save from your \$200 salary. HÃ , âHousing in Hanoi has become very expensive. To get just a small room, with a shared bathroom, you must pay \$66 a month.â At the end of the spectrum, people are paying \$1,320 a month to send their kid to an English-language elementary school. As in the USA, the wealth gap here is staggering.

Since theyâre exposed to the intimate lives of both the rich and poor, domestic servants are the best source of information. Leery of this dirt dishing abilities, some wealthy Vietnamese are starting to hire Filipina servants, I kid you not, since they canât gossip to the neighbors.

Hungry, I stopped into an eatery for a plate of bÃ¡nh cuá»n, a sort of ravioli, then a bowl of bÃºn cháº£, rice vermicelli with pork. The food culture of Northern Vietnam suffered so terribly during those decades of hard-core Communism, it still hasnât quite recovered. In Saigon, you canât eat badly, no matter how humble the venue, but in Hanoi, a knowing eater will often be disappointed. My bÃ¡nh cuá»n and bÃºn cháº£, two Hanoi specialties, were fine, however, and my bill came to all of \$1.98. I found myself sharing a table with several strangers, with one man not even bothering to finish most of his meat, a sure sign that those harsh, near starvation years are long gone. 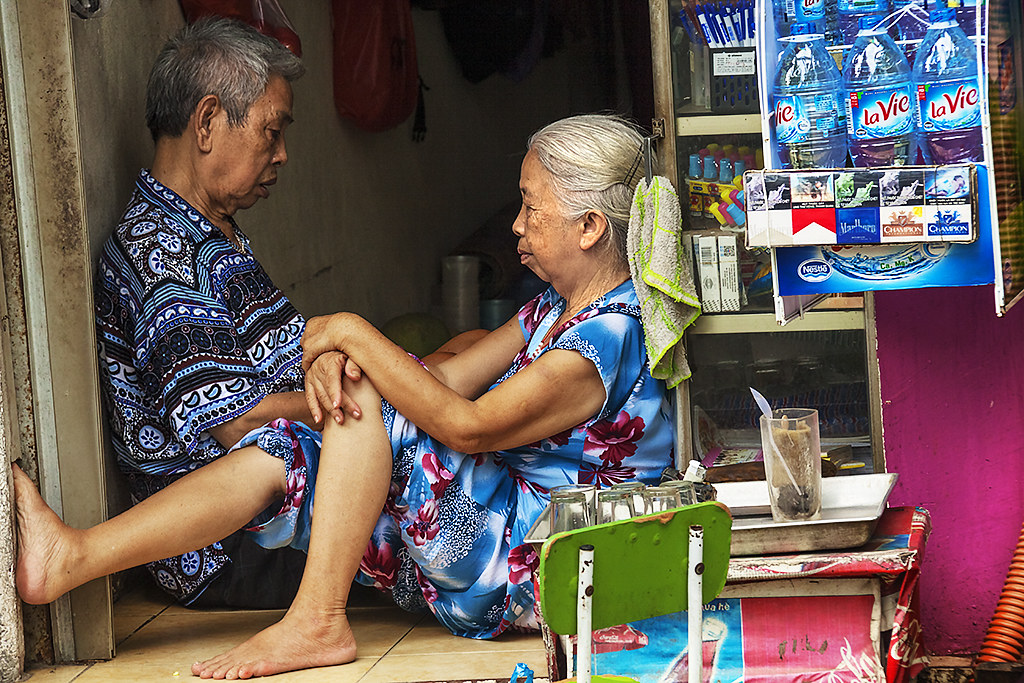 Since the food joint was near the lung hospital, a white haired patient ambled over in his blue and white hospital pyjamas, complete with a red cross over his heart. This sort of casualness is typical of Vietnam. On another day, I walked into a restaurant to find no one present, for the proprietor was taking her siesta in a little mezzanine. After coming down to make me an awful bowl of chicken phá», she went back to sleep, and I paid her by handing money between two balustrades on the mezzanineâs balcony. Though a crack in the strung up blanket, she reached out a hand, with her eyes still closed, Iâm sure.

Like the Chinese, Japanese and Koreans, Vietnamese consider their compatriots as not just belonging to the same race, but family, and in the most literal sense, too, for they call other Vietnamese, âÄá»ng bÃ oâ [âsame wombâ], which is derived from the Chinese, åè. This notion is obviously more myth than science, for the Vietnamese nation has absorbed plenty of foreign blood through the millennia, via the usual channels of conquest and immigration. Without the bonding concept of Äá»ng bÃ o, however, Vietnam would have disappeared eons ago.

Vietnamese citizenship, then, is much more than a legality, but established through the age-old recognition that people who appear similar and, even more importantly, speak the same language naturally belong together. Often, they must also fight together to resist being swallowed up or destroyed by another race. Race consciousness is at the heart of racial survival.

Infused with this knowledge, Vietnamese have never taken any internationalist ideology seriously, especially Communism, a nightmare dreamt up by rootless minds. Protective of family and race, of all those who came from the same womb, theyâve fought against the Chinese, Mongolians, French, Americans and even against each other, because, well, their foes were deemed as fraudulent Vietnamese. During the Vietnam War, no common North or South Vietnamese soldier was a traitor, however, because each believed he was fighting for Vietnam. 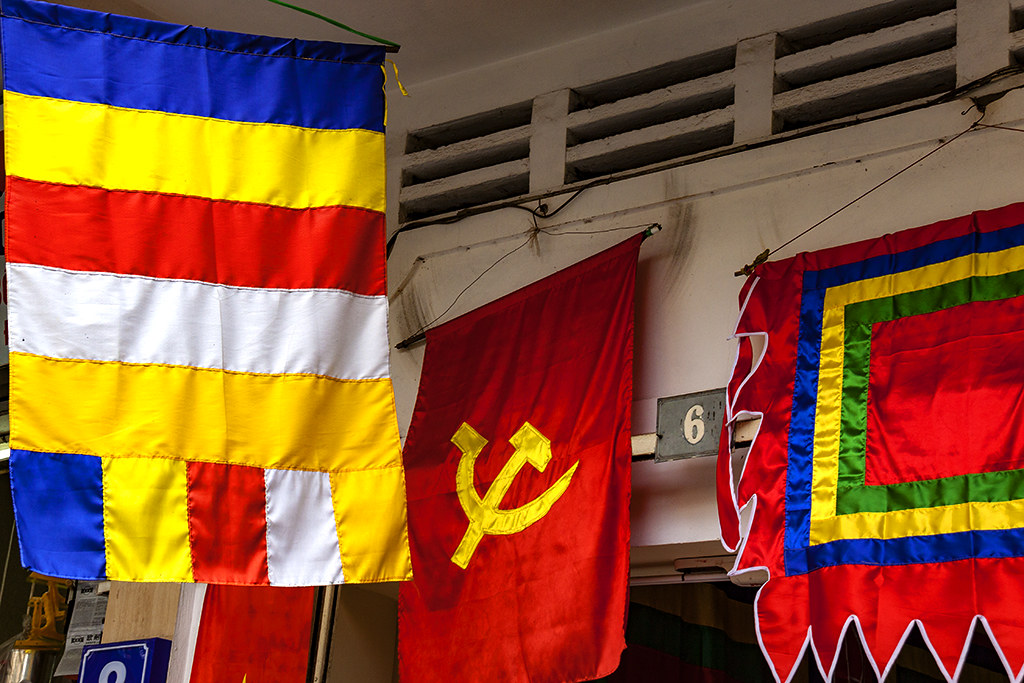 Though youâll find images of the hammer and sickle, Marx, Lenin and, of course, Ho Chi Minh throughout this country, there is nothing Communist or internationalist about Vietnam. As my Saigon-based American friend, Alec, points out, âThe US is more Socialist! At least the public schools there are free. Here, the government does nothing for the people!â What sustain Vietnamese, then, are family and friends, and, in time of war, a fierce recognition that their own survival is bound up with race.

Finishing this piece, I hear funeral music rising from the street, so I go onto the balcony to see two men, wearing white, walking backward in front of their mother’s hearse. In the light rain, three young musicians play the rice drum, oboe and the two-stringed ÄÃ n cÃ². Repeatedly assaulted by alien insanities, most Vietnamese haven’t forgotten what’s behind, under or inside them. ← Empire IdiotsHanoi Jottings →
Current Commenter
says:
Current Date at Time Now
Leave a Reply - Commenters who are not discussing the article, but are only indulging in ad hominem attacks, will not be tolerated.
Cancel Reply
Commenting Disabled While in Translation Mode