I painted houses for a decade, and on our crews, we always knew of each otherâs relative competence, willingness to work, sense of responsibility, substance addictions, if any, and, ultimately, character. My roommate, Jay, for example, really didnât give a fuck, for he was often late, but somehow always rehired, for our boss, Joe LeBlanc, was a softie. Once, Jay and I left our rather pitiful, unheated apartment at exactly the same time, yet Jay somehow managed to miss the bus, thus work for that day.

Chuck was a narcoleptic who had gotten into a car accident, so was more or less one-armed, but still, he was a pretty good worker, and always cheerful. Standing on a 40-footer, Chuck exclaimed, âHey, who farted?!â Many a poet have never come up with a more memorable instance of philosophy and wit. Pure Zen. If he hadnât wiped himself out, along with a car or busload of innocents, I hope Chuck is doing well.

Smooth was a junkie, so moved very slowly, hence his nickname. Joe paid him accordingly.

Laura could never make it up any ladder taller than herself, so only scraped or painted baseboards and first floor windows. In the kinder and gentler working environment of the 80âs and early 90âs, even a fat broad could join a housepainting crew.

Iâm sure I must have talked about at least some of the above characters, but as you get older, you repeat yourself, not because youâve run out of stories, far from it, but that some have imprinted themselves so strongly, to become iconic in your mind. Milan Kundera says that from all of our sexual experiences, only two or three encounters linger persistently. Something like that. Broke, I sold that book a long time ago.

Now that Iâm a foreman at a plastic recycling plant, memories and habits from my housepainting days return, and though Ea Kly is 10,000 miles from Philly, I can readily detect, once again, similar character types, as in who move fast and efficiently, who lumber along, and who are just faking it.

My brother in law brought me in so I could, in his place, observe what was going on, and immediately, I recommended letting a loafer go, and this even before I knew Tuan had a raging drinking problem. Like Joe LeBlanc, my brother in law is a softie, so he hesitated, but Tuan promptly fired himself this week. Hung over, Tuan missed two days without saying anything to me, and not only that, he drunkenly called our bookkeeper in the middle of the night to demand that he be paid in full immediately, for he was quitting. Sobering up, he came to me to apologize, but it was too late. âI have marital problems, brother Linh, and thatâs why I drink.â Much of the world, then, men and women, would be boozing nonstop. Even Tuanâs wife, Thu, who is also employed by us, is not defending this charming dude. 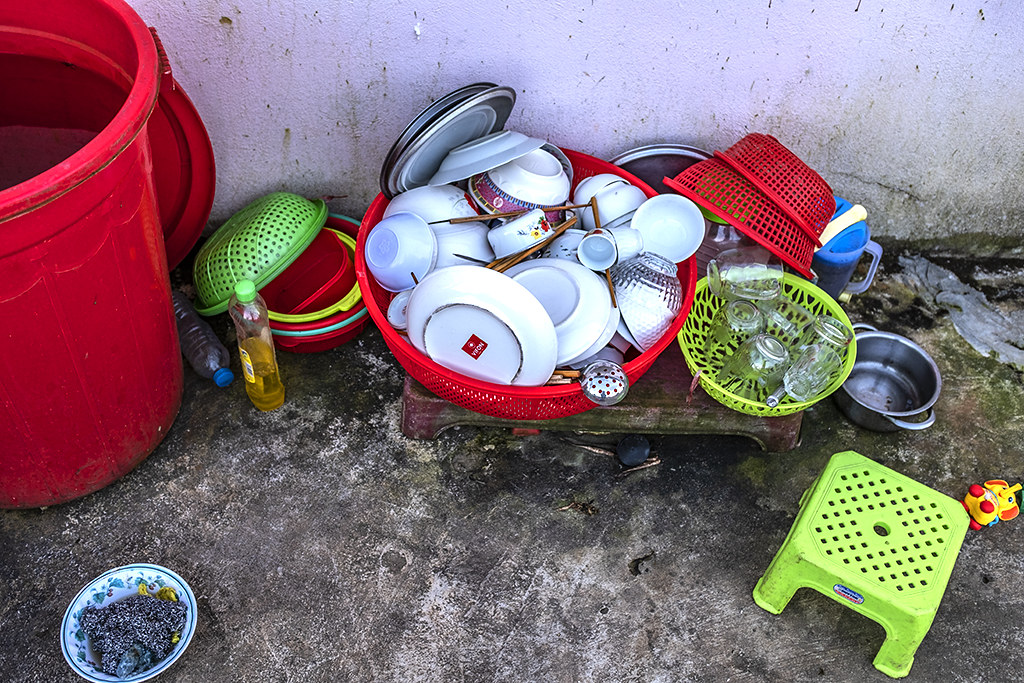 One of Thuâs duties is to cook for up to six people, whoever happen to live at the recycling plant at the time. We have an improvised kitchen of two hot plates. Lunch and dinner are served on the floor. The dishes are washed in a courtyard out back, with the pots hung up on a wire fence to dry. Twice a day, the neighborâs dogs drop by to eat our food scraps, and sometimes even a chicken forages around. The cow, love of my life, merely looks on.

My wife is in Saigon working for her sister. Our marriage is strengthened, or at least saved, by these spells apart. Knowing that Iâm alone, a few of our workers are joking that I should look for a local mate. While women like to gossip or fantasize about other people coupling, most men only conjecture themselves in action. Lien, a woman in her early 30âs, joked to me after work, âWe have a few middle-aged women here. You should get yourself one, uncle.â

âOh, Iâm old, sister, so I donât need an old woman. How tiresome is that?! I need someone young, even the youngest. Now, that would be a good match!â

I had no idea who Coi was, but I went along with it, âThat sounds great!â Just as in Philly, the Vietnamese working class will joke and banter most inappropriately, for it makes their long, exhausting day goes a little faster. 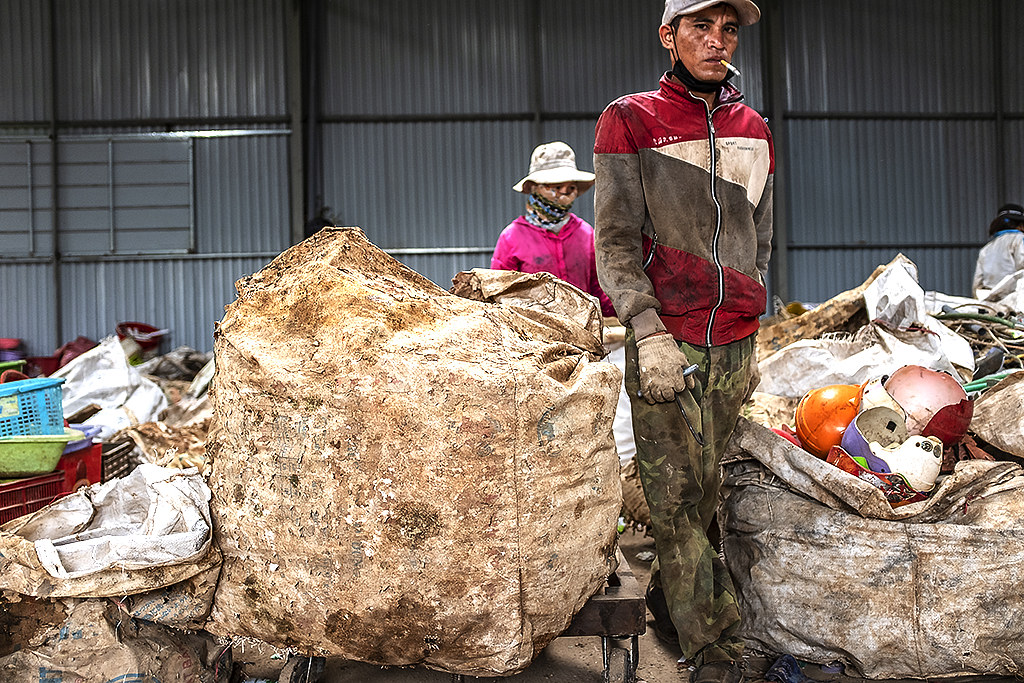 One of our best employees is Vinh, a mother of four. Tough and responsible, sheâs the perfect supervisor. At home, she grows a few crops, keeps a few goats, chickens and two cows. Eight days ago, she limped into work after hurting her foot doing some farm work. Take a few days off, we suggested, until you feel better, and when she didnât return after a week, a couple of us dropped by with a small gift of money, as is customary, to help Vinh recover. We have some sad houses in this village, and hers is among the most dismal, I was rather surprised to see, since I have talked to her boastful husband, Binh, a a few times. I thought they were we doing OK, at least.

Vinhâs two kids still living at home were dressed very shabbily, with the girl, about twelve, had on a dirty T-shirt with a smiling cartoon figure, with this bizarre English caption, âWhat Shall I Make for Dinner?â

We found Vinh bedridden, and about to go to the hospital. Binh whispered to me that his wife had âfemale problems,â a situation that had persisted for years, so itâs not the injured foot that had kept her home.

Within hours, however, I found out that there was a huge commotion at their miserable shack recently, that Binh had likely beaten his wife, as he has done many times before, and, moreover, that heâs a good for nothing who gambles compulsively, and thatâs why theyâre broke. Worse, theyâll soon be kicked off their small plot, since itâs slated for some development. Though theyâve been fairly compensated for it, that money is long gone, to pay off Binhâs gambling debts.

As we erected our factory, Binh came by in the middle of the night to steal some of our gravel, a fact overlooked by my brother in law, since he didnât want to make enemies among the locals.

Unlike the Vietnamese, the Rade are matriarchal, meaning women own and inherit all properties, and a husband must move into his in-lawsâ household, so there must be many Rade women who get to pummel their husbands.

Since there are Vietnamese laws against domestic abuses, Vinh can go to the authorities for help, but she doesnât want to see her asshole husband go to jail, thus breaking up the family. Plus, she wants to maintain a facade of marital concord, as if the entire village doesnât already know.

Some Vietnamese women take matters into their own hands, and this week, thereâs a news item about a Thanh Hoa woman who kept her husband in a cage for three years, for he was a heroin and crystal meth junkie who had often beaten her and their two kids, she defiantly explains to authorities. âI cured him.â She never mistreated him, she elaborates, for she always fed him properly, and even gave him a glass of beer with each meal.

Yesterday, we hired two new guys, and they both came in wearing brand new military uniforms, as if ready to shoot up the place. Vietnamese have the unenlightened and deplorable habits of judging people by how their look, so one guy would be said by most to âresemble an executive,â for his face is wide and robust, with regular and intelligent looking features. Although he doesnât seem stupid or like a beaten down coolie, heâs happy to be hired to do a very dirty, tiring and poorly paid job, but that, too, is hardly unusual in this upside down world. Some of the worldâs most undeserving are paid most handsomely.

Since some of the women here have matched me with Tiny, Iâve made it a point to not even look in her direction, since I donât want to creep the young lady out. I am married and try not to be an asshole. I do what I must, and for now, itâs returning to work. Grinding along, our machine breaks down hardy, eternal plastic. The men in military uniforms are covered in dust and grime, and so am I. Bent over, Tiny sweeps. Peak Buffet for Ungrateful Insensates
Linh Dinh
• 70 Comments • Reply
← Provincial TaxonomyMan, War and Nation →
Hide 91 CommentsLeave a Comment
"Whatever Your Hands Find to Do"
• 91 Comments
Commenters to Ignore
Commenters to ignore (one per line)