Belgrade, 2020
◄►Bookmark◄❌►▲ ▼Toggle AllToC▲▼Add to LibraryRemove from Library • BShow CommentNext New CommentNext New ReplyRead More
ReplyAgree/Disagree/Etc. More... This Commenter This Thread Hide Thread Display All Comments
AgreeDisagreeThanksLOLTroll
These buttons register your public Agreement, Disagreement, Thanks, LOL, or Troll with the selected comment. They are ONLY available to recent, frequent commenters who have saved their Name+Email using the 'Remember My Information' checkbox, and may also ONLY be used three times during any eight hour period.
Email Comment Ignore Commenter Follow Commenter
Search Text Case Sensitive  Exact Words  Include Comments
List of Bookmarks

Pandemic, lockdowns, riots, disappeared jobs, collapsed businesses, empty fridges, closed borders, weird explosions and, just now, Beirutshima, so 2020 is already a horror show, but wait, itâs actually a mousy prelude to the endlessly crashing cymbals, just ahead. Many more ambulances will howl down streets. The empire will only exit with a bang.

Meanwhile, all is still relatively calm in most places. I hear a child singing outside my basement window. Each afternoon, kids play in my buildingâs narrow courtyard, then disperse just before five, to head home for dinner.

To reach the front door the other day, I had to sidestep four boys playing cards. As I fumbled with the key, one kid looked up, frowned and said something that sounded like a correction. I ignored the pipsqueak, only to understand immediately that he meant, âItâs already open, dumbshit.â

To fuss over trivia is a peacetime privilege, or curse. Here in Serbia, they squirt ketchup on pizzas! Italy is nearby, but so what. Everybody and his Kalashnikov waving grandma have their own way of doing things. South Koreans eat pizzas with corn, and dill pickles on the side.

Yesterday, I met a 70-year-old architect whose name translates as Lucky Darling. Nearly every morning, Sretan can be seen outside a beauty salon. Since its owners are two striking beauties, it makes sense for the old fart to park himself there. Sitting at a table, Sretan sips coffee, looks at traffic and waves at neighbors. Around 11, he wanders to Kafe ParkicÌ.

My spot is Dzidzi Midzi, where, perched on the balcony overlooking the sidewalk, Iâm quite visible to passersby. Alien to a place, you wonât recognize anyone, but they all see you.

Although Serbia has reopened for tourists sans conditions, few have entered, and in HadÅ¾ipopovac, Iâm the only Martian. Itâs cool, though. Staring hard at me, a girl of about three smiled and waved, which brightened her mom also. 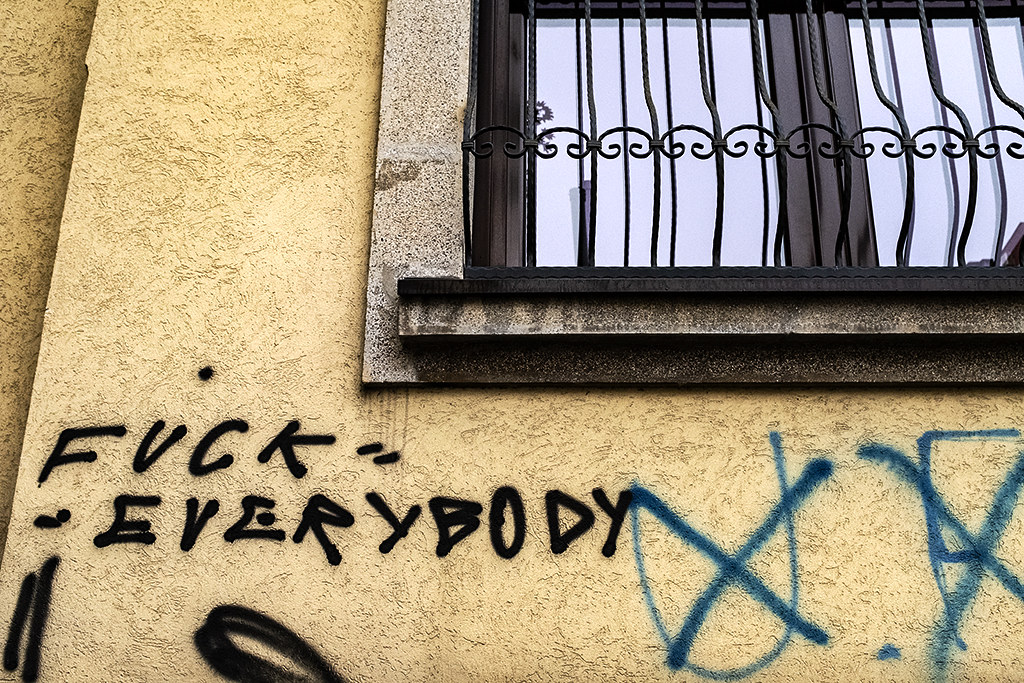 Despite their fearful reputation, Serbs are quite mellow, Iâve found. Yes, there is an edge here, as expressed by the graffiti, for example, with fans of Red Star and Partizan cancelling each other out all over town, and each time they clash, a riot is almost inevitable. Walking for miles across Belgrade, however, Iâve not felt anything like the tension or even menace thatâs become banal in American cities, with each morningâs newspaper yawningly reporting last nightâs carnage. My landlord never locks his house or car, he told me.

Vietnamese, too, are generally not aggressive. Save your butchery for when it really matters, tough guys. Queers strut.

In Busan, my friend Jung-min said, âWe Koreans have all been in the military, so we know how to use weapons, but when itâs over, we forget about it. When thereâs a war,â he chuckled, âwe can be quite brutal.â

Sretanâs English is not bad. His wife is a career diplomat. Together, they spent two years in Tokyo, three in NYC and four in New Delhi.

âNew York is fantastic. We lived in the middle. Sutton Place.â

âYes, very expensive, but my wife is a diplomat. I didnât have to do anything. I just walked around and looked.â

âWashington. We were there for 15 days. I didnât like it. Washington is like a village. New York, great.â

âIâve heard. Did you go to Chicago?â

âNo, but I know. Many Serbs there.â

When young, Sretanâs passion was karate, so Japan was particularly fascinating. Still, he disapproved of their lifestyle, âJapanese, all they do is sleep and work. No life.â He shook his head.

Opening a plastic container, Sretan offered me a baklava. âYou like? No pressure. You like?â

It was excellent, âThis is very good, and the coffee too.â

âI told you. I donât lie. Turkish coffee, but Serbian style. She knows how to make.â

âAh, butâ¦ Between Serbs and Croats, thereâs a complex. If I look at you and have a complex, then I hate you, but itâs nothing. Itâs in my head, my imagination. People have complex.â

Like all who grew up in poorer societies, Sretanâs teeth are not perfect. Mine are fourth world.

Sretan on America, âThey put pressure on every country. They bomb. Yugoslavia, your country. Saddam Husseinâ¦â 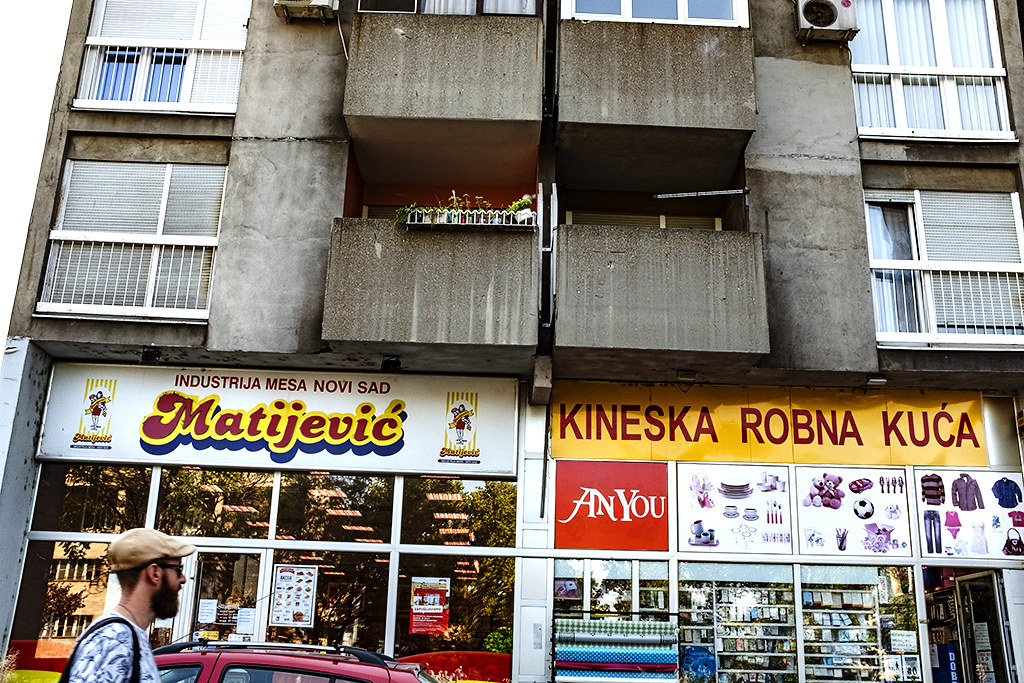 Kina is China, of course. I picked that up just from walking around. Kineska robna kuÄa is a store selling made-in-China household goods. Kineski restoran is a monosodium glutamate factory. 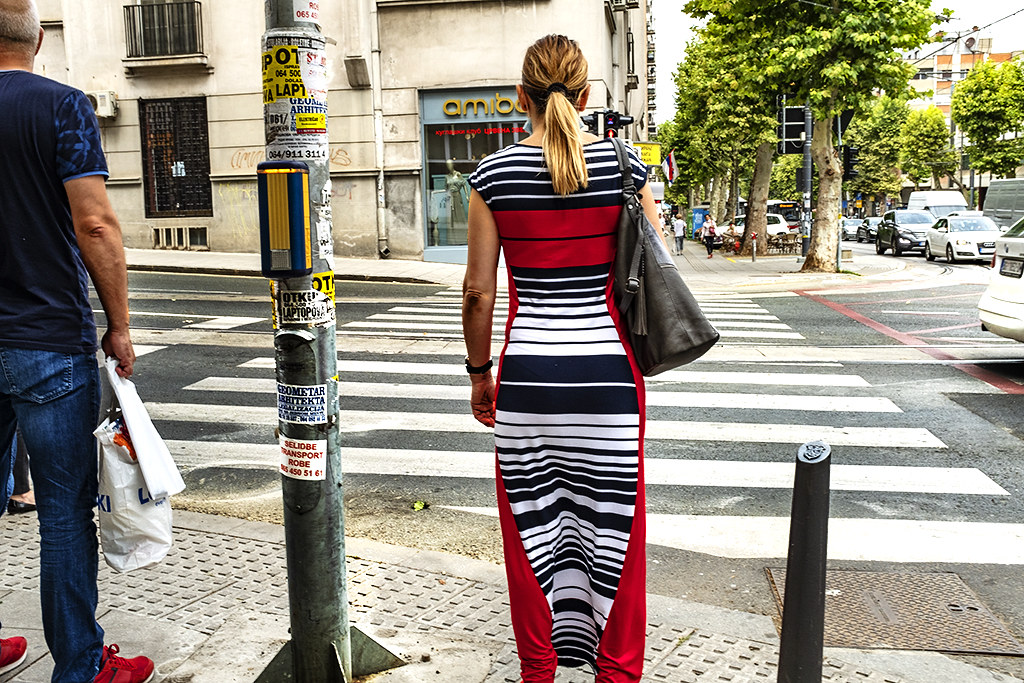 Seeing a slim lady in black and white horizontal stripes, framed by body hugging red, I immediately thought, This is why you left your room today. Sheâs like an upright zebra crossing for sleepy lizards.

The many used clothing stores are dressed up with the English âSecond Hand,â often coupled with Butik. When I was in Ukraine in early 2016, used clothing was sold in huge mounds, for shoppers to dig through. Havenât seen that here. 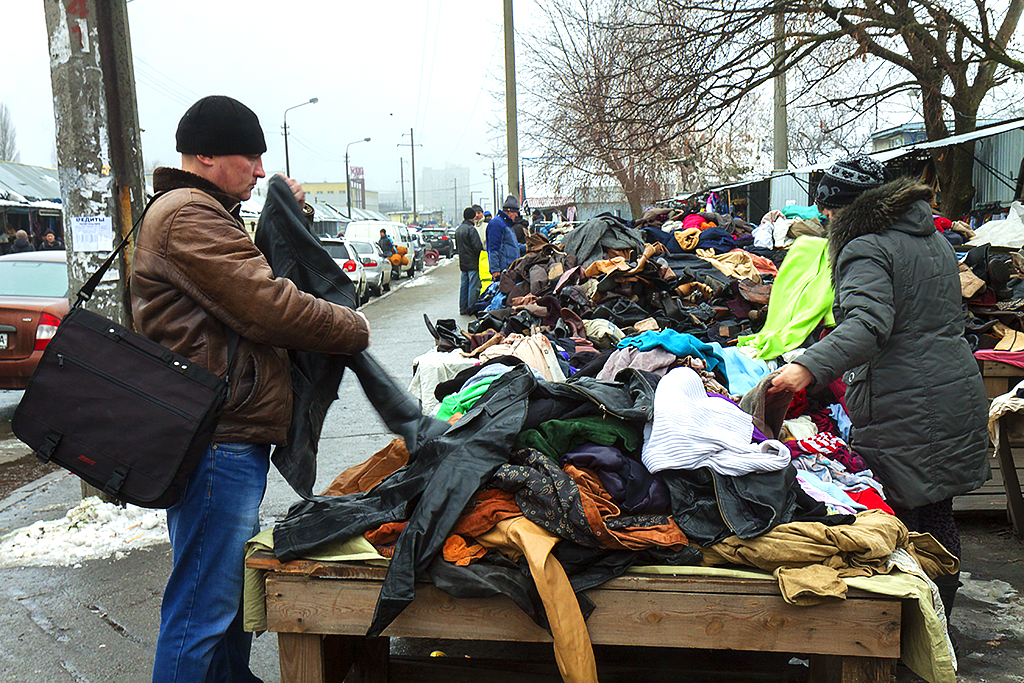 In Kiev, I saw beggars kneeling under snowfall, heads drooping, behind soggy cardboard signs. They had just been color revolutionized by Uncle Sam. In Belgrade, beggars arenât nearly as abject. Many are gypsies.

In plastic sandals and pink sweat pants, a scrawny teenage girl meandered into a pizza joint to mumble at each table. Itâs called Poncho, oddly enough. Offering no burritos or tacos, it does have cacti painted on its walls. Its logo is a Mexican with a bulbous nose, handlebar moustache and a sombrero sagging over his eyes.

There are many gambling parlors here, an index of desperation, and even more Western Union outlets. Folks in each neighborhood need to easily collect cash from relatives overseas.

Like all of Eastern Europe, Serbia is hemorrhaging people like thereâs no tomorrow. At least seven hundred thousand Serb live in Germany. Moldova has lost a third of its population since 1989!

One day on the street, a very cosmopolitan Serb gave me his thoughts on this issue, and more. Seeing me photographing, he started to talk, for he, too, had a camera. Also, he likely assumed I was Chinese. Turned out he had spent a year there.

âWhat were you doing there?â

âStudying the language. Iâm a translator.â His English was excellent and practically accent-free.

âHave you been to the States?â

âNo. I got a visa but I never went.â

âItâs not the same any more. Itâs ruined. Still, you should go and have a look. Have you traveled a lot?â

âSome. Itâs not easy for Serbs to travel. Just stopping at an airport, you have to pay for a transit visa. One year, I went to Brazil, but the transit visa for the UK was so high, I had to pick a different flight.â

âIt is ridiculous. When I was in middle-school, we loved British culture and British music, but the UK is not very welcoming to us Serbs.â

âSo where do they go?â

âGermany, Switzerland, Austria, France. Many young people are leaving. Here, you can only make 500, 600 Euros a month, so after you pay for food and rent, thereâs nothing left. Thereâs no future here. You can only live day to day.â

To make things worse, thereâs the coronavirus, but thatâs a universal problem. Tourism is comatose everywhere.

When Middle Eastern, North African and South Asian refugees swarmed over from Greece five years ago, they marched right through North Macedonia and Serbia.

âWe used to see them on the highways, with backpacks. I talked to some of them. One man asked me, âWhatâs better, Germany or Austria?ââ My instant friend cracked up. âThey had walked all the way here from Asia, but they didnât know exactly where they were going.â

To reach Austria, they still had to cross Hungary, however. âThe Hungarians were tough. The border guards would beat them, so they had to dig tunnels.â

âBut what happened on the other side? Itâs not like they fitted in.â

Even though his English was clearly flawless, I was still surprised by his use of coyotes. Some people just have supremely quick twitching synapses, man, while the rest of us must rely on miniature ox carts, bogged down by mud, prejudices and clichÃ©s, between our frayed neurons.

To escape Turks, Serbs themselves migrated en masse to Hungary in the 17th and 18th centuries, but there are key differences, no? You tell me!

My instant friend remembered a trip to Switzerland, âIn a restaurant, I met a Dutch couple. I also speak Dutch. When the man found out I was a Serb, he looked at me like I was a monster!â He laughed.

âHe probably thought you were, like, a mass rapist!â

âAnd a mass killer! Dutch people, how should I say it, theyâre very righteous, you know. Theyâre even worse than Germans!â

âYes, but Germans are righteous against themselves. The most righteous Germans hate being German!â

We had a good laugh over that. It was time to go, so I stuck out my hand.

âNo, we will not shake hands!â 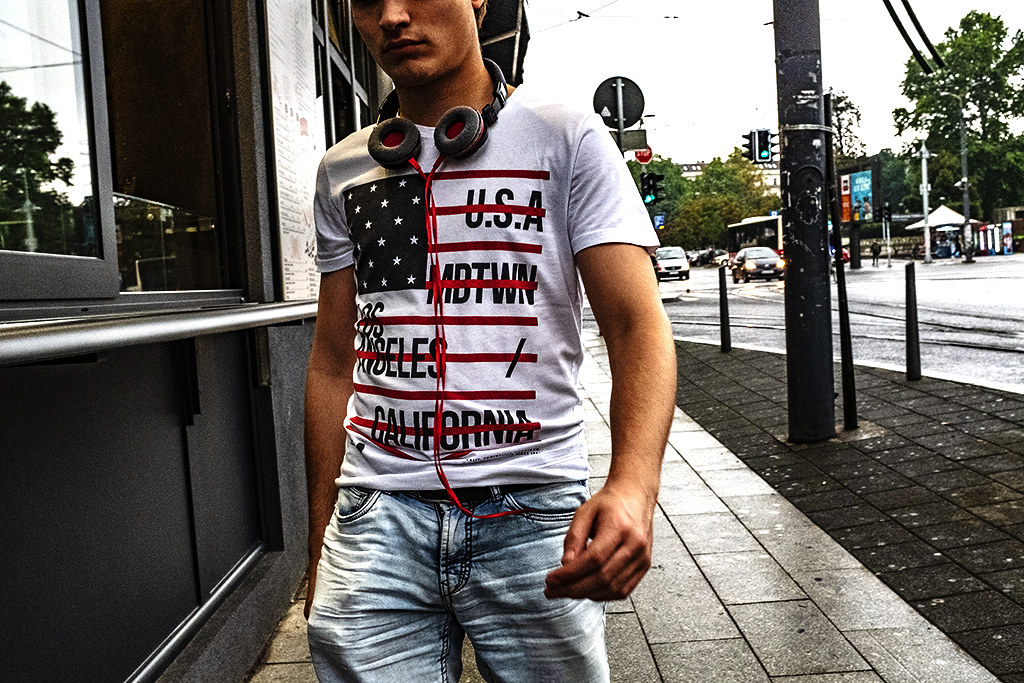 After 16 days in Belgrade, I finally spotted an American flag on someoneâs clothing. In most foreign cities, Iâd catch that several times a day. The wearer was a teenager, so born after American bombs exploded in his city.

It had 18 stars and 17 stripes, so both present and past had been tampered with, a common enough occurrence, though not usually so harmless.

U.S.A. MDTWN LOS ANGELES / CALIFORNIA was superimposed in black. NYC and LA are mythical destinations. Thanks to Hollywood, their color saturated, larger than life images have become parts of everyoneâs consciousness, subconsciousness and memory, to flare up as teasing dreams.

As the American dream is snuffed out in situ, it persists as a quasi-religion outside it. Uncle Samâs sexy fantasies about himself lord over foreign minds. The NY logo is the worldâs most popular icon. Meanwhile, the country sinks into degradation and farce.

Crotch grabbing Michael Jackson feared actual sex, granite-jawed Bruce Jenner is a cleavage and leg flashing grandma, a casino hustler and reality TV star tweets as the president, Joe Biden never perks up unless thereâs a squirming girl within stroking distance, and yet, even here in Belgrade, books by Michelle Obama sell.

Itâs already 11 and I havenât been outside yet. Done with this article, Iâll reward myself with a huge slice of pepperoni with mushroom at Poncho. The long stroll down there will be pleasant. From the most hideous apartment buildings will step the most lovely people.

At the corner, Iâll likely run into Sretan. âCome to my building and ring the intercom,â he has said. âIf Iâm home, you can come up and weâll drink coffee.â

Iâll bring a bottle of Å½drepÄeva Krv. From his roof, we can look down at a still calm universe. • Replies: @Korenchkin, @Sya Beerens
• Replies: @FB, @Sya Beerens
← Balkans Ahead!Heritage Is Home →
Current Commenter
says:
Current Date at Time Now
Leave a Reply - Commenters who are not discussing the article, but are only indulging in ad hominem attacks, will not be tolerated.
Cancel Reply
Commenting Disabled While in Translation Mode