Skopje, 2020
◄►Bookmark◄❌►▲ ▼Toggle AllToC▲▼Add to LibraryRemove from Library • BShow CommentNext New CommentNext New ReplyRead More
ReplyAgree/Disagree/Etc. More... This Commenter This Thread Hide Thread Display All Comments
AgreeDisagreeThanksLOLTroll
These buttons register your public Agreement, Disagreement, Thanks, LOL, or Troll with the selected comment. They are ONLY available to recent, frequent commenters who have saved their Name+Email using the 'Remember My Information' checkbox, and may also ONLY be used three times during any eight hour period.
Ignore Commenter Follow Commenter
Search Text Case Sensitive  Exact Words  Include Comments
List of Bookmarks

Wandering around Belgrade, I ran into the Hells Angels of Serbiaâs clubhouse. I tried its door to find it locked. Weeks later, I discovered the Hillbillies MCâs pub, so I went in, had a couple beers and looked around. Their logo featured a bearded, smiling skull in front of red wings. 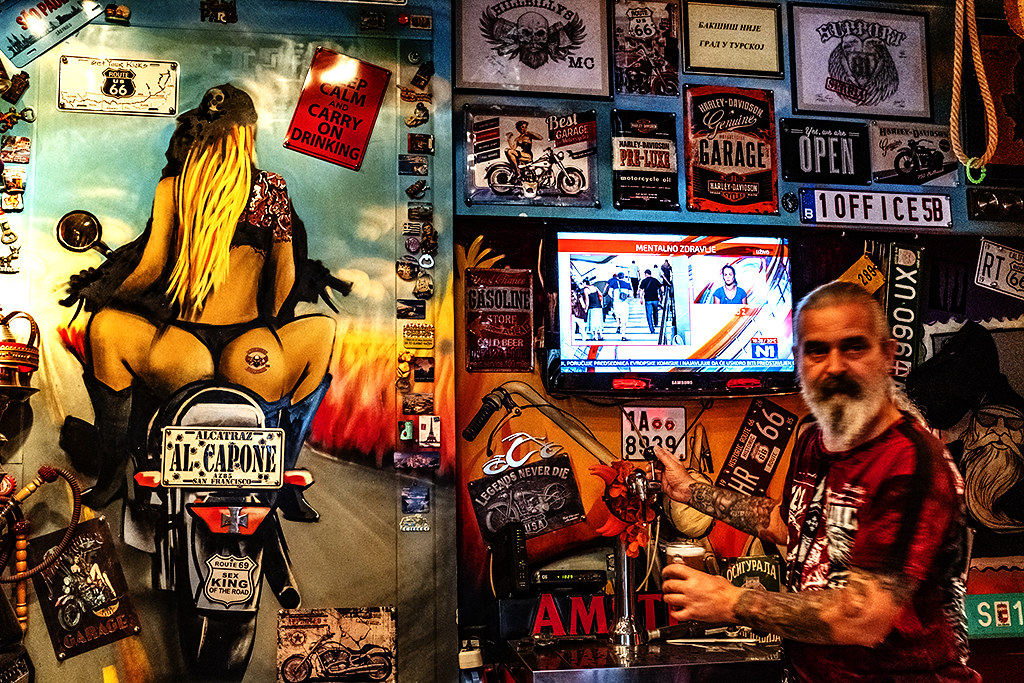 Most of the âdoom crewâ were middle-aged, hirsute and tattooed. The owner wore his salt-and-pepper hair in a pony tail. Over the bar was a painting of a near naked chick draped over a bike. From a wall, Motorheadâs Lemmy stared everyone down, looking badassed in his black cowboy hat. Most tellingly, just about every sign, message, slogan or joke was in English. âKEEP CALM AND CARRY ON DRINKING.â âLEGENDS NEVER DIE.â âROUTE U.S. 66.â âROUTE 69 / SEX KING OF THE ROAD.â

Now nearly anyone anywhere can sort of become anything, so why not be an American redneck, black rapper or Warholian metrosexual, etc.? It wasnât that long ago when only a few could even choose a different colored shirt. 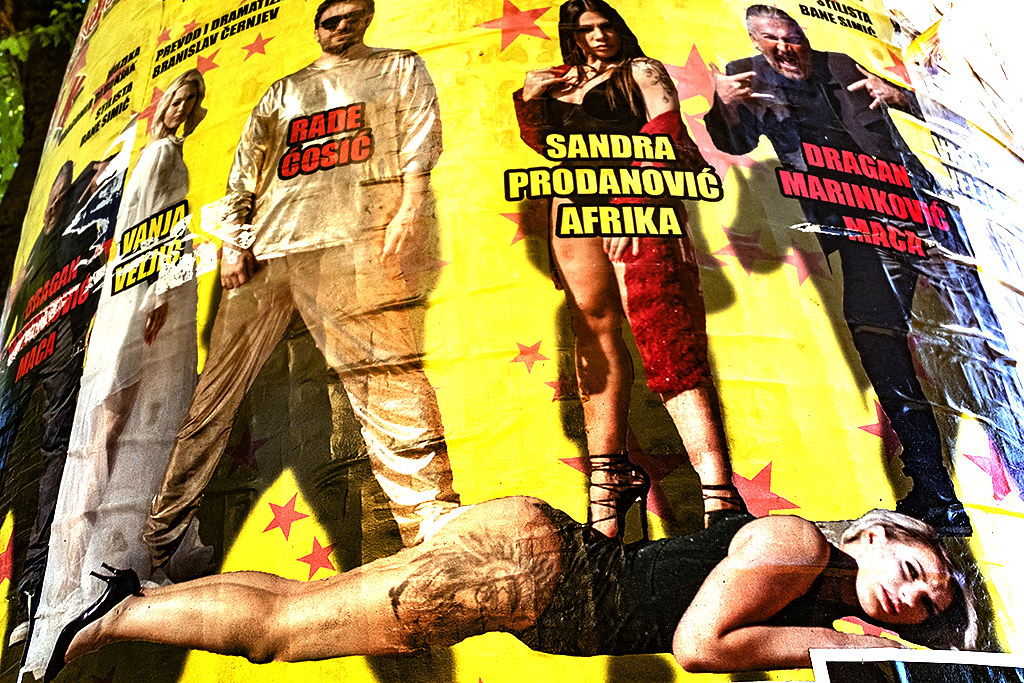 A nation can also undergo an extreme makeover, such as after an invasion, revolution or liberation. In the weird case of North Macedonia, its capital got a lurid facelift under the direction of prime minister Nikola Gruevski. With Skopje 2014, dozens of pseudo Greek buildings and hundreds of Hellenic statues were plopped onto the nationâs capital, as if by a drunken Zeus.

In this country of two million, at least two thirds are Slavs, with most of the rest Albanians, Turks and Gypsies. There are few Greeks. Still, downtown Skopje is now jammed with fluted columns, voluted capitals, acanthuses, pediments and friezes, with everything huge and towering, if only made of concrete and not marble. Itâs everything Greek super-sized, but done on a budget. 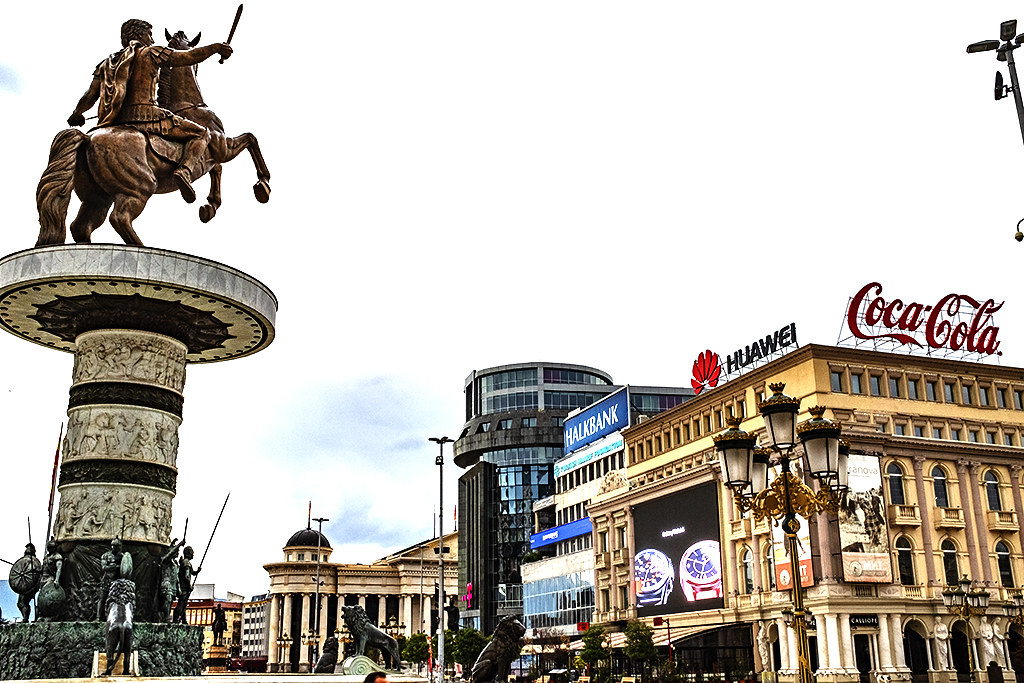 Half a kilometer away is a giant statue of Philip II, and he, too, is atop a column in the middle of a fountain, with warriors and lions. At its base, Philip reappears with Olympias and a boy Alexander.

Nearby, thereâs a fountain dedicated just to Olympias, but with four women shown, itâs not clear how. Three are pampering children. One is pregnant. To blunt Greek charges of cultural appropriation, it was briefly renamed Fountain of the Mothers of Macedonia. 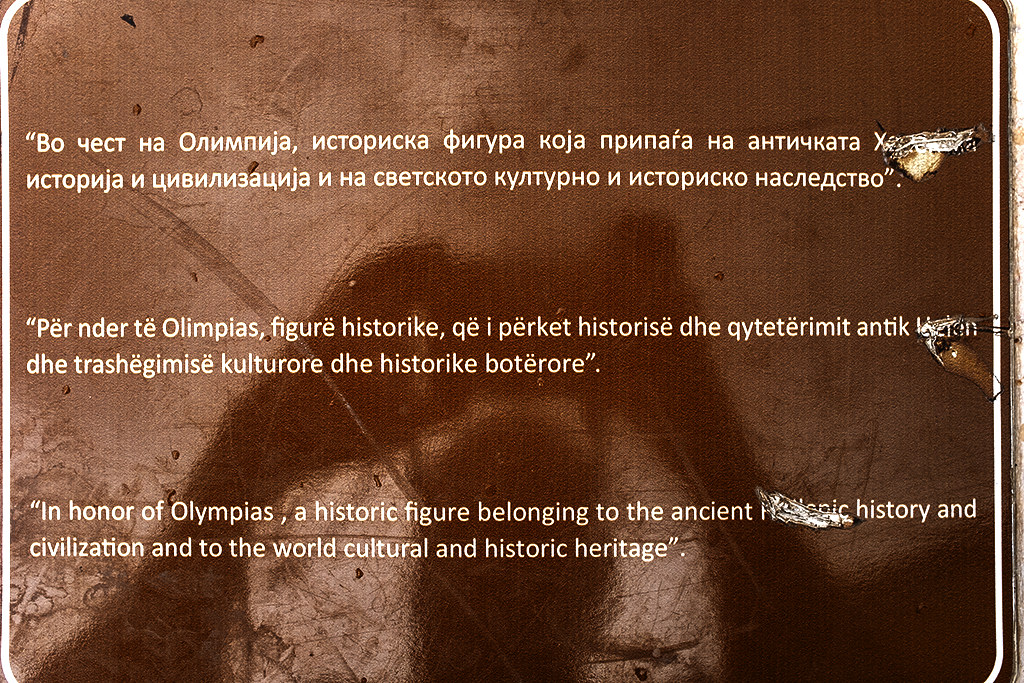 Now, thereâs a backtracking, appeasing plaque, âIn honor of Olympias, a historic figure belonging to the ancient Hellenic history and civilization and to the world cultural and historic heritage.â Far from exuding pride, it sounds like lawyerspeak. Similar plaques front other statues, with âHellenicâ sometimes scratched out by pissed locals.

Why celebrate Olympias at all? Perhaps unfairly, sheâs best known for sleeping with snakes. Plutarch, âOnce, moreover, a serpent was found lying by Olympias as she slept, which more than anything else, it is said, abated Philipâs passion for her; and whether he feared her as an enchantress, or thought she had commerce with some god, and so looked on himself as excluded, he was ever after less fond of her conversation.â Youâd be abated too, buddy. Worse, she may have been complicit in Philipâs assassination.

Although Skopje statues do honor Macedonian, Bulgarian, Albanian, Serb and Byzantinian heroes, the main spotlights shine on Alexander. Skopjeâs airport was also named Alexander the Great. Itâs odd that 21st century North Macedonians should identify with Alexander at all. Their language is basically Bulgarian. If a drunk shepherd from eastern North Macedonia strays into Bulgaria, heâs completely understood, but not if he staggers into Greece.

Also, Alexander during his time was mostly feared and despised by Greeks, for he massacred so many of them. When the Branchidae in Persia welcomed conquering Alexander as a fellow Greek, he promptly slaughtered them. Many Greeks fought against Alexander, even as mercenaries for the Persians.

Drunk, vain, touchy and paranoid, Alexander didnât hesitate to kill his generals, soldiers, body guards, pages or court historian. Alexander murdered Cleitus, who had saved him in battle. When his lover, Hephaestion, died, Alexander blamed it on the deceased manâs physician, so Glaucias was impaled, a Persian practice that disgusted Macedonians and Greeks alike.

When Alexander died, Greeks rejoiced, but now heâs one of their greatest heroes, and a towering presence to most Westerners, for he pushed back the Persians. Without Alexander, our entire world would be less Greek (thus less Roman), and more Persian, but is that bad? Imagine history without Jesus, at least not on the cross, but perhaps impaled? When Alexander torched Persepolis in 330BC, centuries of knowledge went up in smoke.

It was retribution for the Persiansâ burning of Athens in 480BC. Plus, Alexander had encountered this when he entered the magnificent Persian city, âAt this point in his advance the king was confronted by a strange and dreadful sight, one to provoke indignation against the perpetrators and sympathetic pity for the unfortunate victims. He was met by Greeks bearing branches of supplication. They had been carried away from their homes by previous kings of Persia and were about eight hundred in number, most of them elderly. All had been mutilated, some lacking hands, some feet, and some ears and noses. They were persons who had acquired skills or crafts and had made good progress in their instruction; then their other extremities had been amputated and they were left only those which were vital to their profession. All the soldiers, seeing their venerable years and the losses which their bodies had suffered, pitied the lot of the wretches. Alexander most of all was affected by them and unable to restrain his tears.â (Diodorus Siculus)

Few lives change nearly every other. Plus, overwhelming power awes, mesmerizes and seduces, as long as youâre not threatened, that is. Alexander will forever fascinate, as will Quin Shih Huang, Genghis Khan, Charlemagne or Napoleon, etc. AAA males are so rare, how can us tick-like wusses, fearful of our own shadows even, not buckle our knees?

Another reason for North Macedoniansâ identification with Alexander is our basic need to feel intrinsic to a place, because itâs jarring to admit weâre just squatters, more or less, anywhere.

In Belgrade, a woman told me Serbs sprung from the VinÄa Culture, which dates to 5700BC, so her ancestors didnât only arrive in the Balkans in the 8th century, after all. Theyâve always been there. She also claimed there were Serbs among Alexander the Greatâs troops, with many of their descendants now living in Pakistan.

In Laos, there are hundreds of huge, ancient stone jars half buried in the ground that canât be linked to current Laotians, but still, theyâre proud. Vietnamese identify with 2,600-years-old bronze drums they canât explain.

Skopje has been inhabited for at least 6,000 years, but there have been so many wars, not to mention earthquakes, few old structures remain. There are beautiful mosques, with their mixed stone and brick walls, and stately stone minarets, so unlike the newer concrete ones. Less constrained by cost and gravity, theyâve become thinner and taller. Haughtily, they starkly rise. 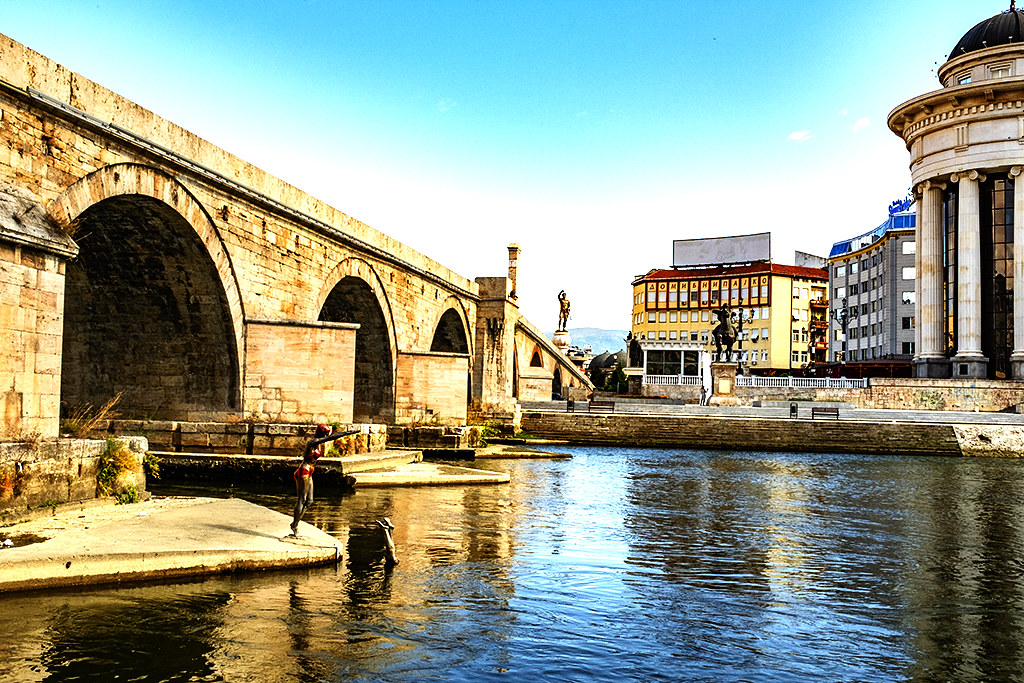 Thereâs a large 15th century Turkish bath, with its gorgeous booblike domes. Spanning the Vardar (or Axios as mentioned by Homer), thereâs a 702-foot-long, 13-arched stone bridge, built by the Ottomans no later than 1469. A plaque on it commemorates the 1689 impalement of Petar Karposh, a local Slav rebel. Thereâs also an equestrian statue of him, next to the bridge.

Crossing it often, Iâve come to recognize its beggars. One man has bulging, nublike feet, which he sticks out. There is a Gypsy boy, undersized but no older than six, who always wears a FC Barcelona jersey. An older boy has piercing and alert eyes, darkly rimmed.

The Old Town boasts new storefronts, so doesnât look too ancient, but if you study the more seasoned flagstones on its lanes, you can see the cracks, cavities and slightest indentations left by so many feet down the centuries. Nobodies, we too leave our marks.

Never bombed, Pragueâs historical center is magnificent, a bitter reminder of what much of Europe has once been. Haplessly resurrecting this hard-earned splendor, Skopje has become a joke, but whatâs done is done. Leave it, and let the world come and witness, before the cheaply built monuments peel, flake, crumble and collapse. ← Aleksandar of MacedoniaRed Redux? →
Current Commenter
says:
Current Date at Time Now
Leave a Reply - Commenters who are not discussing the article, but are only indulging in ad hominem attacks, will not be tolerated.
Cancel Reply
Commenting Disabled While in Translation Mode