Camden Tent City, 2009
◄►Bookmark◄❌►▲ ▼Toggle AllToC▲▼Add to LibraryRemove from Library • BShow CommentNext New CommentNext New ReplyRead More
ReplyAgree/Disagree/Etc. More... This Commenter This Thread Hide Thread Display All Comments
AgreeDisagreeThanksLOLTroll
These buttons register your public Agreement, Disagreement, Thanks, LOL, or Troll with the selected comment. They are ONLY available to recent, frequent commenters who have saved their Name+Email using the 'Remember My Information' checkbox, and may also ONLY be used three times during any eight hour period.
Email Comment Ignore Commenter Follow Commenter
Search Text Case Sensitive  Exact Words  Include Comments
List of Bookmarks

Indoctrinated for decades by relativism, weâre supposed to consider all life styles equal and never pass judgments. There must be legitimate reasons for a culture to embrace, for example, child marriage, bride kidnapping, female circumcision, Oprah Winfrey, or universal, all day long access to pornography.

Shit, though, is a hard sell, thus open sewers or public defecation donât have too many fans. In An Area of Darkness (1964), however, V.S. Naipaul describes one, âIndians were a poetic people, he said. He himself always sought the open because he was a poet, a lover of Nature, which was the matter of his Urdu verses; and nothing was as poetic as squatting on a river bank at dawn.â The subject is a young, handsome and elegantly dressed Muslim student at âa laughable institute of education.â

With such an attitude not rare, apparently, Naipaul found âIndians defecating everywhere, on floors, in urinals for men (as a result of yogic contortions that can only be conjectured). Fearing contamination, they squat rather than sit, and every lavatory cubicle carries marks of their misses. No one notices.â

In 1990, 75.1% of Indians were defecating in the open, but by 2015, only 44.4% were, so there is progress (or regression, if youâre into venting your root chakra in the morning sun, with the birds singing, as a freight train comes into view). Counting also Indians who must use a pit, body of water or shared latrine, then itâs 56%. In 1925, Mahatma Gandhi wrote:

I learnt 35 years ago that a lavatory must be as clean as a drawing-room. I learnt this in the West. I believe that many rules about cleanliness in lavatories are observed more scrupulously in the West than in the East. There are some defects in their rules in this matter, which can be easily remedied. The cause of many of our diseases is the condition of our lavatories and our bad habit of disposing of excreta anywhere and everywhere.

In 2007, poet Vivek Narayanan wrote me from India:

The rows of shitters I pass on my morning run by the sea here in Madras (yes, not far at all from the very same marina where once Naipaul ogled, unflinching, a certain G-string) are all surly men, some with little cigarettes or joints hanging from their mouths.

I understand well the happiness and relief they must feel in being able to take their morning shits right by the waves, facing the rising sunâalthough I don’t enjoy coming back from the run with the inevitable bits of human excreta sticking to my shoe.

The West itself has come a long way in regard to cleanliness. In The Road to Wigan Pier (1935), George Orwell talks about the undeniable stench of poor Englishmen:

Of course, as a whole, they are dirtier than the upper classes. They are bound to be, considering the circumstances in which they live, for even at this late date less than half the houses in England have bathrooms. Besides, the habit of washing yourself all over every day is a very recent one in Europe [â¦] But the English are growing visibly cleaner, and we may hope that in a hundred years they will be almost as clean as the Japanese.

The lavatories are in the yard at the back, so that if you live on the side facing the street, to get to the lavatory or the dust-bin you have to go out of the front door and walk round the end of the blockâa distance that may be as much as two hundred yards; if you live at the back, on the other hand, your outlook is on to a row of lavatories.

Imagine having to routinely run the length of two football fields just to take a dump! So 83 years ago, most Englishmen had no toilet in their home, just like contemporary India, and Orwell gave them a century to be nearly as clean as the Japanese.

Spoiled by modern plumbing and sewerage, most Americans would find Jonathan Swiftâs âA Description of a City Showerâ hardly believable:

Now from all parts the swelling kennels flow,
And bear their trophies with them as they go:
Filth of all hues and odors seem to tell
What street they sailed from, by their sight and smell.
They, as each torrent drives with rapid force,
From Smithfield or St. Pulchreâs shape their course,
And in huge confluence joined at Snow Hill ridge,
Fall from the conduit prone to Holborn Bridge.
Sweepings from butchersâ stalls, dung, guts, and blood,
Drowned puppies, stinking sprats, all drenched in mud,
Dead cats, and turnip tops, come tumbling down the flood.

But thatâs London in 1710. By 1855, the River Thames was roiling with shit, as testified by scientist Michael Farraday, âNear the bridges the feculence rolled up in clouds so dense that they were visible at the surface, even in water of this kind [â¦] The smell was very bad, and common to the whole of the water; it was the same as that which now comes up from the gully-holes in the streets; the whole river was for the time a real sewer.â With three million people, London was the largest city ever, so it faced unprecedented problems.

The sanitation crisis culminated in the Great Stink of 1858, but from it, the English did manage to think and muscle into being a comprehensive sewer system that functioned well from 1875 onward, a feat that eludes many nations today.

Without a toilet, your whole life is a mess. âOut of Orderâ:

Girls who donât have decent toilets at school or near home have to defecate in the open or use unsafe, unhygienic toilets, often shared with boys. Aside from the health risks, this is uncomfortable, embarrassing and puts them at risk of verbal or even physical abuse. To avoid the experience, they will often avoid eating and drinking during the day, making it hard to concentrate at school. Once they start their periods, girls are more likely to miss classes or drop out if there is not a decent toilet at school. In Sub-Saharan Africa, one in ten girls miss school during their period.

With such poor sanitation, Sub-Saharan Africa also leads the world in deaths by communicable diseases, which also shows up as having the shortest life spans. Of the 25 worst countries by this measurement, 24 are in Sub-Saharan Africa, with the lone exception war-torn Afghanistan.

In 1900, global life expectancy was just 31 years, and 48.5 for citizens of the most powerful empire, British, so everyone is living longer, as well as having more cars, cellphones and toilets, etc., but donât expect these trends to continue. With resource depletion and population overshoot, there will be fewer pots to piss in as this fornicating, defecating boat lurches forward. 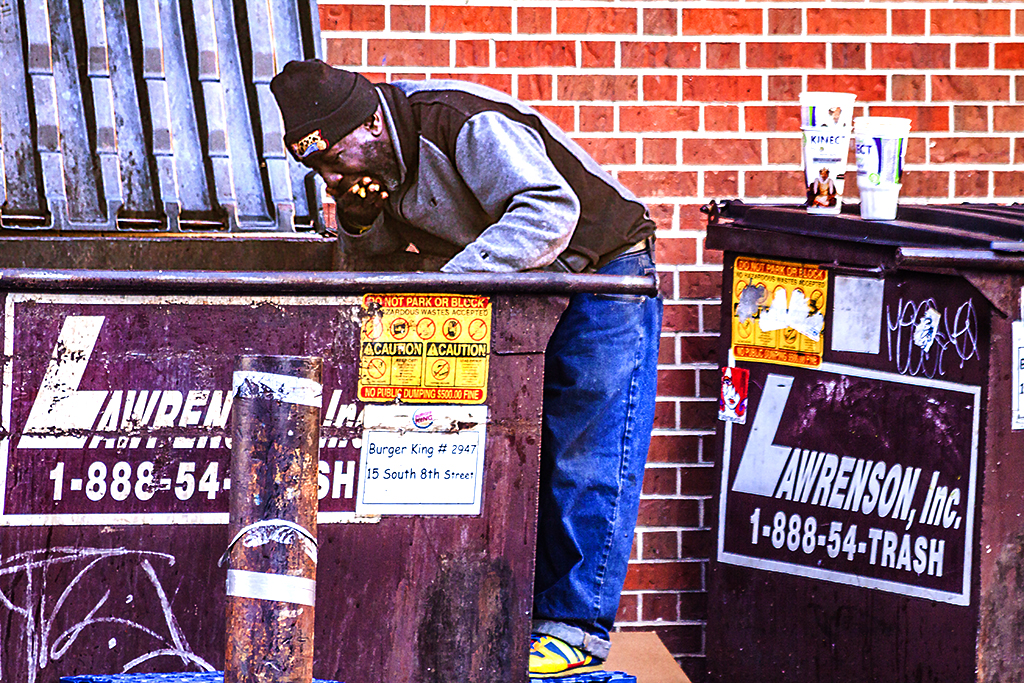 All over the US, destitution and squalor are encroaching, with tent cities sprouting all over. In Philly, there are encampments on Kensington sidewalks, and across the river in Camden, there are several tent clusters. Visiting one repeatedly several years ago, I saw just one honey bucket for over a hundred people. It stank so much, I suspected many were just using the bush, so yes, many Americans also lack proper toilets, and if you have passed through Los Angelesâ Skid Row or San Franciscoâs Tenderloin, just to cite two famous examples, you know exactly what Iâm talking about.

Coming to the States as an 11-year-old, I gradually learnt that âshitâ is much more common in American English than Vietnamese, as in âdumb shit,â âI must get my shit togetherâ or âyouâre shitting me.â Though common in daily life, shit is hidden, so it must seep out in language, and since Americans rarely see excreta, they make it nearly ubiquitous in conversations. Vietnamese donât have this compulsion and, soon enough, neither will Americans.

In the landscapes of science fiction dystopias, youâll find many broken, smoldering skyscrapers that are still picturesque, but few hints of the staggering filth awaiting us. In Mike Judgeâs Idiocracy, however, thereâs a Great Garbage Avalanche of 2505. Iâm certain, though, the shit storms will hit us much sooner.

Idiocracyâs premise is that society will become ever crasser and more dysfunctional since stupid people are outbreeding the smart. Itâs not very progressive, this vision, since each child, weâre repeatedly told, is a blank slate, with roughly equal potentials. Genes count for next to nothing. Only the environment matters. Likewise, there are no smart or stupid populations. If you agree with Judge, however, the fact that the most assbackward societies are outbreeding advanced ones can only mean this entire world will be flushed down the toilet.

OK, enough of this shit. Iâm going across the street to get shit faced and talk shit. Iâve earned my shit for the day.