TepotzotlÃ¡n, 2017
◄►Bookmark◄❌►▲ ▼Toggle AllToC▲▼Add to LibraryRemove from Library • BShow CommentNext New CommentNext New ReplyRead More
ReplyAgree/Disagree/Etc. More... This Commenter This Thread Hide Thread Display All Comments
AgreeDisagreeThanksLOLTroll
These buttons register your public Agreement, Disagreement, Thanks, LOL, or Troll with the selected comment. They are ONLY available to recent, frequent commenters who have saved their Name+Email using the 'Remember My Information' checkbox, and may also ONLY be used three times during any eight hour period.
Email Comment Ignore Commenter Follow Commenter
Search Text Case Sensitive  Exact Words  Include Comments
List of Bookmarks

Before arriving in Mexico in May of 2016, Polinsky had wrestled in the US, England, Germany and Italy while calling himself Bill Callous, Buddy Stretcher, Sam Elias and Sam Adonis. With the last, he cultivated an obnoxiously narcissistic California surfer dude persona, but it wasnât until the election of Trump that Polinsky hit pay dirt.

Before each match, Sam Adonis prances out waving a large American flag with Trumpâs face in the middle. Enraged, the crowd rise from their seats to scream obscenities, in English even, and to salute the loud-mouthed villain with a middle finger or bras dâhonneur. Bout over, they throw popcorn or coins in Samâs direction as he taunts them.

âHe came as the representative of the United States, a faithful supporter of its politics. Coming to you all, Saaaaam Adonis!â the announcer screamed. [âLlegÃ³ el representante de Estados Unidos, fiel seguidor a sus polÃ­ticas. Llega con ustedes, Â¡Saaaaam Adonis!â]

On this night, Sam had the canton on the fly end of his Stars and Stripes, which made it even more wrong and flippant. Arriving from the States, his family actually sat at ringside. In the ring, one of his opponents ripped the flag from Sam to use as a muleta, so the tall gringo obligingly lunged at it repeatedly as the crowd mirthfully shouted, âOlÃ©!â

During the match, Sam was thrown from the ring several times, and even tossed once beyond the barricade separating fans from performers. With such a palpable hostility, I actually feared for the manâs safety, but it was just fun-and-game and cathartic theater. Right in front of me, a guy in a KISS cap, worn backward, was a kinetic bundle of hatred, and he predictably exploded when Sam and his partners were allowed to win. At the end of the night, however, many of these angry fans would ask for Samâs autograph or take a photo with him.

Sam to Los Andes, an Argentinean newspaper, âThis flag is money to me. Many people get pissed off, but itâs the secret to my success.â Though fresh off the boat, Sam has a Mexican girlfriend and can answer interviewers in Spanish. Heâs in demand all over, Guadalajara, Zaragoza and Zacatecas, etc. Sometimes Sam is paired with another American, Mark Jindrak of Auburn, New York, and they wrestle as Los Hijos de Trump, or Sons of Trump.

By his own admission, Sam Adonis was inspired by the Iron Sheik, an Iran-born wrestler who riled up American crowds with an Iranian flag, often with âIRANâ on it to drive the point home. Incongruously, the Iron Sheik wore a keffiyeh, and his previous alias was The Great Hossein Arab. Iranians, duh, are not Arabs, but some people must become cartoon assholes to make a buck. Other Muslim villains in American wrestling include the Iraq-born Sheik Adnan Al-Kaissie, the white Georgian Sheik Ayatollah Blackwell and the black Canadian Abdullah the Butcher.

By showing up in Mexico at all, Sam Adonis presents Mexicans with a live target that can be cursed, punched, kicked and generally humiliated, and though this piÃ±ata does fight and insult right back, Sam is in a weakened position and entirely at their mercy, simply because heâs in their house. Unlike Trump, Sam canât deport anybody, but they can certainly kick him out. By speaking Spanish, however, Samâs shown himself to be a gracious immigrant and, deep down, a lover of Mexico.

Eschewing naturalism, pre-Hispanic art in Mexico tended to be stylized, symbolic or grotesque, and this impulse has survived in their lucha libre, Day of the Dead and Dance of the Old Men, etc. They understand masks.

The greatest Mexican wrestler of all time is El Santo. The Silver Masked Man also appeared in 52 films, in which he fought headhunters, zombies, Mafiosi, Martians, Wolf Man, Dracula, The White Shadow, The Evil Brain, Dr. Frankenstein, Frankensteinâs daughter, female vampires, she-wolves and karatecas, etc. Dead since 1984, El Santo is being resurrected online, with fake movie posters featuring the Mexican superhero fighting Trump as a Nazi, vampire or zombie, etc. Among the titles are Santo vs. The President of Terror and Santo and Blue Demon [another famous Mexican wrestler] Against the Son of a Bitch and his Fuckinâ Wall. 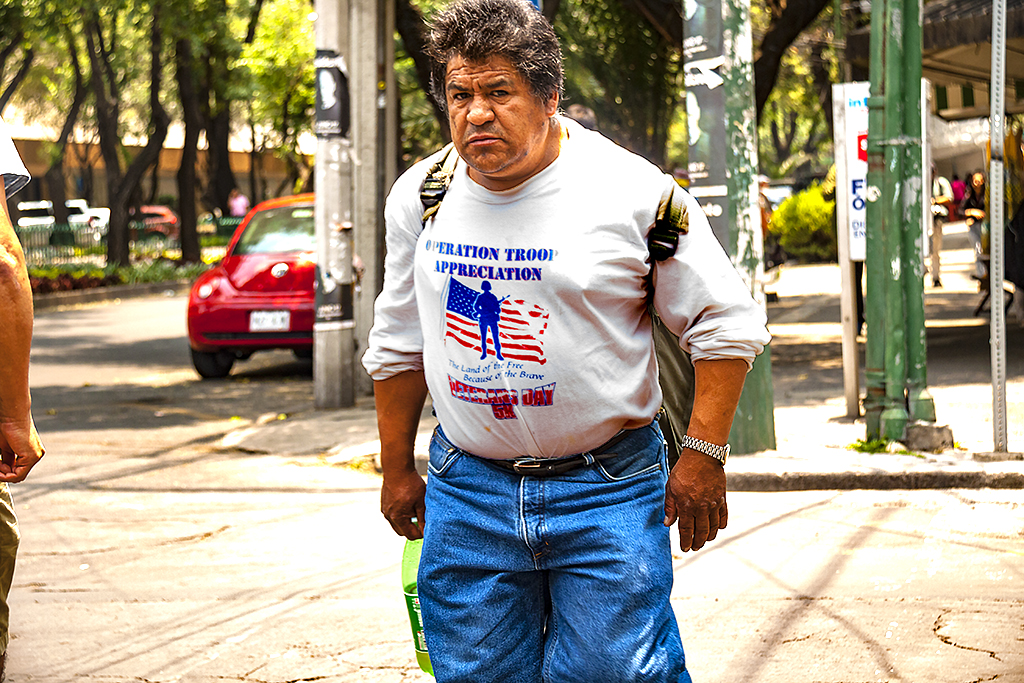 After Trump was elected, there was a movement to boycott American businesses in Mexico, but each Starbucks, McDonaldâs, Burger King, Kentucky Fried Chicken, Carlâs Jr. and Dunkinâ Donuts I passed was packed, and it was hardly unusual to see the American flag on clothing. In TepotzotlÃ¡n, I ran into a chubby dude in a muscle T with silhouettes of a soldier and helicopters over the Stars and Stripes, and âTHANK YOUâ beneath it, and in a Mexico City dive, Nueva Oficina, I spotted a young man at the bar with a small American flag sticking out of the front pocket of his pants. At Mexican cinemas, the top 28 grossing films for 2017 are all American, with The Fate of the Furious, Beauty and the Beast, How to be a Latin Lover, The Boss Baby and Guardians of the Galaxy Vol. 2 leading the pack. The most popular Mexican movie, Mientras el Lobo No EstÃ¡, languishes at 34th place. Hating Trump, Mexicans are still enamored of the USA. 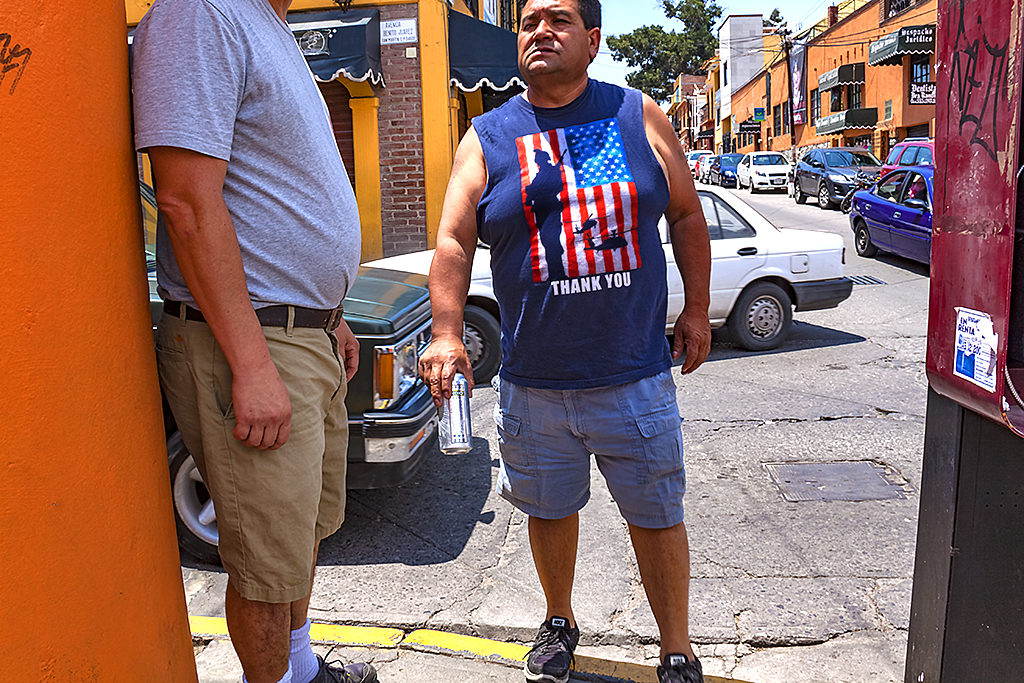 Speaking of Trump, Sam Adonis told the Associated Press, âI embrace the fact that he is a villain. Heâs going to do what he has to do and what he thinks is right. If you donât agree with him, that doesnât really bother him. Heâs going to push forward with what he thinks is right, and the fact that heâs embraced his public perception, whether itâs good or bad, I have respect for that.â

Like millions of other Americans, Sam believed Trump to be genuine and uncompromising. To the San Jose Mercury News, however, Sam hinted at a deeper insight, âHeâs kind of embraced his position, as you like me or you donât, but Iâm not changing. It is almost a professional wrestling mentality and I have a sympathy for that.â So there you have it. Trump has a professional wrestling mindset.

Jesse Ventura, a wrestler turned politician, has repeatedly pointed out the similarity between American politics and professional wrestling. In 2010, Ventura said, âPolitics today is pro wrestling. It is pro wrestling, and you know what I mean by that? I mean by that that the Dems and Repubs in front of you [reporters] and in front of the public is going to tell you how they hate each other, and how theyâre different, but as soon as the camera is off, in the backroom, theyâre all going out together, and theyâre all buddies cutting deals. Itâs just like pro wrestling. In front of the public, we hate each other, weâre going to rip our heads off, but in the locker room, weâre all friends. Iâm suggesting politics is fake.â

In 2016, Ventura told The Atlantic, âMany of these elected officials are just like wrestlers in the public and then theyâre the opposite in private. Case in point, do you remember a few years ago who was some congressman from Florida who voted against every gay bill and it turned out he was gay, do you remember that? Yeah, so thereâs a classic example of it. This guy who was gay hid the fact that he was gay, voted like he hated gays, and so he created a personality that was completely averse to what he really was. And wrestlingâs the same way.â

Though American politicians are phonies, and American elections are farcically rigged, Americans continue to rabidly support their favorite political puppet, whether Obama, Hillary, Sanders, Trump or whoever. Going berserk over each cartoon savior or villain, most Americans donât even know theyâre being force-fed lucha libre.