My Grandma's Old House in Saigon, 2019
◄►Bookmark◄❌►▲ ▼Toggle AllToC▲▼Add to LibraryRemove from Library • BShow CommentNext New CommentNext New ReplyRead More
ReplyAgree/Disagree/Etc. More... This Commenter This Thread Hide Thread Display All Comments
AgreeDisagreeThanksLOLTroll
These buttons register your public Agreement, Disagreement, Thanks, LOL, or Troll with the selected comment. They are ONLY available to recent, frequent commenters who have saved their Name+Email using the 'Remember My Information' checkbox, and may also ONLY be used three times during any eight hour period.
Email Comment Ignore Commenter Follow Commenter
Search Text Case Sensitive  Exact Words  Include Comments
List of Bookmarks

In December of 2011, I was on an Amtrak rolling through North Carolina. Sitting in the lounge car, I gazed mostly at trees and fields, with their isolated houses or trailers. Every so often, a town would flit by, Smithfield, Kenly, Elm City… Though all these names meant nothing to me, each settlement appeared sweet and inviting, and I constantly wished I could just get off the train. Once in Mississippi, I did just that, so had to take an additional bus to my final destination.

In Kenly, thereâs a Storminâ Normanâs Barbecue, which I thought was General Schwarzkopfâs. That would have been a good catch if it was, a place worth visiting. Most often, though, a traveler will ride or walk right by a spot without realizing its significance.

At Rocky Mount, the train stopped, and there wasnât much to look at but a bunch of dead storefronts, with only Bottoms Insurance in business. Still, I was very excited. Turning around, I shouted to two strangers, both around 25-years-old, sitting at a nearby table, âHey, this is where Thelonious Monk was born!â

Of course, they were startled and a bit annoyed, for I had interrupted their flirting. The white woman had just graduated from the University of North Carolina, majoring in administration. On the Formica table in front of her was a lurid paperback, the type you buy at 7-11. The black man had been talking about how nice he smelled each time he wore his girlfriendâs coat.

Since Monk stopped playing even before I got airlifted out of Saigon, I never saw him, but in 1983, I did catch a concert in Washington DC by Charlie Rouse, Monkâs long-time sax player. A local drummer, Dude Brown, was also wonderful that evening. As an aspiring artist/writer, I was impressed not just by Monkâs singularity, but his late silence. Without an explanation, Monk simply stopped, and itâs too simplistic to say he was burnt out.

Though Monk was only five when he moved to NYC from Rocky Mount, it certainly shaped him, and itâs speculated that his Rootie Tootie, with its train sounds, is an echo from his infancy. As Sam Stephenson points out, âThere arenât any train whistles in New York City.â

These thoughts occurred to me this week after I happened to walk by a Saigon building I recognized as the old Cambodian Embassy. Its two guardian lions tipped me off. After half a century, I was suddenly in my maternal grandmaâs neighborhood. Turning right, I soon ran into the Banana Orchard Market, whose name I still remembered. Locating my grandmaâs house, though, wasnât so easy, for itâs tucked in an alley, but which one?

As an adult in the US, I would sometimes think of these alleys, with some so mazelike and narrow, I started to doubt my memory. In a dream or half dream, I would find myself in a dark, twisting, tunnel-like alley near my grandmaâs house, but waking up, I would think, surely such a place cannot exist. This week, I was in that alley.

After a few false turns, I finally found myself staring at my grandmaâs house. Though its door and windows were old enough, they werenât from 1975, when my grandma last lived here. The opposite house was less than six feet away, even closer than I remembered. As a child, I spent quite a bit of time in this tiny house, and even attended first grade in the neighborhood. My mother liked to outsource mothering.

It has but two rooms, with a round window in the wall separating them. Like a bird or a child on the moon, I often perched in that window. The kitchen was in the back and partly open. At night, sometimes I could hear a cat walking on a neighboring tin roof.

My maternal grandpa was killed by the Communists in the early 50âs, so my grandma had to raise five children by herself, yet she managed to put each through college. By the time I lived in that house, only my youngest aunt, Háº±ng, was there with my grandma. Aunt Háº±ng was in law school. In the US, she worked as a law librarian for nearly forty years, for just one firm on I Street in Washington DC.

In 1972, I was sitting on a bed with aunt Háº±ng and my grandma, watching TV, when a man arrived to announce that my uncle Báº£o, on my fatherâs side, had just been killed. Uncle Báº£o was a medic in the South Vietnamese Marines. Not yet married, he was considered the best looking of four sons. Since neither woman really knew uncle Báº£o, they only sniffled a bit, and not sobbed, I noticed.

After my parents got divorced in 1973, I never entered that house again, so the very next time I saw my grandma was in a Guam refugee camp in May of 1975. With about 100,000 people living in endless rows of hastily erected Army tents, it was a miracle I should run into anyone I knew, but there was my grandma, and though she was happy to see me, she wasnât effusive. It was as if we had chanced onto each other at the Saigon Zoo.

Saigon had fallen, and my father was presumably still there, with his fate uncertain. Escaping, my grandma had left behind many relatives and friends. Like all the other Vietnamese in Guam, she had no idea where she would go next, and what she had to do, yet her composure was rather typical, for Vietnamese can impose normalcy on just about any situation. Since the refugee camp had access to a beach, many people went swimming.

From a barge just offshore, but well within view, at least a dozen American GIs were skinny dipping, not unlike the boys in Thomas Eakinsâ Swimming Hole. On the beach, there were dozens of Vietnamese, including old people and little kids. Our alienness likely prodded these young men into their exhibition, licensed their inhibition. Whooping and hollering, they were having a fine time. Though hardly believing what they were seeing, the Vietnamese were mostly passive.

Some Americans were inside the refugee camp as food vendors, so there was a man selling hot dogs. My grandma bought me one, but as she was about to pay, she asked, âHow many?â instead of âHow much?â An 11-year-old smart ass, I thought to myself, Grandma is wrong! I never saw my grandma again after that afternoon. Living only three years in the US, sheâs buried in Northern Virginia.

Walking around the Banana Orchard neighborhood, I recognized just one business, a corner restaurant, although its name had likely been changed. My old school, too, had a new name, LÆ°Æ¡ng Äá»nh Cá»§a. Educated in Hong Kong, Shanghai, Fukuoka and Kyoto, LÆ°Æ¡ng Äá»nh Cá»§a was a pioneering Vietnamese agronomist, and his wife, Nobuko Nakamura, also made a name for herself, first as a Japanese language broadcaster for Voice of Vietnam, then for her memoir, Wind from Hanoi, which was published in Japan in 2000.

Interviewed in 2013 by a Vietnamese magazine, Tuá»i Tráº», Nakamura shared, âEveryone say that Japan is a developed and wealthy country, but Vietnam is poor, and during my time, there was also war, so I must have suffered. But it wasnât like that. No matter how much I suffered, my life wasnât as hard as it was for a Vietnamese peasant, out in the field from early morning, with his feet in the bone chilling mud, and not much to eat. Also, the Vietnamese have always helped me. And next to me, I had my husband, Cá»§a, and my children.â

In Vietnam since 1952, Nakamura lives in a Banana Orchard alley.

The most remarkable person to be associated with this neighborhood is probably Thich Quang Duc, the monk who immolated himself to protest President Ngo Dinh Diemâs treatment of Buddhists. There is a memorial in Banana Orchard where this happened. After this historic suicide, the monkâs body was taken to XÃ¡ Lá»£i Pagoda, to be cremated, but his heart would not burn, even at well over 7,200 degrees Fahrenheit. Sealed in a silver pyramid, itâs now kept in a Saigon bank vault.

Thelonious Monkâs middle name is Sphere, which is wonderfully apt, for thereâs an entire world already inside each person, much less a neighborhood. Each will remain colorless and flat, however, unless fleshed out by stories. 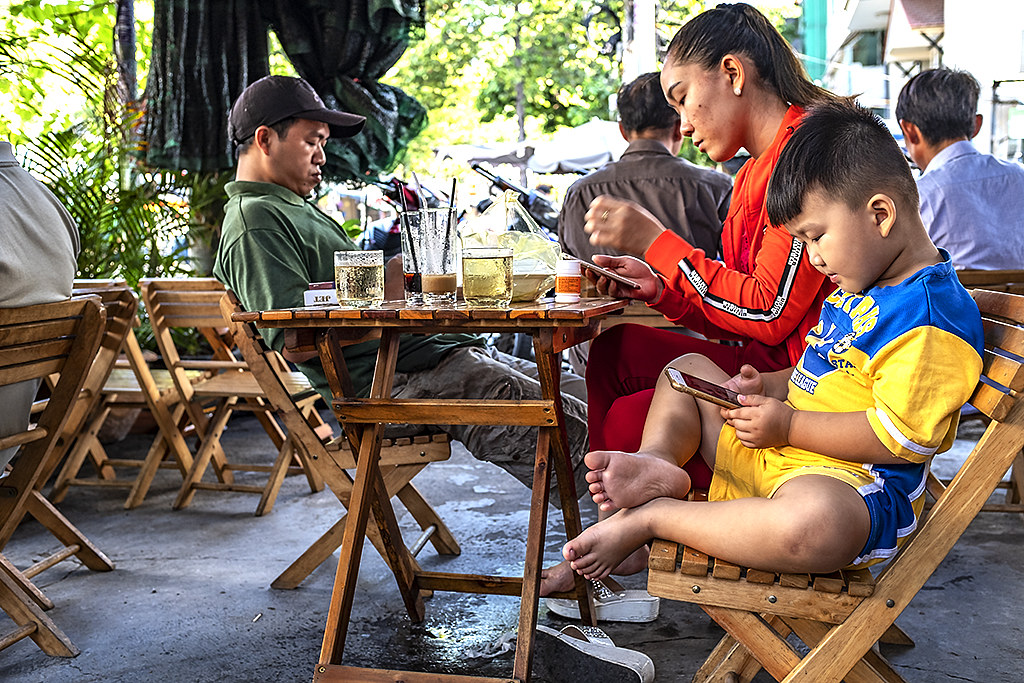 I finish this article in a cafÃ©, GÃ³c Nhá» [Little Corner], where at least half of the clients are fixated to their smart phone, so Vietnamese, too, are becoming rootless provincials. In more advanced societies, though, this deracination is much more pervasive and maybe even terminal. Ignoring their neighborsâ stories, billions have become addicted to an infinity of false news, images, sounds and sensations.

Commenting on my article, âMashed Potato and Another War for Israel,â Joe Levantine pleads, âWesterners should leave their screens and start reaching out to their neighbours and their relatives to stand a chance against the cultural onslaught they are being subjected to.â

When this onslaught constitutes everything you know, withdrawal may be impossible.

← Mashed Potato and Another War for IsraelSurviving Vietnam, Listing America and ... → ← Mashed Potato and Another War for IsraelSurviving Vietnam, Listing America and ... →
Current Commenter
says:
Current Date at Time Now
Leave a Reply - Comments on articles more than two weeks old will be judged much more strictly on quality and tone
Cancel Reply