Today's Daily News, 2010
◄►Bookmark◄❌►▲ ▼Toggle AllToC▲▼Add to LibraryRemove from Library • BShow CommentNext New CommentNext New ReplyRead More
ReplyAgree/Disagree/Etc. More... This Commenter This Thread Hide Thread Display All Comments
AgreeDisagreeThanksLOLTroll
These buttons register your public Agreement, Disagreement, Thanks, LOL, or Troll with the selected comment. They are ONLY available to recent, frequent commenters who have saved their Name+Email using the 'Remember My Information' checkbox, and may also ONLY be used three times during any eight hour period.
Email Comment Ignore Commenter Follow Commenter
Search Text Case Sensitive  Exact Words  Include Comments
List of Bookmarks

I was just interviewed by two Temple journalism students, Amelia Burns and Erin Moran, and though they appeared very bright and enterprising, with Erin already landing a job that pays all her bills, I feel for these young ladies, for this is a horrible time to make and sell words, of any kind, and the situation will only get worse. Weâre well into postliteracy.

With widespread screen addiction, hardly anyone buys books or newspapers anymore. My local newspaper, the Philadelphia Inquirer (Inky), no longer has a book review section. Its retired editor, Frank Wilson, was never replaced. Frank had three of my books reviewed, Night, Again, Fake House and Blood and Soap, but the last was in 2004.

Frank lives near me, so I see him around. A lifelong Philadelphian, he takes pride in knowing the city well. Speaking of Steve Lopez, an Inky reporter who made his name with a novel about North Philly, Badlands, Frank sneered that Lopez didnât actually try heroin, so he didnât really know what he was talking about. Frank did.

If you mess with Frank, the bearded, snarling Irishman will maul you with his cane. Frankâs not just ancient, but old school.

After moving to Philly in 1982, Iâd read Clark DeLeonâs daily column in the Inky. Covering the city with knowledge, heart and humor, DeLeon helped me to feel grounded, and challenged me to explore my new home. After 23 years at the âsame sloppy-topped gun-metal gray desk,â DeLeon was fired, however, a casualty of postliteracy.

Clark, âFor 16 years I wrote six columns a week for the paperâs metro section. In later years I was cut back to five columns a week. In the final year, I was down to 1 column a week in the feature section.â 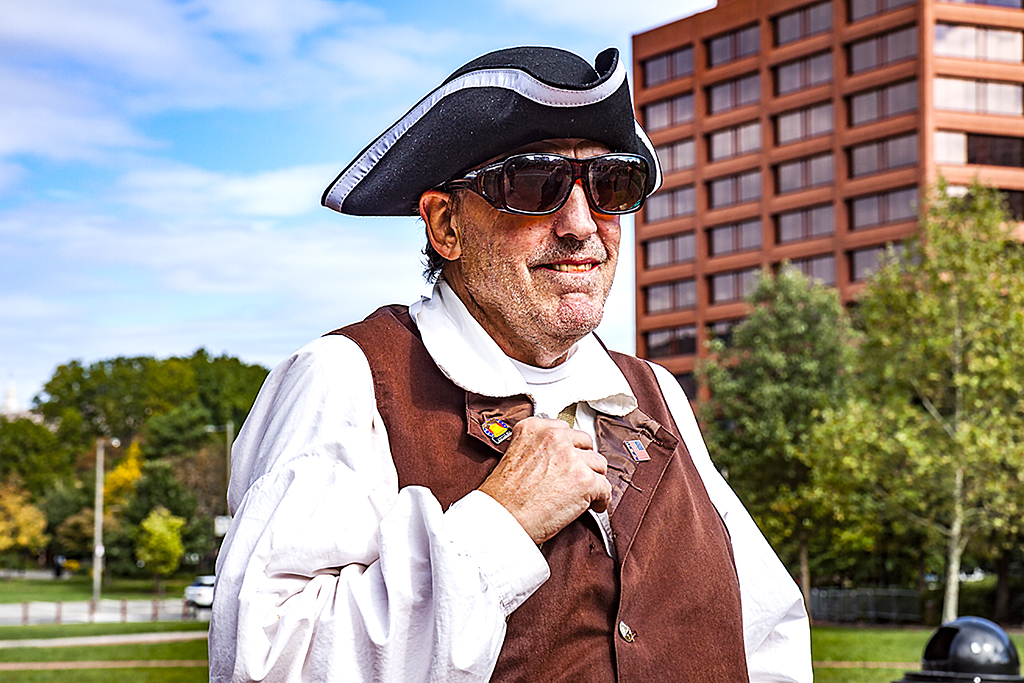 No longer a professional journalist, Clark earns his keep by working as a costumed tour guide outside Independence Hall. Done with work, heâd often down a few at Dirty Frankâs. A tall, square-jawed and rugby playing dude, Clark would sit there in his black tricorne hat, brown waistcoat and white shirt with billowing sleeves, like a hulking Paul Revere, here to announce the worst of possible news. The death of the word, and thus thinking, is coming!

One recent evening, there was karaoke at Frankâs, so Clark got up to sing Springsteenâs My Hometown. With his strong, sonorous voice, Clark handled its lyrics expertly, but then he unexpectedly choked up, and had to stop. Itâs understandable, because the songâs depiction of economic collapse describes the country and city he loves, as well as his own plight:

Theyâre closing down the textile mill across the railroad tracks

Our physical degradation is nothing compared to our mental derangement. Take our song lyrics, which are no longer required to make sense, as long as the beat is righteous. Postliterate, we fumble and befoul English. As we are forced to shout at each other above the constant din, there is no subtlety left to language.

Before the internet, I would buy the Inky first thing in the morning, often before dawn, as the newspaper box across my apartment had just been stocked, then I would get the Daily News. Many days, I would also pick up the New York Times and New York Post, and during the week, I would read the Philadelphia City Paper and Philadelphia Weekly. Just about everybody I knew also bought at least the Inky or Daily News each day, so what we had, then, was a shared body of topics to discuss. We belonged to the same mental community.

Of course, you can rightly claim that we were all uniformly brainwashed, especially since the Inky and Daily News were owned by the same damn company, but the free weeklies did provide alternative viewpoints, and many neighborhoods also had their own rag. The Philadelphia Tribune catered to blacks.

As a young writer and artist in the 90âs, I was written up in all the local outlets, Inky, Daily News, City Paper and Philadelphia Weekly, and this coverage grounded me, tied me to my city. When I had my mug in the Daily News in 1991, for example, the cashier at a cheesesteak joint congratulated me, and the owner of some corner store urged me to go home and be creative!

Although my writing about Philly has become much more in depth, my local audience is mostly gone, thanks to the internet, which has fragmented each place on earth, for no matter where you live, youâre hardly there any more. Thanks to the internet, everything around you has become much less concrete, as in your city, desk, lamp, spouse, with the computer screen now turned into your most needy and indispensable companion, for it has become your mirror, soul and shrine.

Traveling to a new town, I always looked forward to browsing its newspaper, for here was its self-portrait, exotic and absolutely inaccessible to me previously. I remember being delighted by the social tidbits in a rural Maine newspaper, as in Mr. and Mrs. Smith had a three-day visit from their grandson, Jack, an accountant in Boston, or the Tremblays have finally left for their long-planned trip to Las Vegas. They will be back on Monday, with many interesting tales to regale us all. In the style section, there might be a meatloaf recipe from, say, Mrs. LeBlanc. With its colloquialism or even clumsiness, the English, too, is reflective of a place.

Whatever its flaws, the local newspaper gave each community a social forum and common culture, and though newspapers havenât died off completely, the remaining ones are eviscerated, and hardly read, for nearly everyone is on social media, all day long, where they can broadcast themselves. From reading about their town, people now upload endless selfies and self-important proclamations. Everyone is his own news, superstar and universe. Self-publishing, each man is an insanely prolific author, of gibberish, mostly, delivered to almost nobody, but itâs all good, for he can endlessly worship his preening self, on a screen, an intoxicating experience. With FaceBook, Twitter and Instagram, everybody is famous all the time, to himself.

There is a silver lining to all this, for the internet has allowed deeply heretical views to surface, so that we can be swayed by writers who would otherwise be entirely silenced, and Iâm thankful that I can crank out thousands of words monthly to thousands of people, if only for PayPal donations, and itâs a miracle I havenât ended up homeless myself, like some of the people I portray. The net effect of the internet is negative for both literacy and community.

Drowning in bilge, we excrete our own and happily guzzle it all. There are no coherent stories left, and no reflection, and if something makes sense, it can only do so for a flash, before itâs washed away by a deluge of lies and trivia. Nearly as soon as something is read, or rather, skimmed, itâs permanently forgotten.

Serious art forms such as painting, sculpture and poetry have become occult pursuits, for they require contemplation, solitude and silence, which are all but banished from this manic society. Nothing matters, man, least of all the word. Across the river, Whitmanâs grave sits desolate.

In each Edward Hopper painting, everyone is profoundly and pathetically alone, even when he or she is with others, but thatâs the American essence, as captured by Americaâs greatest painter, but so did Johns, Warhol, Guston, Salle and Basquiat. Trapped in this self-congratulatory, narcissistic, house of mirrors nation, how can we be anything but solipsists? Blind to everything, we just want to hear our own voice.

In this accelerating speed culture, there is no time to think, or even feel much beyond an insatiable anxiety. Driven half insane by a surfeit of nothingness, many Americans can only calm down with plenty of alcohol and/or opioids.

Admiring our screen persona, we blunder into the mindless void. ← Obscured American: Benny the Landlord, ...Postcard from the End of America: Lanca... →
Current Commenter
says:
Current Date at Time Now
Leave a Reply - Comments on articles more than two weeks old will be judged much more strictly on quality and tone
Cancel Reply