Love City, 2018
◄►Bookmark◄❌►▲ ▼Toggle AllToC▲▼Add to LibraryRemove from Library • BShow CommentNext New CommentNext New ReplyRead More
ReplyAgree/Disagree/Etc. More... This Commenter This Thread Hide Thread Display All Comments
AgreeDisagreeThanksLOLTroll
These buttons register your public Agreement, Disagreement, Thanks, LOL, or Troll with the selected comment. They are ONLY available to recent, frequent commenters who have saved their Name+Email using the 'Remember My Information' checkbox, and may also ONLY be used three times during any eight hour period.
Email Comment Ignore Commenter Follow Commenter
Search Text Case Sensitive  Exact Words  Include Comments
List of Bookmarks

Iâm sitting in a spacious bar, Love City, that was once a factory. Too slicked up, itâs not quite a ruin bar, of the kind you find in Budapest. The patrons are mostly hipsters and yuppies, but with a handful of Joe Sixpacks thrown in. Looking like contractors, theyâre probably fixing properties in this rapidly gentrifying neighborhood.

On the way here, I spotted a few homeless lurking in the underpasses, beneath the Reading Railroad train trestle. Long disused, itâs being turned into a beautiful park, so soon enough, youâll find the haves walking their dogs, jogging or sunning themselves above, with the have nots sleeping on dirty mattresses, or going to the toilet, below. Theyâll probably all be shooed away. Problem solved.

After talking to three black men, a once-pretty white woman scrambled up an embankment. Reeking of urine, a groggy black dude asked me for change, as did a black lady waiting at a bus stop. A handful of tourists tittered outside the Edgar Allan Poe house. 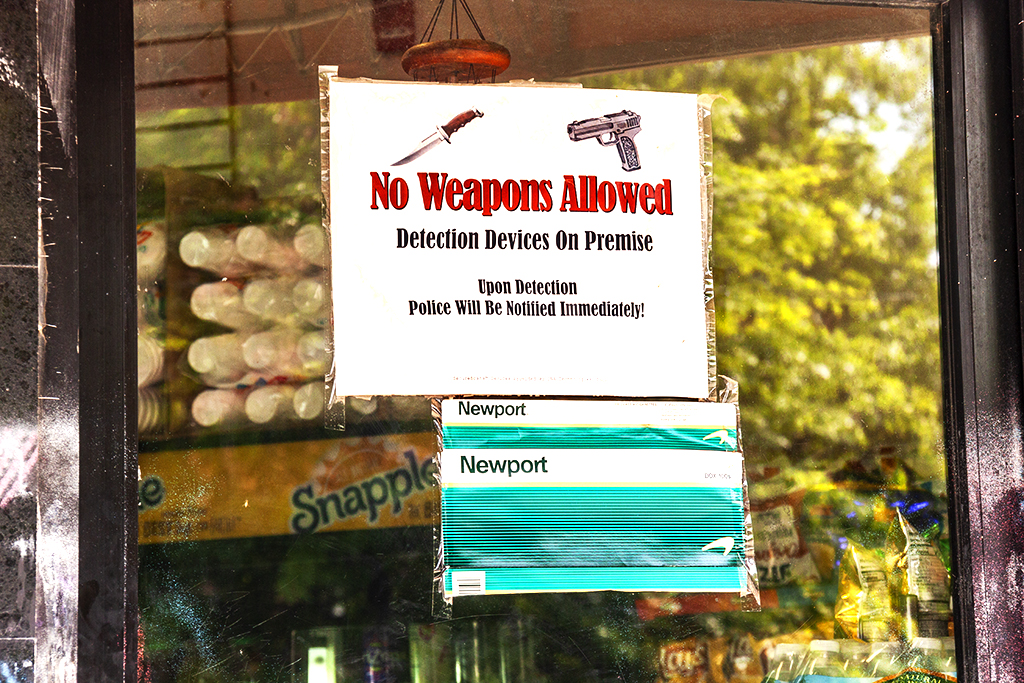 Since a 20 oz. Love City Lager is a reasonable $5, I have one in front of me as I upload three photos, just taken in the neighborhood.

One is of a sign on a corner grocerâs door, âNo Weapons Allowed / Detection Devices On Premise / Upon Detection/ Police Will Be Notified Immediately!â Beneath it is an ad for Newport, aimed at a black clientele, obviously, though youâre not supposed to notice that, since weâre all the same, remember? This is the kind of store that sells cigarettes, soft drinks, candies, potato chips, beef jerky, canned food and the only symbol of hope left for many Americans, lottery tickets. 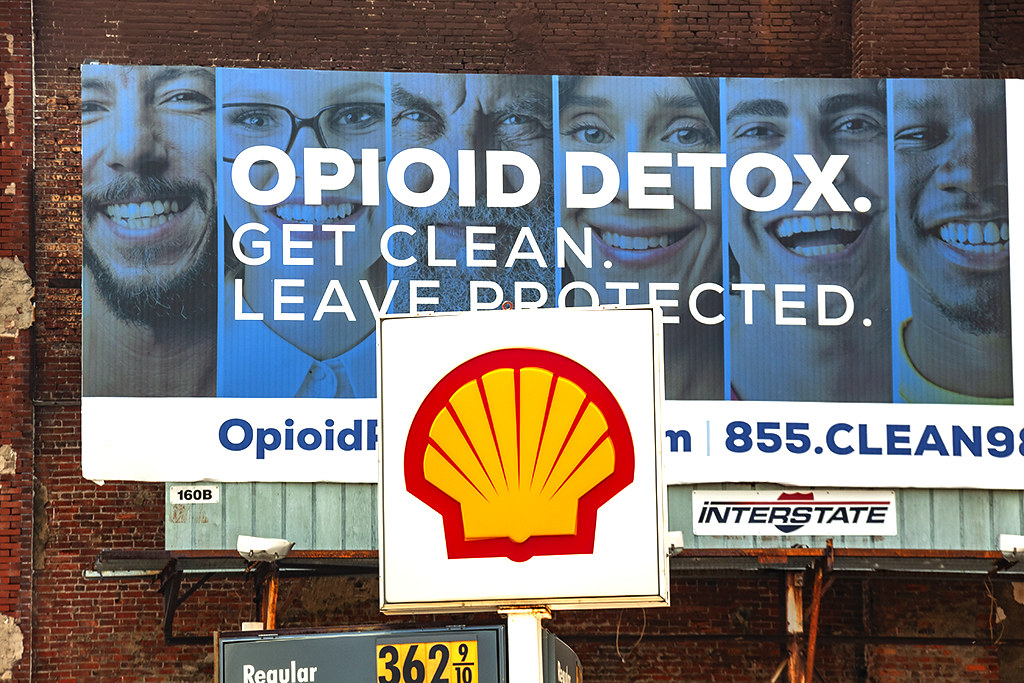 The second photo is of a billboard, âOPIOID DETOX / GET CLEAN. / LEAVE PROTECTED,â with five white faces, and one black, all happy. Just three miles away, there are around 40 tents on sidewalks, occupied by homeless junkies, mostly white and under 35. I didnât think Kensington could get worse, but it has.

The last is of graffiti on a long-abandoned factory, âFUCK A NAZI!â

Though it didnât say, âFUCK A NAZI UP!â it still sounds hostile, but thatâs English for you, for in this language, making love is constantly used to convey hate or calamity, as in, âI will fuck you up,â âHeâs fucking with usâ or âWeâre fucked.â

With Trump installed, liberal, progressive Americans see Nazis everywhere, by which they mean all those who oppose having an open border, or who might identify as, God forbid, a nationalist, but a nation, by definition, canât exist without borders or nationalists. 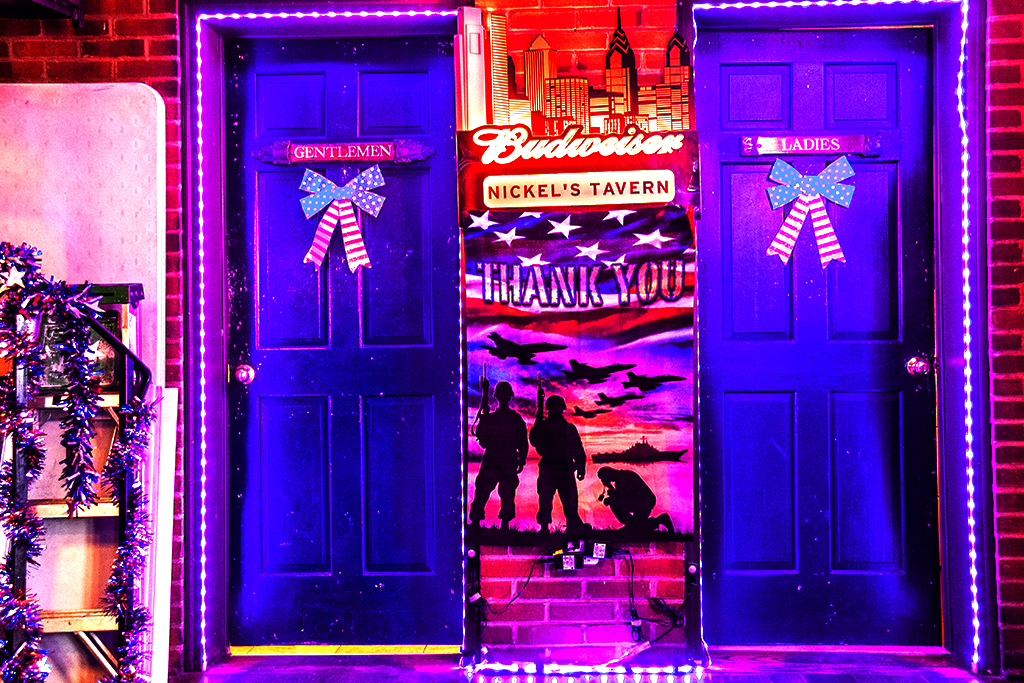 Believing in America shouldnât equate to cheerleading her wars, however, and thatâs where too many Joe Sixpacks have erred. In their bars, youâll find all kinds of signs thanking soldiers and veterans, and the American flag everywhere.

A Joe Sixpack tavern accrues history organically, honors it and is grounded, like its patrons. A hipster/yuppie bar, on the other hand, is always divorced from its surroundings, and serves an anchorless crowd. Designed to make you feel au courant, it also leaves you restless, for you know that way cooler bars will appear soon, nearby. According to hipsters, the future, too, is always right around the corner, and history is just a hazy series of crimes and mistakes, to be condemned and flee from.

So hep, they identify themselves with a term from more than a century ago.

Me, I would rather get stupid in Friendly, Nickelsâ or Fatsos, places where they joke about erections and blow jobs, but Iâm at Love City because Iâll have to give a paid talk a few blocks away, in an hour.

At Friendly, a short, philosophical Honduran said to me, âMy wife, she gives me pussy, right? But my mother,â he stared at me hard, âshe gave me life!â Smiling triumphantly, Manuel gave me a fist bump, shook my hand.

After 30 years in the US, this former illegal immigrantâs English is still somewhat shaky, but you must give him much credit for doing his best to blend in. Manuel believes in a common culture.

At Fatsos, 65-year-old Rick yelled at another old head across the bar, âWould you like a blow job, Steve?â

Turning to the slim, blonde, 35-year-old bartender with thick, stuck-on eyelashes, Rick petitioned, âErin, will you take care of Steve for me? My mouth is full,â then he went back to scratching lottery tickets, on which he spends between 40 to 50 bucks a day. Each time Rick lost, heâd curse and toss the ticket onto the floor, behind the bar, for Erin to dispose of.

Nodding at me, Rick grinningly asked Erin, âHave you ever blown a Chinese guy?â

Flattering her, he then said, âWill you wipe your ass with this dollar and give it back to me?â

That kind of bantering, you wonât find at Love City, thatâs for sure.

The title of my slide talk is âThe Future is Asia.â Its main point, I have discussed in various essays, and itâs basically this: Nations that stress linguistic, cultural and/or ethnic unity will outlast those that donât. Further, nations that shun their own heritage are as good as dead. For years, I have also stressed that the United States is ruled by a rootless, criminal cabal, and for pointing out something so obvious, I have had countless slurs hurled at me.

Whatever, man, Iâm tired. As this ship sinks, wave that flag and snipe away!

Mellowed, I walk to my talk venue. A progressive institution, it no longer has menâs and womenâs rooms, but two âAll Genderâ bathrooms, with only individual stalls, so that a 13-year-old girl, say, may find herself right next to me. As we do our business, weâd only be separated by a partition a good foot off the floor.

In Vietnam, they would find such an arrangement insane and felonious, but then itâs not as advanced as the US of A. The transgender spiel is a part of the campaign against masculinity. Castration is in.

As a toxic model, this criminal, decadent and deeply-confused nation canât collapse soon enough. Americans, too, need a fresh start, though they may have to cease calling themselves American. It wonât matter much. It already doesnât. On Gypsies
The EU interviewed 8,000 Gypsies, the results will shock you!
Guillaume Durocher
• 275 Comments • Reply
← Dreamers, Opioids and Involuntary Celib...Obscured American: Benny the Landlord, ... →
Hide 112 CommentsLeave a Comment
"Postcard from the End of America: Callowhill, Philadelphia"
• 112 Comments
Commenters to Ignore
Commenters to ignore (one per line)