Democratic National Convention, 2012
◄►Bookmark◄❌►▲ ▼Toggle AllToC▲▼Add to LibraryRemove from Library • BShow CommentNext New CommentNext New ReplyRead More
ReplyAgree/Disagree/Etc. More... This Commenter This Thread Hide Thread Display All Comments
AgreeDisagreeThanksLOLTroll
These buttons register your public Agreement, Disagreement, Thanks, LOL, or Troll with the selected comment. They are ONLY available to recent, frequent commenters who have saved their Name+Email using the 'Remember My Information' checkbox, and may also ONLY be used three times during any eight hour period.
Ignore Commenter Follow Commenter
Search Text Case Sensitive  Exact Words  Include Comments
List of Bookmarks

To represent anything is to reduce and deform it, obviously, for even Leonardoâs Mona Lisa is but a stick figure compared to the witty, voluptuous and redolent broad, whose repartees, smiles, jokes and burps, from moment to moment, can only increase her charm and terror, and thatâs why man never allowed himself to be engulfed by any medium, be it oil painting, music or literature. After the most satisfying page, he still looked up and walked outside. Traveling vast distances, Chekov discovered heaven in Ceylon and hell in Sakhalin, and Flaubert was only being reductive when he goofed, âThe one way of tolerating existence is to lose oneself in literature as in a perpetual orgy.â He, too, had plenty of lust for the actual.

Pornography multiplies frequency, duration, angles, positions and sexual partners, an endless and eternal sexual buffet, except that none of it is really happening. Similarly, American democracy gives the appearance of boundless participation by all citizens, for they canât just vote in caucuses and elections, but cheer at conventions, march in protest, write letters to newspapers, comment on the internet and follow, blow by blow, the serial mud wrestling between opposing politicians. Pissed, they can freely curse Bush, Obama or Trump without fearing a midnight knock on the door. Alas, none of their âpolitical activitiesâ actually matters, for Americans donât influence their governmentâs policies, much less decide them. Itâs all an elaborate spectacle to make each chump think heâs somehow a player, in on the action, when heâs actually all alone, in the dark, to beat his own meat, yet again.

He has railroaded, premasticated opinions on everything, but without the means to act on any of it. Only his impotence is real.

Itâs all good. Groomed by the culture, his preteen daughter fancies herself a pornographic starlet. His reeducated son is convinced his assigned manhood is beyond toxic, and must be chopped off at the first opportunity. His transitioning wife canât wait to fuck him up the ass.

Castrated, he may still ârebelâ in sanctioned ways, and none does this more aggressively than the theatrically strident âradical,â whoâs most conformist, paradoxically, although thereâs a long history of this.

With his red flag, black uniform and covered face, this specimen is a cookie cutter puppet thatâs jerked by a totalitarian master, the very state he thinks heâs resisting. Obediently correct, the American radical divides and attacks the masses. Happily domineered, he demands that everyone else becomes as shackled as he is, and since this will never happen, heâs eternally enraged.

His zealotry is not just abject, but dangerous, for he makes an ideal foot soldier for state or deep state-sponsored street violence, against those who should be his allies. Notice how the solidarity of the 99% is no longer evoked by anybody.

The Occupy movement targeted Wall Street, and not the White House, Capitol Hill or Pentagon, so they fingered who really run this country, but they made several crucial mistakes, and the worst was to advertise their intention way ahead of time through social media. Thatâs why hundreds of cops were there to block off Wall Street, forcing protestors to move to Zuccotti Park, and this became the model for the rest of the countries. Occupy Wall Street became a series of temporary tent cities.

I visited Zuccotti Park repeatedly and eight other Occupy camps. In Raleigh, I found them squatting on an empty lot off downtown, with the protesting that day a karaoke session at a nearby bar. âWeâll sing John Lennonâs “Imagine,” you know, songs like that,â a middle-aged soccer mom explained. In New York, there was a chirpy ditz with a sign, âREVOLUTION IS FUN.â Worse, there was even âLIBERATE IRAN,â but there was advocacy for every cause under the sun, animal rights, free Falun Gong, on and on. A pudgy, dazed looking dude tried to enlist people into his âFART SMELLER MOVEMENT.â A young woman stripped down to her panties.

Government agents defused the threat by diffusing its message, but the state got plenty of help from clueless, narcissistic clowns who just had to raise their special voice, until hardly anyone knew what the mess was about, and it was a stinking mess. Occupy Philly became an open air toilet around City Hall. âDEMAND NOTHING! OCCUPY EVERYTHING!â

Deploying all sorts of violence, they prop up Gandhi and Martin Luther King, after theyâve shot him in the head, and even Obama preached nonviolent resistance between orders of drone strikes. Americaâs suavest prez ever even joked about it, âThe Jonas Brothers are here; theyâre out there somewhere. Sasha and Malia are huge fans. But boys, donât get any ideas. I have two words for you, âpredator drones.â You will never see it coming.â

They sure will, though. Americaâs 17 intelligence agencies will make sure no serious domestic rebellion can develop, and no coup dâÃ©tat hatched, but even if thereâs a rogue pilot, say, one whoâs not afraid to die to make a statement, what should he bomb? Certainly not the Pentagon, for only the Pentagon or its master can send a missile through its wall.

Even columns of tanks converging on the White House wonât change anything.

Any revolution or coup will have to contend with 1.3 million active soldiers, not to mention how many robots and drones? Realizing its mercenaries arenât all that, the state is increasingly relying on fearless, sleepless machines, and itâs demoralizing to realize the best you can do is break their expensive toys, while they can mangle or kill you while inflicting much pain, or force you to witness your screaming comradeâs last moment. Also, shot drones donât leave behind the devastatingly bereaved. It takes an army to fight one, and most Americans canât even organize a bowling team, remember. With guerrilla actions, they can certainly carve out liberated zones, however, so thereâs your glimmer of hope.

Occupy was no revolution, but its initial aim of disrupting a key operation of the state was the right idea, for you must hurt your enemy, if only for a day. Imagine Wall Street or nearby Goldman Sachs in flames! This goal was akin to puncturing a pipeline, blowing up an important bridge or assassinating a crucial figure. In America, however, thereâs no visible target whoâs actually worth killing, for none is indispensable to the stateâs criminal function. Those out in the open are just actors. In laying out a much ballyhooed puppetâs mangled cadaver, all youâll achieve is a symbolic goal, but perhaps itâs worth it after all, for all traitors must pay, and it may even inspire a real revolt.

Revolution sounds cool because it implies a terrible awakening of the masses, to impose their will, exact justice and start a new paradigm, but most revolutions are fake, with many orchestrated by another elite or triggered by a foreign power. Moreover, Americans are too divided and atomized to rebel as a people, so the best you can hope for is to regain independence, freedom and sanity for your state, region or maybe just town.

The first step is to stop thinking of yourself as an American, for thereâs no America left to save, much less âmake great again,â and there are no Americans left either, for if anybody can be a defacto American just by showing up, then the concept is meaningless. Thatâs like me landing in Tel Aviv tomorrow and declaring Iâm a Jew.

Your average American hardly has a hometown, just a homepage, and his neighbors are the anonymous, pseudonymous, hasbarists and trolls he compulsively chats with. If you donât even belong to your neighborhood, how are you the citizen of any nation?

I was born in 1963, a year of many coup dâÃ©tats, and you may remember the one in South Vietnam, Guatemala, Ecuador, Honduras, Dominican Republic, Benin, Togo, Iraq or Syria, which actually witnessed two. The most significant happened right in the US of A, however, and like most, it was certainly an inside job.

Like Ngo Dinh Diem, John F. Kennedy wasnât a good enough puppet, so he had to be expertly brained. Even if Lyndon Johnson wasnât in on the plot, he served them faithfully afterwards, as has every American president since. Theyâve all gotten the message. Similarly, it only takes one academic to be defenestrated from the ivory tower for the rest to toe the line. Americans live in a cowed country. Home of the brave my ass! 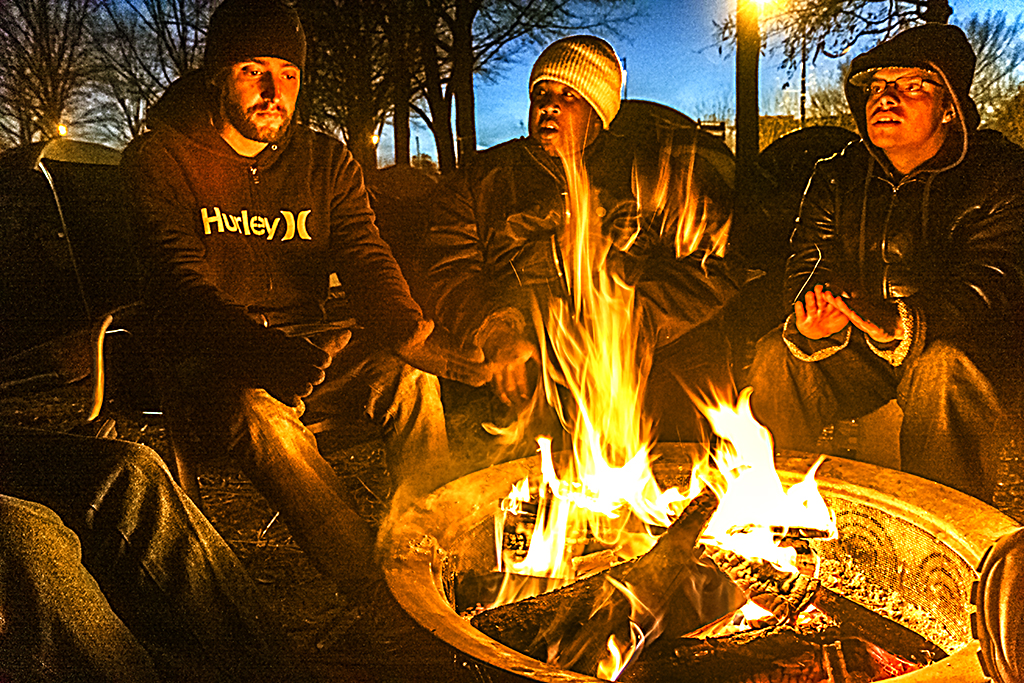 Protesting their government, thousands of Americans became symbolically homeless, but their society has only sunk further, with destitution, despair and anger rapidly increasing. As the rank of those who must sleep and defecate outside constantly swells, Washington still doesnât give a shit, but why should it? Theyâre getting theirs.

Inside the Beltway may be a swamp, but itâs a gilded one, designed for the most arrogant and smug. Outside, the quicksand ocean keeps on devouring.

Game over, I heave these toss away lines during garbage time, but enough of this, for I must return to my daily tons of garbage. The future is indeed plastic. From the end of the world, I watch various endings.

The Mob Did Not Win!
The Saker
• 259 Comments • Reply
← End of the World vs. Center of the Univ...Walled Communities, Shopping Fortresses... →
All Comments Hidden • Show  308 Comments • Reply
Personal Classics