Five weeks ago, it looked like war would break out in Europe. With up to 150,000 Russian troops massed on the Ukrainian border, The Saker concluded, âIn my professional opinion, what I see is a joint preparation by the Ukronazis and the USA (along with the UK and Poland) to attack the Donbass and force a conflict upon Russia [â¦] It is very hard for me to see how a war could be avoided.â Yet nothing happened.

Though weâre again settled into a lull, who can doubt there will be a war, soon enough, between the US/Israel against Arabs, Iranians, Russians or Chinese?

Though the Saker and Taxi are invaluable observers of their regions, theyâre not Putin or Nasrallah, so can only interpret after the fact. Deception is a key part of war, so weâll be juked by a few more jabs, feigns and side steps, perhaps, before a hellish chasm suddenly swallows a bunch of us.

One second, youâre bored to death. The next, youâre curled up, almost peacefully, with too many holes to count, or maybe itâs time to turn on the TV to watch more explosions.

Thereâs one easy prediction, though. The US is just about done as a world power, society, economy, concept or even joke.

In a recent article, Paul Craig Roberts invited us to compare military recruitment videos from Russia, China and the US. The first two stress the masculine fearlessness of its fighting men, while the last is an anime, I kid you not, with a squeaky voiced female recounting how she became a soldier, âIt began in California, with a little girl raised by two moms.â

Here in Albania, though, most havenât gotten the news the USA is allowing itself to be systematically castrated and lobotomized by its Jewish masters. America is still number one.

This week, I encountered a thick, syrupy dose of this adoration in Kukes, a mountain town in Albaniaâs northeast corner. On the bus from Tirana, I could see a sign with the Stars and Stripes, âHOTEL / RESTORANT / Bar / WELCOME TO âAMERIKA.ââ

Here, at last, was the legendary Amerika, with its Statues of Liberty everywhere, on its faÃ§ade, roof, behind the bar, over the elevator door and sugar packets, etc. There were only Albanian and Italian beers, however, plus Corona, which was dismal enough. Mercifully, there was no Bud, Miller or Coors. 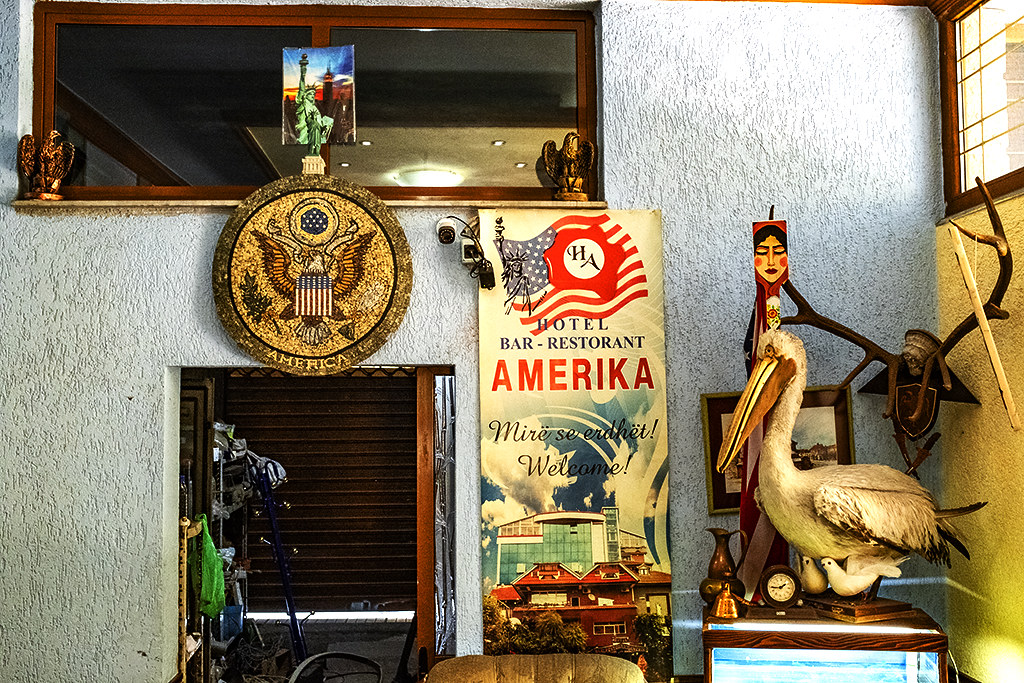 There was also no American dish on its menu, so what made this joint âAmerika,â exactly? Just the name, and all the Statues of Liberty, plus a few odd photos of NYC. As in the USA itself, America was but a rumor or mirage here, and thatâs good enough. 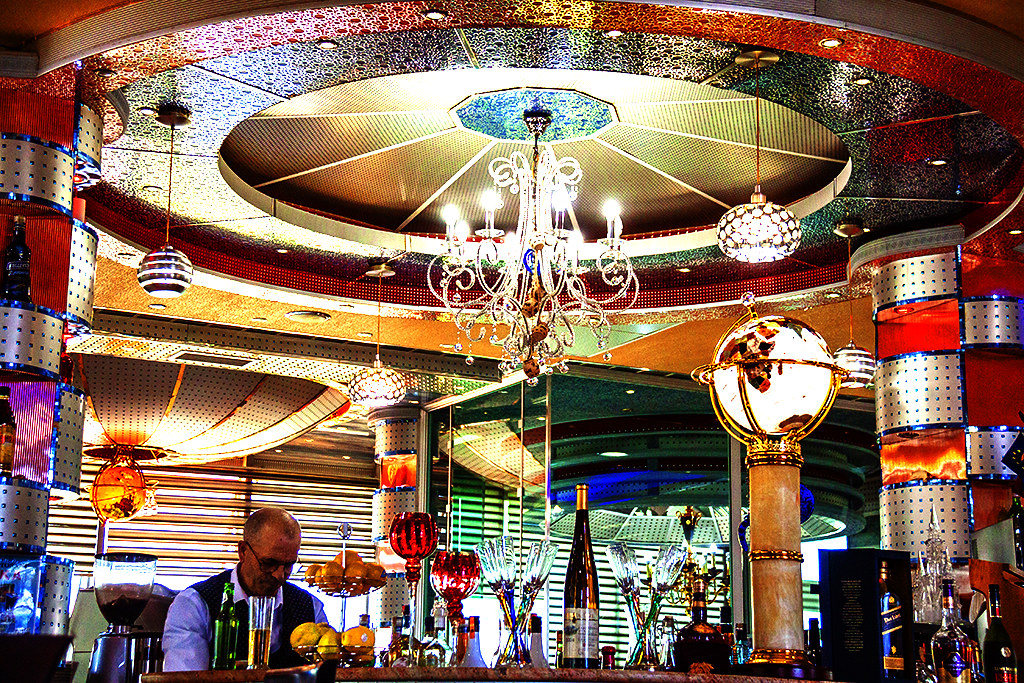 On the 7th floor, there was a bar so kitschy, with lots of colored, reflective surfaces and embedded beads, locals could imagine themselves to be in Las Vegas, I suppose. Pricey bottles of liquors were displayed on niched columns. A chandelier with many curling branches hovered over the vested bartender. Rotating, a glass globe flaunted so many inaccessible destinations. Despite such splendor, a bottle of Korca was only \$2.

A room in Amerika was \$37 a night, not bad for the Shiny City on the Hill, Albanian version. Checking in, I handed a waiter my blue passport. Blurting out something, he held it up for others to admire.

None of them had been there, but one. A man at a nearby table said he had visited Troy, New York, Atlantic City and Albany, a rather odd selection.

His English was so perfect, I didnât suspect it, and he didnât even look Albanian. A sales rep for a multinational, he had been educated in Italy. He would love to drive from New York to Los Angeles, he said.

âThatâs too far. You should just go to Texas, then drive to Los Angeles. The Southwest desert is amazing. When I was there, I just felt so free, like an animal!â

Of course, that sounds stupid, but I just wanted to slither into a thorny bush.

On an Amtrak years ago, I talked to a man from El Mulato or Lajitas, Texas. (The latter had a beer-drinking goat as the mayor.) He had just been to Phoenix. Looking shell-shocked, he simply sighed, âI canât wait to get back to Lajitas.â

Now, if I was a permanent lizard in West Texas, Iâd likely fantasize, each night under a million stars, about Sunset Boulevard and the Lower East Side. 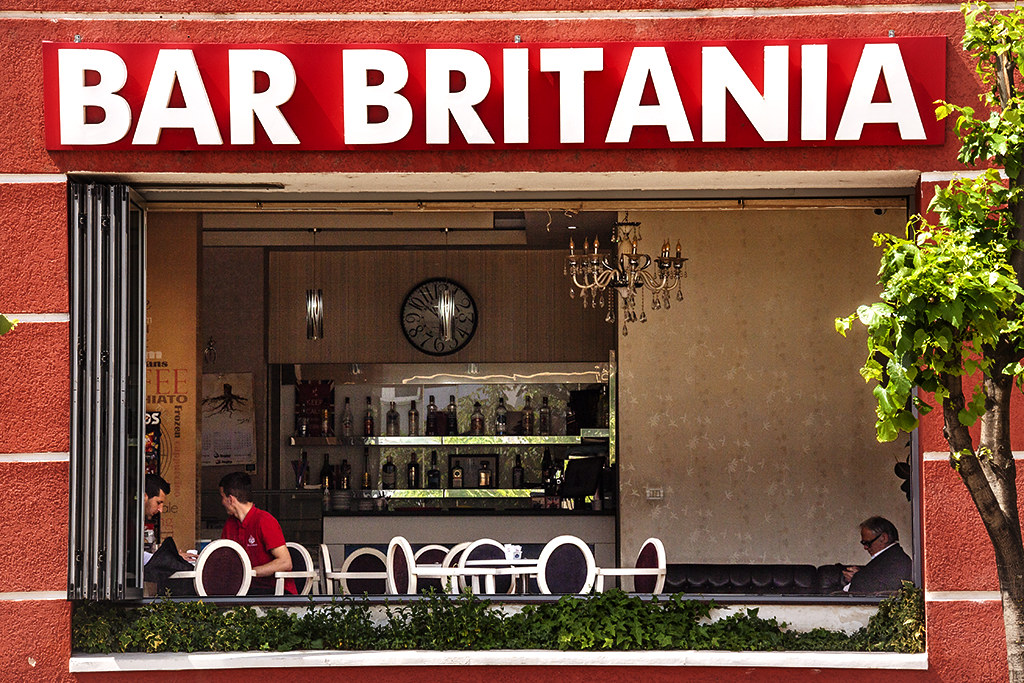 Many Albanian cafÃ©s are named after foreign places, so in Kukes alone, thereâs the MÃ¼nchen, Berlin, Britania [sic] and New York. Since most Albanians live in rather drab tenements, they need to be transported to Oslo or Paris, sort of, just by walking into a cheerful cafÃ© with exotic photos, just down the street. In almost none will you find images of Albania, for the whole point is to escape.

At the confluence of two clean rivers, and with jagged, snow capped mountains as a backdrop, Kukes has many spectacular views. Seen every day, though, heaven itself can get tiresome. God, is that you again?

Kukesâ most exceptional feature is out of sight. Fearing an invasion from Yugoslavia, Hoxha ordered a duplicate Kukes to be built underground. Meant for 10,000 people, it was nearly complete when the dictator died.

Each evening, Kukesâ main street is closed to traffic, so locals can enjoy a festive passeggiata. Kids ride bikes, some still with training wheels. Marching three or four abreast, teenagers eye each other. Hunching slightly forward, with their hands behind their backs in that curiously universal manner, the old amble.

I saw two carts with a hand-cranked popcorn maker, heated by a small flame. Too excited with his treat, a small boy spilled nearly a third of it on the sidewalk, but taking it like a man, he refused to cry. Albanian for popcorn is charmingly âkokoshka,â by the way, with no relation to Oscar.

A more credible presentation of the USA is American Corner. Housed in Kukesâ House of Culture, itâs basically a library, and a pretty damn good one for its size, with even Cormac McCarthy, Don DeLillo, William T. Vollmann, William Gaddis, Denis Johnson and Nathaniel West, etc., among its literary titles.

I didnât see any book by Obama or Michelle, but they had likely been checked out. With his grinning face on the thickish spine, Bill Clintonâs My Life was on a shelf, and so was Transgender Voices. 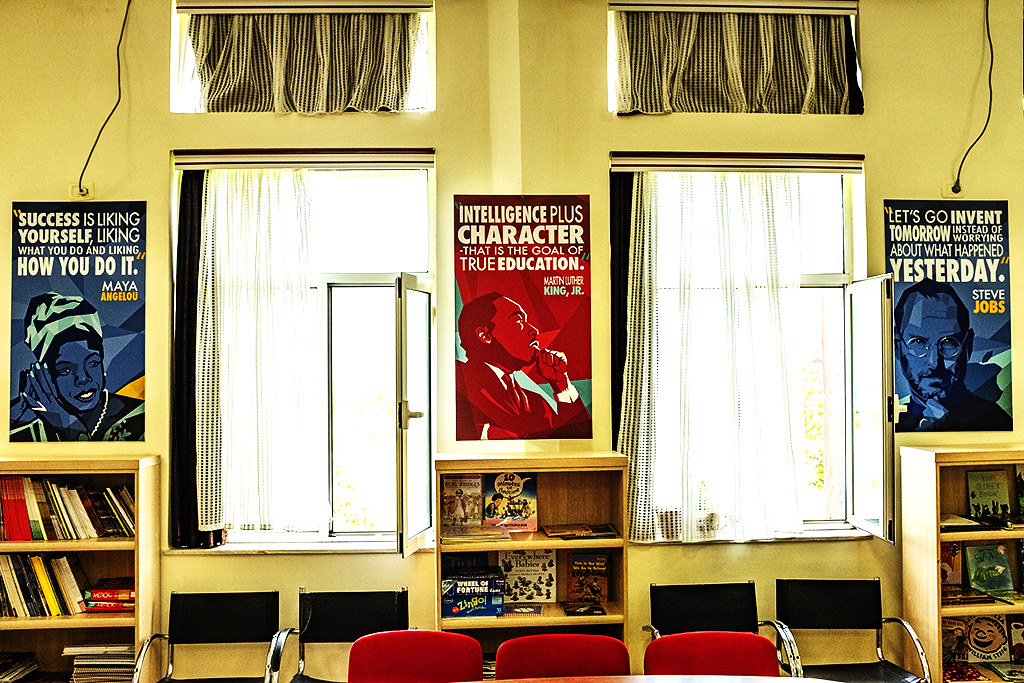 There were posters of Maya Angelou, Martin Luther King and Steve Jobs, each with an inane quotation.

Angelou, âSuccess is liking yourself, liking what you do and liking how you do it.â

King, âIntelligence plus characterâthat is the goal of true education.â Iâd think you can teach knowledge, and maybe even wisdom, but not intelligence.

Jobs, âLetâs go invent tomorrow instead of worrying about what happened yesterday.â 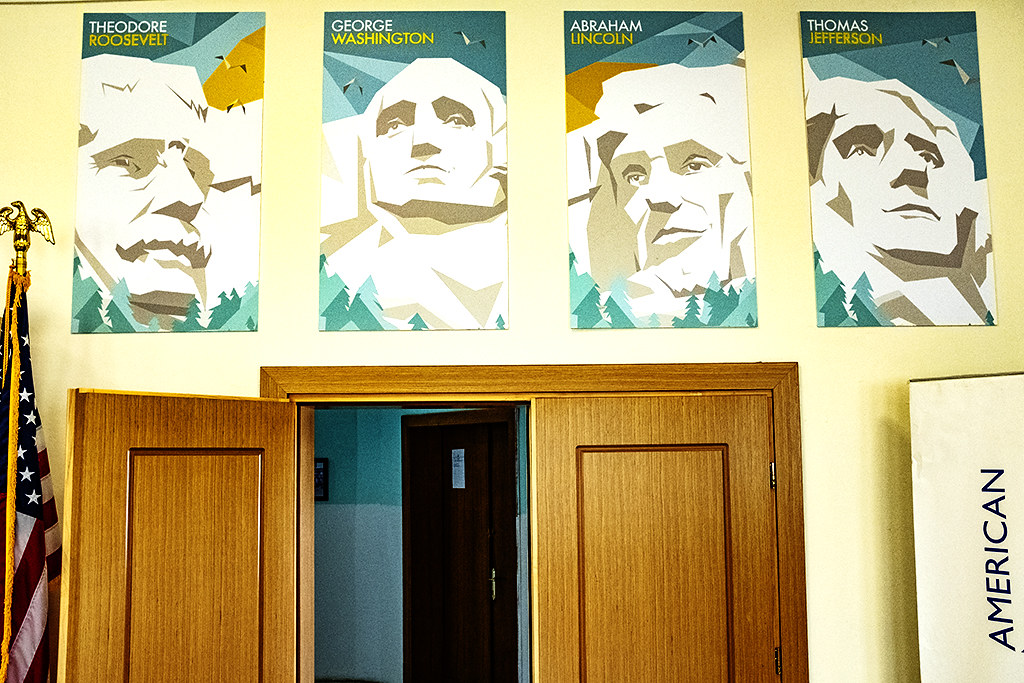 Over the door were posters of Teddy Roosevelt, Washington, Lincoln and Jefferson, as they appear on Mount Rushmore.

On a table was a styrofoam Statue of Liberty, and a styrofoam disc with the Albanian double-headed eagle superimposed on an American flag. Another kidâs project had two white doves holding up the American and Albanian flags as a single styrofoam block. Visually, the two nations are equal, and even intermingled, for on its styrofoam base is the Albanian eagle surrounded by four American flags.

At an amusement park in Fier, I had already seen the Albanian eagle on the Stars and Stripes, and in Tirana, I had spotted a graffiti of âUSAâ spray-painted above the shape of Albania. Itâs very weird, this strained, one side coupling, with only one partner cooing.

Many Albanians are grateful to the USA for its intercession during the Kosovo War, but they forget that it was the American alliance with Stalin that condemned their nation, and half of Europe, to all those decades of Communism.

Though Serbs were demonized as crazed ethnic cleansers, they were only reacting to Croatian and Albanian nationalism, as abetted by Uncle Sam. Americaâs aim was not just breaking up Yugoslavia, but weakening Serbia, an Orthodox nation with historical ties to Russia. The bombing of Belgrade without UN sanction was also a precedent for later âhumanitarian interventions.â

In Foolâs Crusade, Diane Johnstone points out that the first planned massacre of civilians in the last Balkan War was committed by Croats on Serbs, in Gospic.

Only eight miles from the Kosovo border, Kukes hosted hundreds of Kosovo Liberation Army fighters, and many thousands of refugees. There is a memorial tower with some gruesome photos of Albanian victims. One shows a traumatized boy chewing on a shoe.

I asked my guide, âDo Serbs ever come here?â

âNo, only to the [ethnographic] museum [next door]. They donât go into the tower.â

(At the Hezbollah-run museum in Mleeta, Lebanon, a guide told me they even had Jewish visitorsâ¦)

âYes. I even have some Serbian friends. What happened was geopolitical. Itâs not personal.â

In Belgrade last year, my Serb landlord told me he often went to Albanian-majority Kosovo to hike its mountains, and there was never a problem. Like the Kukes guide, though, heâs an exception. 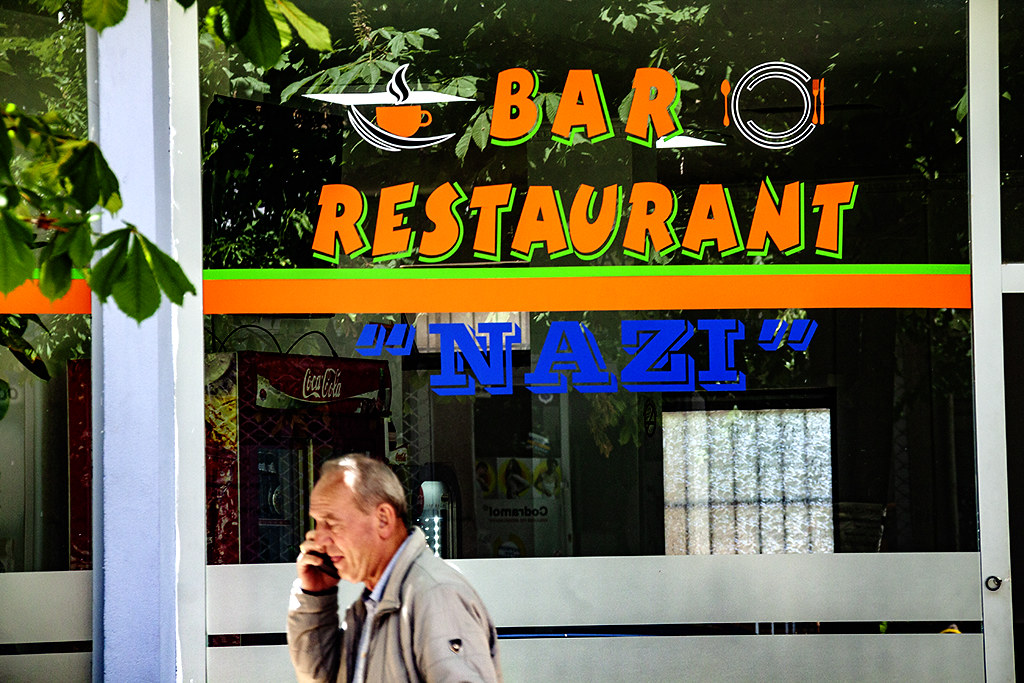 Back in Tirana, I almost wish I was still in Kukes, it was so calming. There, I also found a great place for cheap hot meals. Its beans with beef shank is comfort food at its best. What initially caught my eye, though, was its name, Bar Restaurant âNazi.â

Pronounced Nor Zee, itâs only the ownerâs name. Not everything is anti-Semitic, but when it is, there just might be a valid reason, such as what has gone on, for way too long now, in Palestine.

With Taxi and so many others, I canât wait for it to be over. The Freest and Most Open Country
Linh Dinh
• 276 Comments • Reply ← Love of Raki, High Jumping Goats and Ed...Dear Albi →
Current Commenter
says:
Current Date at Time Now
Leave a Reply - Commenters who are not discussing the article, but are only indulging in ad hominem attacks, will not be tolerated.
Cancel Reply
Commenting Disabled While in Translation Mode