Jenny's Place, 2018
◄►Bookmark◄❌►▲ ▼Toggle AllToC▲▼Add to LibraryRemove from Library • BShow CommentNext New CommentNext New ReplyRead More
ReplyAgree/Disagree/Etc. More... This Commenter This Thread Hide Thread Display All Comments
AgreeDisagreeThanksLOLTroll
These buttons register your public Agreement, Disagreement, Thanks, LOL, or Troll with the selected comment. They are ONLY available to recent, frequent commenters who have saved their Name+Email using the 'Remember My Information' checkbox, and may also ONLY be used three times during any eight hour period.
Email Comment Ignore Commenter Follow Commenter
Search Text Case Sensitive  Exact Words  Include Comments
List of Bookmarks

The jokes about New Jersey keep coming. It has the third highest taxes in the country, yet ranks dead last in fiscal health. Its most successful residents flee.

Those who have never been to New Jersey still sneer at it, thanks to its mostly horrible depiction in the media, as in Jersey Shore, where a cast of morons defame both the state and Italian-Americans.

In a South Park episode, Stan Marsh rants, âHaving neighbors from New Jersey is the worst. All night long, they keep me awake. Theyâre either screaming at each other, or making some disgusting sex sounds. It seems that all people from Jersey do is hump and punch each other!â

Living in South Philly for decades, Iâve had a different perspective on New Jersey. Itâs where the beaches and boardwalks are, a vacationy place, and where South Philadelphians move to, an upgrade from their tight rowhomes. Jersey also has a bunch of charming and fascinating towns, Bordentown, Pitman, Moorestown, etc., each one distinctive. Of course, there are also hollowed out ghettos, and too many sterile, strip malled bedroom âcommunities,â with the local Wawas or QuickCheks their main social hubs.

After each Alcoholic or Narcotics Anonymous meeting, Wawa Warriors can shoot the shit in their favorite convenience storeâs parking lot, with all their worldly needs just a glass door away. Driving by in the dark, you can still see them standing there, because thereâs nowhere else to go.

Many Jersey towns are dry, can you believe it?! Luckily, you can always booze up at the very next town. My favorite bar in the entire world is Billy Boyâs, in the Pine Barrens. I wouldnât mind just moving into that super fine establishment. They make an honest mashed, sell a dozen steamers for just eight bucks and their tacos are only a dollar each on Tuesdays. In spite of everything, thereâs still comfort, quality nutrition and probity left in the world!

Oh, how can the universe not be eternally grateful to New Jersey for gifting it Frank Sinatra, Valium, John Travolta, disco fries and nobody Chuck Wepner, who actually floored Muhammad Ali (by stepping on his foot)?! That fight was billed as âGive the White Guy a Break.â

PayPal me, Governor Murphy! Iâm doing my best to send clueless tourists your way, and Iâm not talking about drunk Quebecois either. They donât need no advertising!

Itâs hard to believe, but I only have three weeks left in this country, so even Philly will dissolve soon enough, much less New Jersey. Last week, I likely saw its beaches for the last time, and on the way back, I stopped in Millville, a town I had never seen.

Before Mike Trout made Millville famous and cool, it was dismissed as just another depressed Jersey town, with one website, HomeSnacks, even crowning it as the redneck capital of the state. 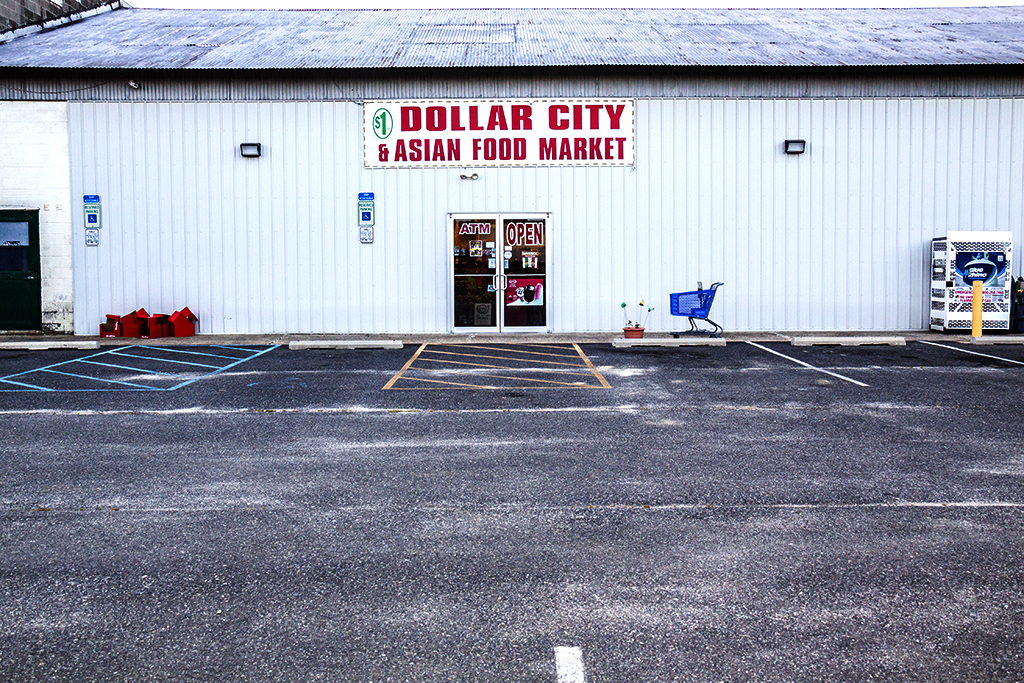 What stopped me was Jennyâs Place, a bar with a wide, stark frontage, and a dollar store/Asian food market in the back. It appeared a supermarket had been converted. A large and mostly empty parking lot accentuated its barren loneliness. On the edge of town, it was surrounded by nothing.

Walking in, I found an old white guy at the bar, and a Chinese man behind it. There were three pool tables. The beer choices were limited and lame, with Stella Artois the only fancy option. Photos of happy clients, plus one of George and Laura Bush, jammed the back wall, above the liquor bottles. Potato chips, corn chips, beef jerky and sausage sticks were all there were to soak up the suds.

By and by, many folks came in, black and white, with most there to shoot pool, and some were awfully good, too, though none could beat Chang Liu, the bar owner. Casually, he would clean up each table, at the first opportunity. 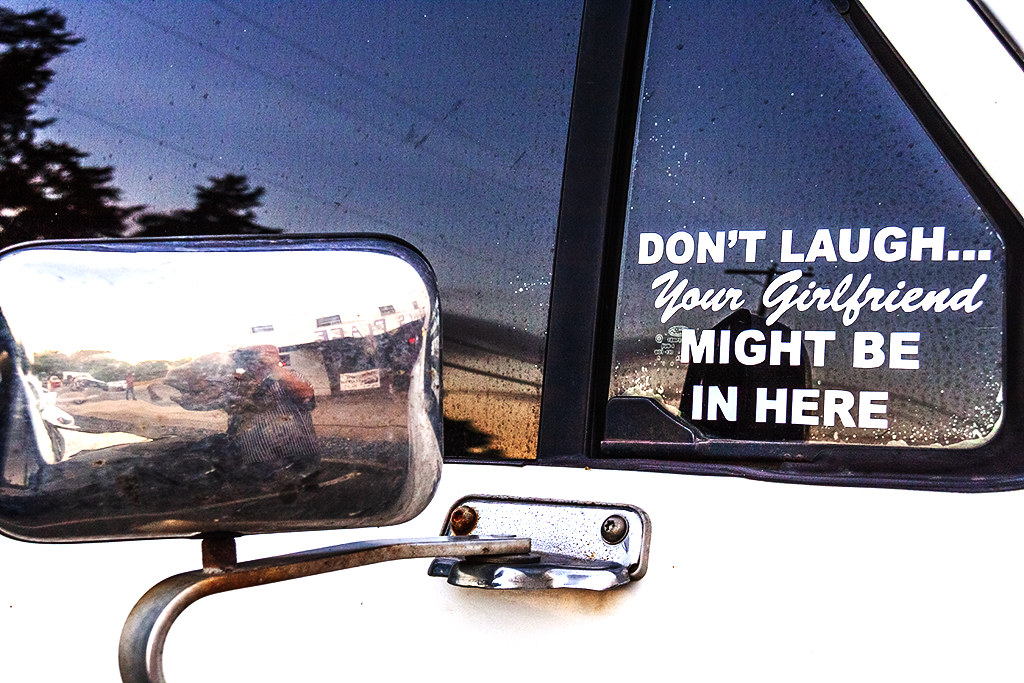 A white guy arrived in a white truck, with âPRIVILEGEâ in white stickered onto the rear window. On a side window, there was, âDONâT LAUGHâ¦ Your Girlfriend MIGHT BE IN HERE.â

A black biker showed up on an asskicking Harley, with rap liberally blasting ânigga,â which prompted Chang to ask, âWhy you play that, man? What if a white guy call you a nigger?â

âMy white friends call me nigga all the time, Chang! There is a difference between âniggaâ and ânigger.ââ On CNN in 2013, Trayvon Martinâs girlfriend, Rachel Jeantel, explained exactly that to Piers Morgan.

Though Changâs dollar store/Asian food market at the back was completely untended, there was a bell at the bar to alert him should someone walk in, and a monitor to show when a customer was ready to pay. A convenient door between the bar and store allowed Chang to quickly run back and forth. In any case, it didnât look like the sea of made-in-China junk had many takers. Jennyâs Place pays his bills.

Five-eight and fat-free, Chang had a scowl even when he smiled. Always ready to spring, he was like coiled lightweight. Although his English vocabulary was adequate, Changâs accent was still thick, and he often chopped the s from the end of words.

There are many bars here. Larry, Bojo, Railroad Tavern, Old Oar, this place. There are five, but there used to be ten!

I start out in New York, then I move to north Jersey, then central Jersey, and now Iâm here, in south Jersey. I had a store and a restaurant in Wildwood. Chinese food. I work for other people, making Chinese, Italian, French, American food. Making food is hard. Iâm sick of it. The health inspector. Itâs too much trouble. Thatâs why I donât make food here.

When I open this bar, the people here didnât like it. They say, âHey, you Chinese and you own this bar?â They gave me problems the first five years, but you have to be strong. I beat up a tough guy. Once you do that, then they scare. If you beat up the meanest, toughest guy, then the average, the little guy, he think, I better not mess with that man!

Millville used to make glass, but the factories are gone. Two went to China. One to Mexico.

I have two son, one daughter. My son, they study at Drexel. Mechanical engineering and electrical engineering. My daughter study dermatology. She want to be a, ah, aesthetician. She has two kids. Her husband has a good job. Sheâs OK.

My wife help me out here. Sometime, I hire a local for a day.

I been here 31 years. If you want me to go to another country and fight, I wonât go. Why?! If somebody invade this country, then I fight, because this is my country. Yes, Iâll fight to defend it.

Ming Dynasty. Zheng He, he went everywhere, went to Africa, but did China take anything, beat you up, make you a slave? No! China help you. You donât have this plant? Here is some seed. China donât steal anything. China help you.

Look at Spain. Itâs this big, but it took over half the world. China is not like that.

Iâve been to nine country. Only in Asia. I donât travel much. I have no time.

I donât like people from Japan. When I play a tournament in Las Vegas, the Japanese guy want to shake my hand, but I turn away, like this. Ha, ha!

Japan treat Chinese people terrible. I understand that everybody is terrible in a war, everybody, but I still donât like people from Japan.

Before, you send money to China, but now, they send money to you! Thereâs more money there. If you want to buy a store, and you need one million, two million, and you donât have it, you call your relatives in China and say, âHey, please help me out here.â Thatâs how it work now.

If Iâm 20 something, I stay in China, work there, make money. You know the culture, the language, how they think. Itâs easier there.

If I meet another person from Fujian, he will know somebody that I know, so we trust each other. Weâll help each other out. Thatâs how it work.

If a person from Fujian move somewhere, he will bring more people from Fujian. Thatâs how it work. All the Chinese in Africa are from Fujian!

Before, the Chinese government stop people from leaving, but now, they say, âGo! Go!â so you find Chinese people everywhere.

All empire collapse. They go up, down. They all go down. The US is almost done. When US go down, I go back to China.

I say this to everybody, and they all agree with me. Just ask them! They all say, Yeah, the US is going down.

← Postcard from the End of America: Lanca...Last Philly Glimpses → The Great Replacement in Switzerland
Guillaume Durocher
• 112 Comments • Reply
← Postcard from the End of America: Lanca...Last Philly Glimpses →
Hide 195 CommentsLeave a Comment
"Obscured American: Chang the Owner of Jennyâs Place and Dollar City"
• 195 Comments
Commenters to Ignore
Commenters to ignore (one per line)

← Postcard from the End of America: Lanca...Last Philly Glimpses →
Current Commenter
says:
Current Date at Time Now
Leave a Reply - Comments on articles more than two weeks old will be judged much more strictly on quality and tone
Cancel Reply 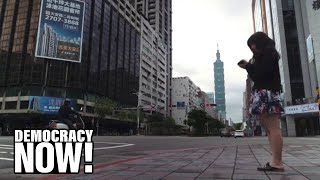