Cape Town, 2021
◄►Bookmark◄❌►▲ ▼Toggle AllToC▲▼Add to LibraryRemove from Library • BShow CommentNext New CommentNext New ReplyRead More
ReplyAgree/Disagree/Etc. More... This Commenter This Thread Hide Thread Display All Comments
AgreeDisagreeThanksLOLTroll
These buttons register your public Agreement, Disagreement, Thanks, LOL, or Troll with the selected comment. They are ONLY available to recent, frequent commenters who have saved their Name+Email using the 'Remember My Information' checkbox, and may also ONLY be used three times during any eight hour period.
Ignore Commenter Follow Commenter
Search Text Case Sensitive  Exact Words  Include Comments
List of Bookmarks

In boxing, there are bangers and dancers, but the very best, a Meldrick Taylor, say, could concuss and rupture yet still pirouette with finesse. If you waltz too much, youâll lose fans. Even with a perfect record of 50-0, cake walking Floyd Mayweather has detractors.

South African Corrie Sanders was no juking pussy. Although his main passion was golf, âThe Sniperâ had enough balled viciousness to crumble opponents, including Wladimir Klitschko, with a hammering left. Retired, Sanders was murdered by three young Zimbabweans during a robbery at his nephewâs 21st birthday party. Shielding his daughter, the bleeding Sanders told her to pretend to be dead.

The Guardian quoted the widowed Nobel laureate, âOne grabbed me and had his arm across me. It was a muscular, smooth arm and I thought, âShouldnât there be a better use for these hands, this arm than robbing an old woman?â What a waste of four young men. They should have jobs [â¦] He pulled off my ring. He held me tight, against his chest. I was very close to his face and could see he had very little beard. He didnât shave often. I would put his age at 18 to 22.â

Gordimerâs solution, âSouth Africa needs a huge jobs program, like what Roosevelt did in the United States. That will prevent youth from turning to crime.â 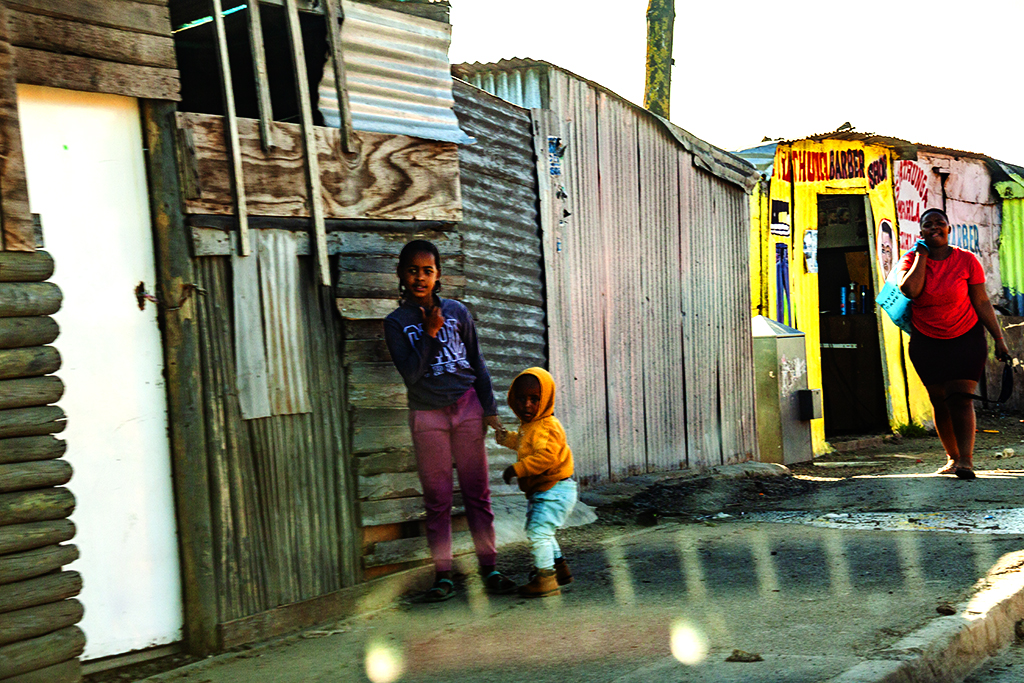 In Cape Town, the poorest are generally in the black townships, with many living in shacks. The homeless, including coloreds and whites, can be seen in nearly all neighborhoods, however. On Longmarket, they collapse, with chichi Tjing Tjing and Mochi Mochi just across the via via. They sleep right outside the grand Parliament complex, with its equestrian statue of Louis Botha, âFARMER / WARRIOR / STATESMAN.â Despite protests and vandalism, Bothaâs still riding high.

At many intersections, there are beggars, with some wearing shirts advertising businesses even. In Bellville, two white women approached me, with one pleading, âWe are decent people, but my mother is sick today.â Following me for a block and a half, a colored man kept hustling me for more change, so he could buy milk for his baby, he claimed. A young black man with carved giraffes stated, âIâm not a beggar, Iâm an artist, but Iâve made nothing today. Please give me something, sir, for my baby?â

There are also âcar guardsâ who will direct a motorist to a parking space, help him park, rather unnecessarily, Iâd think, then watch over his car, for a small tip. If youâre rude to one, he might just run a key along your gleaming BMW. As a rule, though, theyâre unintrusive, courteous and donât beg. Seeing all these black men in yellow reflective vests, I had mistaken them for municipal employees.

Though bad enough, Cape Townâs homeless crisis is not as visible as, say, in Los Angeles or San Francisco.

One day before dawn, I walked two miles from Kloof to the taxi van depot. In the dark, I passed a bunch of people, all black, going to work. Three young women cheerfully chattered.

On Upper Orange, stately houses lurked behind tall walls topped with electric fencing. Cold enough, I hunched. From inside a crude, weather-beaten tent, a man and a woman muttered. 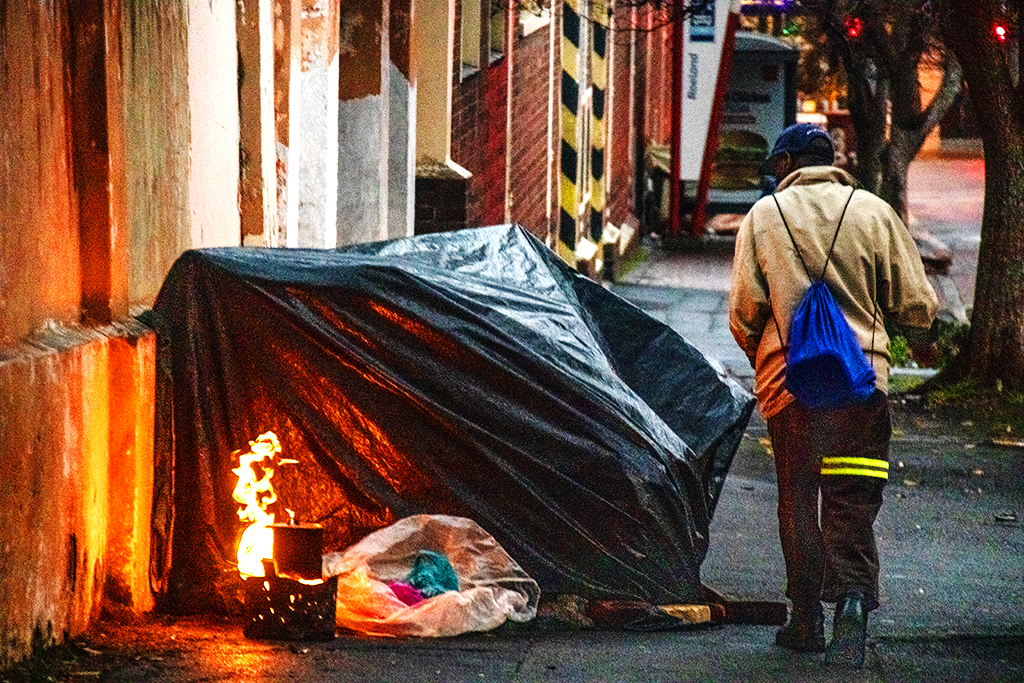 On Buitenkant, there was a wood fire under a battered black pot. From the plastic-covered dwelling next to it, a stooping, thin crone emerged. Down the sidewalk, more disheveled hovels slumped.

At a bus stop, a McDonaldâs ad for its Grand Chicken Special seemed like a taunt, almost. What a lusciously lekker stack! Iâve seen homeless of all colors digging through trash cans for food.

Like in most European cities, Cape Townâs downtown is anchored by its train station. This has become a shell of itself, however. None of the electric departure and arrival boards work. Tracks are mostly forlorn, there are few shops and the outside has become an open black market, with vendors selling fruits and vegetables.

With voodoo, you can be free of consequences, physical shortcomings or even the universal curse of losing this and that, until you lose everything, so give me a call, eh? I can cure you of all but the âpainful exit.â 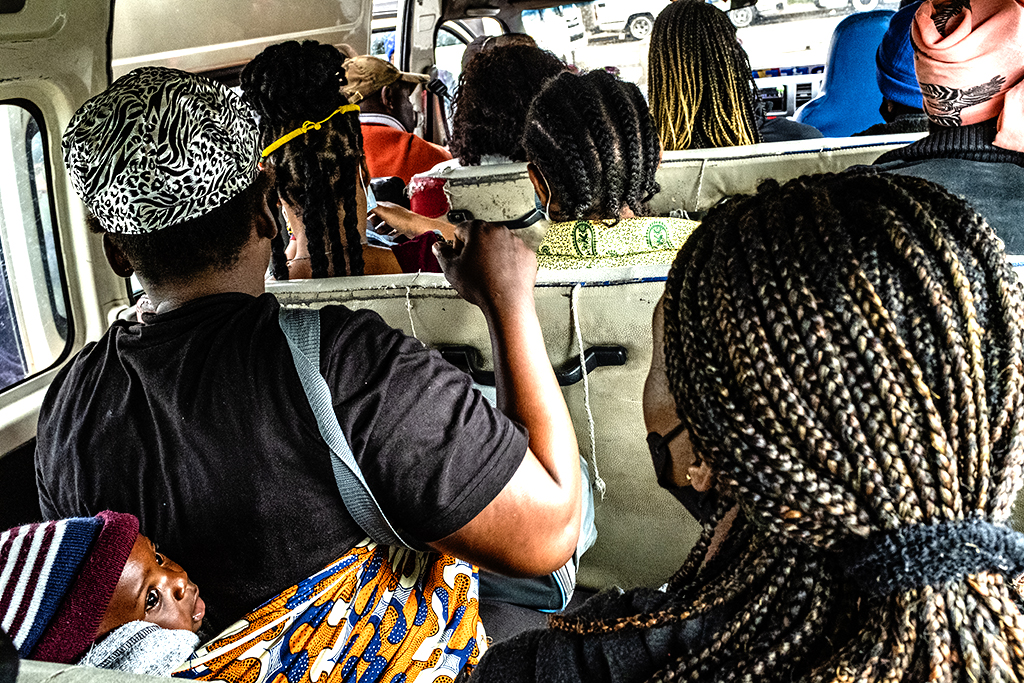 Next to the train station is the taxi van depot, a spot Iâve become familiar with, since thereâs no cheaper way, by far, to get around this vast metropolis. Each van I get on, Iâm the only non-black, interestingly, although whites, Iâm sure, must hop on one of these, I donât know, once every decade?

Whatever, itâs good to be accepted. Although the legal limit for each van is 15 passengers, they routinely pack in two or three more, so weâre always sitting shoulder to shoulder.

Having taken buses and vans my whole life, I know damn well why theyâre so comforting. For the duration of the trip, you donât have to do anything!

Even if you have the shittiest job, youâre not there yet, so the funky van is a blessed reprieve. Plus, thereâs much to see out the windows, almost too much, and youâre with people who love you!

Well, maybe not, but at least they wonât kill you while youâre all jammed inside a stuffy steel box thatâs redolent of body oils and arm pitsâ¦ Weâre all the same, dude, and heading in the same direction, until you get off, that is, so hallelujah! 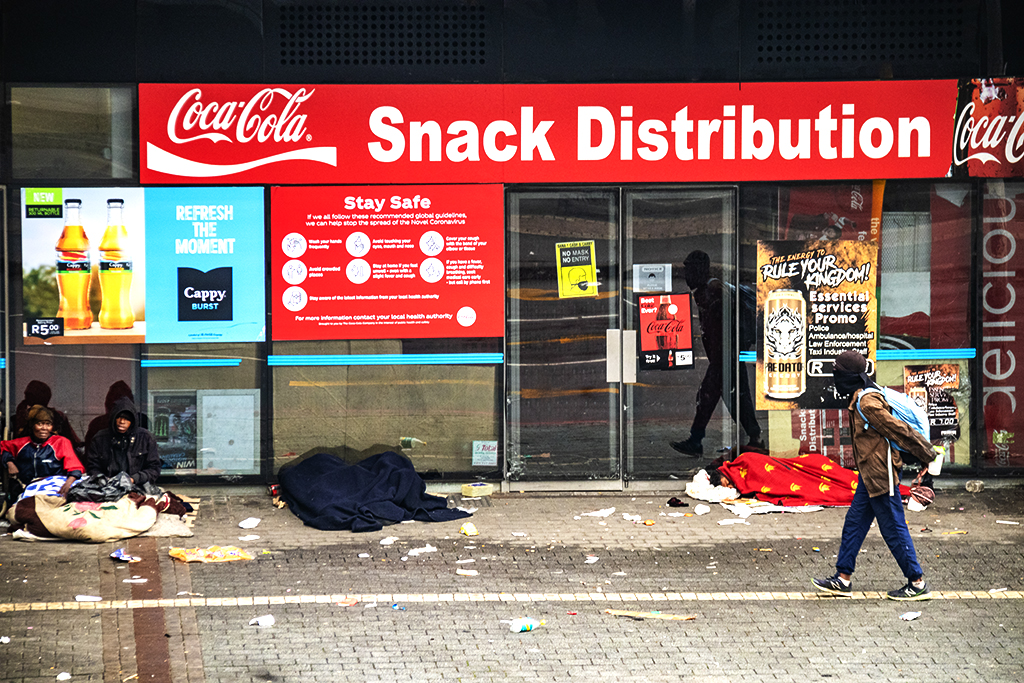 Before you can get on a van, though, you must cross a yard that often reeks of piss, for hundreds of homeless people live around there. All over Cape Town, there are many cracked windows and glass doors, but on Strand, youâll see even more of them. Vandalism is a leading South African sport, apparently.

A current headline, âService delays due to attacks on electricity staff.â Utility crews are being assaulted in the black townships of Gugulethu, Nyanga, and Khayelitsha, but why?! You tell meâ¦

Since January of this year, 83 taxi van drivers in Cape Town have been killed by a rival company. This is common across South Africa. In 1999, for example, 268 drivers were killed nationwide, and 287 injured.

Reading about Cape Town trains being set on fire, I asked a colored man why? He was sure itâs done by taxi van companies to cripple the rail system, âso everyone will have to ride taxis.â

He also warned me to never take the local trains, not even to picturesque Simonâs Town nearby, âThey see you as a foreigner, theyâll rob you.â

âBut arenât there security people on the train?â

âThey wonât do anything. Theyâre scared. They donât have guns.â 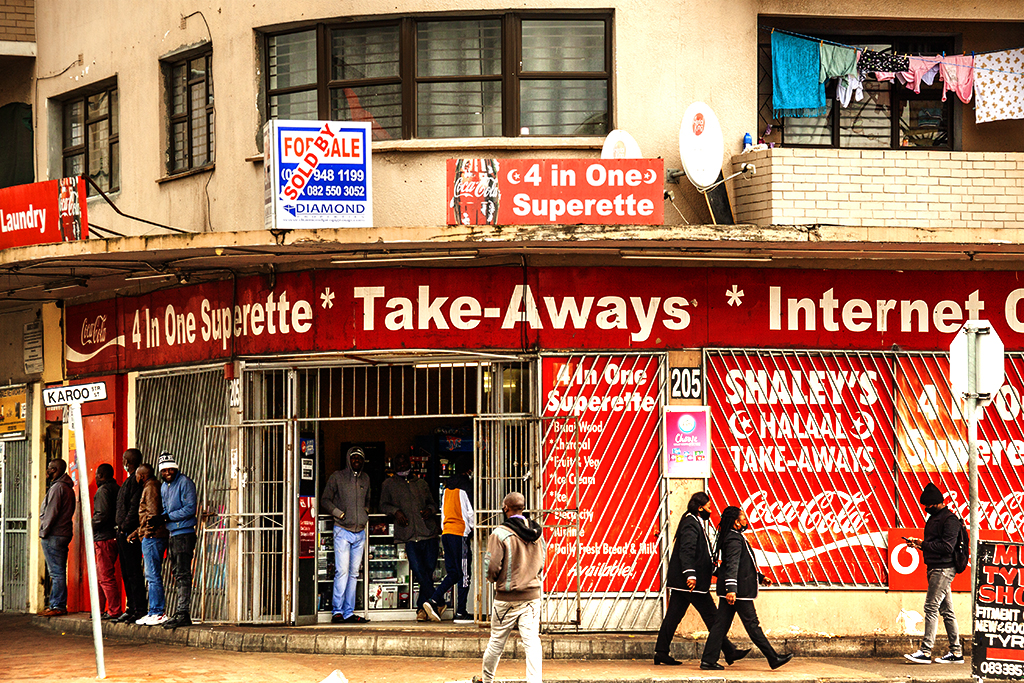 Driving their own cars or taking Uber, most whites can sidestep much of this madness, you see, and they never frequent any of the dumpier neighborhoods Iâve been snooping around.

During Apartheid, whites preserved the best locations for themselves, and these choice neighborhoods are still their retreats and playgrounds, with very few blacks encroaching. Many, though, do march in daily to clean.

Cecil John Rhodes famously declared, âThe hinterland is there,â meaning the rest of Africa was there to be conquered, so the white man could rule from Cape Town to Cairo. Wayward America, with its queer, ignorant mutts, would be retucked into the British folds.

Although your frontier is only a few miles away, you donât even have to sniff it. Itâs already conquered.

Uphill from Kloof is Higgovale, where most houses are worth over a million bucks. Modern, spacious and distinctive, theyâre tucked into tastefully landscaped settings, with towering trees, cutesy shrubs and elegant lawn furniture. There are no shops or restaurants in Higgovale to attract riff-raff, beggars or the homeless.

Driving down into the messy city, you can see the ocean laid out in the distance. Sighing whitely, you can think beautiful white thoughts about your brilliantly white future. 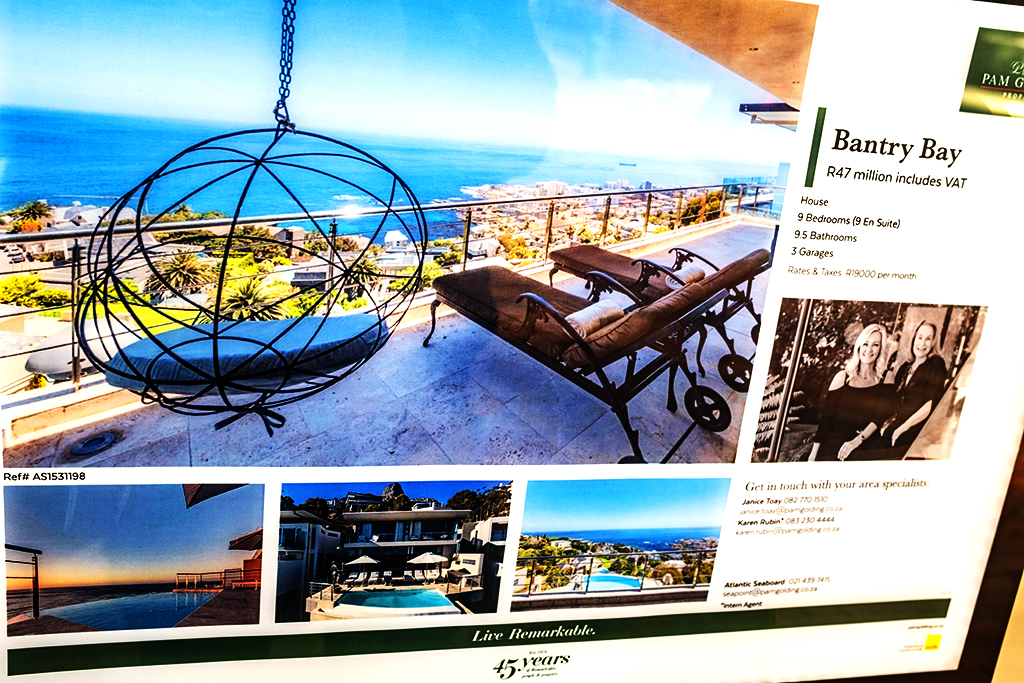 If you have more than a few coins, though, Iâd recommend a comfy, well-ventilated pad with 9 bedrooms and 9 1/2 bathrooms, right on Bantry Bay, for just \$3.2 million. You better call soon, though, before some Jew, Arab or Chinese steals this from you!

From your long balcony, you can scan humping black whales and sunning white babes, as you sip your Columella Red. Allowing yourself a bit of smugness, you congratulate yourself, for just a second, for being no white pussy.

You donât whine, you act, and fuck the rest.