Arnoun, Lebanon, 2020
◄►Bookmark◄❌►▲ ▼Toggle AllToC▲▼Add to LibraryRemove from Library • BShow CommentNext New CommentNext New ReplyRead More
ReplyAgree/Disagree/Etc. More... This Commenter This Thread Hide Thread Display All Comments
AgreeDisagreeThanksLOLTroll
These buttons register your public Agreement, Disagreement, Thanks, LOL, or Troll with the selected comment. They are ONLY available to recent, frequent commenters who have saved their Name+Email using the 'Remember My Information' checkbox, and may also ONLY be used three times during any eight hour period.
Email Comment Ignore Commenter Follow Commenter
Search Text Case Sensitive  Exact Words  Include Comments
List of Bookmarks

Traveling is not just a shifting of the body, but a reorientation of the mind, so here in Lebanon, I canât help but think about Islam, because Iâm surrounded by Muslims, and the fajr call to prayer wakes me each dawn.

Iranâs most advanced missiles are called Fajr, by the way, a mere coincidence, Iâm sure. Dispatched to Hezbollah, they have been used to rouse Jews.

Before Lebanon, I was in North Macedonia, and there, my friend Alex would refer to Muslim calls to prayer as âTarzan five times a day.â As a Christian, Alex resents Muslim encroachment onto his physical or mental space. There is a turf war there, with churches and mosques springing up to assert each campâs territories. Some old churches are even marked by new giant crosses to declare, âWeâre still here.â

In 2016, Israel banned three East Jerusalem mosques from broadcasting their fajr calls to prayer. Netanyahu explained, âI cannot count the timesâthey are simply too numerousâthat citizens have turned to me from all parts of Israeli society, from all religions, with complaints about the noise and suffering caused to them by the excessive noise coming to them from the public address systems of houses of prayer.â 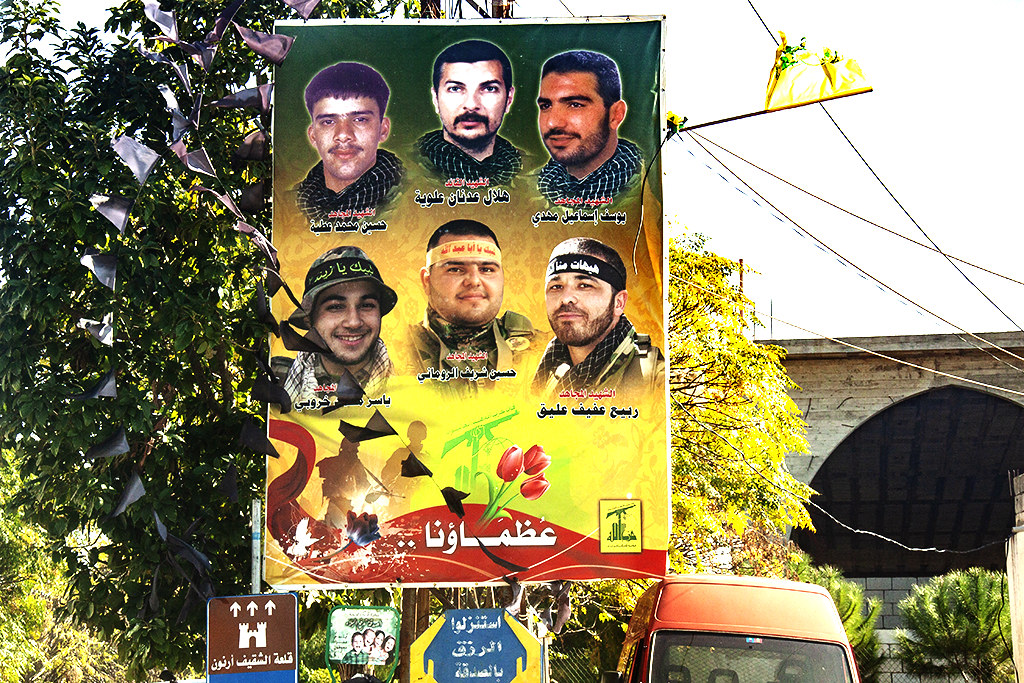 Being in Lebanon forces me to think even harder about Israel, naturally, and not just because Jewish jets fly over my head several times a day. For two generations already, Lebanon has been warped and menaced by Jews, when not outright destroyed by them, with its cities bombed and civilians massacred. In every village or neighborhood, there are public portraits of men, mostly young, who died fighting Jews, and the closer you get to Occupied Palestine, the more numerous these faces appear.

Once the jewel of the Middle East, Beirut is still dynamic, incredibly, though much battered, with Beirutshima the latest assault against it. Gloating over their likely handiwork, Jews rejoiced at that calamity. As with the Holocaust and 9/11, the truth will come out, because it canât be smothered forever by Jews with their meaningless charge of âanti-Semitism.â 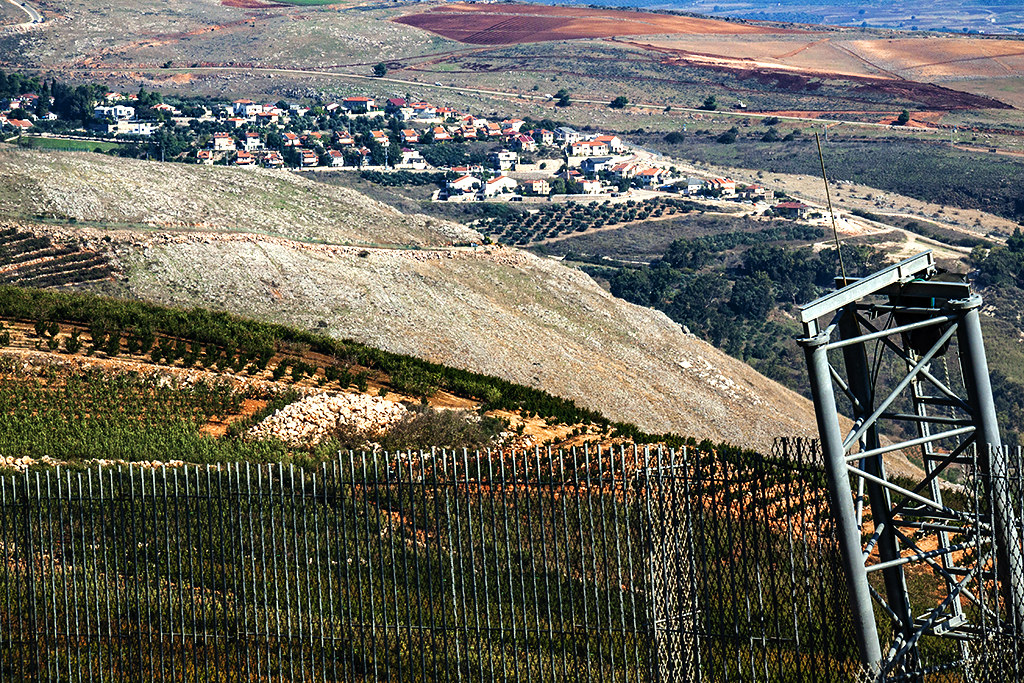 There is no buffer zone between Israel and Lebanon, just a concrete wall or, even more incredibly, a wire fence. From Lebanon, I can see Jewish farms, orchards and houses, but no soldiers, or even people, just a yellow tractor moving in the distance.

At these dicey settlements, the laborers tend to be dark Ethiopians and Yemenis, for Ashkenazim just arenât desperate enough, though they will be soon, God willing. With a second passport, many are already prepared to become your neighbors.

On the Lebanese side, houses, shops and cafes rush right up to the border. As Jews keep out of sight, Lebanese go on with life. 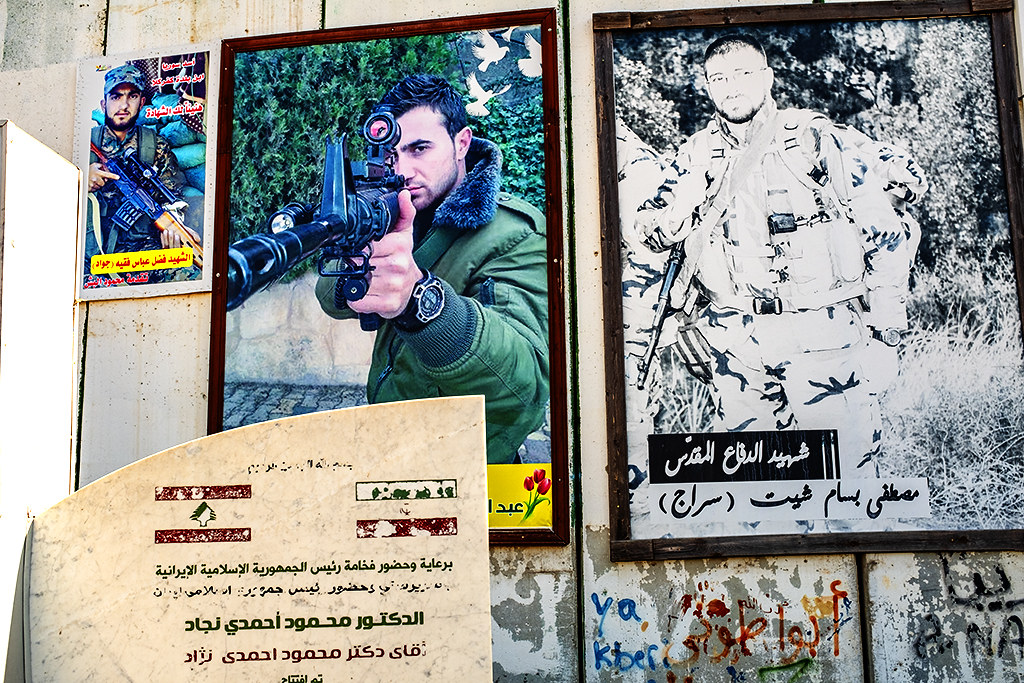 The border wall is filled with murals and graffiti, with several depictions of Jerusalemâs Dome of the Rock, and thereâs even a model of it at a traffic circle, next to the wall. A smoking tank painted by âSaraâ is accompanied by this taunt, âMerkava / Pride of Israel.â Thereâs a portrait of a saluting Hassan Nasrallah, the leader of Hezbollah. In southern Lebanon, this Shiite Party of God is the de facto government.

In Aadaysit Marjaayoun, thereâs a billboard showing the Iraqi Abu Mahdi al-Muhandis, the Iranian Qasem Soleimani and the Lebanese Imad Mughniyeh. The first two were assassinated by the USA, the last by Israel. The Jewish state is a stoneâs throw away.

Even standing on tiptoes, I canât see Jerusalem. Iâm heartbroken. I came to Lebanon primarily to board a cheap van from Sidon to Jerusalem, and inshallah, perhaps that can still happen, and not next year but by Christmas.

In 621, Mohammed was carried from Mecca to Jerusalem by a buraq, a winged animal thatâs smaller than a mule and larger than a donkey. As if that isnât cool enough, that same night

Mohammed also met Adam, Idris, Moses, Jesus, Abraham and Allah Himself, on different tiers of heaven. (God was on the 7th floor.)

Moshâs conduct is most fascinating. When Mohammed told Moses that Allah had commanded 50 daily prayers for Islam, the Jew boss urged the first Muslim to haggle it down to 25, then five, but even that was deemed too onerous, so go back and Jew Allah some more, Mosh urged. Mohammed couldnât do it, âNow I feel shy of asking my Lord again.â

In Brothers Karamazov, Dostoevsky mentions an Ivan Kramskoi painting, âThe Contemplator,â with its solitary figure standing in the cold, transfixed.

The master then riffs, âIf you nudged him, he would give a start and look at you as if he had just woken up, but without understanding anything. Itâs true that he would come to himself at once, and yet, if he were asked what he had been thinking about while standing there, he would most likely not remember, but would most likely keep hidden away in himself the impression he had been under while contemplating. These impressions are dear to him, and he is most likely storing them up imperceptibly and even without realizing itâwhy and what for, he does not know either; perhaps suddenly, having stored up his impressions over many years, he will drop everything and wander off to Jerusalem to save his soul, or perhaps he will suddenly burn down his native village, or perhaps he will do both.â

After trekking 2,000 miles, 13,000 Crusaders reached Jerusalem in 1099. After an eight-day siege, they entered it to slaughter roughly 40,000 Muslims, Jews and even Christians. Kill them all and so forth.

Among the invaders was Raymond dâAguilers, âBut now that our men had possession of the walls and towers, wonderful sights were to be seen. Some of our men (and this was more merciful) cut off the heads of their enemies; others shot them with arrows, so that they fell from the towers; others tortured them longer by casting them into the flames. Piles of heads, hands, and feet were to be seen in the streets of the city. It was necessary to pick oneâs way over the bodies of men and horses. But these were small matters compared to what happened at the Temple of Solomon, a place where religious services are ordinarily chanted. What happened there? If I tell the truth, it will exceed your powers of belief. So let it suffice to say this much, at least, that in the Temple and porch of Solomon, men rode in blood up to their knees and bridle reins. Indeed, it was a just and splendid judgment of God that this place should be filled with the blood of the unbelievers, since it had suffered so long from their blasphemies. The city was filled with corpses and blood.â

A year earlier in Maâarra, Syria, Crusaders gorged on human flesh, by their own admissions. Radulph of Caen, âOur troops boiled pagan adults whole in cooking pots; they impaled children on spits and devoured them grilled.â

The quest for Jerusalem, then, can fling open the gate of hell, but it doesnât have to. When Saladin conquered it in 1187, all he demanded of the vanquished was an exit fee, not unlike whatâs required at some shitty airports, still.

This forgiving arrangement clearly irritated many of his followers. Ibn al-Athir, âThe Patriarch of the Franks left with a large amount, which God alone could grasp, of the wealth of the churches, such as the [Dome of] the Rock, the Aqsa, the Holy Sepulchre and others. He himself had a comparable amount but Saladin did not trouble him. It was suggested to him that he should seize what he had to strength the Muslimsâ cause but he said, âI will not act treacherously towards him,â and all he took from him was ten dinars.â

The Mongolsâ surge into the Levant has been dubbed La Croisade Jaune, but joking aside, itâs truer to tag Crusaders as The White Horde, for terrorizing all, they looted, murdered and raped their way to the Holy Land. Going home, though, they brought enough knowledge, wisdom and techniques from the East to revive a dark and slumbering Europe, resulting, eventually, in the Renaissance. Not a bad deal.

Before entering the White House, Trump promised to build a border wall, bring outsourced jobs back, drain the fetid Beltway swamp and even prosecute Hillary Clinton. Unsurprisingly, at least to this observer, Trump has done none of that.

As expected, ordinary Americans are hung out to dry, again. More economically hamstrung than ever, theyâre also stoked daily, by the Jewish-controlled media, into screaming at, sucker punching or even shooting each other. Though American elections have been rigged for decades, the last one was transparently obscene, so as to trigger left, right and centrist Americans into a battle royale, as they sit back and watch, laughing. Blindfolded, you swing.

Subservient, the American President has only kept his promises to Jews. Iranâs economy is strangled and its top general murdered, the US embassy is in Jerusalem, illegal settlements are kosher and the Golan Heights belongs to Israel. Leaving, Trump has dispatched top officials to Israel to make sure thereâs a smooth transition to the next puppets, not that Jews are sweating over that.

Theyâre only losing sleep over my neighbors, the farmers, petty merchants and mechanics, etc., that make up Hezbollah.

Borrowing from Jews, Hezbollah fighters also wish each other, âNext year in Jerusalem!â Undoubtedly, this is also an acknowledgment, wink, wink, of Islamâs Abrahamic roots.

Itâs time for a reconciliation of the Semites, which means the latest white invaders must leave, just like the Crusaders.

Even more benevolent than Saladin, Hezbollah wonât even squeeze a dinar from them.