âTá» Quá»c TrÃªn Háº¿tâ [âNation Above Allâ] was a slogan of the defunct and much maligned Republic of South Vietnam, while the Socialist North rallied their populace with âChá»ng Má»¹ Cá»©u NÆ°á»câ [âFight the Americans, Save the Nationâ]. During the war, both Vietnamese sides stressed their nationalist credentials while discrediting their opponent as a foreign puppet. The common Vietnamese soldier, then, didnât fight and die for capitalism, communism, democracy, internationalism, universal brotherhood, America, Russia or China, but only for Vietnam, for only nationalism could justify so much sacrifice, pain and endurance. 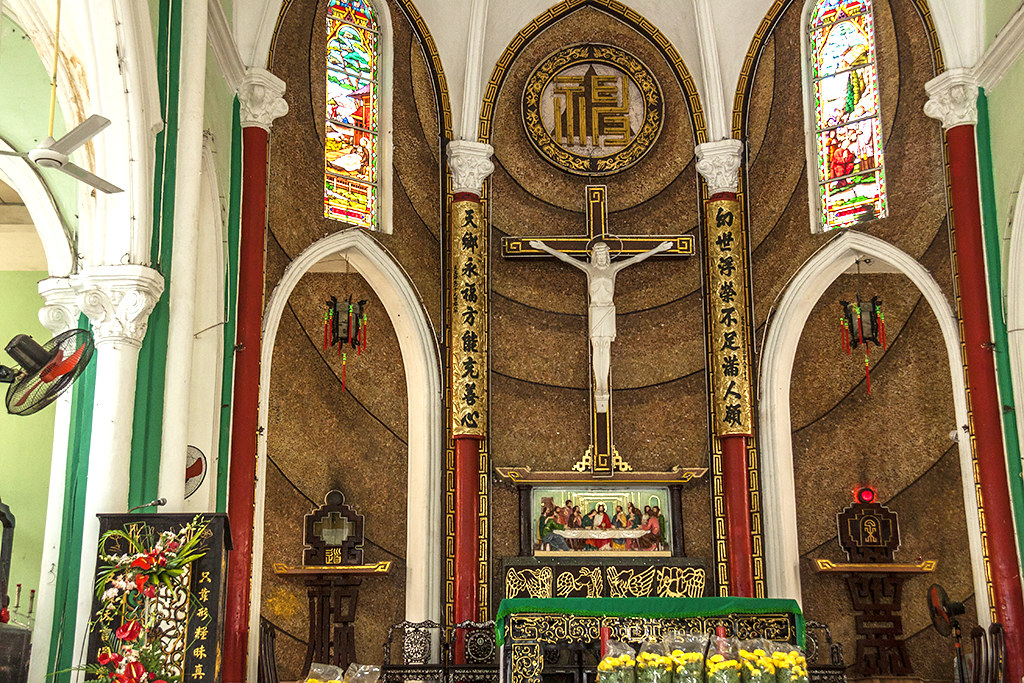 Two miles from me is St. Francis Xavier Church. In Vietnam, there are Catholic churches that combine Western and Eastern architectural elements, with PhÃ¡t Diá»m Cathedral, completed in 1891, the most striking example. Though St. Francis Xavier is quite modest in size, itâs very charming and elegant, with a Chinese pavilion in its courtyard sheltering the Virgin Mary. The red, buttony cross on its ornate gate is flanked by two white, upturned carps, while inside, the main crucifix, with an ivory-white Jesus, is framed by two contrapuntal couplets, in Chinese.

On November 2st, 1963, President Ngo Dinh Diem and his brother, Ngo Dinh Nhu, were captured at St. Francis Xavier Church, where they had fled to escape a coup. Tied up and dumped inside an armored personnel carrier, both were then shot.

Since the Americans had propped up Diem, it was they who had to give the go ahead to depose, if not kill, the man, and though Diem is often caricatured as just an American puppet, he was clearly not just that, for otherwise, there would have been no reason to wipe him out.

The very fact that he was killed by the American deep state means he wasnât serving it very faithfully. Likewise, John F. Kennedy was also assassinated three weeks later, and though that rub out is even murkier, to the point of farce, its lessons are also abundantly clear.

If youâre an American citizen, the state doesnât owe you any reasonable explanation, about anything, and if youâre a politician within the American orbit, itâs best that you toe the line and ask no inconvenient questions. Carter, Clinton, Bush father and son, Obama, Trump, Sanders, Hillary or whoever, they understand perfectly well the diagram of magic bullets dancing in a shattered skull, so none will let slip one heretical statement about the USS Liberty, say, or 9/11.

In Saigon in 2016, Obama visited Jade Emperor Pagoda. Built by the Chinese in 1909, itâs considered old by local standards, but Saigon is a pretty new city. Founded in 1698, itâs a decade younger than Philadelphia. Near me on Nguyen Trai Street, thereâs a handful of Chinese temples from the 19th century, and the other day, I found myself ogling at one, again, as I trudged by in the heat and dark. If this was any other East Asian city, however, these modest structures wouldnât even be mentioned in a guidebook.

Renamed Ho Chi Minh City after April 30th, 1975, this city is still universally called Saigon in daily conversations, as well as on countless shop signs, and not just here, but across the country. In Hanoi, for example, youâd find stores advertising âSaigon fashion,â and restaurants serving dishes in the âSaigon style.â Now as ever, a native son is still a ângÆ°á»i SÃ i GÃ²n.â Finally, you canât erase by a governmental decree a name thatâs immortalized by all those songs, novels, stories and poems.

Iâm bringing this up because a couple of righteous nitwits have chastised me for not knowing the name of my native city, with one John Lawrence RÃ© commenting, âCalling it Saigon is for revisionists still living in the illusion of american exceptionalismâ! Only an American exceptionalist revisionist with the deepest illusions about himself, country and history can barf up such a load of unintended irony. It is hopeless.

War against the Americans over, the Vietnamese communists promptly fought against communist Cambodia, then China, so there goes international communist solidarity, not that it ever existed, then the Soviet Union collapsed. With communism discredited for everyone but Western bourgeoisie posers, Vietnamese Communists have resorted to the old standby, nationalism, for their legitimacy. Nation above all. 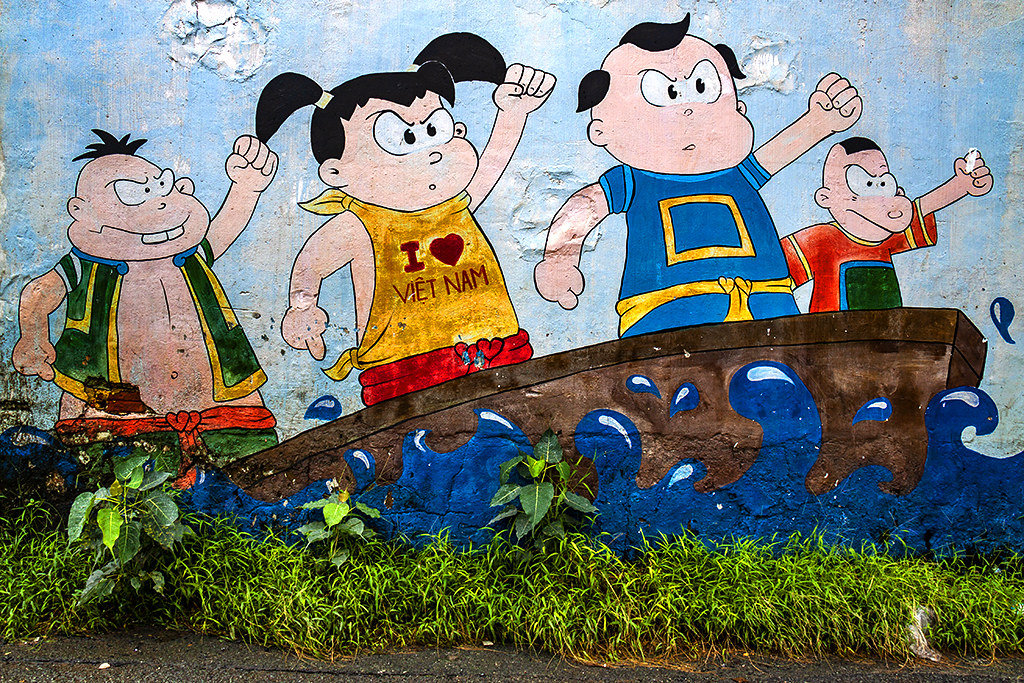 Across Vietnam, then, youâll find nationalist murals and posters exhorting the people to defend the nation, as in âPARACEL ISLANDS AND SPRATLY ISLANDS BELONG TO VIETNAM,â âWE CHILDREN LOOK TOWARD OUR NATION’S SEA AND ISLANDSâ and âFIRMLY PROTECT THE OWNERSHIP OF VIETNAMESE SEA AND ISLANDS,â etc. Thereâs even a kidsâ coloring book called âSea Islands My Nation,â with a boy sailor standing on a beach, holding an AK-47, with a lighthouse behind him.

In the West, nationalism has become a dirty word to the educated, progressive class, who routinely equate it with fascism. They also see national borders as somehow obsolete and oppressive, but whatâs ignored is that each man is profoundly defined and marked, with practically each of his word and action, by his national heritage. Having lived as an adult in five countries, and traveled to dozens more, I have never met anyone, no matter how cosmopolitan, who isnât essentially one nationality, with only a handful tolerably passing as a second. The nation, then, is the totality of who you are, and itâs where and how you are properly seen and understood.

The most common Vietnamese word for nation is actually âwater,â as in I was born in this water and I will defend my water to the death. What water are you from? Shaped by a unique history and language, every nation sees the world differently, so only the most naive or educated can even pretend weâre all the same. 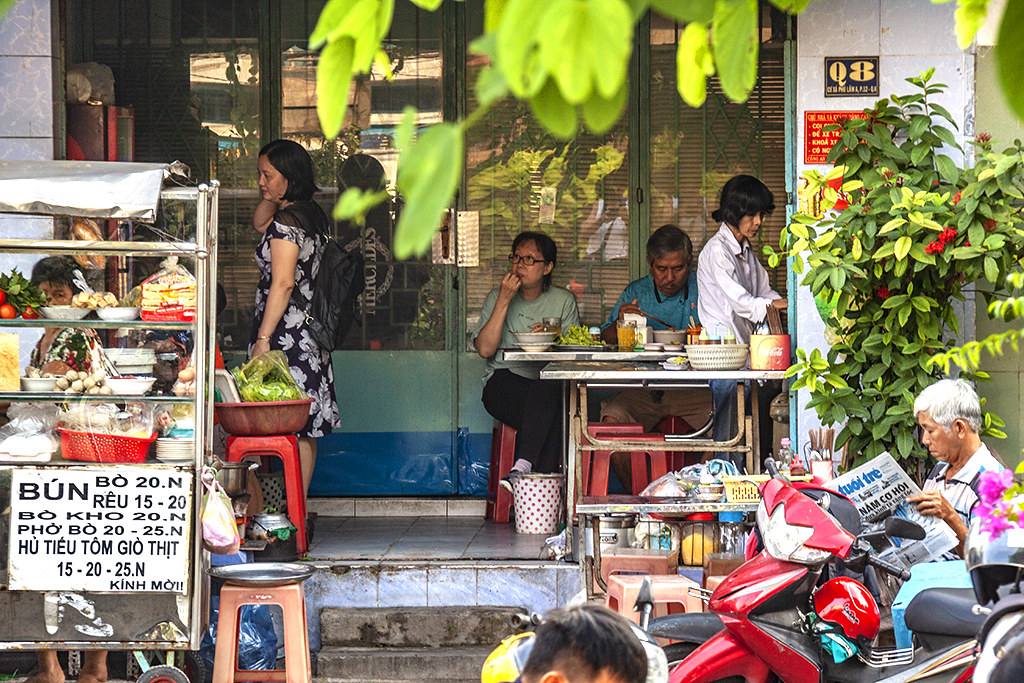 Philadelphiaâs Italian Market may be one of the funkiest American neighborhoods, but itâs still not Saigon, not that it should be. Each day, I become more reintegrated to my native city, so instead of bullshitting in Friendly Lounge, with the Phillies in the background, I found myself, like tonight, eating two duck balluts on a sidewalk, then wandering through clogged streets and darkened alleys to reach another eatery, where I had some pretty good beef, bÃ² lÃºc láº¯c, plus two Tiger beers, for just $4.27. As with most Vietnamese joints, there was no clear boundary between business and street, so intinerant food vendors approached my table, and the ownerâs kids ran all over, with the alley as their playground. Surrounding me were office and factory workers, eating, drinking and talking, with no canned noise to interrupt them. As always, the main pleasure was mingling.

Foreigners may sneer that the Vietnamese aesthetics seems to range from slovenly casualness to high kitsch, but judging by how your average Vietnamese is dressed, to the way he decorates his home or business, visual elegance or beauty is clearly not that important here. If you want that, fly to Japan. In Vietnam, a man is content if he has a plastic chair to sit on, with some tasty morsels in front of him, and people to converse with or simply see. So what if thereâs garbage under the table, and the wall heâs leaning on is dirty. Heâll chatter away, laugh.

At a park near me, a woman decided to open a noodle shop, so she set up a few tables not just in front of her house, but across the alley, in the park itself, and no one thinks anything of it, not even the cops who regularly lounge in the same park, but thatâs Vietnam for you. Borders are routinely smudged here.

Squatting on the ground, a pudding vendor chastised me for carrying my baby nephew wrong, âYouâre going to make him bow legged!â In an alley, a stranger blurted, âWhat a cute baby! Iâve been married for ten years but I canât conceive. You donât know how much I suffer, brother.â Instant familiarity is common here, and itâs built into the language, for everyone is your older or younger brother, older or younger sister, greater or lesser uncle, or greater or lesser aunt, etc.

Although all languages were designed to establish degrees of kinship, some stress these bonds more than others, and Americans prefer, simply, the egalitarian âyouâ and âI.â

A month ago, I hung out with a Vietnamese-American friend whoâs a professor at a California university. Though H. came to the US as a child, she never adopted an Anglo first name. Plus, H. speaks Vietnamese reasonably well, visits Vietnam often and has built her entire academic career on Vietnam. Despite all this, H. does not consider Vietnam to be her nation, âbecause this place is entirely owned by men,â an oversimplistic assertion, I thought, and told her so. Tellingly, H. also doesnât consider the US to be her country. In her mid 50âs, H. is divorced, so sheâs not only nationless, but without anyone to come home to. Living in Los Angeles, H. spends much time sitting in a car, staring at other peopleâs tail ends. Though she would protest, H. is entirely shaped by America, and is quintessentially, anomically American. If H. was more Vietnamese, she would know that her fate is bound up with her family, community and nation.

Peak Buffet for Ungrateful Insensates
Linh Dinh
• 70 Comments • Reply
← Sunstroked Observations from the OrientDisruptive Uncle Sam, Rising Eurasia an... →
Hide 118 CommentsLeave a Comment
"Nation Above All"
• 118 Comments
Commenters to Ignore
Commenters to ignore (one per line)