Shaman in Vinh Chau, 2019
◄►Bookmark◄❌►▲ ▼Toggle AllToC▲▼Add to LibraryRemove from Library • BShow CommentNext New CommentNext New ReplyRead More
ReplyAgree/Disagree/Etc. More... This Commenter This Thread Hide Thread Display All Comments
AgreeDisagreeThanksLOLTroll
These buttons register your public Agreement, Disagreement, Thanks, LOL, or Troll with the selected comment. They are ONLY available to recent, frequent commenters who have saved their Name+Email using the 'Remember My Information' checkbox, and may also ONLY be used three times during any eight hour period.
Email Comment Ignore Commenter Follow Commenter
Search Text Case Sensitive  Exact Words  Include Comments
List of Bookmarks

After three weeks in Saigon for Tet, Iâm back in Ea Kly. Itâs 5:33AM as I begin this, and Iâll type until 6:45, to begin my work day at the plastic recycling plant.

As usual, I sit at Mrs. Haâs cafe. Iâm her first customer. Unlike Saigon, itâs chilly here. Appearing suddenly from the shadow between my thighs, her white poodle demands attention. I pet him. She brings me my coffee and tea. Two long distance buses pause in the dark.

After Tet, most Vietnamese businesses reopen with a ceremonial food offering to the God of Prosperity [Ãng Tháº§n TÃ i] and God of the Soil [Ãng Äá»a], two Chinese deities, and the date has to be carefully chosen, to ensure success for the coming year. My brother in law is very superstitious. To reverse some business setbacks, he had a back tattoo etched with a sadistically long needle for half an hour by a renown monk in Thailand, and magical charms given to him by a Teochew shaman in Vinh Chau, 125 miles south of Saigon.

This shaman only sees people by special recommendations and charges no fees, though grateful supplicants will bring gifts. He can channel the Monkey King, it is said, but isnât that a fictional character? Yes, but the Monkey King is based on Chinese mythology, so those who worship him insist there is such a god, as real as any, and there are perhaps a thousand temples dedicated to the Monkey King across the Chinese universe, with most of them in Fuzhou. Communists couldnât stand this. Trying to eradicate traditional religions and cults, they destroyed countless temples, including those worshipping the Monkey King, but in China and Vietnam, all these folk beliefs have made a huge come back. 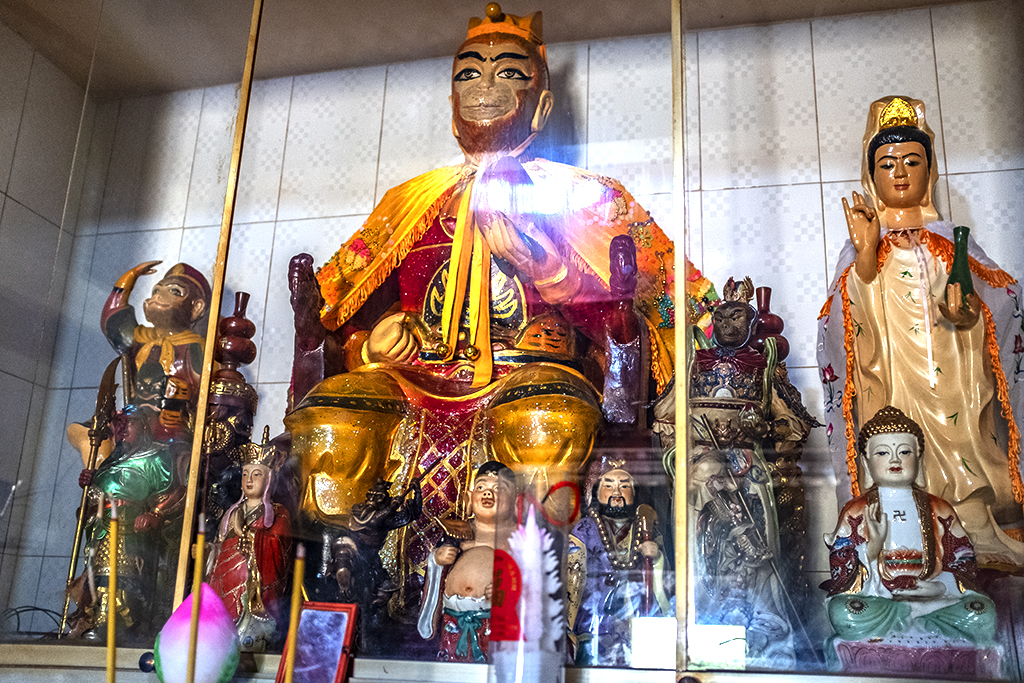 You must honor your ancestors. Predating Darwin by millennia, the Chinese have many legends tracing their roots to monkeys. There are tales of monkeys turning into a man or woman to have sex with humans, or become a Buddha. Magical monkeys abound, but the most badass is the Monkey King, for he can shape shift, walk on water or through the earth, stop rivers, grab the moon, transfer his pain onto your body, give you nightmares, divide himself to confuse enemies and grow another head if heâs decapitated.

Very few people go to Vinh Chau, but I made my first visit in 1998. My traveling companion was a 6 foot 9, red headed New York Jew, and Lloyd Luntz simply freaked out the backwoods locals. Kids ran up to pull the hair on his arms.

Being on the coast, Vinh Chau was the starting point for thousands of boat people, so many natives escaped. Prospering in the USA, Canada and Australia, theyâve sent lots of money back, transforming their hometown.

The shamanâs house is 50 yards from a road. I half expected to find some scowling, intimidating dude, but only found a half dozen middle aged men, sitting cross legged on a wooden bed, drinking tea. The sun there is fierce, so people tend to be darker, but one bare-chested, white bearded guy was particularly dark. Thatâs the shaman. 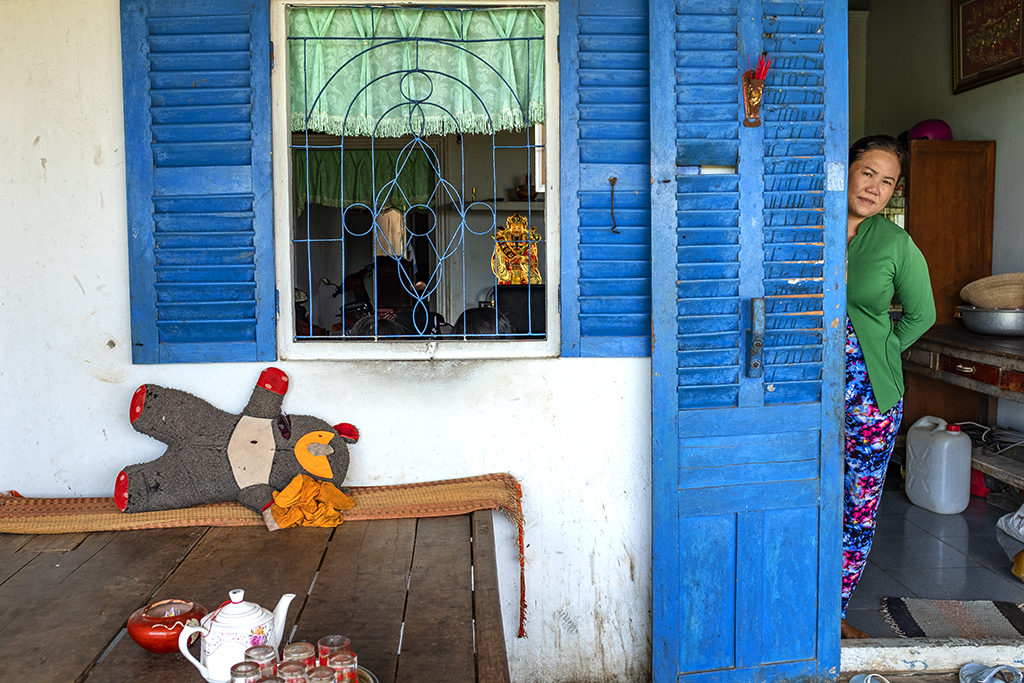 His concrete house was modest and rather ugly, his wife and kids were cheaply dressed and there was a shallow bamboo basket where six puny fish and three flayed frogs were being dried, probably to make rousong. At a nearby patch, rows of purple onions waited to be uprooted. In the distance, a spired Cambodian grave magnificently rose.

We entered a small yet elaborate shrine to the Monkey King, with murals on the walls illustrating episodes from Journey to the West.

Being seeing us, the shaman had to take care of a man who was made to sit on a chair of nails, as the still bare-chested holy man shouted abuses at him, with âfuck your motherâ a constant refrain. Enduring the ordeal, the distressed beneficiary was actually the Police Chief of Bac Lieu Province. In Vietnam, an official of that rank can expect to rake in lots of illicit loots, and make plenty of enemies, so somebody must have put a curse on him, hence this exorcism. âFuck your mother!â 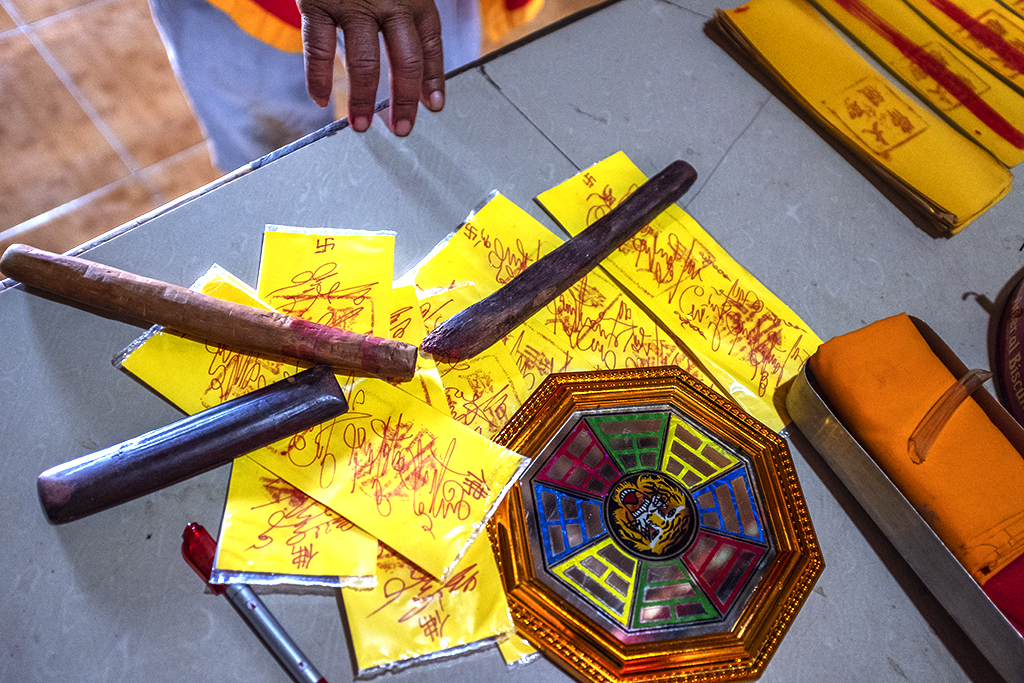 Performing his rituals, itâs standard for the shaman to pierce his cheeks with two long rods, without drawing blood. He knelt, prayed, waved a fan, spoke in Vietnamese and Teochew, wrote magical charms in red ink with a brush and answered questions about our futures, along this line, âYour break wonât come this year, but you must be patient. Donât lose heart.â If I can learn to puncture my cheeks painlessly, maybe I can become a shaman also, but just for thinking that, I will likely be disfigured, if not killed, this year, so should it happen, you can trace it to this blasphemous sentence. âFuck your mother!â Forgive me, Monkey King.

Each in our party of six left with magical charms, and the shaman also granted our plastic recycling plant strips of paper imbued with supernatural power, to be posted at strategic locations. Most importantly, we got our lucky reopening date.

9:34AM. After the last paragraph, weâve unloaded two truckloads of plastic garbage, and the work day is going reasonably smoothly. By reopening a bit later than expected, we lost a handful of workers, for they simply couldnât hang around without an income. Also, Mr. Cuc is hospitalized, thanks to decades of heavy drinking. Though our oldest worker at 58, he seriously hauled ass. Mrs. Vinh is also not likely to return, for she continues to suffer beatings by her husband. The laws canât prosecute since she wonât report these abuses. A few times, her male relatives have come over to rough up her husband in retaliation, but they canât keep doing that unless Mrs. Vinh wants them to. Black and blue, she stands by her man. In the US, too, I know women like this. 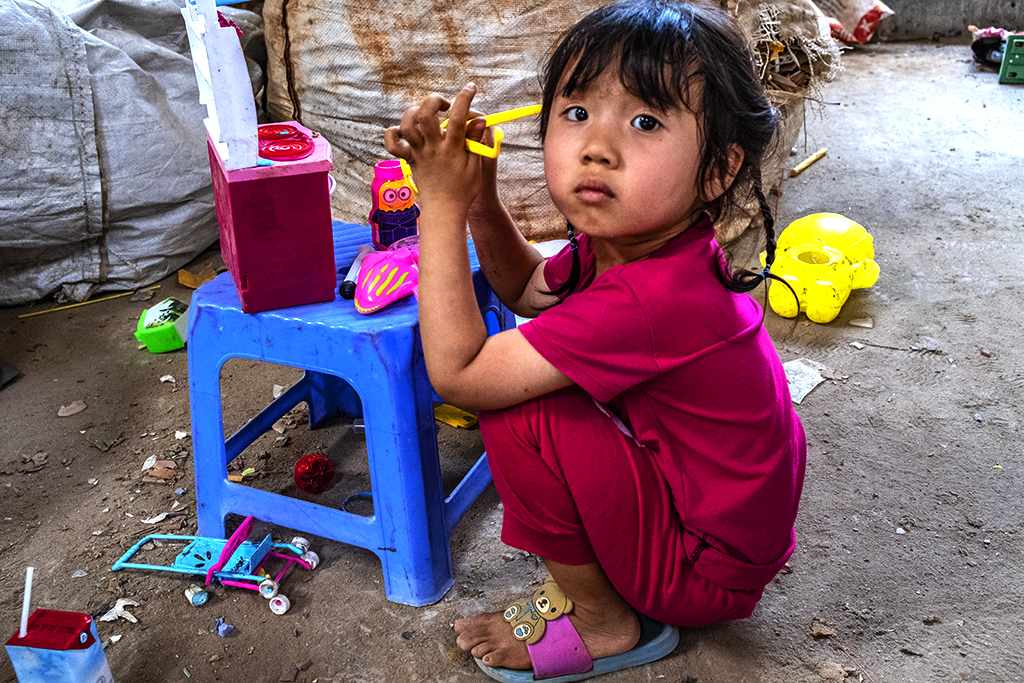 As I type, a small girl, nicknamed Rabbit, plays behind me, with plastic toys scavenged from the garbage. Both her parents work for us. Every so often, we get a kid inside our plant, and I try to humor them with cookies or candies. With heavy bags being moved about and bottles of insecticides among our recyclables, this environment is not exactly child friendly, but Rabbit is reasonably well behaved and rarely throws a tantrum. Next to broken dolls, a âHAPPYâ rooster, brightly colored combs and a matchbox sized shopping cart, she fusses with a tiny oven. âMake me some food,â I tell her. âIâm hungry!â

Rabbit looks up, âWhat will you have, uncle Linh?â

Sheâs wearing a red muscle T with a tiara-crowned blonde mermaid holding a seahorse, and, âFriends love wheres YOU find them.â Even if the English was good, no one here could decipher it anyway. Itâs just cool to be adorned with the language of that most magical place, America, where everything, as projected, is beyond real, and the further you are from it, the more fantastic it becomes.

On the way back to Ea Kly, we passed a town, Kiáº¿n Äá»©c, that seemed oddly desolate, with many restaurants empty or out of business.

âThey must have suffered a bad season,â my brother in law concluded.

âWhat do they grow here?â I asked.

Since âtiÃªu Äiá»uâ in Vietnamese is also âdesolation,â I joked, âThatâs what they get for growing desolation. They should switch to growing apricots [mai] and making fermented fish [máº¯m].â

Mai máº¯m, you see, sounds a bit like âmay máº¯n,â or âlucky.â Vietnamese think like that. Since mai alone also means lucky, most Vietnamese overspend during Tet to buy at least one apricot tree in blossom, to ensure good luck for the rest of the year. Itâs an absurd belief, but thatâs culture for you.

The Vietnamese susceptibility to magic is more than counterbalanced by a clear headed practicality and common sense, for otherwise, they wouldnât be able to survive or even thrive. Take my brother in law. Though prone to mumbo jumbo, the 43-year-old has risen from nothing to become a millionaire, with his main business the making of plastic crates that are exported to Thailand. Two years ago, he traveled to India to explore the possibilities of exporting organic Vietnamese fruits and vegetables.

There is much that is irrational or fantastical in every society, with some beliefs imposed from above, sometimes abruptly, even violently. The worst beliefs arenât just costly, but suicidal, but you canât see whatâs killing you if youâre mesmerized.

Marx is a false god, conclude most Vietnamese, so now you can drive hundreds of miles here without encountering his bearded face once, but everywhere, temples and churches are being built, and statues of Guanyin, Jesus and the Virgin Mary front millions of homes. Vietnamese breathe easier because the state no longer micro manages their lives or, worse, try to control their every thought. Surely, thatâs the worst evil.

← Heart of Darkness GermanyIâm Your Next President →
Current Commenter
says:
Current Date at Time Now
Leave a Reply - Commenters who are not discussing the article, but are only indulging in ad hominem attacks, will not be tolerated.
Cancel Reply
Commenting Disabled While in Translation Mode