Vietnamese church in Chanthaburi, Thailand, 2018
◄►Bookmark◄❌►▲ ▼Toggle AllToC▲▼Add to LibraryRemove from Library • BShow CommentNext New CommentNext New ReplyRead More
ReplyAgree/Disagree/Etc. More... This Commenter This Thread Hide Thread Display All Comments
AgreeDisagreeThanksLOLTroll
These buttons register your public Agreement, Disagreement, Thanks, LOL, or Troll with the selected comment. They are ONLY available to recent, frequent commenters who have saved their Name+Email using the 'Remember My Information' checkbox, and may also ONLY be used three times during any eight hour period.
Email Comment Ignore Commenter Follow Commenter
Search Text Case Sensitive  Exact Words  Include Comments
List of Bookmarks

In 1987, V.S. Naipaul was asked by Andrew Robinson, âHave the immigrants from Asia and the Caribbean changed British life?â

Naipaul, âI feel that there will be a lot of difficulty. I donât see how it can be avoided, especially with these immigrants who are not seeking a new identity or a new kind of citizenship. They are migrating to allow their barbarism to flower, so they can be more Islamic or more Sikhish than they can be in the comparative economic stagnation of their home societies. I think it is very dangerous.â

Of the US, Naipaul stated, âAmericans are really very nice, very humane people. What a humane civilization and culture to have been created from a big melting pot.â As for living there, Naipaul said, âI have no plans, but it would be nice to be in a place where nearly everyone you meet is a stranger.â

Did Naipaul contradict himself? If having a culture where everyone is a stranger is very nice and humane, then why shouldnât England, or anywhere else, become a âbig melting pot,â American style? The caveat, perhaps, is that the immigrant must seek a new identity, must transform or deform himself, so as to shed his âbarbarism,â but with multiculturalism replacing the melting pot as an ideal, assimilation, no matter how imperfect, is no longer required, so is the new, barely-tossed salad, where every ingredient is distinct, even more humane and nice?

Born in an Indian-dominated melting pot, Trinidad, Naipaul went to university in England, which has become his home in every sense, but this hasnât prevented him from having extended stays in numerous places, including a year in India. Born uprooted, Naipaul has chosen to spend much of his life as an outsider, so itâs within this context that one must view his suggestion that an ideal society is one where everybody is similarly estranged.

When asked what aspects of himself he felt was specifically Indian, Naipaul answered, âThe philosophical aspectâHindu I would say. Speculative and probably also pessimistic. What I mean by pessimism is not things turning out badly, but a pessimistic view about existence; that men just end. It is the feeling that life is an illusion. Iâve entered it more and more as Iâve got older.â

So despite his cosmopolitan aura and English manners, Naipaul remains Indian on the deepest level, for all of his experiences and learnings rest on a Hindu foundation, and this, too, informs and dyes all of his emotions.

So what, you may say, for the accommodation of diverse groups is already required of all societies, for none is truly monolithic, but between diversity and homogeneity, what should any society aim for? In traditionally white countries, diversity is the new religion, opposed only by racist louts, so go the white media, while in all the yellow, brown and black countries, ethnocentrism still rules. So whoâs on the right path, the âprogressiveâ West or more traditional, âreactionaryâ societies?

Recently, I visited Chanthaburi, a Thai province with many Chinese, Vietnamese and Cambodians. The first 100 Vietnamese arrived in 1709, as Catholics fleeing persecution. Now, there are more than 8,000 people in Chanthaburi (pop. 550,000) who identify as Vietnamese. Almost none can speak the language, however, and many are also of mixed blood. Religion is the primary glue that holds this community together, and their present church, built 109 years ago, is the largest in all of Thailand. 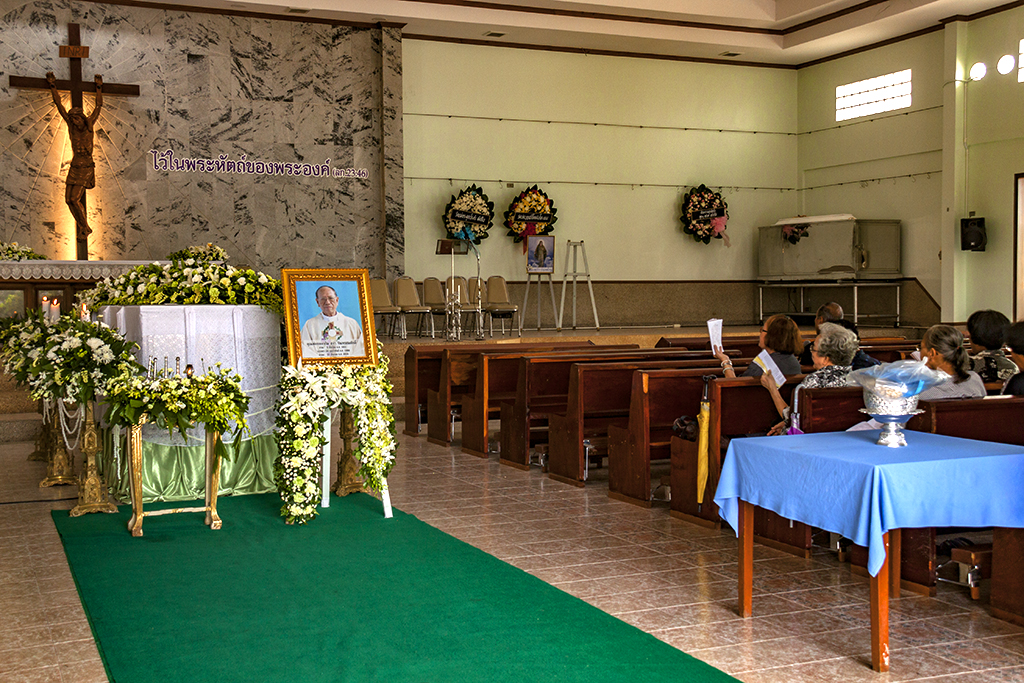 Standing outside a chapel, I saw a flower-bedecked coffin with a framed portrait of a priest, and two dozen people, mostly old, praying. Immediately, I could tell that it wasnât Thai, but then it wasnât Vietnamese either. Every so often, however, I would catch a word or phrase that was somewhat Vietnamese. When they were done, I spoke in Vietnamese to the folks walking out, but the first three couldnât answer me, then a man approached with tentative English, âCan I help you?â

It turned out they were all Vietnamese, praying in Vietnamese, and to prove it, the 55-ish man showed me his Vietnamese prayer booklet. With his tones all mangled, he proudly read me a sample sentence. In strained English, he then stated, âI want to learn Vietnamese. My father, mother, Vietnamese.â Then, âMy tá», uh, tá»â¦â

Until World War II, Vietnamese was still taught in the community, he said, but now, thereâs only one old guy at the market who could speak it fluently.

âHave you been to Vietnam?â I asked.

âDo you feel Thai or Vietnamese?â

After a slight hesitation, âBoth.â

Fair enough. If there was a shooting war, however, which way would his rifle be pointed? 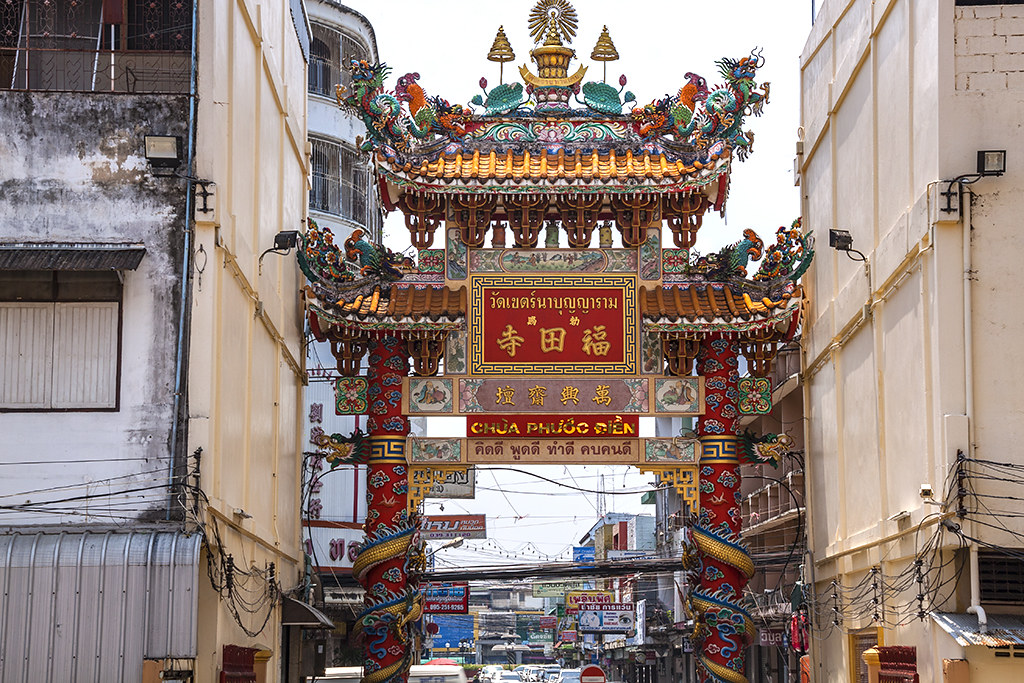 In Chanthaburi, I saw several Buddhist temples and shrines that were clearly Chinese, so religion is intertwined with ethnicity to preserve a separate identity for each subgroup. A most fascinating example of this are the Jews of Kaifeng, China. There at least a thousand years, they are indistinguishable from other Chinese, yet still consider themselves very much Jewish. Some have emigrated to Israel.

At the other end of Thailand, there are 64 Chinese villages, populated by descendants of Kuomintang soldiers. Thailand let them in to be a buffer against the Chinese, then Thai Communists, and all have been granted citizenship. In a 2015 New York Times article, a 47-year-old man is quoted, âI may have a Thai ID, but Iâm Chinese. My family is Chinese, and no matter where we go, weâre still Chinese.â

After seven decades, these âThaisâ are still attached to China, unsurprisingly, although itâs still ruled by the same Party that tried its best to kill off their forebears.

Since blood is thicker than paperwork, its corruption is one way to dilute a competing allegiance. My Chanthaburi friend, Mala, is half Chinese, half Vietnamese, speaks only Thai, considers herself 100% Thai and is married to a Thai man.

Ethnic and race mixing, though, can only go so far, and even if universally applied, will only create new shades, each with its attractions and repulsions, not to mention a lingo thatâs inhospitable to outsiders. With each group defining itself against all others, conflicts will continue to erupt, as they always have.

Just as a man who claims to love all women, loves no woman, no one is remotely capable of giving a damn about everybody, no matter how much he may go on, often with righteous, vindictive rage, about universal brotherhood. With self-love as his compass, he will jab, kick and snipe at all those who differ even the slightest from himself, as testified by the comment stream following this very article.

With population and sense of entitlement constantly rising, against resources rapidly depleting, a state of constant war, nearly everywhere, is the best we can hope for, and in such a situation, a fragmented society will have no chance. Clannishness â the Series: How It Happened
JayMan
• 107 Comments • Reply
← National Identity, Great Thais and Eyes...War, Wedding and Wine in Nghe An →
Hide 26 CommentsLeave a Comment
"Melting Pots, New Identities and Flowering Barbarism"
• 26 Comments
Commenters to Ignore
Commenters to ignore (one per line)

← National Identity, Great Thais and Eyes...War, Wedding and Wine in Nghe An →
Current Commenter
says:
Current Date at Time Now
Leave a Reply - Comments on articles more than two weeks old will be judged much more strictly on quality and tone
Cancel Reply
Commenting Disabled While in Translation Mode