Phnom Penh, 2018
◄►Bookmark◄❌►▲ ▼Toggle AllToC▲▼Add to LibraryRemove from Library • BShow CommentNext New CommentNext New ReplyRead More
ReplyAgree/Disagree/Etc. More... This Commenter This Thread Hide Thread Display All Comments
AgreeDisagreeThanksLOLTroll
These buttons register your public Agreement, Disagreement, Thanks, LOL, or Troll with the selected comment. They are ONLY available to recent, frequent commenters who have saved their Name+Email using the 'Remember My Information' checkbox, and may also ONLY be used three times during any eight hour period.
Ignore Commenter Follow Commenter
Search Text Case Sensitive  Exact Words  Include Comments
List of Bookmarks

Cambodia makes good, cheap beer, so I was sitting in some lunch place with yet another can of Angkor, after having polished off a plate of fatty pork with rice. Two tables away, a girl sat, doing her homework. She had a machine that sang out, âOld McDonald had a farm, E-I-E-I-O!â and so on. Suddenly, it switched to, âand girlsâ¦ just want to have fun!â Itâs all good, for it was all in English, and this girl needed a constant fix of the worldâs master language, if she wanted to get ahead, that is, but what if English should wane as the lingua franca during her lifetime? It wonât matter much, as long as she can make a few bucks from her English skills.

Her ancestors built the greatest city in the world, Angkor, under a king, Jayavarman II, who declared himself âThe Universal Monarch.â Now, the Cambodians are sneered at by even the Vietnamese, who never managed to build anything distinctive in wood, much less stone, but thatâs history for you, for over time, all elephants will become dogs, to riff on a Vietnamese proverb.

Seven centuries from now, which American ruins will attract tourists? Maybe none. There will be a plaque, âHere existed the worldâs most inveterate generator of illusions,â and in smaller type, âBig or small screen, soft or hard core, real or implant, they sure kicked ass! For a century, they mesmerized the world with Marilyn Monroe, Micky Mouse, Sylvester Stalone, Madonna and Black Panther, the last undoubtedly their most iconic contribution to Western civilization.â

Phnom Penh is even more ovenlike than Saigon, so during my many long treks, with my shirt soaked in sweat, I would stop at a coffee stand for one or two iced latte or lemon tea. Often, the menu would also be in English, even in neighborhoods that saw almost no foreigners, and though most baristas couldnât speak English, they could readily understand âespresso,â âcappuccinoâ or âhot chocolate,â etc.

Perched on a stool, I was asked by the guy next to me, âAre you from Siem Reap?â

âFrom Siem Reap?! No, I came from Saigon.â Iâm sure he meant, Had I visited Angkor Wat, near Siem Reap. Dark, with short hair, wearing chinos and a golf shirt, he was in his late 20âs.

âSaigon!â With so few words, one must exclaim. Across the street, four monks in saffron robes walked under yellow umbrellas, with a canopy behind them advertising Coca Cola.

âYes, Iâm Vietnamese, but I spent many years in the US.â To make myself easily understood, I detached each syllable, I noticed, so my speech became staccato. I was exclaiming, too. Unwittingly, I was ruining both my English and his.

Exhausted from the linguistic exertion, he returned to his tablet and ignored me for the several minutes, then, âDo you like soccer?â He pointed to a replay from the last World Cup.

âYes.â I peered at the running figures. âThatâs Brazil and Germany, no?â Spontaneously, I had suppressed âversus,â for I thought he would not know it.

Putting his tablet away, he turned to some thin book and started to mark it.

Noticing the roman script, I asked, âAre you studying English?â

âYes,â and he brought his text closer. It was a Spanish guide to Angkor Wat, marked all over by a blue pen, red pen and yellow marker, with notations in both English and Khmer. 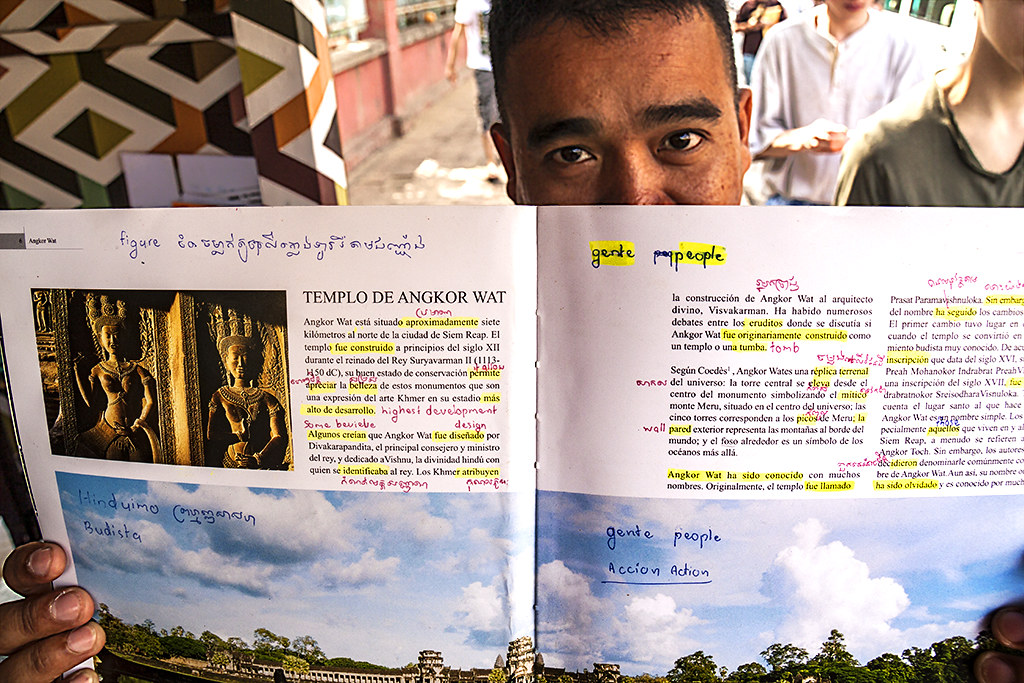 âI want to be tour guide,â he explained.

âNo Spanish class in all of Phnom Penh?!â

âNo way. There must be! So how do you study?â

âDo you have anyone to talk to?â

As for the Spanish-speaking tourists, he hadnât been able to befriend any, not that they would likely want to waste their precious vacation time chatting with a Spanish language beginner.

On my first evening in Phnom Penh, I met a woman from Valencia. Planning on a quick Cambodia visit, she had to stay on because a man on a motorbike had snatched her backpack, which contained her passport, but thatâs what she got for leaving it in the front basket of her rented bike. Muy estÃºpido. Julia was anxious to move on to Thailand, then Vietnam.

Thinking about my new friendâs predicament, I said, âYou know, there are two Mexican restaurants, right around here. Thereâs one in that alley,â I pointed, âand one down the street. Itâs called Cocina! Cartel! I donât know if they are Spanish speakers, but you should go and find out.â It canât be more desperate than reaching out to an embassy.

Hearing him read a few passages, it was clear his pronunciation was a mess, so his boldness and persistence may yield no cash, for thereâs no reason why anyone should hire this man instead of just buying a guide book, I thought. Plus, a tour guide must be able to answer questions.

One more, âKay is the best! What a renaissance man Kay is. He speaks English, Spanish and his native Cambodia as well of bits and pieces of Portuguese, Russian and French.â 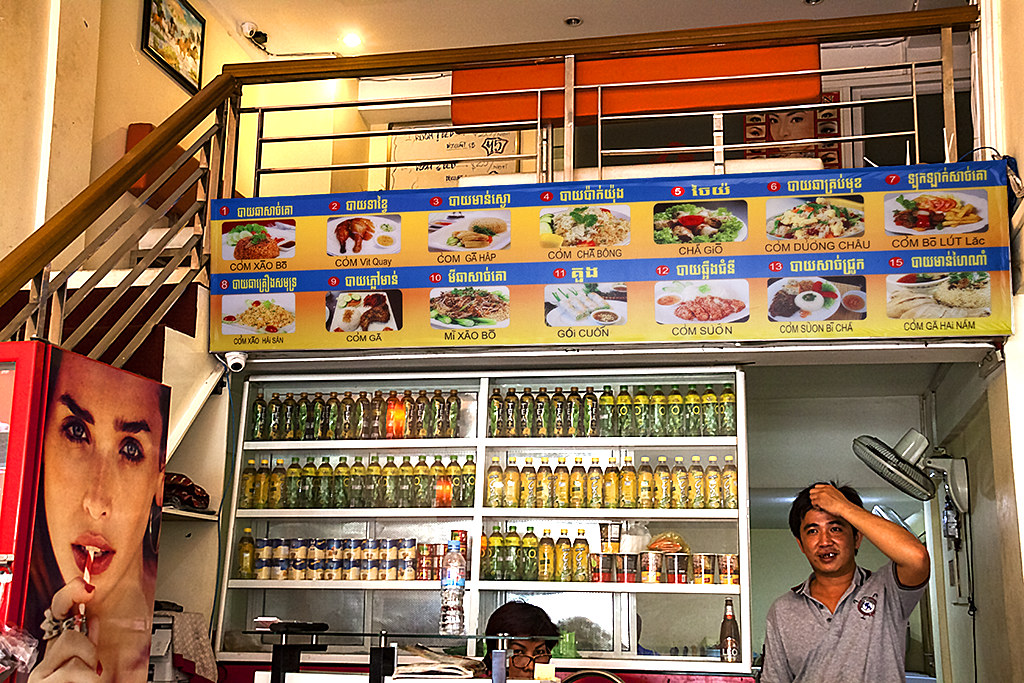 One afternoon, I met a 48-year-old restaurant manager with the same aptitude. Born in Phnom Penh, she escaped to Thailand, with her family, at age five, then at age eight, emigrated to Singapore and stayed for 21 years. There, she studied Vietnamese for three months, âIt was so easy. Vietnamese is like French, but with all the accent marks,â which is patently nonsense, but still, she spoke Vietnamese to me just like a native.

âYes, I can also speak English, French, Russian and Japanese,â on top of Cambodian, Mandarin and Vietnamese.

âI have the gift,â she smiled. âAnd now, Iâm studying Thai. When I was in Thailand as a child, I didnât like Thai people, but now, I love them! I go to Thailand all the time.â

I have a friend, Niccolo Brachelente, whom I confirm can comfortably speak and write English, Spanish, French and Japanese, on top of his native Italian. Two years ago, Niccolo asked me to proof his resume so he could apply for a job in Taipei, so maybe he had picked up some Mandarin also. Oh, and he knows basic German.

One night, I ate at Pyongyang, a North Korean restaurant. There are 130 of these, but most are in China, with none outside Asia. The attraction is not the food, but the performing waitresses. They play instruments, sing and dance. The drummer was trying to channel Neil Peart, Iâm sure. Drawing the loudest applause of the night, a beauty balanced a heavy jar on her head and spun around, I donât know, thirty times? Wowed diners handed her seven plastic bouquets, available from the house for a fee. For one number, they actually sang âYou Raise Me Up,â so even Kim Jong-un, one of Americaâs favorite villains, is instructing his women to sing in English. Depending on who came in, a waitress would speak in Cambodian, Chinese, English or, of course, Korean.

The point here is not that Cambodians, or anyone else, are linguistic geniuses, but as soon as you step outside the US, youâll find many people who are quite eager to learn at least one foreign language, English, with some capable of acquiring one, two or three more, even in countries with embarrassingly low IQ. Even when they fail, the effort alone sharpens their minds and widens their orientation.

Since Americans already know English, so to speak, most donât feel the need to bother with any language. Just hanging out and texting, theyâve mastered valley girl, Ebonics, death metal, double-wide or snark in ALL CAPS. Why think outside the continent-sized box when youâre already inside the belly of the beast?

In 2015, the Atlantic pointed out, âLess than 1 percent of American adults today are proficient in a foreign language that they studied in a U.S. classroom,â and 95% of the languages they do learn are European. Learning how someone speaks, one begins to understand how he sees and thinks, and the difficulties this entails also encourage humility. ← Rolling Into CambodiaCambodiaâs Illegal Immigrants →
Current Commenter
says:
Current Date at Time Now
Leave a Reply - Commenters who are not discussing the article, but are only indulging in ad hominem attacks, will not be tolerated.
Cancel Reply
Commenting Disabled While in Translation Mode