Coming to Cape Town, I was a bit concerned I wouldnât be able to walk around much. A Captonian had warned me I would be taking my life into my own hands, although he prayed to God he was wrong.

You canât experience any place without walking around, however, for itâs the only way to see, sniff and feel it, at a human pace, without barriers. A borderless body among others, you must be continually exposed to the landscape.

If I could meander through Gary, Jackson and Camden, the last countless times, surely I can duck, weave and bob my way through Cape Town?

Soon enough, I found out this was no war zone. As one born into a war, I should be able to recognize soldier thickened streets, weary MPs, dismal amputees, abject refugees, child beggars, sad, garish whores, sullen tanks, screaming jets, thump-thump-thumping helicopters at any time, artillery thuds, blindfolded captives on trucks, sandbags and barbed wires. 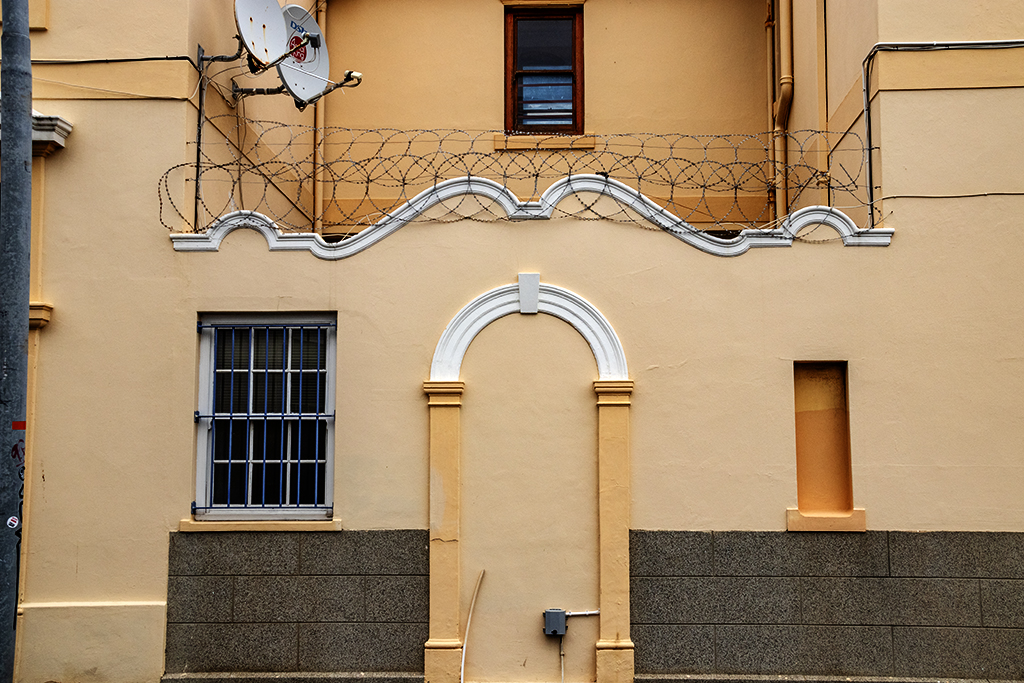 Granted, Iâve seen more razor wires in Cape Town than anywhere else. They top walls, wrap around pipes and entangle tree trunks. Still, Cape Town is far from a city at war.

An Angry White Pussy on Twitter, âSouth Africa is great; the trope that black men just want to rape white females is just a myth; you guys are just racist. Oh, fuck off Linh Dinh.â To characterize Cape Town as heavenly and hellish is hardly to call South Africa, a vast country nearly twice the size of Texas, great, and since Iâve said nothing about black men raping white women, why is he conjuring up black penises? It must be terrible to be haunted by such a trope! 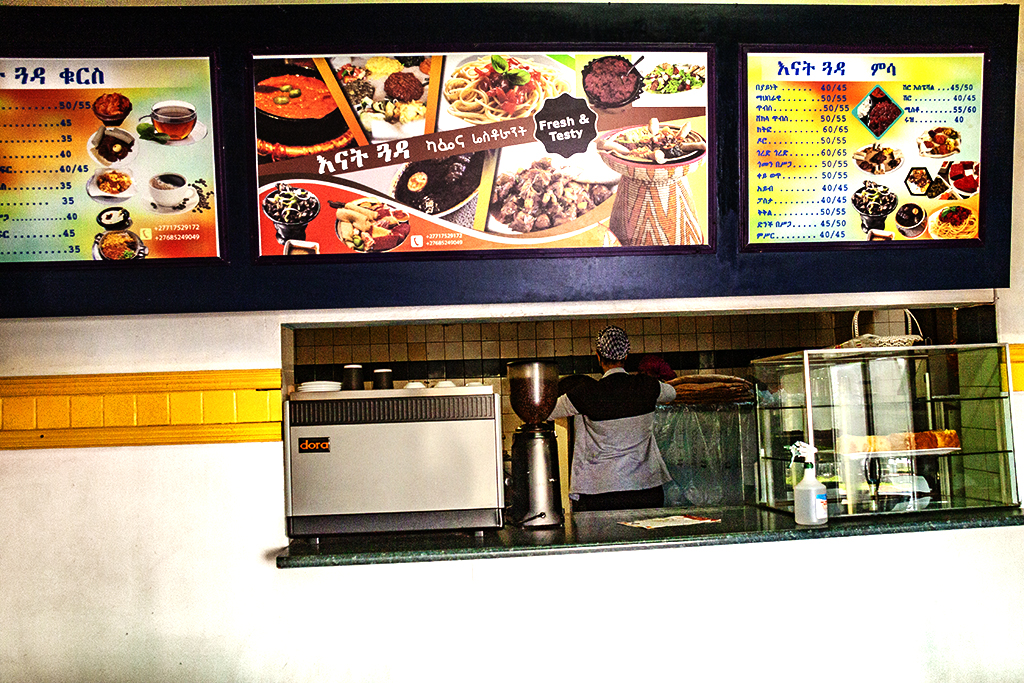 One day, I walked five miles down Voortrekker Road, from Belleville to Goodwood. On another trip up that way, I had had a fantastic Ethiopian meal at Out of Africa, so this time, I was looking forward to another pleasant surprise.

(Out of Africa didnât even have a menu in English, or Afrikaans, for that matter, so I told the lady to just give me whatever. Such a lovely crew, those four smiling women. When I started to sweat from my foodâs spiciness, one brought me a whole roll of paper towel. Dropping in for lunch, a man just sat at my table. Spongy bread united us.)

Fleeing English rule, Boers trekked inland. Boer in Dutch means peasant or farmer. Peasant has a condescending connotation which farmer doesnât, so you have, for example, Vietnamese peasants, but American farmers. Since the English boorish is derived from boer, you can deduce what the Brits thought of these farmers of mostly Dutch heritage.

During the Boer War, 26,000 Boer women and children died, from diseases or starvation, in British concentration camps. Brits, though, saw themselves as morally superior for they had stopped Boers from owning African or Asian slaves, the latter brought from the Malay Archipelago. 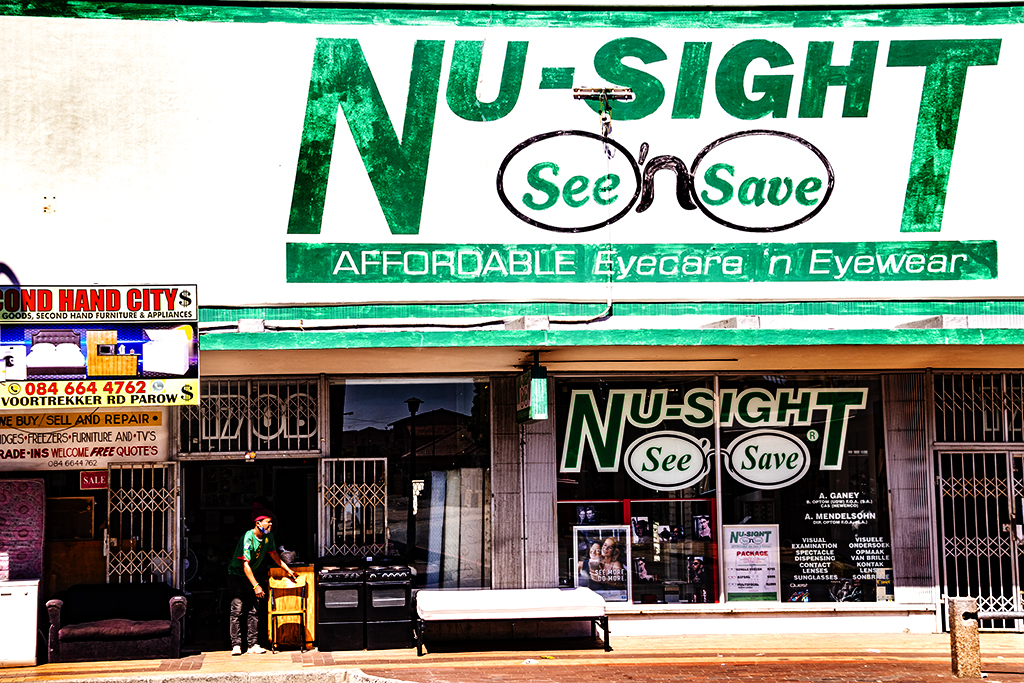 On Voortrekker, there are squarish stores with broad frontages flaunting huge letters, a frontier look not unusual in hypothetically urban Cape Town. There are churches offering prophetic healings, deliverances, empowerment services or, simply, miracles, with these not dispensed by no effete, dress-wearing priests, but robust, bombastic bishops, apostles, prophets and prophetesses, all but the last overly equipped with stallion-sized tropes to terrify the pale hearted.

Passing a neon-lit eatery with an A-frame sign outside, a pool table in the middle and a small window to the kitchen at the back, I almost walked in. Finally, though, I ran into one that was goofily perfect, Chelsea Malewa in Goodwood. I vaguely associated its name with the London squad, now atop the Premiership, and I also liked the huge thumbs-up painted on its wall. Starving, I strolled in. 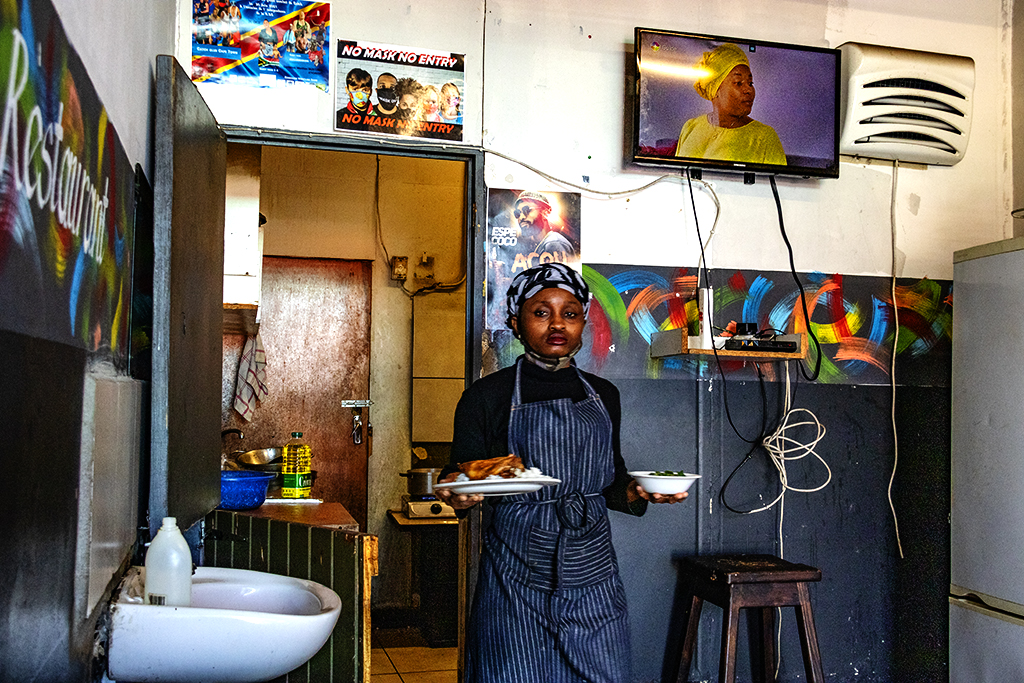 The smell that greeted me, however, was that of fish, both fried and raw, and wet garbage or a clogged sink of dirty dishes. Most sane people would have run out, but I didnât want to offend its owner/cook, a slim, unsmiling copper-colored woman with dark rimmed eyes, in a black and indigo headscarf, black blouse and indigo apron. Seeing such careful color coordination, I was hoping her food would also be well-tuned. Sucking it up, I ordered rice with chicken and spinach, but nothing to drink, for this place was so lame, it didnât have any.

It was truly brutal, bra. Iâd rather starve for three days than go through that again. My spinach was cold, my rice lukewarm and my chicken preposterously tough, with everything absolutely flavorless. It was like eating leftover that had been sitting on the counter for two or three days. For this privilege, possibly the worst meal Iâve ever had, I paid $3.51.

Again, to not offend the strangely grim woman, I gave the appearance of eating voraciously, though all I was trying to do was finishing my meal as quickly as possible, so I could get the hell out of there.

Free at last, I thought of that old joke about a guy who walks into a bar and orders one shot after another, all different kinds. After his 10th, the bartender says, âTake it easy, buddy. What’s the occasion?â

âThanks, but itâs impossible to get that taste out of my mouth.â

Although my experience at Chelsea Malewa was lamentable, it certainly added to my understanding of Cape Town. Like its wealth gap or neighborhoods, there is a vast range here, as wide as anywhere.

Visiting a city, many people try to dine at its best restaurants, but this leads to a rather false impression, for most locals donât go to those places. Ninety nine percent of Philadelphians, for example, have never been inside Le Bec Fin, its most celebrated restaurant, and most have never even eaten at Patâs or Genoâs.

They get their cheesesteak in their neighborhood, maybe from a Chinese, Korean or Puerto Rican guy even. 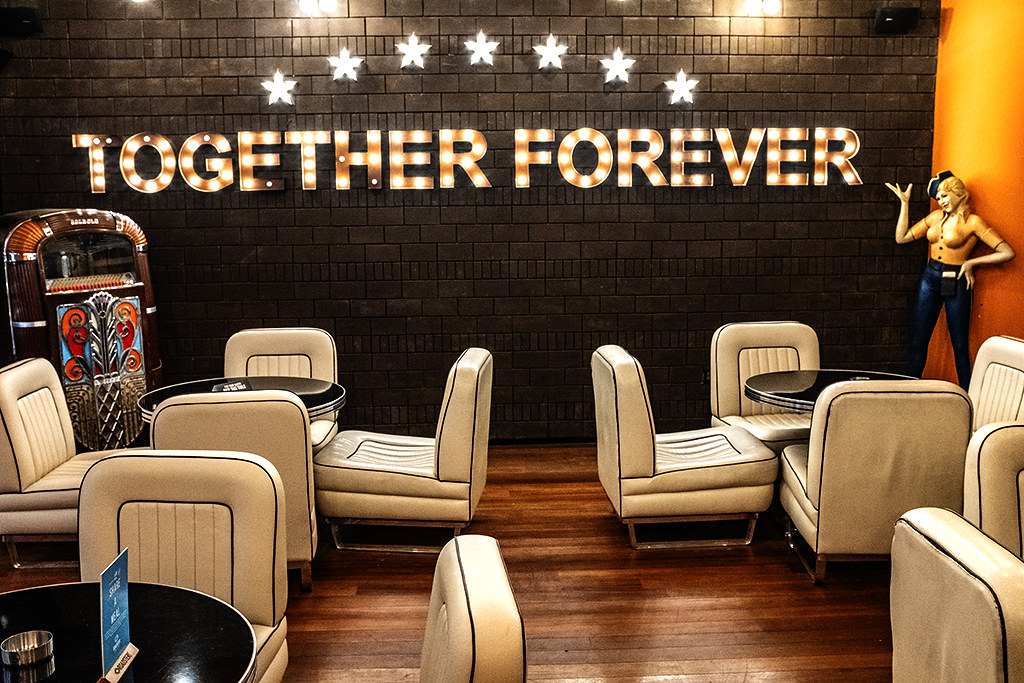 In Phnom Penh, I sampled a burger with fries from a Cambodian chain. In Cairo, I ordered Egyptian pizza. In Beirut, I enjoyed the best cheesesteak at Roadster Diner, for its bread, steak and cheese were superior to anything I ever tasted in Philly. In ReykjavÃ­k, I survived mostly on its fantastic hot dogs, for they were about the only food I could afford. I also tried its fermented shark. Rancid and with the texture of hard rubber, hÃ¡karl instantly reduced me to the lowest level of being possible. Paralyzed by self-pity, I felt like a terribly misunderstood protozoon. Still, I wouldnât mind nibbling it again.

In 2007, Conde Nast Traveler asked a bunch of writers to recommend some travel writing, so I mentioned Evelyn Waugh, Gontran de Poncins, V.S. Naipaul and Paul Theroux, with these caveats, âThe only flaw with Naipaul is the fact that he does not drink alcohol, which curtails his access to many social situations. You get to know the locals best by drinking with them, I believe, and by eating what they eat. In that sense, Theroux is also flawed, by simply being a vegetarian.â You canât quite relate to people if you reject their food or drinks, no?

Bitchy or whiny aspersions are unjustly splattered upon my blameless name, person and reputation by those who expectoratingly accuse me of being, more or less, a ghetto food critic, for I canât stop ejaculating over fried chicken or chicken fried steak, etc.

To refute these inequitable assholes, please join me as we walk, or rather, glide, into the elegant Swan CafÃ© in Zonnebloem, just off downtown. Immediately, weâre greeted by a warm âbon jour!â for this is a French joint, specializing in galettes.

Will you try the Sud-Af, with its streaky bacon, roasted baby tomatoes and mushrooms, plus Emmental and Gruberg cheeses, aged just right, just like your over-the-hill lover? Coy and booby, a sunny-side-up free-range egg peeks from the galetteâs square opening. At just 100 rands [$6.81], itâs not much costlier than an American fast-food breakfast.

The setting is soothingly civilized. Culture matters. On one wall is a nice spin-off of Da Vinci’s Leda and the Swan, with a tiny depiction of Saint George slaying the man-eating dragon in a corner. As one god, Zeus, rapes a woman, a holy man kills a different beast.

On another wall, thereâs a quotation of GÃ©rÃ´meâs Leda and the Swan, with just the swan, swimming infants and flying angels. The naked Leda has been deleted.

The music, too, is not garbage. No, thatâs not Ãdith Piaf, but Juliette GrÃ©co, and now we hear Julie Londonâs âFly Me To The Moon.â Look up to see the lamps, boor! Large bulbs housed in bird cages, they evoke Magritte, non?

Like I said, my articles and photos of South Africa have gotten nothing but positive responses from its residents, and Iâve made several local friends.

One morning, a Captonian sent me two photos taken from his apartment. Although they showed snow capped mountains and the sea (in the distant), he explained that his was only a modest neighborhood, âI mean, câmon, you think white people want to leave these kinds of very affordable and accessible views for another western country where such views are impossibly expensive?â

He added, âIf whites were being murdered [in pricey neighborhoods such as Camps Bay or Sea Point] in a concerted sort of way, and for racial reasons, they would have abandoned those places long ago.â 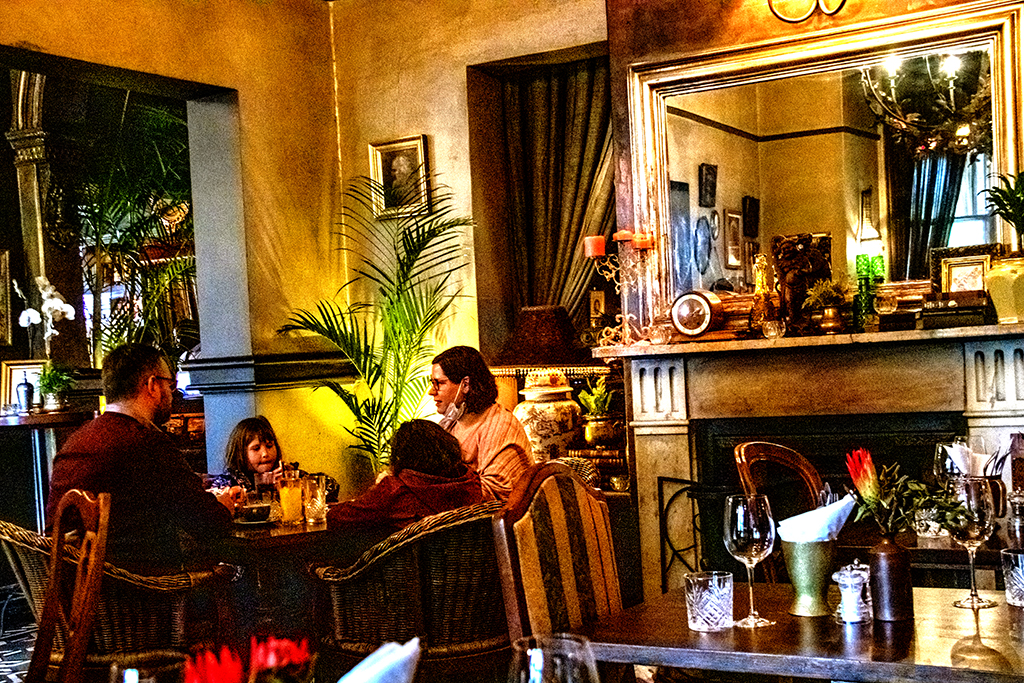 At lunch, I texted my friend, âIâm at Kloof Street House [a magnificent yet cozy Victorian mansion tastefully preserved]. Massive white genocide here! Theyâre dropping left and right from overeating some of the best food anywhere. Theyâre also being massacred by the black jazz!!! Cannonball Adderley! The name itself is evil.â

Unlike most Cape Town restaurants, Kloof Street House employs white waitresses. On this day, there were three gorgeous young women. When I told one that many Americans think South Africa is going up in flames, she cracked up.

âThis is one of the most beautiful cities Iâve seen, and Iâve been everywhere.”

âAnd it will get even better,â she smiled, ânow that the weather is getting warmer.â

I should point out that at places like Kloof Street House and Swan CafÃ©, there are black patrons. There is certainly a rising black middle class here, so South Africa has gotten much better for them.

Plus, South Africaâs still a democracy, with distinct parties vying for votes in fair elections, unlike the USA. There is no dictator here, much less a clownishly brainless one.

Of any color, we can walk around freely, and enter any public space to eat or order a drink, so thatâs exactly what Iâm going to do.

Getting there, I will encounter all these beautiful people.