I live in a square, spartan room with a bed, no chairs, and a bathroom without door, since the builder/plumber hired by brother in law was so half assed. My front wall is only half painted because the man couldnât move his arm any more or further, I suppose. In person, the useless fellow is quite affable. 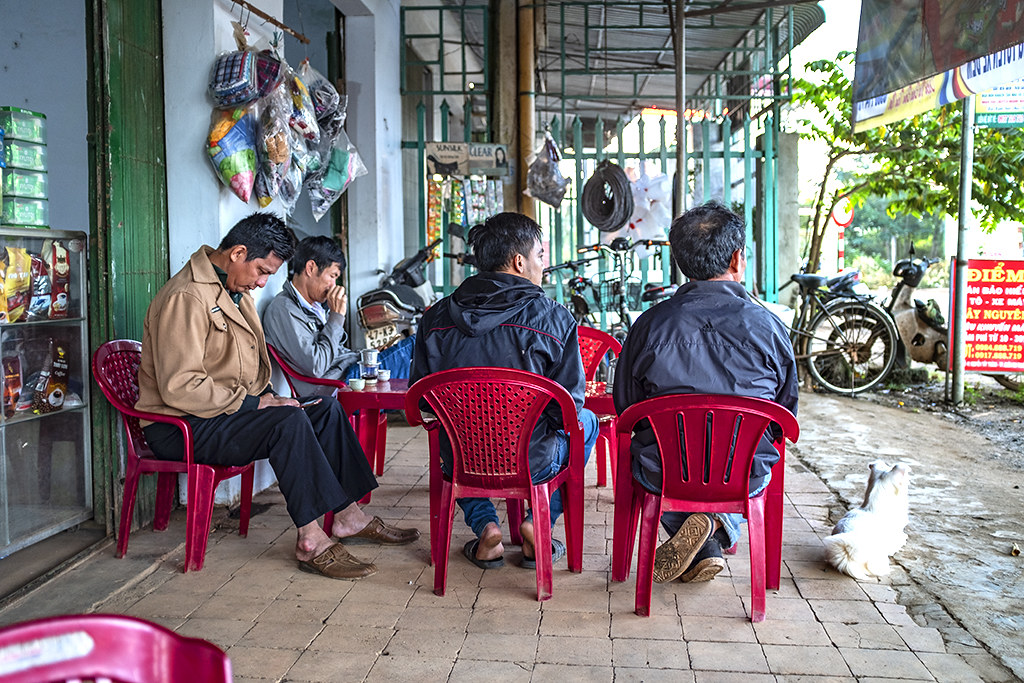 Each morning, I get up around 4 or 5, and by 6 or earlier, Iâll be in a cafe, one of a handful within a minute stroll. After sampling them all, Iâve become a regular at a spot at our busy three way intersection. Here, you can watch long distance buses roll by or stop to pick up passengers, tractor trucks taking Rade to work and school kids on their bicycles. With its constant animation, even before sunrise, itâs our Times Square or Piccadilly Circus, though the houses are all one-storied, signs donât flash, merchandises are mostly less than a dollar, and food choices range from humbling to humiliating, but hey, weâre all here to be put in our places, so if it hasnât happened to your strutting, haughty self, consider yourself cursed.

Another common sense advice I gave my students was that they should claim their territory, write from the ground up, so if theyâre in Missoula, for example, they should immerse themselves in that vast universe, a project that can easily consume a lifetime. By this, I did not mean they should stay in Hicksville forever, for travel provides comparisons and perspectives, but an ever deepening knowledge of at least one place is necessary to give anyone, much less a presumptuous writer, an appreciation of ties, bonds, hearth, home, confinement and gravity, all the things that make us man. Breathe in deeply your neighborsâ effluvia! 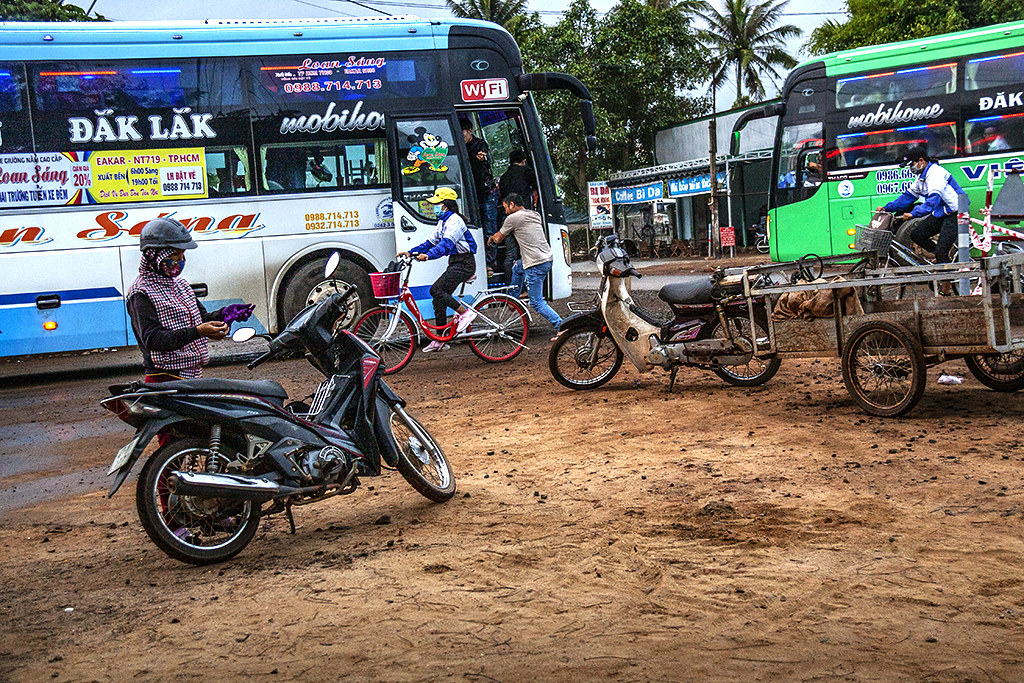 Walking towards Ea Klyâs Shibuya Crossing in the dark, I see a handful of squatting figures, next to their cheap luggage. To my left is the banh mi lady, behind her stall, preparing her meager ingredients. Soon, school kids strapped to cute, colorful backpacks will straggle up to order a 43-cent sandwich, nearly inedible anywhere else, but quite tasty here, for one can get used to anything, and even become fond of it. Reaching my usual table, I sit down on a red plastic chair thatâs not quite sturdy enough to allow me to lean back comfortably. The ownerâs white and cafe au lait colored dogs chase a tiny cat into the shadow. She brings me my usual.

At the next table sits a middle-aged, leathery man with a well-wrung, sunbaked face. Bemused, he listens to the owner recount an incident from yesterday, âThis crazy woman came back and demanded that I find her lost glasses! She was practically screaming! I have never seen anyone like that, brother. If this is how she acts in public, she must be even nastier at home. It was like she had lost a sack of gold, not some glasses! I found nothing, and she left all pissed off!â

Itâs likely the virago was just passing through, for you donât act that way to someone youâll see again and again. Five years ago, I was on an Amtrak slicing through Montana, so met a woman returning to Hinsdale, a town dwindled to just 217 souls, with one bar left, down from three. Staring into the arid, yellow plains, she spoke, âIâd say weâre hard working, donât care for surface and trusting. Here, your words are like the words of God. If you lie once, people will remember,â and so it is in all places where one must know, and canât escape from, oneâs neighbors.

In a more anonymous urban environment, populated mostly by transplants or transients, you can much more easily fuck them or fuck them over without any repercussions, sometimes even without disappearing, for thereâs no community to witness, remember or condemn, and this decivilizing process has been amplified much further by the internet, that ultimate enabler of social irresponsibility.

Is there a more dismal fate than to always be removed from the actual, and if this is somehow voluntary, isnât that the very definition of madness? How miserable must one be to always feel compelled to flee from the present, and to dread all tactility besides oneâs own hand on oneâs own sadness?

Still wearing his helmet, a meek man approaches to mumble, âLottery tickets?â In Saigon, heâd just walk, but here, this purveyor of bad luck must ride his motorbike around, adding to his cost. The thinly patronized businesses are too scattered. 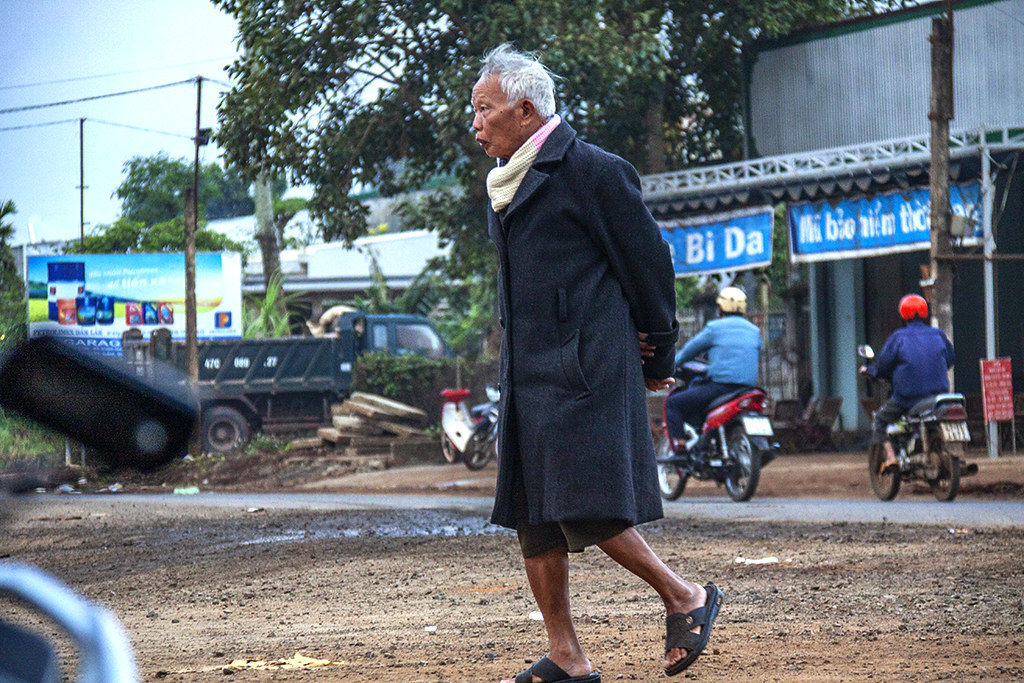 Wearing an old bone-colored scarf, old black trench coat, old long shorts and ancient plastic flip flops, an old, white haired man with black teeth strolls across my vision. Vietnamese used to lacquer their teeth, so in my childhood I could still spot quite a few of these black beauties. Now, they are endangered oddities.

White teeth were dog-like, Vietnamese used to sneer. People everywhere used to be much more independent-minded about all aspects of their lives, but as the world becomes more uniform, it pretends to celebrate diversity.

Too symbolically, about the only times you can hear traditional Vietnamese music any more are at funerals, and in assbackward Ea Kly, there are some mean assed musicians who can raise the dead as well as your deepest, most buried emotions. Bending notes, theyâll wrench out feelings you didnât even know you had.

Thousands of unique tribes have been imperfectly, thank god, Americanized, with the world bifurcated, in the American mind, into âpeople of colorâ vs. whites, but is there a more racist term than âpeople of color,â for it slots whites, again, as unique, if only to be pilloried? Sprung from the same cursed font, Jews, Christians, Muslims and Marxists must divide the world in two, so the politically correct, woke and social justice crusade, with its lynch mob mentality towards heretics, is yet another manifestation of the Judaic chosen people vs. bestial goy. 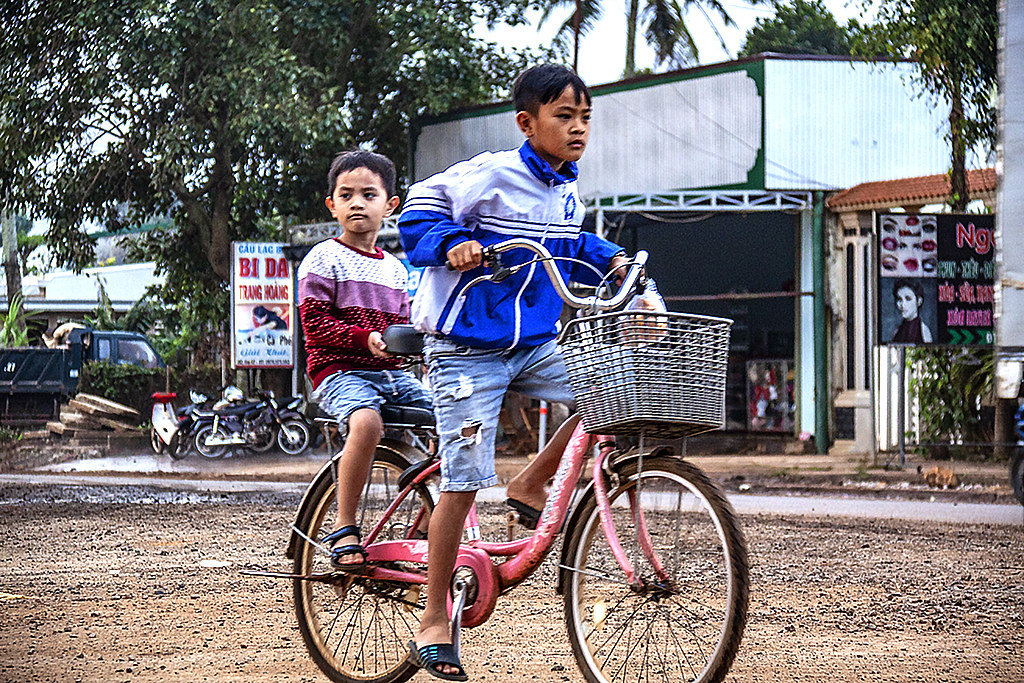 Vietnam, too, has suffered from this violent world view, but the worst of it has abated considerably. Relaxed, the children of Ea Kly ride their beat up bikes slowly, sometimes in swarms, often chatting or laughing.

Dawn pales over our dusty Champ Elysees. With both hands on a crudely hewn walking stick, hardly more than a branch, a bent crone inches towards a store for some shrimp crackers, which may outlast her on the uncertain, hypothetical trip home, a first and ten away, with no one to block for her but God. Though a first round draft choice, he hasnât performed as expected, but his intentions and techniques are way beyond manâs retarded comprehension, blighted as he is with such an abysmal, bargain basement IQ, so I should just shut the fuck up. Yâall must remember that when God misses a block, itâs for your own good. You need the concussion.

In a more advanced society, sheâd be warehoused out of sight, among other incipient corpses. I remember being grabbed at by a wheel chaired, demented man in a San Jose retirement home, his eyes desperate to recognize anyone. I get an email from an old college professor, Eileen Neff, who jokes that she hopes to die before her meager cash runs out. 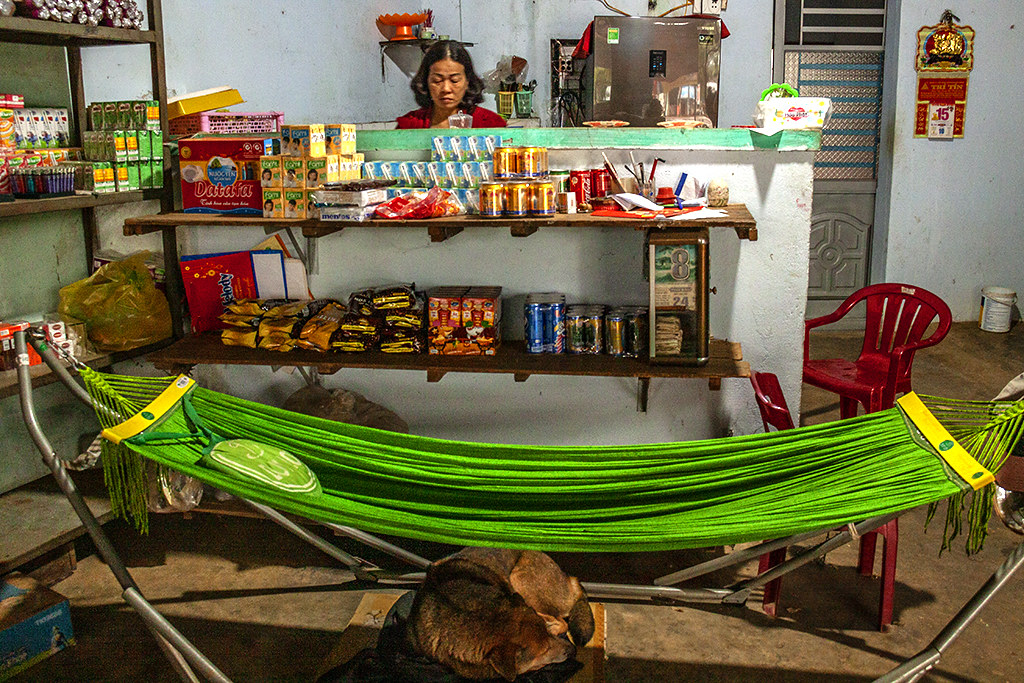 Eminently sane, the cafe owner finds just about everything ridiculous, so laughs often. Normally, she wears a conical hat, but also owns a pink baseball cap, âTHE EMPIRE STATE OF NEW YORK CITY.â When taking my money, she extends two hands, a polite way thatâs become much rarer in cities. Slow to progress, hicks are the truest representatives of any nationality.

With coffee, I also get a pot of tea, free of charge. Tea, coffee, beer and rice wine are the favorite drinks in Vietnam. TÃº XÆ°Æ¡ng (1870-1907) has a poem just about every Vietnamese used to know:

Until roughly a century ago, most Vietnamese were illiterate, so had to hear and retell all of their poems, tales and history. It is within this context that the Ho Xuan Huong tradition emerged. Although there was an actual poet who lived from 1772 to 1822, every poem popularly attributed to her is apocryphal, as proven by a recently discovered batch of her actual writing. It doesnât matter. What matters is that people felt the need for such a bawdy female poet, a sort of Sappho and Catullus rolled into one, so for a century, at least, just about every Vietnamese knew at least some Ho Xuan Huong lines.

Over dinner on the floor in Ea Kly, Ho Xuan Huong came up, so I quoted her two most famous lines, perhaps, from âThe Paper Fanâ:

Stretch me to three points, there is not enough skin,
But close me from both sides, thereâs too much flesh.

To my surprise, none of the other three adults present knew them.

Some may sneer that no one cares about poetry, but thatâs exactly the problem, for a nationâs fiercest bonding agent should be its language, especially when most exalted, inspired or incisive, and in the American case, weâre talking about Whitman, above all, but also quite a few others, according to your taste. Itâs safe to say, however, that at this point in Americaâs collapse, no serious artist or thinker, present or past, can command the attention of more than a handful, for the rest are fixated on whatâs trending on FaceBook, Twitter, YouTube, Fox News, CNN and Chaturbate. For their part, American poets have long given up all attempts at addressing a general audience. Irrelevant to the rest of society, they scramble over each other to retreat into the circle jerking, coed groping and ivory towered safe space of the academy.

Illiterate Vietnamese, then, had a more coherent and unifying culture than postliterate Americans, but Vietnam, too, has been sucked into the numbing world of screen addiction, brainwashing beamed from distant places and erosion of the local, but this toxic condition is not nearly as acute here, as at its source.

Letâs end on a hopeful note. From Americaâs imminent collapse, we may anticipate, or at least wish, for a list of positive outcomes: the recovery of national sovereignty worldwide, including for Americans themselves; the erasure of Israel; the cessation of the serial war on Muslims; the loss of appeal of pop culture and, with it, the relentless promotion of arrested development.

As I finish this, the trashman comes by to pick up our six huge bags of garbage, at $2.15 per, a fair price. It rained for three hours last night, pelting my tin roof, but the relentless thumping no longer bothered me, I slept well. Coffee price just bumped up, a good sign for many of my neighbors, but weâll just have to wait and see. When black pepper stayed depressed a few years ago, some people killed themselves. Despite playing mostly like shit, Vietnam has advanced to the elimination round of Asiad 2019, and will face powerful Jordan tomorrow.

← Man, War and NationRoyal Decrees Must Yield to Village Norms → 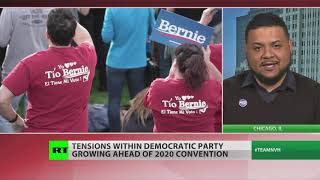