Hanoi, 2017
◄►Bookmark◄❌►▲ ▼Toggle AllToC▲▼Add to LibraryRemove from Library • BShow CommentNext New CommentNext New ReplyRead More
ReplyAgree/Disagree/Etc. More... This Commenter This Thread Hide Thread Display All Comments
AgreeDisagreeThanksLOLTroll
These buttons register your public Agreement, Disagreement, Thanks, LOL, or Troll with the selected comment. They are ONLY available to recent, frequent commenters who have saved their Name+Email using the 'Remember My Information' checkbox, and may also ONLY be used three times during any eight hour period.
Email Comment Ignore Commenter Follow Commenter
Search Text Case Sensitive  Exact Words  Include Comments
List of Bookmarks

With only a week and a half in Hanoi, Iâve been out and about almost nonstop. This article, then, is being jotted down at 5:11AM, as Iâm lying in bed on my stomach at the Letters Home guesthouse. Stuck in a grim alley in an unfashionable neighborhood, itâs not exactly popular, so about the only noises Iâve heard in Letters Home came from my air conditioner or fan. Only rarely does a motorbike beeping, car honking or dog barking reach me.

Generally speaking, overseas Vietnamese are not allowed to publish in Vietnam. About ten years ago, however, an underground publisher, Giáº¥y Vá»¥n [Scrap Paper], did release a collection of my Vietnamese poems. Since only one critic, Inrasara, had dared to discuss it, I simply assumed my book had been flushed down the memory hole, but since arriving in Hanoi, Iâve been told by several young poets that they value my LÄ©nh Linh ChÃ­ch KhoÃ¡i very highly. Of course, this gladdens me.

Three days ago, I ran into the young critic, translator and professor Tráº§n Ngá»c Hiáº¿u, as he sat at a cafÃ© near the Lake of the Returned Sword. (Its long-suffering giant turtle has finally died, by the way. He lived alone for decades.) It was clear that Hiáº¿u knew my Viet poems quite well. Though it was our first meeting, we chattered like old friends. Leaving the cafÃ©, we had goose noodles at some sidewalk stall, then moved to another cafÃ©, for theyâre everywhere in Vietnam.

Facing the street, a Vietnamese coffee house or restaurant displays its patrons to passersby while is itself a grandstand from which you can observe Vietnamâs frantic stream of humanity. Distressingly, some venues are installing plate-glass windows, thus segregating exhilarating, chaotic life from mere commerce.

Poet Bá»m owns a coffee house, Reng Reng. At his suggestion, I showed up one morning to read a short set of my Viet poems, two of which Iâve written since arriving here. âI will chase away your customers,â I said to Bá»m before beginning. âWeâre very lucky to have the poet Äinh Linh here,â he announced to his clientele, all of whom were young, with most fashionably dressed. Two, though, were in factory uniforms. âThank you, uncle,â a woman said to me afterwards. Shaking my hand, a man said the same.

Bá»m took me to an intimate brew pub, Beer Temple, where we had an excellent house-made stout, then a Dutch beer. We snacked on some excellent ham, served with dill pickles, honey and a mournful, defiant mustard. Iâve walked past Korean, Japanese, Mexican, Italian, German, Russian and Czech restaurants. Doner Kebab stands are all over. In 1995, one could hardly find cheese in Hanoi, and I remember wandering into its most sophisticated cafÃ© to find a peasant sip spilled coffee from his saucer. On the walls were photos of Catherine Deneuve.

Yesterday, I walked into a small, elegant bookstore at the end of a thin, short alley. To my astonishment, the owner immediately recognized my name. After we had chatted a bit, he stated with amusement that he had once been fined for selling my anthology of new Vietnamese fiction, Night, Again. Still grinning, he then asked if I had been dragged in to be questioned by the authorities. âNot yet,â I chuckled. When the Vietnamese-Australian writer, musician and literary webzine editor HoÃ ng Ngá»c Tuáº¥n returned to Vietnam several years ago, the cops interrogated him for hours. Back Down Under, Tuáº¥n emailed me, âThey mentioned your name.â

Writer Nguyá»n ÄÃ¬nh ChÃ­nh joined the North Vietnamese Army at age 18, fought in the war. He tracked me down to give me a book of his. Iâm supposed to come to his house later. Itâs nothing for a Vietnamese to welcome you into his home.

As in the US, Iâm most interested in how ordinary people are getting by. Yesterday, I talked to a waiter who had spent 13 years altogether in Germany, first as a contract laborer. Sent back to Vietnam after the collapse of the Berlin Wall, he sneaked back into Germany several years later and found work in Vietnamese restaurants. Caught in a raid, the man was deported, so Europe was like a sweat-drenched dream. He wonât likely see it again.

Though not making very much in Hanoi, he has managed to send three kids to college, with two aspiring to become doctors, and the third, a computer programmer. âGermany is closer to Socialism because the rich are willing to share some of their wealth with the poor. Here, the rich just grab and grab. They suck the blood of the poor.â The richest Vietnamese are the top members of the Communist Party, of course. 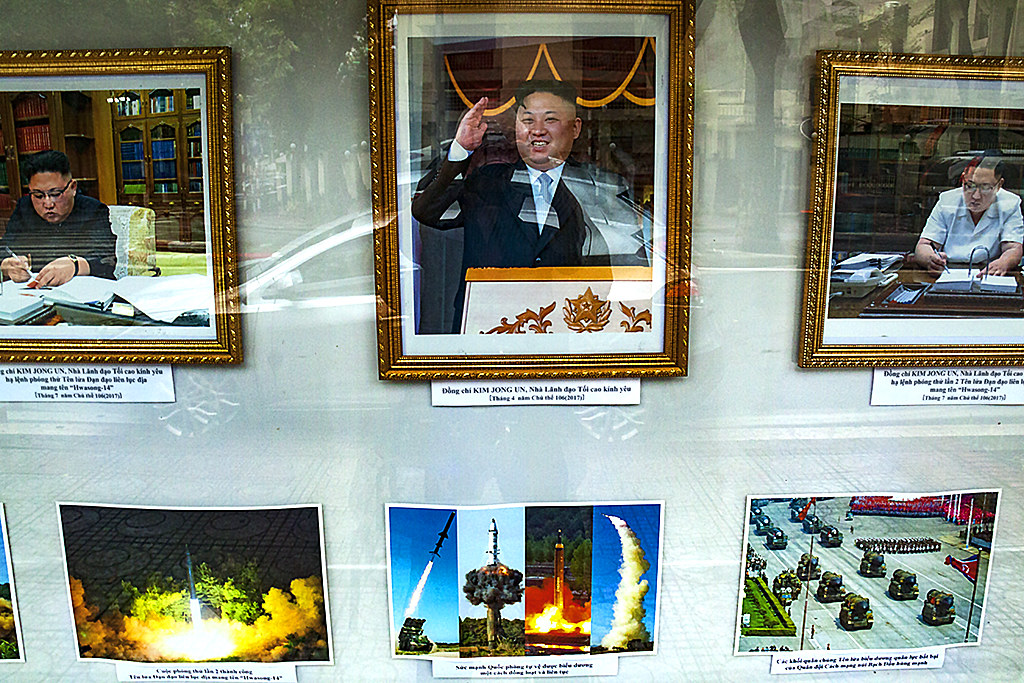 Outside the North Korean embassy, thereâs a wall-mounted glass case featuring three photos of âComrade Kim Jong Un, beloved Supreme Leader.â Below him are images of missiles being launched with much white smoke and/or fearful red flame. Watch out, Juneau and perhaps even my Philadelphia hovel! No one but me paid the least attention to this display.

About the only sign of war in central Hanoi is a large hole on the massive North Gate, built in 1805. It was caused by a canon ball fired in 1882 from either the Surprise or Fanfare, two French ships.

Much of Hanoi Hilton has been knocked down to make room for a real, high class hotel, the Somerset Grand. I received an email from Dominic DiTullio, the owner of the Friendly Lounge, my local dive in Philly, âHello Linh, Hope all is well. I know you are enjoying your trip. As long as the authorities are letting you keep your fingernails. Looking forward to see you again. With stories and pictures. Stay well Dom.â

I replied, âYo Dom, Iâm in the John McCain suite at the Hanoi Hilton. Itâs very sparsely furbished, with just a plastic bucket in a corner, and the food is a bit plain. When I begged for a glass of beer, the warden said I was welcome to drink my own piss.â

Always angry and humorless, totalitarianism doesnât tolerate word plays or any sort of verbal ambiguities. Outlawing witticisms, it insists on righteous bombast. Since Vietnamese must constantly amuse each other with words, they chafed under such an inhuman regime. With Communismâs slackening, the Viet tongue is regaining its playfulness and vitality, and you can see this even on shop signs. There is a BÃ¡c TÃ´m [Uncle Shrimp] natural food store. Itâs a play on the English âUncle Tom,â of course, but a slippery, what-are-you-talking-about? dig at the countryâs most famous uncle, for no Vietnamese is ever called TÃ´m [Shrimp].

At Club Civilize, thereâs a weekly gay leather night dubbed Mensay, which is a two-language triple pun, for âmen sayâ in Vietnamese is simply, âfermenting yeast.â In Vietnamese and English, it becomes âdrunken men.â Drunk, fermenting men in leather are saying something. Come inside to find out, I suppose.

As with everywhere else, American culture permeates Vietnam. At CafÃ© TrÃ­, thereâs a large, static image of Taylor Swift on the television screen. It was almost a shrine. My waitress was a stout lesbian sporting a short haircut. On the next block, five framed photos of Obama graced BÃºn Cháº£ HÆ°Æ¡ng LiÃªn.

At another hole-in-the-wall coffee house, the KPop group Super Junior were prancing on the television, singing, âMamacita, nigga, ayayaya!â Sitting on a plastic stool, the young, pony-tailed waitress was mesmerized.

Still, Vietnam is a world away from the US, so almost no one here cares about Donald Trump, transsexual bathroom privilege, Star-Spangled Banner kneeling controversy or Black Lives Matter. Attending an expensive school, a privileged, bi-racial boy saw his American teacher sob at news of Trump victory. She cried alone.