Itâs cold yet sunny on this Christmas morning. Standing outside, Iâm surrounded by a squadron of winged insects. Dots of light, they hover and meander in air tirelessly. Like drunk pinballs, they jerk, dance and bounce down invisible grooves, and around unseen obstacles. No, theyâre more like ponderous thoughts. (Your jumped-up synapses are but flying insects.) Now and then, each would dart decisively, like a jabbing boxer unleashing a right cross or hook, but for what purpose, I have no idea, being no insect, not even a very stupid one. 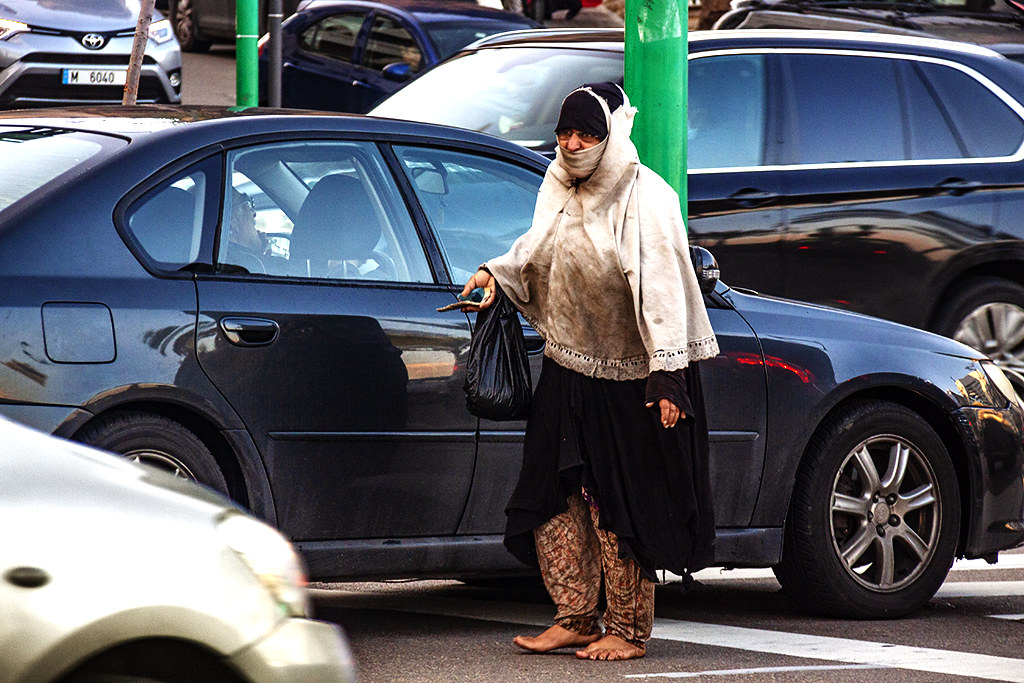 After nearly three weeks in Beirut, Iâm back in southern Lebanon, in a village where life is still tranquil, and signs of obvious economic or social distress are nonexistent, unlike in the capital. Extended families ensure no one starves, or goes without shoes.

The day after I returned, there was collective mourning, however, for a 22-year-old native son had just been martyred in Syria. Within half a day, his body had been brought back, and banners and posters bearing his handsome portrait went up.

At dawn, speakers broadcast a plangent prayer, and this went on, episodically, throughout the day. On foot or in cars, mourners converged on the funeral, with some children dressed in military uniforms. Theyâre all proud to honor one of their own. With so many Hezbollah fighters clustered, security was airtight.

A community canât survive if no one is willing to die defending its values.

As if to reinforce this most obvious, yet still often forgotten, truism, I just received a most incisive email from a Lebanese-American, Frank Isabelle.

Born in Columbus, Ohio, Isabelle has been lucky enough to spend many ârestful and carefree summersâ in his ancestral Lebanon. At the entrance to his grandmotherâs village, thereâs a mural, âSalima, the village of the resistor Ghassan Saeed, welcomes all.â

Who is this man Ghassan Saeed? Frustrated with what he felt was a tepid response to the Jewish occupation of Lebanon, Ghassan and his fellow countrymen organized an informal cell to engage in resistance activities. Acting of their own initiative, and without any support from the all too numerous militias of civil war Lebanon, Ghassan was eventually imprisoned in an ambush while his comrade Pierre attained martyrdom. Today, Ghassan works as a mechanic.

Is it possible to imagine such a noble and pithy sentiment adorning the entrance of an American suburb? Of course not. For Americans, nothing seems more natural, more scientific than allowing their life to be rationalized for them. They not only live at the end of history, they also love nothing more than gloating over their static, passive existence. I canât think of anywhere else in the world where people are proud to be so aggressively babied. But thatâs the way it is with Americans.

Too harsh? Hardly. Cowering offensive lineman-sized babies can certainly use a few Younghoe Koo kicks in the ass, to jumpstart them, finally, into battle against their Jewish occupation.

First, though, they must give a shit about their village, hood or subdivision. Isabelle:

All day on Lebanese television, there are scenes of exuberant or somber Christmas celebrations in Lebanon and Syria, and itâs impossible to not be moved by reverent images of Biblical sites, historical churches, lovingly restored frescoes, children praying at home or Holy Communion taken in magnificent settings.

In Muslim-majority Lebanon, folks of whatever faith, or none at all, still retain enough of an innate sense of decency to not put up with any Christmas-capped talking turd or psycho Santas slashing innocents. Unlike in Israel, Christians are not spat on here. Meanwhile, Americans have long been conditioned to laugh at, and even pay for, their own degradation.

Most may think of Lebanon as a land of sectarian violence, with religious militias slaughtering each other, but coexistence has actually been the norm. Ancient Christian villages abut Muslim ones.

A short drive away from me is Anqoun. With its large portraits of Nasrallah and 25 martyrs who died expelling Jews, you know youâre in Hezbollah country, but just five minutes away is Maghdoucheh, the most sacred Christian site in Lebanon. Its resilience is worth examining.

The Christians of Maghdoucheh count themselves among the earliest. Saint Paul and Jesus preached in nearby Sidon, visible down the hill.

In 326AD, Saint Helena summoned a Maghdouchian to Constantinople, for she had heard about a sacred cave in faraway Phoenicia. There, the Virgin Mary had sheltered as her son preached, locals believed. Finding the Maghdouchianâs account convincing, Saint Helena sent an icon of the Madonna with baby Jesus to Maghdoucheh, where it still is today, locals believe, inside the cave.

For a millennium, both cave and icon disappeared. After the Muslim conquest, Magdouchians fled to Zahle and Zouk, each a dayâs hike away. Abandoning their village, they covered their sacred grotto with earth, rocks and vines. 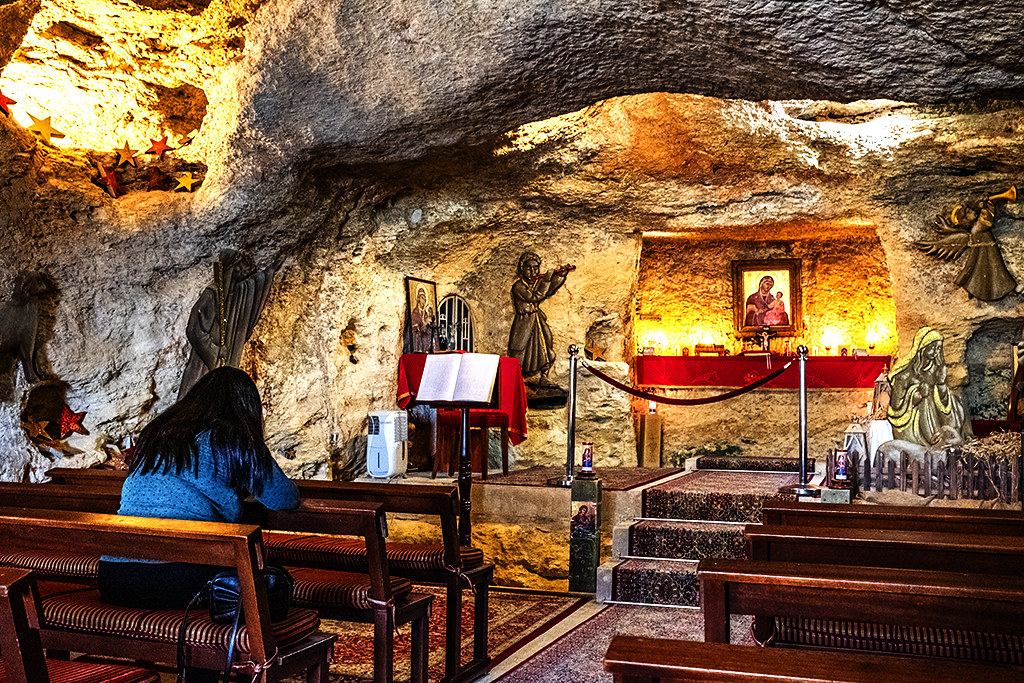 Returning 900 years later, they could no longer find it, however. Another century passed before the cave was rediscovered, by accident, when a kid goat fell into a hole in the ground. Thrilled, Magdouchians placed their icon inside a new chapel, but twice, it returned by itself to the cave, locals believe, so there it was the other day. In the soft yellow light, three women prayed to it.

Outside the cave, thereâs a marble statue of a sitting Madonna, with a plexiglass sign behind her, in French, Arabic and English, âIâm waiting for my children.â

No sightseer, I had been to Magdoucheh a dozen times, but only to visit Abou Jihad âKing of the Drinkâ Liquor Store. This is also Ali the driverâs favorite pilgrimage. 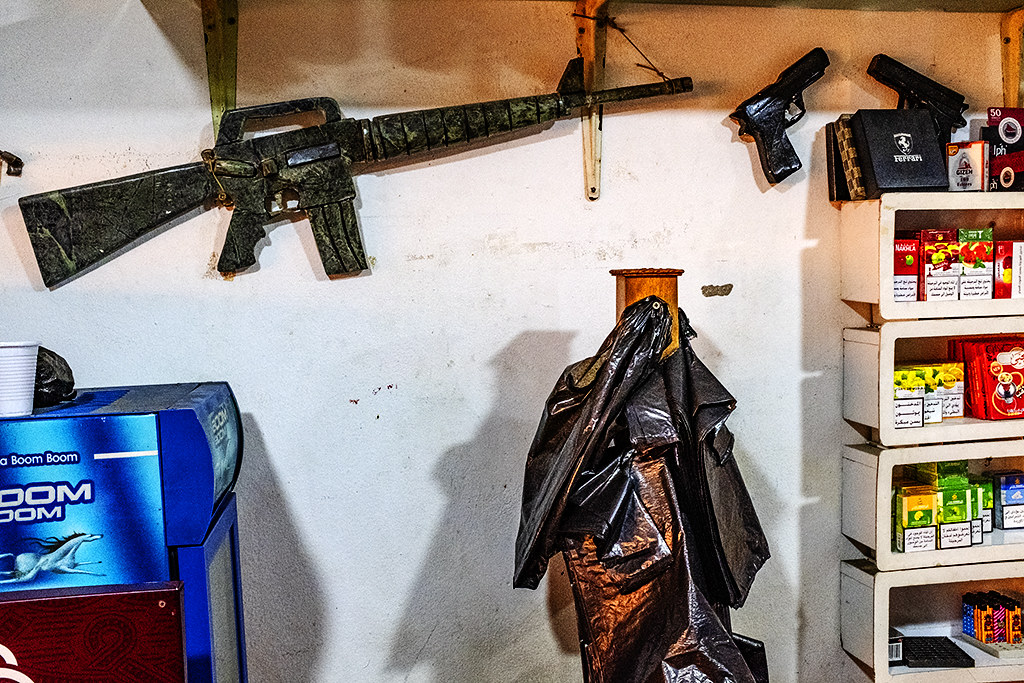 With Ali translating, I asked the 60-ish owner how long she had lived in Magdoucheh? Looking surprised, she answered, âAll my life! My grandmother was here, and my grandmotherâs grandmother.â On her wall was a mock but life-sized M-16, and two fake pistols, as decorations.

When Israel attacked Lebanon in 2006, some Magdouchians were nervous their village might be targeted by enraged Muslims, but Hezbollah reassured them this would not happen. It backed this up by protecting Magdoucheh and all other Christian villages inside its territory.

2020 saw the assassinations of a top Iranian general and its leading nuclear scientist. An explosion in Beirut wrecked its port and hundreds of buildings. Though the war in Syria has cooled down, it persists. To most Lebanese, these attacks are parts of the long-standing Jewish/American war on the Iranian/Syrian/Hezbollah Axis of Resistance (against Israel).

So whoâs winning this conflict? Obviously Israel, if you consider how their recent assaults have met with almost no retaliation, and how many Muslim nations have normalized relations with the Jewish state. Just this year, the United Arab Emirates, Bahrain, Sudan and Morocco have done so, and soon, Oman, Pakistan and Indonesia may join them. Israel is here to stay, itâs clear, while the Axis of Resistance is economically crippled, diplomatically isolated and militarily impotent, no?

A closer look, though, will reveal that Israelâs solidity is entirely illusory, for its sugar daddy, slave and hired gun has been economically, politically, socially, intellectually and morally imploded, thanks, in large part, to the machination of Jewish power, ironically.

Driven by spite, hubris and contempt, it doesnât know when to stop. Wagging the dog for decades, the all-too-clever tail has just about killed it. Uncle Sam has been reduced to a limp and blathering cross-dresser with less than a penny in his pockets.

Ah, but Sammy and his Jewish boss still have plenty of nukes! Going under, they may not hesitate to unleash a bunch. To get rid of the Jewish/American Axis of Evil, this might be the price Lebanon, the Middle East and the rest of humanity will have to pay.

Flying into Beirut two months ago, I suspected explosive events by the end of the year, especially near the American presidential election. Despite continuing turbulence everywhere, life has limped on, however, within the sick terms of our new normal. 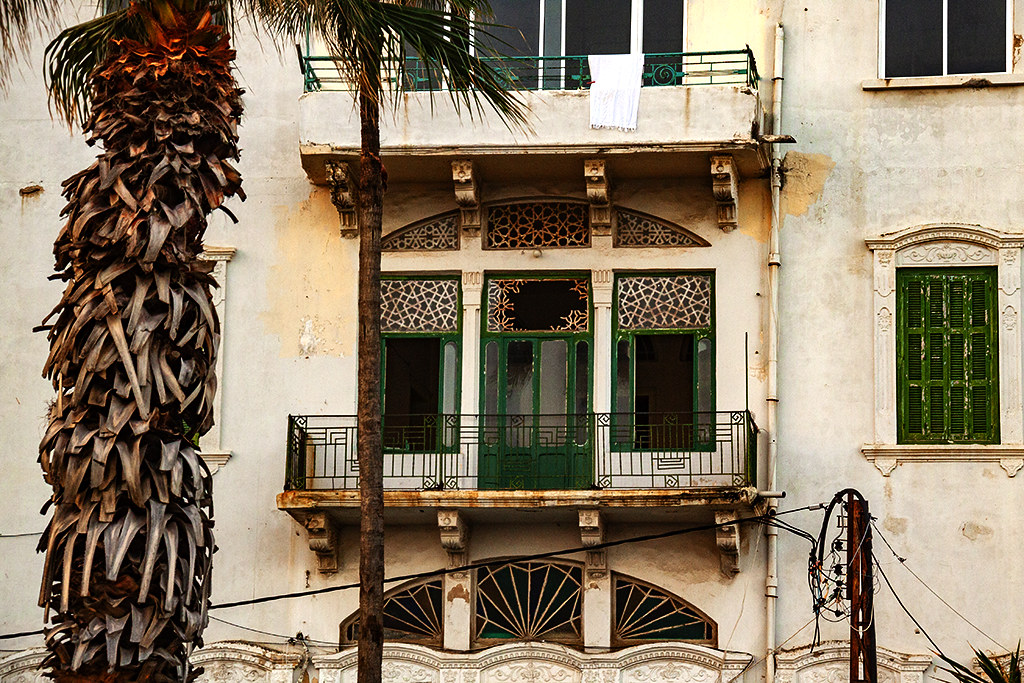 In three days, Iâll leave for Cairo, the Mother of the World. Lovely Lebanon is still at peace, and thatâs what I will remember. I wonât forget its rocky hills, olive groves, large curtains over entire balconies, old houses still stunning despite much neglect, quirky purse-shaped bread and relaxed, pleasant people everywhere.

Though the next cataclysm seems imminent, it will surely rise from the ruins.