In Hanoi in 1998, poet Phan Huyen Thu gave me an anthology of the earliest Vietnamese prose, a book thatâs now in a box in Moorestown, NJ, at my friend Ian Keenanâs house. Along with all my other books, which constitute my mental terrain, roughly, I wonât see it again. Life is loss, in installments.

Though I read every page with much interest, all its characters have disappeared, except a certain ghost that used to bother people at a Hanoi wet market. Meaning no harm, he was just frustrated, itâs clear, at not being seen and heard properly, like the rest of us, especially now.

In a 15th century account of just over 100 words, this ghost lives, then, an individual with sane, normal needs. Though fleshless, heâs social and keeps no distance, unlike too many of us, entombed, as we are, in a chimeric fear. Snap out of it, fools!

Granted, we had faded into nearly nothing even before this. By consensus, we had agreed to become mostly virtual. Still, handshakes were normal, hugs were OK and we routinely saw each otherâs lips, teeth and tongue. Now, with our bodyâs last exposed orifices concealed, we move singly along, rubbing against nothing.

This regiment of self-erasure hasnât been followed universally, however. Here and there, as in Sub-Saharan Africa and most of the Balkans until recently, people have maintained their ordinary tics and intercourses. During my 21 months of Covid-enforced wandering, Iâve been lucky to encounter life as it has always been, with people, almost unthinkingly, just being themselves, most gloriously. Letâs meet three.

In downtown Skopje, thereâs Ramstone Mall, which bills itself as not just a center of shopping, but of friendship. Filled with anticipation, I barged in and wasnât disappointed. In a wooden shack, thereâs a white haired man drawing portraits under a sign, âART STUDIO/ SAIGON / SABEDIN EJUPI.â

âExcuse me, Sir, but why is your studio called Saigon? Iâm, uh, from Saigon.â 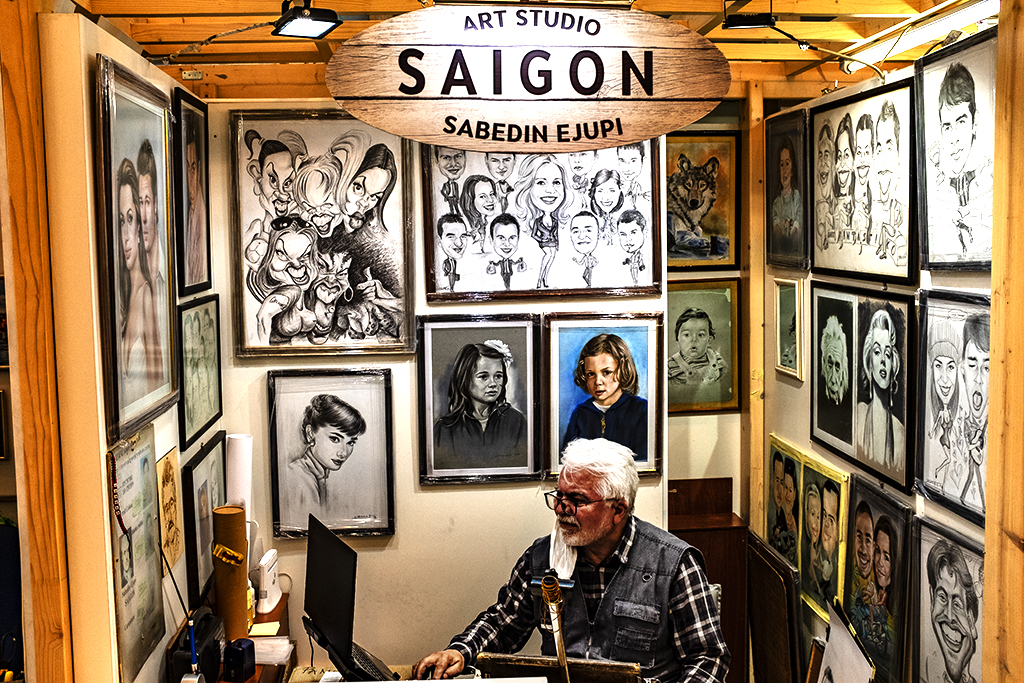 Showing not the least surprise at having such an unlikely visitor, 64-year-old Sabedin Ejupi explained that when he was 11, a chocolate company had a promotion. Each piece of chocolate came with a picture of a national capital. If you could collect the entire set, youâd win a prize.

Sabedin and his friends, then, bought way too many pieces of chocolate. With infinite patience, they gathered, you know, Washington, Paris, Moscow, Peking, Seoul and Cairo, etc., but no one ever came up with Saigon. With the Vietnam War raging, that elusive city was always in the news, like a daily taunt to these frustrated Macedonian boys.

Fate touched Sabedin, however, for he heard there was a place that sold these pictures. He went there and, sure enough, they had the extremely rare Saigon one! What a miraculous snatch!

Winning, Sabedin wasnât just the envy of all his friends, he became Saigon, that unreachable, ghostlike city now reduced to just one tiny, inaccurate photo. It could have been anywhere, really. More Saigon than me, Sabedin was still Saigon half a century later, and heâll die as Saigon, of course, without ever seeing his namesake.

My first morning in Cape Town, I walked nearly the length of Kloof onto Long. In any new city, each building is curious, each shop sign, each passerby. Near the corner of Wale, some grinning guy at a sandwich stand yelled at me, âHey!â

I just had a long flight, I thought, with two layovers. I slept on the floor in Rome. I havenât had breakfast. Just leave me alone, man. I donât want your sandwich. Looking at him, I nodded and grinned, quickened my pace.

Each time after that, he would do the same, even when I was on the other side of the street, so I said, âYouâve got to stop yelling at me, man. Iâm afraid to walk by you!â

Finally, I bought a cup of coffee from this dude. We talked. As I got to know him better, I realized he yelled at everybody, in the most cheerful way. Seeing a woman walking by, he might say while putting two fists to his chest, âOh, Iâm so happy!â

âYouâre a total whore, man. You flirt with every woman!â I ribbed.

âHey, thatâs a good attitude. I hate guys who always judge women. Sheâs this, sheâs that, but then, look at you, man!â

âThat one.â Studiously, we stared at this lithe woman in a tight, gray dress strolling away.

âI canât say hello to her if I donât see her.â 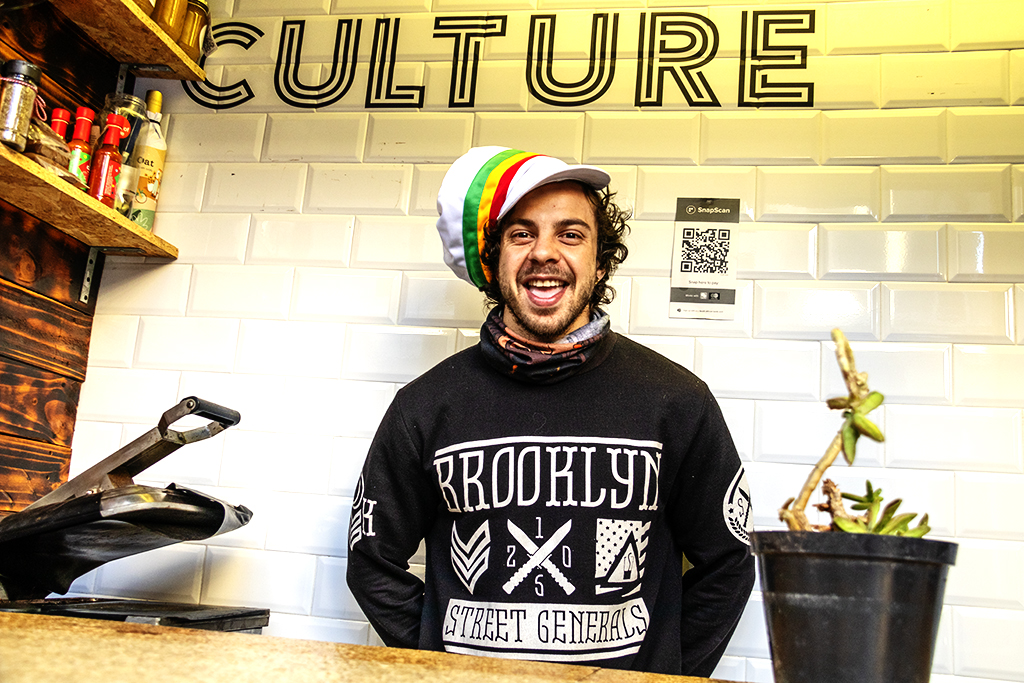 Twenty-seven-years-old, he had never been outside South Africa. Though white enough, he actually had a colored father, whom he had no memory of. His dad was abusive to his mom, so she moved away and raised two sons alone. Sheâs English.

Like most working people, he was not a reader, itâs clear, so his knowledge of the world was very limited. So what. Once, he asked me if the Portuguese language was native to Angola? Another time, if cheeseburgers were popular in the USA?

Like most South Africans, heâs fluent in Afrikaans and English, of course, but since he didnât have a third language, like most South African blacks, he was trying to teach himself Xhosa. Itâs not easy, he stated, for there were few resources online, but he was determined. Each language is a new, unsuspected universe. Plus, none is as rooted to that land as Xhosa. Going nowhere, he dug.

Already, Iâm in Windhoek five weeks. Iâve just moved into my second apartment. Itâs bigger, quieter yet cheaper. My landlord is an Indian whoâs interesting to talk to.

Most of the streets in my neighborhood honor German composers, Beethoven, Bach, Wagner, Brahms, Schubert, Strauss, Mozart and Gluck. Hey, where are Mendelssohnstrasse and Schoenbergstrasse?! For such blatant antisemitism, Windhoek must be renamed Stevereichstadt, Bobdylanburg or, simply, Streisand.

Compared to Cape Town or, frankly, Columbus, Ohio, Windhoek is a bit dull, but this suits me fine, for I need rest. There are no cafes or restaurants near me, just an old woman across Beethoven who sells lunch, I suppose, from a single pot. I havenât asked her to lift the lid.

Half a mile away, though, thereâs Old Location, a bar and restaurant named after a black neighborhood that was cleared out by the South Africans, when they ruled Namibia.

Drinking a Hansa there one day, I met our final character for this article. Seeing Joana walk in, the barmaid tensed up, but served her anyway. A short, wild-eyed woman in her 60âs, Joana lost no time raving. Clearly unhappy with this earth, she started to rant about space exploration.

âSo youâre a philosopher,â I said.

âWhy do you want to go to space? Thereâs nothing there. Iâd rather stay here.â

Turning to the barmaid, I asked, âDo you want to go to space?â

âNo, Iâm just saying. Thereâs nothing out there. Everything is here.â

âYouâre right. It is horrible, but everything is here.â

Frowning slightly, the barmaid clearly didnât want me to encourage Joana, but it was too late. I learnt she was an ex-teacher who lived with several relatives just down the street. âCome,â she said, âI want to show you how we live.â

Leaving my mug, I said to the unsmiling barmaid, âIâll be right back.â Joana walked out with her beer.

In Vietnam or Naples, you can often see how strangers live by walking by their homes, or stare into their rooms from your upper floor window. In the USA, you can live next to a cannibal for several decades without knowing it. 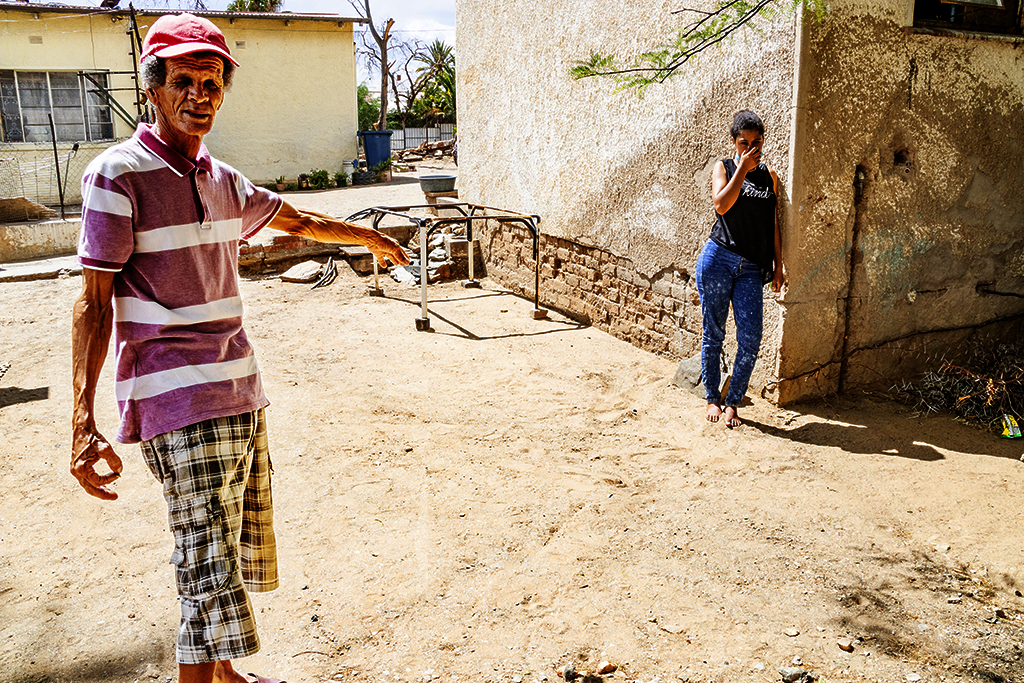 Just like that, I met an articulate old man, cigarette smoking old woman, smiling young woman in curlers, pretty teenaged girl and a chubby boy, all related to Joana, and all living in houses without electricity or running water. Useless TVs, stoves and microwaves silently mock them.

The old man had been a laborer until disqualified by age. The woman in curlers was unemployed, though with an associate degree in tourism and hospitality. The teenaged girl was Joanaâs granddaughter. After her mother had died, her father disappeared. 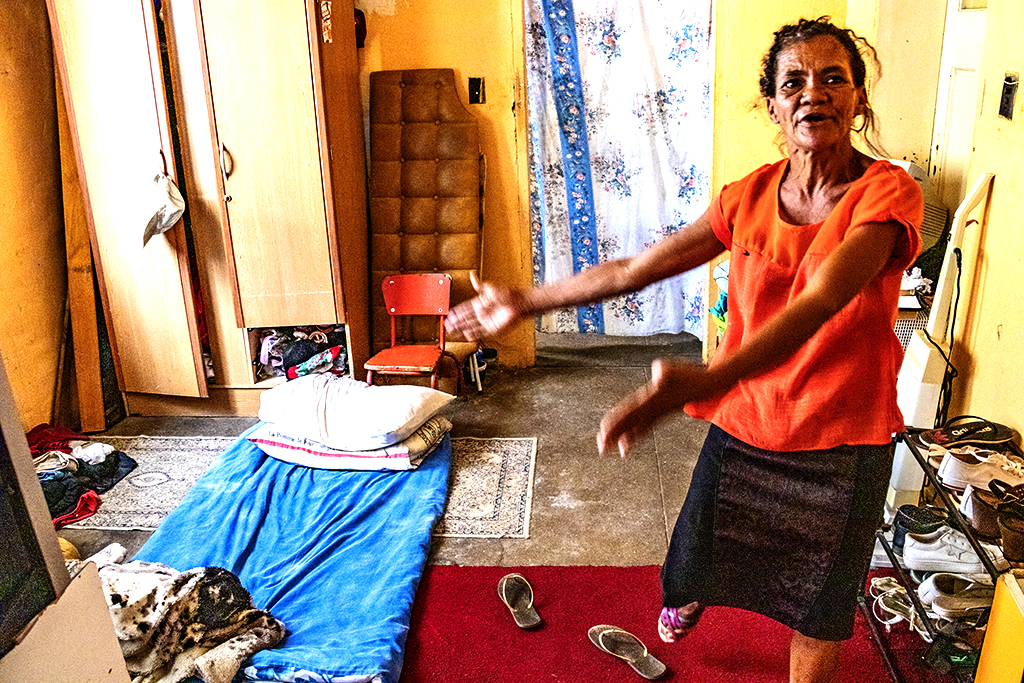 In Joanaâs home, I noticed a bible in English, but also My Groot-Groot Storieboek in Afrikaans, with marked her as a Baster. Her lighter skin reinforced this conclusion. Of mixed Dutch and Bushmen ancestries, Basters are centered in Rehoboth, a town of just 29,000 people. Itâs instructive how they cling to their bastard heritage. You are who you are.

With indignation, Joana showed me her just-received layoff letter:

We write this letter to inform you that your services have been terminated effective 1 November 2021. This has been necessitated by your continued absence from work.

This has costed the school a lot in terms of service delivery, if not reputation. It is paramount that your perennial illness can not be tolerated. The school through the Principalâs Office tried to consel you to clarify that your frequent unauthorized absence from duty is not encouraged in our work environment, but you did not take heed of this.

Despite the warnings and a fair chance to mend your ways, there has been no change [â¦]

As the only one working in that extended family, Joana should not have tossed her job away, obviously, but I donât know the forces that have shaped or deformed her down the decades, nor if I could have survived them any better. We slog along until we break down, go mad or drop dead.

Stumbling along, we often help each other, but suddenly, all basic human acts, from smiling to touching, or just being together, etc., are absurdly thwarted, if not outlawed. Even breathing freely has become illegal. Keep your mask on, over your nose!

Beyond madness, itâs evil. Only the most moronic or complicit can excuse this anti-life agenda. There are no missteps here. Theyâre squeezing the life out of us, step by step, deliberately.

A while back I suggested that, at the very least, each man should be left alone to be ordinary. Sneering, a supercilious reader countered that Jews must aspire for the sublime and, moreover, we should follow their example!

The divine, though, is already in every batted eyelash, grain of rice, smallest act of generosity or scuttling cockroach. Normality is our birthright. How dare they pervert that, and why do we go along? ← Magnificent Cape Town, Quiet Windhoek, ...Darkest Christmas →
Current Commenter
says:
Current Date at Time Now
Leave a Reply - Commenters who are not discussing the article, but are only indulging in ad hominem attacks, will not be tolerated.
Cancel Reply
Commenting Disabled While in Translation Mode