Busan, 2020
◄►Bookmark◄❌►▲ ▼Toggle AllToC▲▼Add to LibraryRemove from Library • BShow CommentNext New CommentNext New ReplyRead More
ReplyAgree/Disagree/Etc. More... This Commenter This Thread Hide Thread Display All Comments
AgreeDisagreeThanksLOLTroll
These buttons register your public Agreement, Disagreement, Thanks, LOL, or Troll with the selected comment. They are ONLY available to recent, frequent commenters who have saved their Name+Email using the 'Remember My Information' checkbox, and may also ONLY be used three times during any eight hour period.
Ignore Commenter Follow Commenter
Search Text Case Sensitive  Exact Words  Include Comments
List of Bookmarks

Near my guesthouse in Busan, thereâs a Mongolian restaurant, Chinggis Khaan. On its sign, thereâs a portrait of the conqueror, looking stern, with a lineup of archers on horseback, behind him.

Though I had walked by Chinggis Khaan many times, I never entered because I thought it was probably some jive joint, run by Koreans. Located in a basement, it offers no clues to whatâs inside. 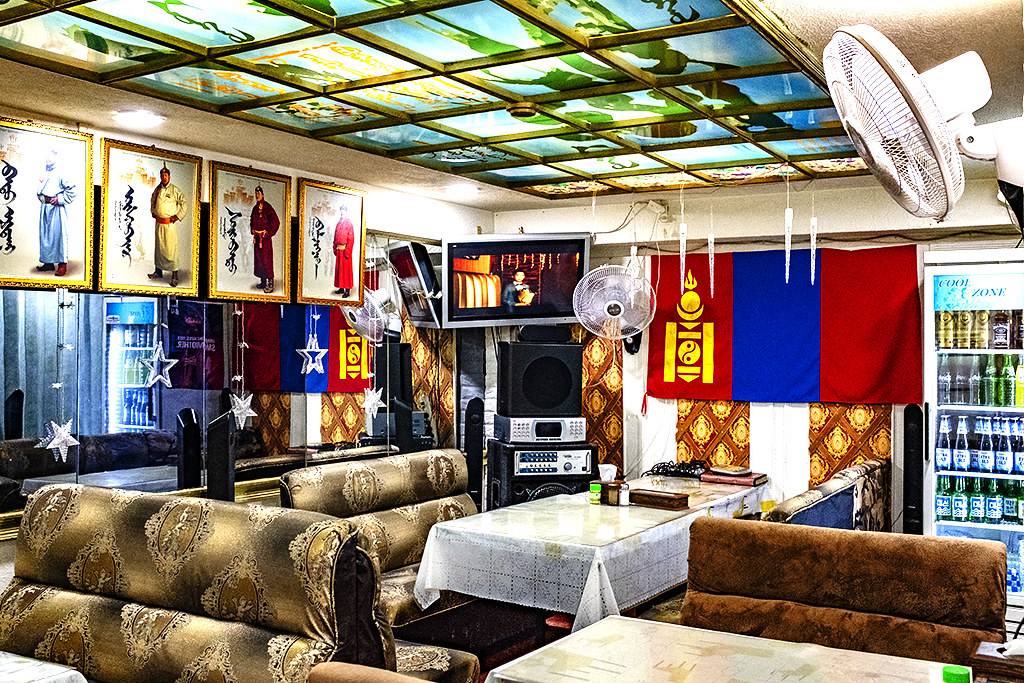 Seeking a respite from kim chi, I finally entered Chinggis Khaan yesterday, to discover that itâs practically a shrine to Mongolian nationalism.

Soon as I opened the door, I saw the baddest man ever staring back at me, and flanking Genghis were eight other khans. On a side wall was the Mongolian flag, and a television playing Mongolian music nonstop.

One had âChinggis Khaan, Chinggis Khaanâ as its refrain. With so much rousing, badassed music, it was impossible to focus on my mutton. I just felt like standing up on metal stirrups to shoot arrows at anything that moved.

One of Mongoliaâs top bands, The Hu, derives its name from Hunnu, or Huns. In the accusatory âYuve, Yuve, Yu,â they growl:

In Mongolia, Genghis Khan is back all right. Just outside the capital is a 131-foot equestrian statue of the man, and Mongoliaâs highest honor is The Order of Genghis Khan, of which only one is awarded yearly. The Hu is its latest recipient. It wasnât long ago that Mongolian scholars of Genghis Khan were killed by the Soviets. Their crime? Nationalism.

For Genghis Khanâs 800th birthday in 1962, Daramyn Tomor-Ochir authorized a celebration. As the second highest member of the politburo, he felt secure, but just like that, Tomor-Ochir was kicked out of the party, jailed, sent into internal exile, given only lowly jobs then finally murdered in 1985 with an ax, his killers never caught. As a rising Communist, Tomor-Ochir had denounced Byambyn Rinchen, a leading scholar and writer, for his nationalism.

Internationally, the Great Khan is also enjoying a revival, though in 1992, Time Magazine still listed him as the worst villain of the last millennium, with Tamerlane coming in second. Is there an anti-Mongol/Turco/Central Asian/nomadic bias here? Someone alert the Anti-Defamation League and National Association for the Advancement of Colored People! Yellow horde lives matter! At least Attila the Hun didnât make the top ten.

In 1995, however, the Washington Post simply crowned Genghis Khan as Man of the Millennium, period, beating out Christopher Columbus.

In an often cheeky editorial, Joel Achenbach rhapsodized, âGenghis Khan was a doer [â¦] Genghis Khan reached out and touched countless lives. Ended them, in fact [â¦] Like Columbus after him, Genghis Khan shrank the world [â¦] He and his descendants created a vast free-trade zone across Eurasia and greatly enhanced the linkage between the civilizations of the East and West [â¦] The Mongols [â¦] pioneered global communications seven centuries before the invention of the Internet.â Genghis Khan was a pioneer of globalism, in short.

In his 2004 book, Genghis Khan and the Making of the Modern World, Jack Weatherford elaborates:

In American terms, the accomplishment of Genghis Khan might be understood if the United States, instead of being created by a group of educated merchants or wealthy planters, had been founded by one of its illiterate slaves, who, by the sheer force of personality, charisma, and determination, liberated America from foreign rule, united the people, created an alphabet, wrote the constitution, established universal religious freedom, invented a new system of warfare, marched an army from Canada to Brazil, and opened roads of commerce in a free-trade zone that stretched across the continents. On every level and from any perspective, the scale and scope of Genghis Khanâs accomplishments challenge the limits of imagination and tax the resources of scholarly explanation.

Unlike a wealthy, slave-owning planter like Thomas Jefferson, Genghis Khan had been a slave, and he beat the American by nearly six centuries in establishing the rule of law and religious freedom. Granted, dude wrote nada, since he couldnât write, but he porked many more babes than the philosophical Jefferson, for sure, and itâs doubtful he bothered with courtship. Whereâs #Me Too on this? According to Oxford University, Genghis Khan has 16 million descendants.

Already in 1260, Ata-Malik Juvayni observed, âOf the issue of the race and lineage of Chingiz Khan, there are now living in the comfort of wealth and affluence more than 20,000. More than this I will not sayâ¦ lest the readers of this history should accuse the writer of exaggeration and hyperbole and ask how from the loins of one man there could spring in so short a time so great a progeny.â

In the 21st century, Genghis Khan has been the focus of celebratory exhibitions in New York, Los Angeles, Philadelphia, San Jose and Kansas City, etc. In Raleigh, heâs described as âan innovative leader and statesman who brought unity, stability and religious tolerance to most of Asia and parts of Europe.â In Bozeman, MT (pop. 49,000), museum goers were invited to discover âthe real life of one of the worldâs greatest civilizersâthe man who gave the West passports, pants, paper money, forks, and much more.â

Youâve got to step back and see the big picture, eh, not reduce a civilizing immortal to a blood drinking ogre who made Beijing streets âgreasy with the fat of the slain,â according to an eyewitness, or a demon who led âan immense horde of that detestable race of Satan,â to quote Matthew Paris, a 13th century English monk.

As Genghis Khan becomes a god again on his home turf, another historical giant has been knocked down with dizzying speed, and Thomas Jefferson is even denounced at the University of Virginia, which he didnât just found, but lovingly designed.

Among his many accomplishments, Jefferson was the father of the American college campus, but from these sheltered villages of learning, sophomoric mobs are now howling for his scalp!

Jefferson kept over 600 slaves during his lifetime, theyâll tell you, and he had black boys as young as ten-years-old whipped, when they couldnât pound out nails fast enough for his business. Jefferson separated slave families, sometimes as punishment, but more often just to make a buck.

During his life, Jefferson published only one book, Notes on the State of Virginia. In it, he stated that blacks naturally smelled bad, had weird or bad taste, lacked foresights, couldnât convey abstract thoughts, and were incapable of poetry or art. Their attraction towards women was basically just lust, âThey are more ardent after their female: but love seems with them to be more an eager desire, than a tender delicate mixture of sentiment and sensation.â Only in music were blacks superior to whites, for they had âaccurate ears for tune and time.â

Jefferson concluded, âI advance it therefore as a suspicion only, that the blacks, whether originally a distinct race, or made distinct by time and circumstances, are inferior to the whites in the endowments both of body and mind,â so it was only a suspicion, and Jefferson didnât know if such inferiority was rooted in biology, history or the environment.

Notes on the State of Virginia was published in 1785. In a 1791 letter to Benjamin Banneker, a black astronomer and mathematician, Jefferson wrote, ââNo body wishes more than I do to see such proofs as you exhibit, that nature has given to our black brethren, talents equal to those of the other colors of men, and that the appearance of a want of them is owing merely to the degraded condition of their existence, both in Africa and America.ââ Jeffersonâs thinking evolved.

For some context into racial attitudes way back then, consider the following passage:

Another characteristic fact in reference to the Negroes is Slavery. Negroes are enslaved by Europeans and sold to America. Bad as this may be, their lot in their own land is even worse, since there a slavery quite as absolute exists; for it is the essential principle of slavery, that man has not yet attained a consciousness of his freedom, and consequently sinks down to a mere Thingâan object of no value. Among the Negroes moral sentiments are quite weak, or more strictly speaking, non-existent. Parents sell their children, and conversely children their parents, as either has the opportunity. Through the pervading influence of slavery all those bonds of moral regard which we cherish towards each other disappear, and it does not occur to the Negro mind to expect from others what we are enabled to claim. The polygamy of the Negroes has frequently for its object the having many children, to be sold, every one of them, into slavery; and very often naive complaints on this score are heard, as for instance in the case of a Negro in London, who lamented that he was now quite a poor man because he had already sold all his relations.

Blacks, this author asserted, have no moral sense, love for their parents or children, or even any conception of freedom for themselves. Worse than an animal, theyâre just things. Published in 1837, itâs Hegelâs Lectures on the Philosophy of History.

As for child labor and its abuses, consider that white English boys as young as four-years-old were forced to be chimney sweepers. A William Blake poem of 1789 begins:

Breathing in soot, many of these kids died from lung diseases, or just falling down chimneys. Humans have often been barbaric, and still are.

As much as anyone in history, Thomas Jefferson inspired and challenged us all to rise or fight our way out of such savagery. With unprecedented clarity and poetry, he insisted that freedom is our natural, God-given state.

No man should be judged by his worst moments, but in totality, and in a man of genius, he should be celebrated at his most transcendent.

In 1962, 49 Nobel Prize winners were invited to a White House dinner. Kennedy greeted them, âI think this is the most extraordinary collection of talent, of human knowledge, that has ever been gathered together at the White House, with the possible exception of when Thomas Jefferson dined alone. Someone once said that Thomas Jefferson was a gentleman of 32 who could calculate an eclipse, survey an estate, tie an artery, plan an edifice, try a cause, break a horse, and dance the minuet.â

As Mongols embrace their founding father, Americans denounce theirs, so who do you think have a brighter future?

It is past midnight in Busan. It is July 4th. It is dark here, but it is much darker in the land of Jefferson. Still, happy birthday.