Busan on May 23rd, 2020
◄►Bookmark◄❌►▲ ▼Toggle AllToC▲▼Add to LibraryRemove from Library • BShow CommentNext New CommentNext New ReplyRead More
ReplyAgree/Disagree/Etc. More... This Commenter This Thread Hide Thread Display All Comments
AgreeDisagreeThanksLOLTroll
These buttons register your public Agreement, Disagreement, Thanks, LOL, or Troll with the selected comment. They are ONLY available to recent, frequent commenters who have saved their Name+Email using the 'Remember My Information' checkbox, and may also ONLY be used three times during any eight hour period.
Email Comment Ignore Commenter Follow Commenter
Search Text Case Sensitive  Exact Words  Include Comments
List of Bookmarks

Although the compulsion to travel is universal, nearly all of it is only done virtually, and Iâm not just talking about the internet, of course, but reading books, looking at photos, telling and hearing stories, or just thinking.

We canât stand to be confined to one miserable or paradisal spot while knowing everything else is out there, so even while sitting still, we must move, if only mentally, as our legs shake and our eyes dart nonstop.

Every country is huge, man. Gigantic! A small town is already infinite. Only our bodies and minds are tiny. 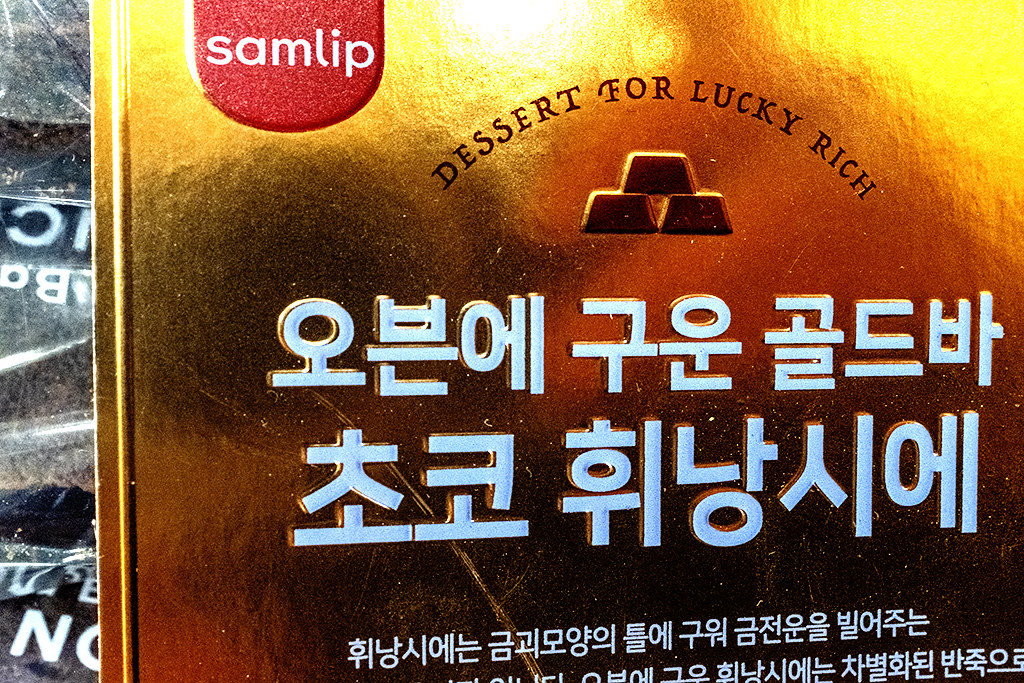 Again, Iâm sitting in Lotte Mart, drinking a cheap cup of coffee. How did I become so wealthy? Thereâs abundance everywhere I look, with everything manufactured, delivered and arranged, most tastefully, for me. (I got here on the Busan Subway, which had been laid out and maintained at great cost, also for me.) Within reach is a package that reads, âDESSERT FOR LUCKY RICH,â and nearby are so many varieties of rice, all cleanly husked and elegantly packaged. As for the people, everyone is so clean and nattily dressed, because they dare not startle or offend me. Had I stayed in my room, Iâd have denied myself all of this splendor.

On the subway, a middle-aged man in a well-worn black suit walked through two cars to address everyone, section by section, then heâd bow deeply, as if apologizing. Everyone ignored him. He wore glasses with thick, black frame. His chin jutted out. His chest was sunken.

On the platform of Seomyeon Station, a mannish womanâs jean jacket had a large, dark shape on her back, where a ridiculously glittery red heart had been.

Yesterday I was in Waegwan, a village of 34,000. I had glimpsed it just once from a passing train, and knew nothing about it. My hunch was amply rewarded. Right across the station, there was CafÃ© Plenty, with its tiny teddy bear clutching a cross, two small Rothkoesque paintings and a plant vase inscribed with âLOVE GROWS BEST IN LITTLE HOUSES.â The music was like Liberace paying tribute to Erik Satie.

The traditional market had these ornate, lacy gates that made me think of seaside arcades, but inside, the mood was subdued, for commerce was slow. I noticed a shutdown Vietnamese eatery, Hidden Corner Joint. When the coronavirus flared up in South Korea 3+ months ago, many Vietnamese fled home, thus starving these businesses. Iâve seen a bunch. 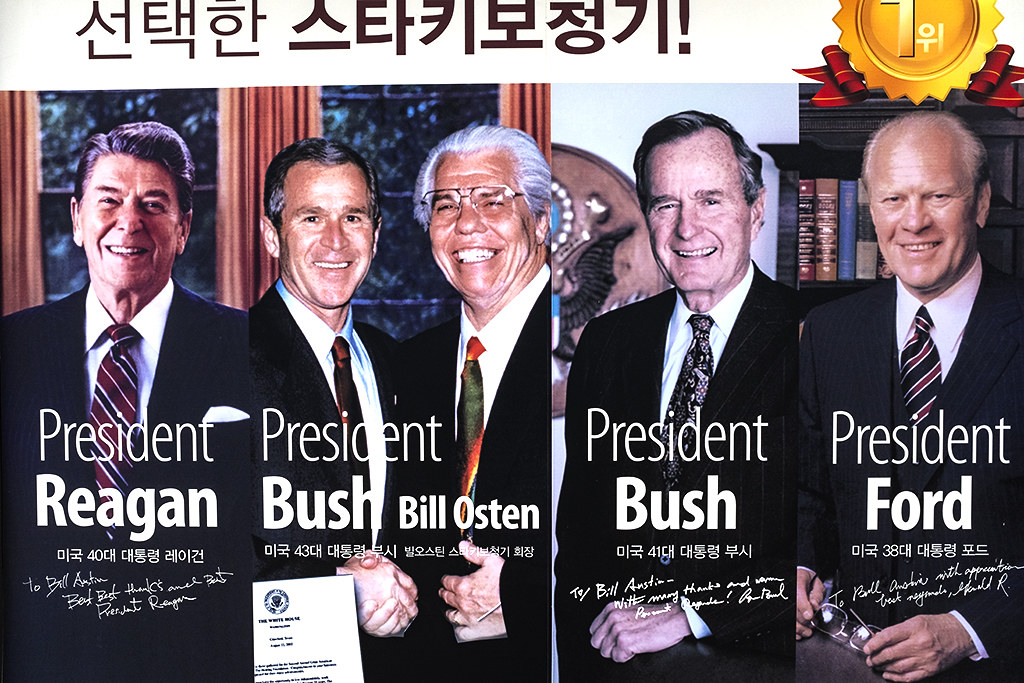 At a hearing aid business, thereâs a sign showing four US Presidents, all Republicans. Along with Ford, Reagan, Bush and Bush, there was also the CEO of Starkey Labs, Bill Austin, although his last name was misspelled as âOsten.â When itâs not your alphabet, words are just wiggly lines. Iâm only starting to figure out the Korean for s, a and ong, and Iâve learnt exactly two words, ânehâ for âyes,â and âmanduâ for âdumpling.â

In a foreign place, you can make the dumbest mistakes, so a couple times, Iâve picked up packets of tampons thinking theyâre facial tissues, but thatâs OK. Now that Iâm an expert on Korean tampons, I can unequivocally recommend NADA 101, for the name alone. Surely, itâs a riff on Dylanâs âItâs alright ma, Iâm only bleeding.â

As a minority, and soon-to-be undocumented worker, I should look into running for office under an anti-discrimination, social justice platform, for Iâve had it up to here, man, with all the microscopic aggression directed against me, day and night, by all 50 million Koreans! Smiling, some even attempt to speak to me in English, as if I donât understand their language, which is true enough, but thatâs not the point. Out of pure malice, theyâre only using English to waterboard me with their deeply inhumane accusation that I donât belong here! Just this afternoon, I walked by a woman who wore a black T-shirt with big white letters, aimed right at my face (mostly because I was looking at her boobs), âITâS TIME TO GO HOME.â

With all the dumplings Iâve eaten, Iâve contributed so much to the South Korean economy. Donât Koreans realize I built their, I mean our, country?

In Busan, most whites I see are Russians, so when I spotted a white in Waegwan, I thought maybe he was Russian, then I saw six blacks, four women and two men, marching into the train station. 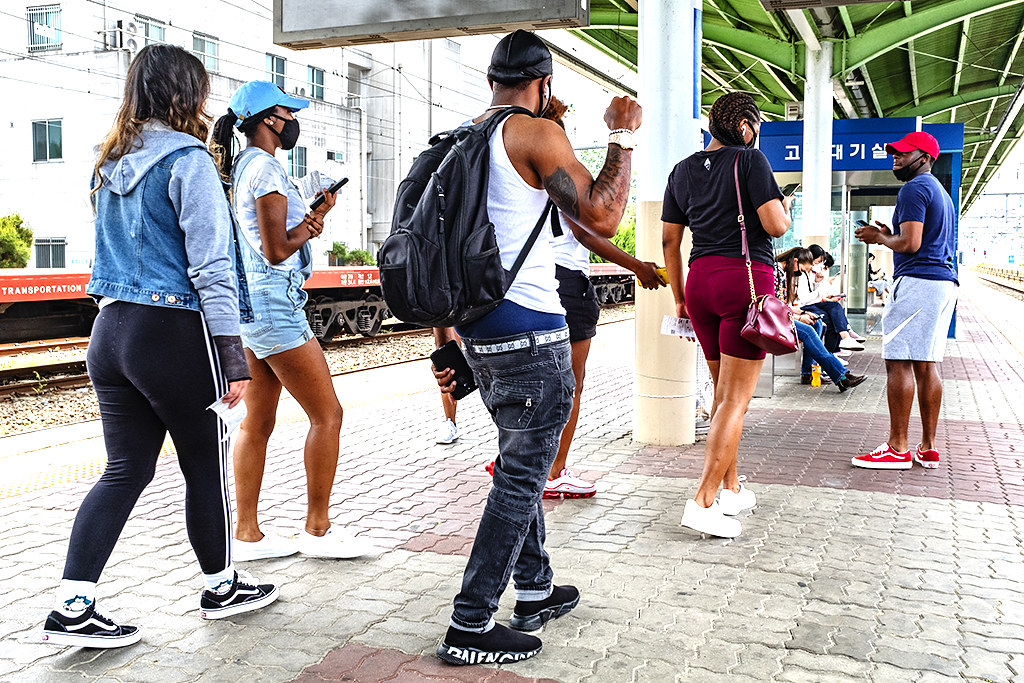 Iâve been in South Korea for three months, and just about every day, Iâd walk miles and take the subway, train or bus all over, but only yesterday did I see sagging pants, showing underwear! Cultures are different in every way.

It turned out they were American soldiers, among the 1,500 stationed at nearby Camp Carroll. They were going to the gigantic Shinsegae Shopping Mall in Dongdaegu. They donât get out much, apparently. When I overheard a woman say, âWeâre in car number one,â I realized they were standing at the wrong section of the platform, so I told them where to go.

(Since Korean trains tend to stop very briefly at each station, you better get on quickly. If you get on the wrong car, you might have to walk nearly the length of the train to get to your seat, a real pain in the ass.)

Back in Busan, I looked up Waegwan. During the Korean War, the US Army believed North Korean soldiers were among refugees trying to cross a bridge there, so it blew up this bridge, killing hundreds of people.

I also found out about Louâs Chi-Town, run by a real Chicagoan. Though they donât have Chicago hot dogs, whatâs wrong with you, Lou? I might have to run back to Waegwan, just to try Louâs cheesesteak. Mostly, though, I want to hear Louâs story.

Cattle chuted through iconic sights, the mass tourist comes home with photos, mostly of himself, to show that he has been to London, Paris, Amsterdam, Munich, Prague, Venice and Barcelona, etc., all in a week, but a cityâs highlights is its least authentic selves, for they are packaged for outsiders, and swarmed by them, while locals mostly stay away.

To experience a truer Paris, you should spend an afternoon in Belleville instead of around the Eiffel Tower, and since each city is already its greatest museum, you would gain more insights roaming randomly through Parisian streets than you could at the Louvre.

Since every city, town or village is its most complex, nuanced and stimulating book, you can never finish contemplating any of them, even the one youâve lived in forever.

Virginia Woolf agrees, âAs we step out of the house on a fine evening between four and six, we shed the self our friends know us by and become part of that vast republican army of anonymous trampers, whose society is so agreeable after the solitude of oneâs own room. For there we sit surrounded by objects which perpetually express the oddity of our own temperaments and enforce the memories of our own experience [â¦] But when the door shuts on us, all that vanishes. The shell-like covering which our souls have excreted to house themselves, to make for themselves a shape distinct from others, is broken, and there is left of all these wrinkles and roughnesses a central oyster of perceptiveness, an enormous eye.â

Iâve often spoken of peak travel, meaning never again could so many people zoom so freely across this earth, with some even fantasizing of rocketing beyond it. With the coronavirus, weâre suddenly grounded, but this would have happened anyway, soon enough. Our wobbly zeppelin economy was overdue for a crash. Having reached the peak of everything, we must brace for much turbulence on the way down.

Though the travel industry will recover some ground, peak roaming is toast. This doesnât mean we canât poke around here, there and everywhere, with our eyes wide open.

To travel any distance is to march into an infinity of fresh definitions, but much of this is lost if youâre moving too fast. Thatâs why itâs ideal to walk (or crawl even), for only then can you measure, sample and caress this earth with your body.

I finish this piece in Herryâs CafÃ©. Giving me my cappuccino, the pretty cashier bowed very deeply, as if I was some ancient sage. I do have white hair sprouting all over, especially from my nose.

Near my guesthouse, thereâs a fortune teller who has gotten the wise man look down to a T. Advertising himself as an âOriental Predictor,â he also sells statues of celestial beings and fabulous beasts. Since itâs nothing for him to pronounce how and when youâre going to get rich, have sex or die, I should pay him four measly bucks to meekly ask, âWise guy, please tell me when can I leave South Korea?â

There are no international flights from Busan, and very few from Seoul. Nearly each day, I check to see if any nearby country would let me in, but this is the only message Iâve encountered, âAll foreign passengers will not be allowed to enter or transit through.â In a flash, this vast earth went from being more open than ever before to shockingly shuttered.

âGrasshopper, youâre pretty much fucked,â the most honorable sage will tell me. âYou can stay here illegally and collect cardboard for a living, or you can fly back to the US, and share a room with your buddy, Chuck Orlovski. Heâs also garrulous and flatulent, so you two are a great match. Together, you can explore Nanticok, Shickshinny, Ransom and Koonsville, etc. Four more bucks if you want to hear how youâre going to die. It ainât pretty, but it never is. Timeâs up!â

Timeâs up for this article as well. Thereâs a great performance outside, so I must run out and see it, right this second. For my benefit, thousands of Koreans are acting just like Koreans. There is so much beauty and generosity, itâs astounding. Ciao! ← Coronavirus Missives from the US and Vi...Some Thoughts on the Coronavirus Mess a... →
Current Commenter
says:
Current Date at Time Now
Leave a Reply - Comments on articles more than two weeks old will be judged much more strictly on quality and tone
Cancel Reply
Commenting Disabled While in Translation Mode