Anticipating war, but elsewhere, of course, we casually say, âIâll get the popcorn,â but the death count for this coronavirus jazz is simply too low. Itâs just a bad flu season, many insist. Months into this pandemic, it still feels unreal. This is so boring. Maybe they can hire some of the millions suddenly unemployed to jiggle the coffins? Pop a few corpses out? 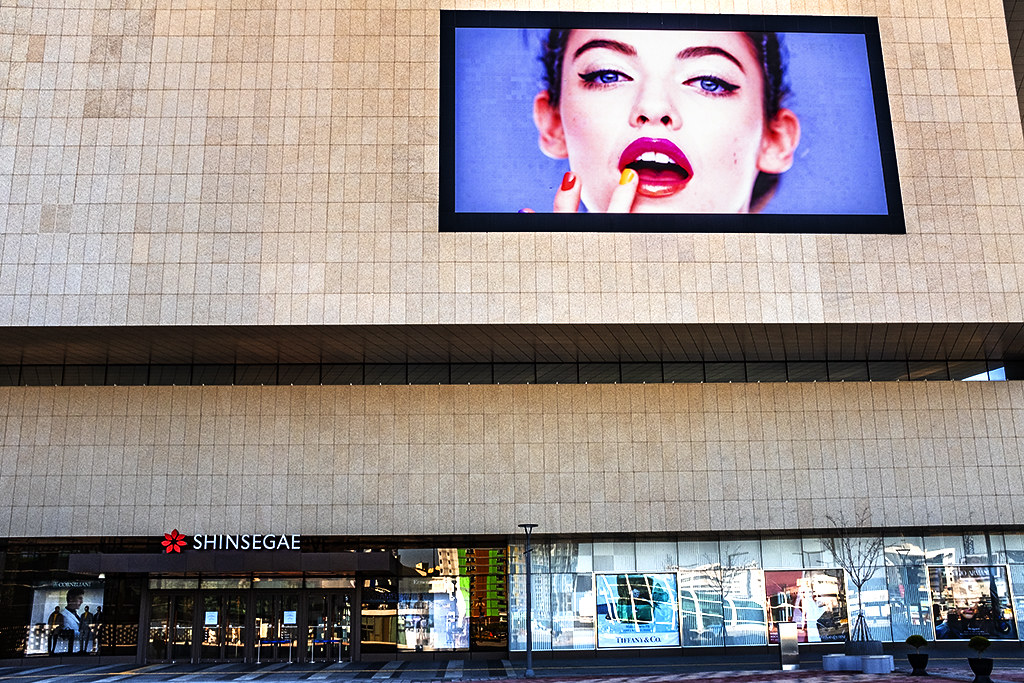 Iâm writing to you from South Korea, still. In Daegu, I entered Shinsegae, a pharaonic temple to ostentatious, brand-name consumption. What struck me was how hard everything looked, walls, stores, shoppers, with nothing blurry, mushy, messy or just incongruous allowed to seep from any unscripted crack or hole. There was no unzipped fly, metaphorically speaking. It was the opposite from a wet market.

But thatâs the whole thrust of this highfalutin modernism or postmodernism. No farts allowed! Not even the naturally aging ones. Thatâs why they must be quarantined. Even before this coronavirus crisis, entire categories of people were locked away, for their bodies were just not solid enough to be presentable. Twisted, mangled or practically decomposing, they ruin our appetite for Lolita or hunk hunting.

In âAmerica Arrested,â I talked about the American celebration of the open road, as in the seduction, challenge or imperative of running away from home, for thereâs a huge wonderland of a country out there, not to mention the world. But thereâs a flipside, and I donât just mean that most Americans donât get to run around much, what with an exhausting job or two, hardly any vacation time and barely any cash beyond the few bills in their pockets.

For decades, America has kept more people in solitary confinement than any other country, which is only inevitable, perhaps, for it institutionalized the concept in 1829, with the opening of the Eastern State Penitentiary in Philadelphia. Denying a prisoner all social contacts was meant to be good for him, for it forced him to contemplate. Penitent, he could regain his moral compass and become an upright and productive citizen. In reality, this cruel regime turned people psychotic.

Visiting this prison in 1842, Charles Dickens concluded, âIn its intention, I am well convinced that it is kind, humane, and meant for reformation; but I am persuaded that those who devised this system of Prison Discipline, and those benevolent gentlemen who carry it into execution, do not know what it is that they are doing. I believe that very few men are capable of estimating the immense amount of torture and agony which this dreadful punishment, prolonged for years, inflicts upon the sufferers; and in guessing at it myself, and in reasoning from what I have seen written upon their faces, and what to my certain knowledge they feel within, I am only the more convinced that there is a depth of terrible endurance in it which none but the sufferers themselves can fathom, and which no man has a right to inflict upon his fellow-creature. I hold this slow and daily tampering with the mysteries of the brain, to be immeasurably worse than any torture of the body: and because its ghastly signs and tokens are not so palpable to the eye and sense of touch as scars upon the flesh; because its wounds are not upon the surface, and it extorts few cries that human ears can hear; therefore I the more denounce it, as a secret punishment which slumbering humanity is not roused up to stay.â

If this was already known by the mid-19th century, then why has solitary confinement not been phased out, but actually expanded, so that the United States keeps roughly 100,000 people in that condition at any time? Simple, because it works! Their final solution, you see, is to straitjacket not just bodies, but minds.

To rule most effectively in these decaying United States of Drugged Serfs, a citizenâs movement and access to essentials, from food to information, must be strictly controlled, but you canât just drive a poor doofus batshit, or he might burn down the Hamptons.

To deflect his growing anger and frustration, you must hype up some bogeymen, which at the moment include China, the Chinese, Trump, the Democratic Party, Russians or even Mother Nature herself. Better yet, just let many of them think itâs the Second Coming, so the lockdown and discontinued paychecks are just bits of discomfort before the greatest rejoicing!

Though Jesus wonât show up for weeks, months, years, centuries, your serfs will at least have gotten conditioned to their increasingly strangled lives.

In 2010, the Rockefeller Foundation published âScenarios for the Future of Technology and International Development,â and one of four hypothetical futures is triggered by a pandemic. Dubbed âLock Step,â itâs âa world of tighter top-down government control and more authoritarian leadership, with limited innovation and growing citizen pushback.â

Whatâs imagined sounds remarkably like right now, âIn 2012, the pandemic that the world had been anticipating for years finally hit. Unlike 2009âs HlNl, this new influenza strainâoriginating from wild geeseâwas extremely virulent and deadly. Even the most pandemic-prepared nations were quickly overwhelmed when the virus streaked around the world, infecting nearly 20 percent of the global population and killing 8 million in just seven months, the majority of them healthy young adults. The pandemic also had a deadly effect on economies: international mobility of both people and goods screeched to a halt, debilitating industries like tourism and breaking global supply chains. Even locally, normally bustling shops and office buildings sat empty for months, devoid of both employees and customers.â

Without âofficial containment protocols,â âthe virus spread like wildfireâ through nearly all countries, but one is singled out for praise, âThe Chinese governmentâs quick imposition and enforcement of mandatory quarantine for all citizens, as well as its instant and near-hermetic sealing off of all borders, saved millions of lives, stopping the spread of the virus far earlier than in other countries and enabling a swifter post-pandemic recovery.â

Instead of healthy young adults, itâs mostly the very old and sick who are dying, and China is not being lauded, but demonized. Still, its anti-pandemic tactics are being imitated by countries worldwide, including the US, so whatâs going on here? Was this âScenarios for the Futureâ a prediction or script?

Sitting at a Busan cafÃ© in an underground shopping center, I see a thin yet steady flow of people. Across the way is a greasy spoon Iâll probably eat at later. Within sight is a shoe shop called âNEW ENGLAND,â donât ask me why, and a tarot card reader whoâs busy with a dowdy marm. Life is reasonably normal here.

After China, South Korea was hit hardest by the coronavirus, yet it never locked itself down. By comprehensively testing people, regularly disinfecting places, contact tracing and having nearly everyone wear a face mask while in public, it has managed to suffer only 211 deaths in 11 weeks. On just April 8th, 799 people died from it in New York State.

Why hasnât the Korean model been emulated worldwide, instead of Chinaâs much more restrictive measures? If you want to explore your totalitarian playbook, however, this is the perfect window.

Many Americans believe their government is using this crisis to preempt restlessness, riots or even revolution, for the American economic house of cards is overdue for collapse anyway, thanks to decades of mismanagement. With a rising China making Uncle Sam increasingly irrelevant and annoying, the US has to unleash this bioweapon to zap its nemesis and decouple from it. So what if a few shiploads of its own citizens keel over. Theyâre just useless eaters anyway.

In Dean Koontzâ 1981 novel, The Eyes of Darkness, thereâs this passage, âWuhan-400 is a perfect weapon. It afflicts only human beings. No other living creature can carry it. And like syphilis, Wuhan-400 canât survive outside a living human body for longer than a minute, which means it canât permanently contaminate objects or entire places the way anthrax and other virulent microorganisms can [â¦] Do you see the advantage of all this?â

During the Eurovision Finale in May of 2019, a corona-wearing Madonna is surrounded by gas masked, zombie like dancers as she sang, âNot everyone can come into the future / Not everyone thatâs here is gonna last.â At the end, they all fall over backward, out of sight, so that only the 61-year-old sex symbol remains, with rapper Quavo.

Maybe theyâre just cute coincidences, among many others, but donât you sometimes get the feeling weâre just being toyed with?

With our plastic, skyscraping project imploding, perhaps we can devolve into a breed thatâs simpler, muddier and gnarlier, less distracted so much saner, and more honest to those around us, since we canât escape them. Perhaps weâll become men again.

Or maybe not. Cowed by fear, oozing despair and dependent on those who have clearly betrayed us at each turn, weâll become even more catatonic in our cells. After lockdown, weâll stumble like blind fools, into this farce, again. ← Coronavirus Missives from the USA, Braz...Coronavirus Crisis as a Turning Point →
Current Commenter
says:
Current Date at Time Now
Leave a Reply - Commenters who are not discussing the article, but are only indulging in ad hominem attacks, will not be tolerated.
Cancel Reply
Commenting Disabled While in Translation Mode