Sidon, Lebanon, 2020
◄►Bookmark◄❌►▲ ▼Toggle AllToC▲▼Add to LibraryRemove from Library • BShow CommentNext New CommentNext New ReplyRead More
ReplyAgree/Disagree/Etc. More... This Commenter This Thread Hide Thread Display All Comments
AgreeDisagreeThanksLOLTroll
These buttons register your public Agreement, Disagreement, Thanks, LOL, or Troll with the selected comment. They are ONLY available to recent, frequent commenters who have saved their Name+Email using the 'Remember My Information' checkbox, and may also ONLY be used three times during any eight hour period.
Email Comment Ignore Commenter Follow Commenter
Search Text Case Sensitive  Exact Words  Include Comments
List of Bookmarks

From this elevated village, you can see the ocean on clear days. So close, itâs only three hours away by foot. For millennia, traders passed by that ridge, right there, on their journey from Sidon to Damascus. 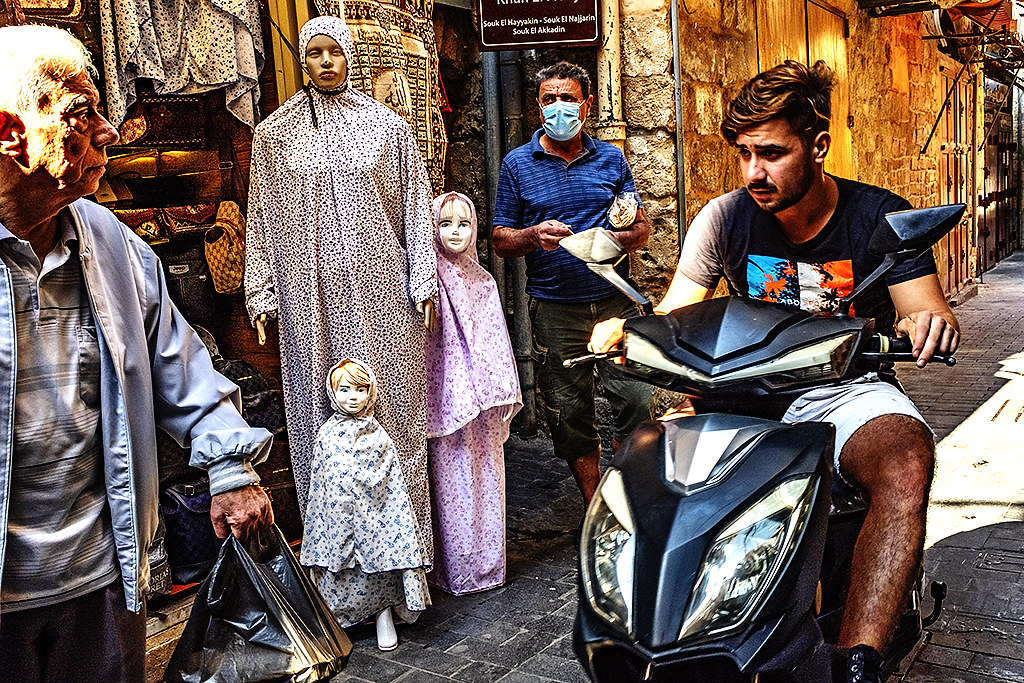 Sidonâs souq is gloriously intact. Once entered, itâs impossible to not get lost for hours, and maybe even permanently. I wouldnât be surprised to hear that citizens of every country have been swallowed by this ancient warren, but donât worry, theyâre fine, if not home. Itâs an Italo Calvinoâs kind of a maze.

The souqâs winding passages often darken and shrink to accommodate only wide-eyed shorties. Wandering past, over and under centuries-old stone blocks, you are cushily embraced by the mother of all wombs or tombs, history itself.

Under multiple arches, a brightly hijabed woman steps into sunlight. Two girls, one in pajamas, stand on tiptoes to peek inside a 17th century mosqueâs barred window. With so much bending over, women shouldnât pray near men, it is reasoned. 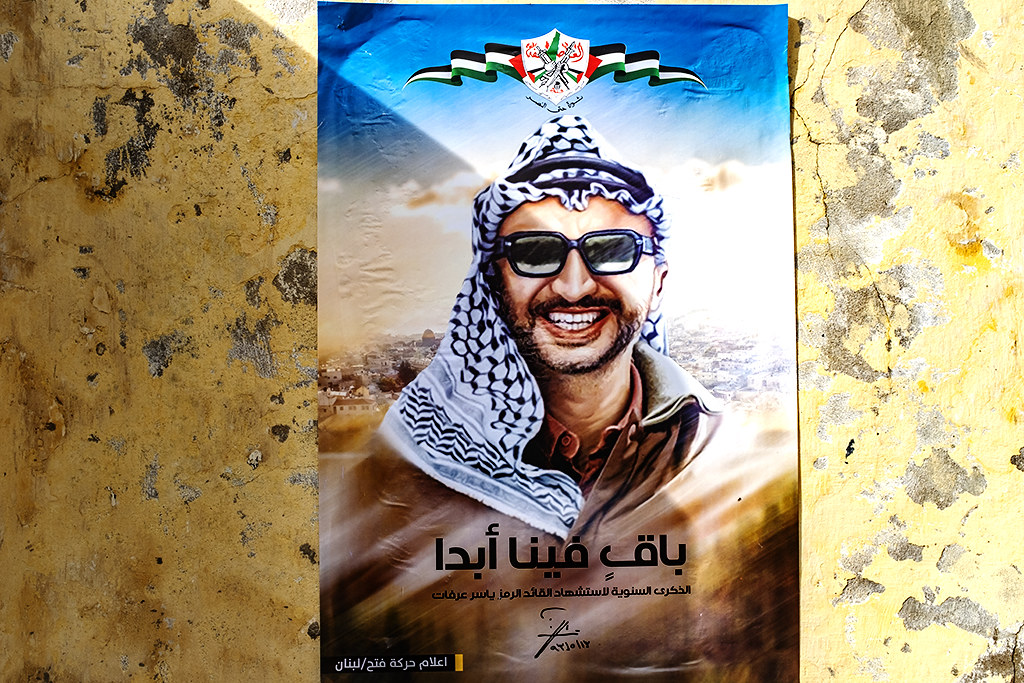 Images of a smiling Yasser Arafat, often young and movie-star dashing, dot this souq. For all his missteps and ultimate failure, Arafat is an enduring symbol of Palestinian resistance to Jews, so heâs reverently displayed on many Sidon walls, fridges and coolers.

Lest you think Sidon is all historical and picturesque, I should stress that much of it is banal, modern and even crass. There are two McDonaldâs, a Burger King, a Hardeeâs, a KFC and a Popeyeâs Fried Chicken. At the last, I learnt that âThe Trinityâ is no eternal mystery but merely âa Cajun combination of bell pepper, celery and onion [â¦] used in Popeyeâs gravy, gumbo and jambalaya.â 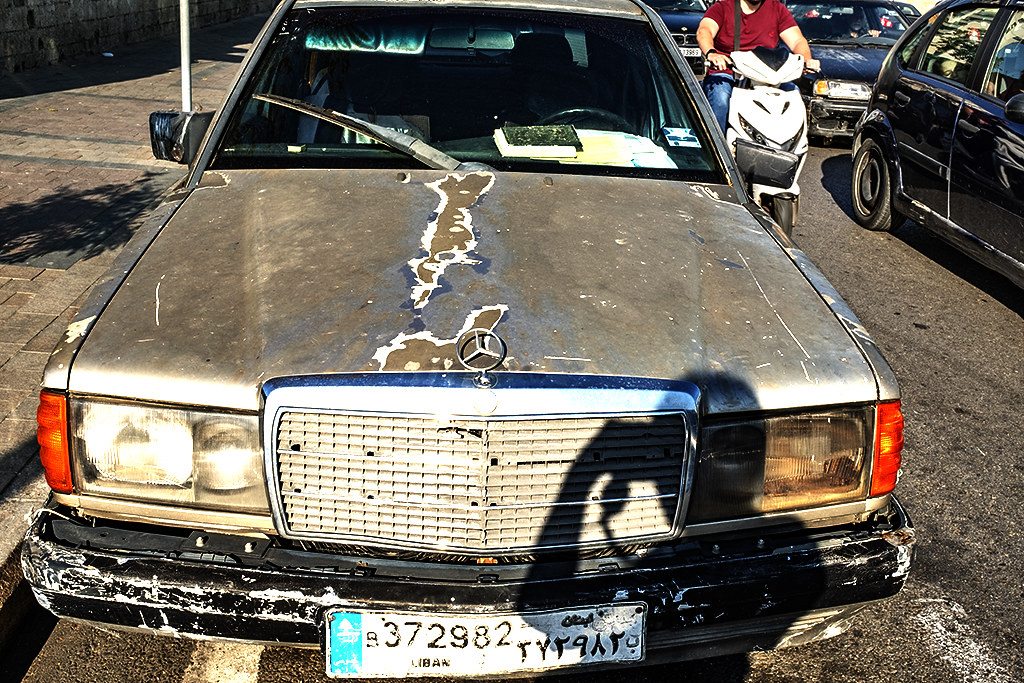 There are more Mercedes Benzes in Lebanon than just about anywhere else, but theyâre not gleaming and spiffy. Decades-old, some are just puttied and duct-taped junks over stubbornly functioning engines.

After three weeks in southern Lebanon, Iâve only walked through Sidon twice. Al hamdullilah, I am a country boy, if only temporarily.

Tonight, thereâs a wedding in the next village, on the opposite hill. Canât you hear the tabla, tambourine, flute and violin? Open your window to let that communal, surging joy flush away your misery and bitterness. Notice how nearly all their houses are dark? The entire village is at that wedding, naturally.

In their lurid and sequined abayas, girls on high heels will totter home to change outfits all evening long, so they can reappear, again and again, even more beautiful. Weddings are about the only occasions where maidens can showcase themselves to potential suitors. The young men, too, are resplendent.

(Yes, Iâm way too klutzy for the dabke. Tripping over myself, Iâd drag the whole line down. With my arms and legs flailing, Iâd kick both bride and groom.)

Old enough, surely you remember the Saturday night dances in all these villages? They were canceled by the war and havenât returned. Alcohol in public places disappeared, too. Personally, I think itâs a shame.

Not everything is lost. Thereâs still poetry, though more often, itâs declaimed on television and not at a village cafe. At least thereâs no Snoop Doggy Dogg blaring from passing cars.

Itâs quiet here. Now and then, there are gunshots, but itâs only a hunter, targeting birds. A few times daily, Jewish jets may thunder above the clouds. Stray dogs in heat bark before dawn, and as pale light washes over the sky, the first prayer call wakes and soothes us all.

This morning, we also hear the muezzin announcing a neighbor has just died. Diagnosed with stomach cancer just a month ago, Aleyna was only forty-years-old. Yesterday, she sounded and looked perfectly fine, but such is life. She never married.

In case youâre wondering why women are banned from this villageâs funerals, itâs because they had the jarring habit of tearing their clothes off before hurling themselves into the burial pit. Enough, it was sensibly decided. When the deceased is safely interred, women can wail away at the grave.

With running water and washing machines, women are getting soft, we can agree. Only half a century ago, they had no problem walking half a mile down the hill to fetch water from the well, then trudge back up, with a heavy jar on their head, their back military straight, lips smiling, with barely a grunt escaping. When itâs time to give birth, they just squat.

Water is a painful subject around here. After Jews stole the Golan Heights, they diverted much of its water to themselves, thus crippling scores of Arab villages in Lebanon, Jordan and Syria.

In Occupied Palestine, Jews have destroyed hundreds of thousands of Palestinian olive trees. Palestinians harvesting olives are shot at by Jews with impunity. Jews wreck goyimâs livelihood and heritage, when not uprooting or slaughtering them. Honed on genocide, they canât help it. Just look out your window.

Three weeks in Lebanon and Iâve already been to Beirut more times than half the people in this village. Consider Soheil, for example. With a wife and five children, this 36-year-old gardener has seven mouths to feed daily, so why would he go anywhere? Heâs visited Beirut maybe twice.

A woman of roughly the same age was hired to clean an apartment in Beirut, so she went there for the first time. Coming and going, she looked but didnât say much. Was there anything she wanted to see? The airport, she mousily answered, so fine, she was driven there. Seeing airplanes landing, taking off or just parked was so delightful, she was even emboldened afterwards to ask for music on the car radio.

Though Iâve spoken often of being grounded, they simply are, so whoâs better equipped moving forward? Whoâs more content? Do you have a village to speak of? Do you want one?

Like me, your next village may be your first, if you can reach it.

Founded by Phoenicians, Sidon has been ruled by Persians, Greeks, Romans, Turks, Egyptians, Syrians, Arabs and Frenchmen. After a 47-day siege in 1110, it was conquered by Crusaders, with King Sigurd of Norway leading the sea assault. Even Mongols showed up in 1260 to sack it, on their way to Gaza.

Sidonâs treasures have mostly been burnt, shattered, pulverized or carted off, with the Eshmunazar II Sarcophagus squirreled in the Louvre, and the Alexander Sarcophagus sitting in Istanbul.

Although Crusaders controlled Sidon for over a century, all thatâs left of their presence is a broken castle, jutting into the sea, and here and there, a freckled face with brownish or red hair.

As the latest invaders of this region, Jews, too, will fade away. ← Lebanese SnippetsNext Month in Jerusalem! →
Current Commenter
says:
Current Date at Time Now
Leave a Reply - Commenters who are not discussing the article, but are only indulging in ad hominem attacks, will not be tolerated.
Cancel Reply
Commenting Disabled While in Translation Mode