Baby ritualistically abandoned, Saigon, 2018
◄►Bookmark◄❌►▲ ▼Toggle AllToC▲▼Add to LibraryRemove from Library • BShow CommentNext New CommentNext New ReplyRead More
ReplyAgree/Disagree/Etc. More... This Commenter This Thread Hide Thread Display All Comments
AgreeDisagreeThanksLOLTroll
These buttons register your public Agreement, Disagreement, Thanks, LOL, or Troll with the selected comment. They are ONLY available to recent, frequent commenters who have saved their Name+Email using the 'Remember My Information' checkbox, and may also ONLY be used three times during any eight hour period.
Ignore Commenter Follow Commenter
Search Text Case Sensitive  Exact Words  Include Comments
List of Bookmarks 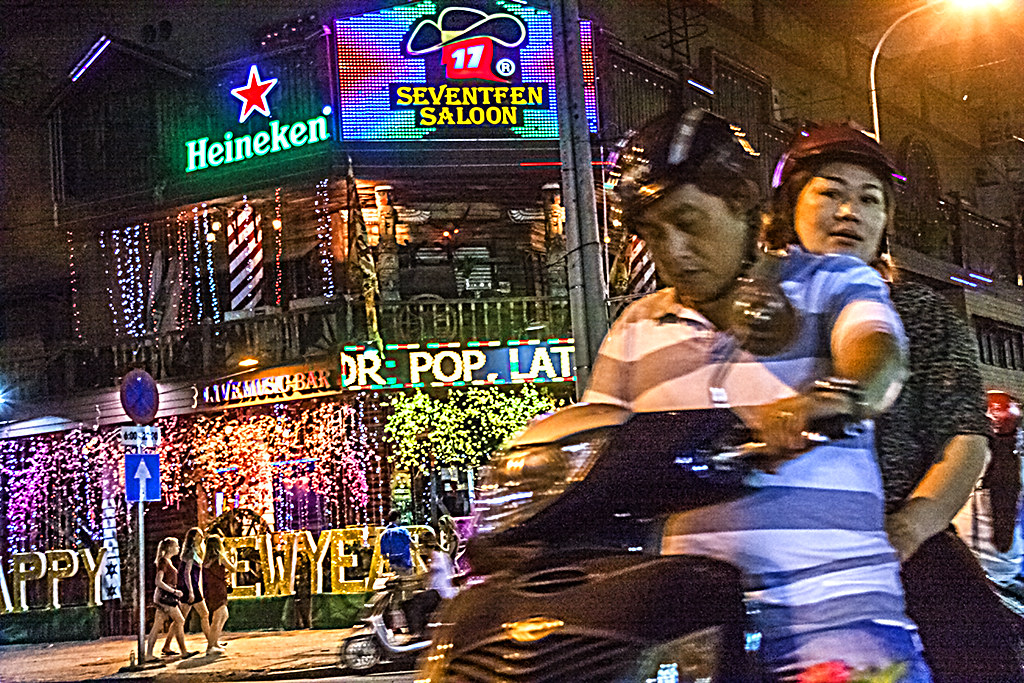 In Saigon, the foreign tourists stay mostly downtown, where they can patronize American bars, and restaurants serving Indian, Thai, Korean, Italian, Mexican and Middle Eastern food, not to mention McDonaldâs, Burger King, Kentucky Fried Chicken, Popeyes, Starbucks and Lotteria, the last a Japanese chain. With English as the lingua franca, they can be overseas, yet somewhat at home, and with their smart phones, they can be anchored further in the familiar. Once, traveling meant having virtually no news from home, and no choice but to be immersed in the alien. How many still remember picking up an International Herald Tribune to find out, say, if the Phillies won three days ago?

The salad bowl or cultural mosaic of downtown Saigon is, in fact, quite generic, for it echoes that which can be found all over the world. Far from celebrating differences, multiculturalism blunts distinctivenesses, for cultures tame, tint and distort each other when abutting. During French rule, Vietnamese stopped lacquering their teeth black, started wearing Western clothing, so now, the traditional head wears and tunics are rarely seen, especially on men. In Germany, many school cafeterias have removed pork dishes since their growing population of Muslim students canât eat them. Putenwurst, anyone?

For two weeks in Saigon, I only went downtown twice, so saw almost no one of another race or even ethnic group, so almost no one who was unfamiliar with the infinity of Vietnamese traditions, habits and tics that make up this nation.

Most mornings, I was awakened by cockcrows, for Vietnamese keep chickens everywhere, even in army barracks and factories. I learnt to identity the sounds of two nearby roosters. For five days straight, however, I was also roused from bed, before seven always, by musicians entertaining funeral guests down the street. Sometimes, it was the funky sounds of Mekong Delta blues, or ânháº¡c tÃ i tá»­,â with a supremely evil guitarist jamming away. Other times, it was a horn band, with two trumpets and two saxophones, that sounded like Nola, Motown or Sun Ra, or just plain schmaltzy. They also employed a guy who could balance a motorcycle on his head and shove a long steel rod up his nose. This is no way to send off the dead, you may think, but itâs perfectly normal in Vietnam, and all out in the open, for the entire neighborhood to see.

Another day, an eight-month-old baby was placed in a basket then ritualistically abandoned in an alley. Immediately found by a relative, he was brought home, where his new (old) family gushed, âOh, what an adorable and sweet baby! Heâs so easy to take care of! Thatâs why weâre adopting him!â The reason for this skit? The kid had been spitting out milk during feeding times.

Imagine either of the above scenarios taking place in Cupertino or Leipzig.

Being among your kind means thereâs no need to explain a cultural or historical reference, where nothing is exotic, where conversations are subtle and freely allusive, where humor is constant and deft, where you never have to apologize for just being, but there are also niceties to observe and taboos to avoid, obligations that are ungraspable to nearly all outsiders.

Itâs rare to find a man whoâs equally at home in two cultures, much less several, but itâs an alluring myth, as testified by the popularity of the Dos Equis ads featuring âThe Most Interesting Man in the World.â A suave and world-wearied middle-aged man golfs with bushmen in the African savanna, emerges from an Inuitâs fishing hole, bowls expertly in a Pakistani cricket match, jokes with locals while riding atop an Indian train, walks on hot coals while carrying a woman in the South Pacific, plays handball in Harlem, soaks with macaques in a Japanese hot spring. âHe never says something tastes like chicken, not even chicken.â âHe can speak French, in Russian.â âWhen in Rome, they do as he does.â âLocals ask him for directions.â Never out of his element, this impossible character is a globalist icon.

In reality, the vast majority of men canât even order coffee in a second language, and would feel out of place in a strange bar, much less a foreign country, and thatâs fine, for it has always been this way.

Not even war could chase millions of Vietnamese out of the country. Only Communism, a deeply alien ideology, managed to do so, but now that the Party has eased up on its dogmas, many Vietnamese are returning.

Those who have never been to the US, however, still harbor many fantasies about it, for American movies and music videos are hypnotically seductive. Even as it kills and commits suicide, the US tirelessly projects images of boundless wealth, virility and sexiness. Producing next to nothing, it sells dreams. 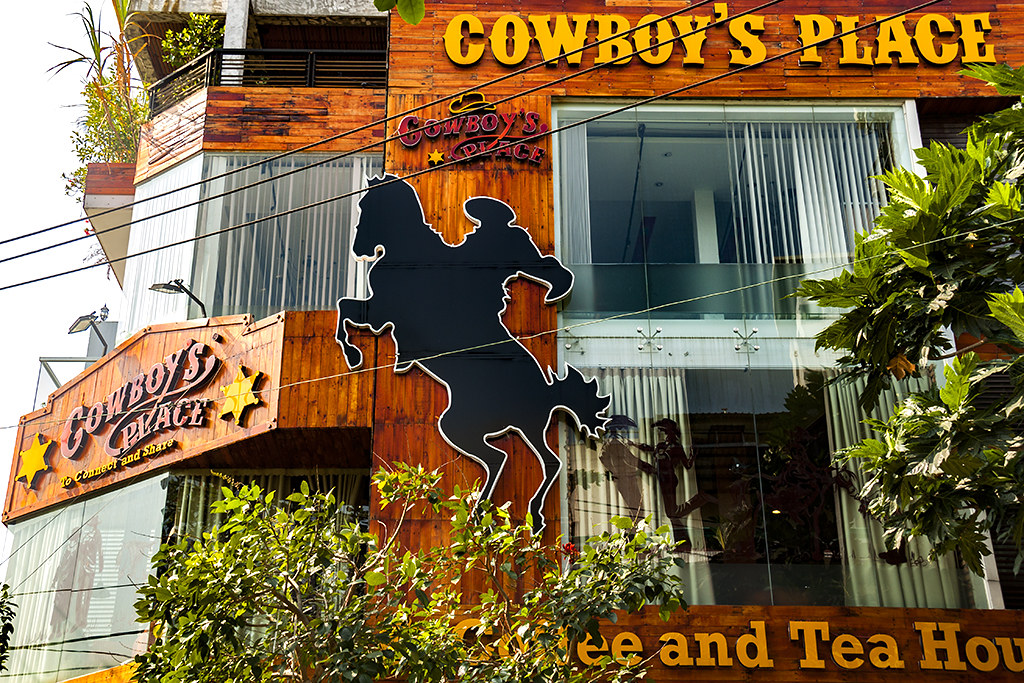 Oh, exotic America! A mile from me, thereâs a cafÃ© called Cowboysâ Place, with a slogan in English, âCowboy Up Your Life.â Its logo is a mean-assed sheriff with two Colt 45âs. What it offers, though, are lassis, matchas, yogurt shakes, Italian sodas, fresh juices and assorted queer, fruity concoctions. Itâs clear that neither its owners or clientele have thought too much about the cowboy concept. It doesnât matter. Cowboys are American, thus cool, and thatâs enough of a selling point, apparently.

At a Lotteria, thereâs this mangled evocation of America on a wall:

redneck bikers munching sliders look to the past for better riders stars and stripes and girls in stetsons cows in buns and boys in we sterns rock then roll for big check pay days mountain rang estenlane freeways this land is our land but once was their land the untamed food of gold rush miners the beef, the fries the roadside diners, oh say can you see from the nation of night its gift to the world

Itâs like Whitman shredded, digested and pooped out. As the country implodes, its spastic myth still lights up the sky.

More sobering tales are filtering back, however. I heard one manicurist, for example, tell of witnessing the rioting in Ferguson, then being robbed at gunpoint three years later, then sued by an overweight customer who sort of fell inside his store.

A people can endure any travails if they still have a common culture and history. With these snuffed out, thereâs no nation left to save. Just ask yourself, Who have the means and desire to hollow out America? What are their final aims?

Will 2020 See the Emergence of a Nationalist Left?
Andrew Joyce
• 211 Comments • Reply
← Tet Offensives, Hungry China and Dumbed...Rolling Into Cambodia →
Hide 116 CommentsLeave a Comment
"A Common Culture Makes the Nation"
• 116 Comments
Commenters to Ignore
Commenters to ignore (one per line)

← Tet Offensives, Hungry China and Dumbed...Rolling Into Cambodia →
Current Commenter
says:
Current Date at Time Now
Leave a Reply - Commenters who are not discussing the article, but are only indulging in ad hominem attacks, will not be tolerated.
Cancel Reply
Commenting Disabled While in Translation Mode