Matthew Ehret and I covered 30 stories on this weekâs False Flag Weekly News. Fortunately, the one below did not make the list.

If you appreciate the way FFWN combs through each weekâs news stories in hopes of separating fact from fiction, absurd reality from barely-more-absurd parody, then by all means contribute to this weekâs Fundrazr. 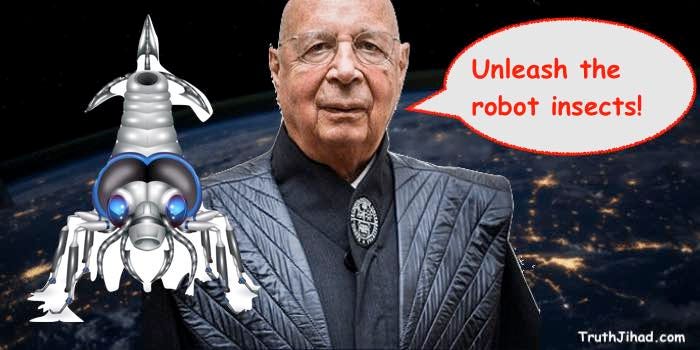 The World Economic Forum has withdrawn its demand that people start eating bugs.

Klaus Schlob, chair of the WEF’s Dietary Dystopias Committee, called a press conference in Davos yesterday to formally repudiate an earlier WEF communiquÃ© headlined “You Will Eat Bugs and Be Happy.” That document had argued that traditional sources of protein such as meat, dairy, eggs, fish, beans, and nuts are unsustainable and should be abandoned in favor of insect-based protein alternatives including MaggotMeat(TM), cockroach chips, spider spaghetti, lice cream, anty pasto, and other tasty bits of “grub.”

“The trouble with real insects,” Schlob explained, “is that they’re just too ‘natural.’ The whole point of the Great Reset is to force human beings to transcend the natural world by becoming entirely unnatural. That’s why we advocate for such unnatural behaviors as eating unnatural foods, unleashing unnatural viruses, injecting ourselves with unnatural MRNA concoctions, andâmy personal favoriteâcommitting unnatural acts with the most unnatural people I can find.”

Instead of naturally-occurring insects, Schlob insisted, people should eat synthetic bugs. “We now have the technology to create artificial life in the form of robot insects that devour all sources of energy they can wrap their greedy little e-mandibles around,” Schlob explained. “Turn them loose and they’ll gobble up the plants, the grass, the trees, the animals…pretty much anything that can be converted to energy fueling the production of even more robot insects. Think how abundant they will be! Think how many of them there will be to eat! We will never run out of them! It’s the ultimate in sustainability! Best of all, after they ingest the entire natural world and fly off into space looking for more worlds to devour, we will be left with a nice, clean, 100% artificial planet without any messy natural anything to stand in the way of our mad dream of transcendence through technology. So…unleash the robot insects!”