Credit: Wikimedia Commons/Tasnim News Agency
◄►Bookmark◄❌►▲ ▼Toggle AllToC▲▼Add to LibraryRemove from Library • BShow CommentNext New CommentNext New ReplyRead More
ReplyAgree/Disagree/Etc. More... This Commenter This Thread Hide Thread Display All Comments
AgreeDisagreeThanksLOLTroll
These buttons register your public Agreement, Disagreement, Thanks, LOL, or Troll with the selected comment. They are ONLY available to recent, frequent commenters who have saved their Name+Email using the 'Remember My Information' checkbox, and may also ONLY be used three times during any eight hour period.
Ignore Commenter Follow Commenter
Search Text Case Sensitive  Exact Words  Include Comments
List of Bookmarks

During the past few decades an intellectual movement has arisen out of the ruins of what once passed for Western civilization. As the great narrative of secular humanism, materialism, and progress collapsedâits obituary was published by Lyotard as The Postmodern Conditionâan odd constellation of nationalist and traditionalist thinking began shaking the foundations of Western intellectual and political life. The Trump regime in America, Brexit in the UK, the Yellow Vests in France, and the loosely associated right-wing parties across Europe espousing what The Saker calls âNational Zionismâ are all symptoms.

The healthy side of these movements, most visible in the Yellow Vest protests, opposes the Zionist-dominated Western central banking cartel that some call the New World Order. Many of the new nationalists do not want to be subsumed into a Rothschild-dominated one-world corporate oligarchy (much less a Zionist dystopia ruled by Antichrist from a blood sacrifice temple built on the ruins of the al-Aqsa Mosque). Instead, they seek a world of autonomous, fully-sovereign nation-states. In their various visions of the post-NWO paradise they seek, each tends to privilege his own nation, even though most give lip service to the ideal of multipolar pluralism.

But the easiest way to unite a nation, as Carl Schmitt taught, is to unite its people in hatred of a common enemy. So the new nationalists need a scapegoat. Jews, globalists, and especially Islam and Muslims fit the bill. Since Jews and globalists are extremely powerful in the West, while Muslims are powerlessâand permanently demonized by the 9/11 mind-control operationâonly a minority of New Right thinkers and activists has the courage and intellect to avoid falling into the Islamophobic trap set by the Zionists.

One of those rare courageous and brilliant individuals, and the most important thinker of the European New Right, is Russian political philosopher Alexander Dugin, founder of Eurasianism. Though one can argue, as Arash Najaf-Zadeh and Charles Upton do, that Duginâs anti-metaphysics is a confused mishmash, Muslims ought to appreciate and support much of the Eurasianist project nonetheless. Duginâs movement, whatever its metaphysical shortcomings, is currently the most viable international effort to defend a space for Godâand for sovereign individuals and communitiesâin a world of decaying but still hegemonic neoliberal secularism.

I met Alexander Dugin at the May 2018 New Horizon Conference in Mashhad, Iran. My presentation mentioned RenÃ© Guenon (1886-1951), the founder of Traditionalism. Guenon, who dabbled in freemasonry as a young man, discovered that esotericism is essentially satanic, that real gnosis can only be found in traditional religionâand that the best-preserved religious tradition is Islam. Guenonâs insight that the Westâs salvation lay in Islam was more than a century ahead of its time.

After my talk, Alexander Dugin approached me and said he, too, had been heavily influenced by Guenonâs work. We discussed the intersection of Traditionalism and Eurasianism, and parted vowing to continue the conversation. 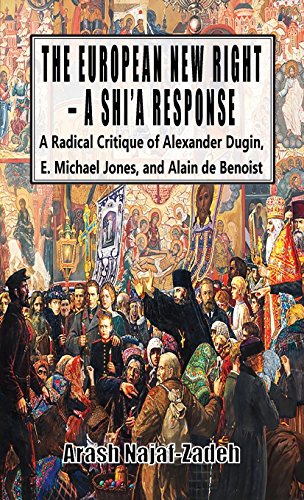 I agree with Najef-Zadeh and Upton that Duginâs anti-metaphysics seems either wrong, self-contradictory, impossible to understandâ¦or at least impossible for me to understand. And it obviously is not Islamic. It strikes me more as a kind of intoxicated political poetry than a rigorous philosophy. But it is stirring political poetry nonetheless. And it aims at arousing opposition to the hegemonic neoliberal Antichrist: the Atlanticist powers governed by the Empire of Usury. That would-be unipolar empire is unapologetic about its desire for total world domination. And it is equally upfront about its plan to eliminate religion except as a private lifestyle choice, and to usurp the sovereignty of individuals and communities. So just as the Prophet Muhammad, peace upon him, entered into various kinds of alliances with people who were not nominal Muslims, indeed whose understanding of metaphysical issues would have been very different from his own, so today those of us striving for God in a world with a growing God-shaped hole ought to make alliances with forces that can help us maintain and expand the space where God can be worshipped, and where God-centered societies can be founded and expanded. Duginâs Eurasianism would seem to fit the bill. 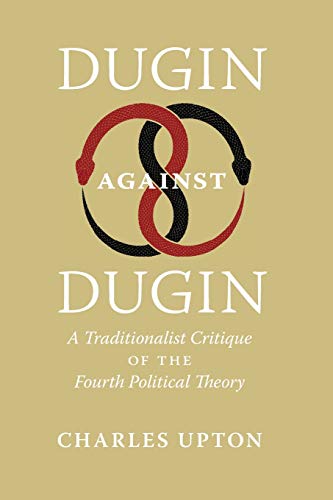 One problem noted by Charles Upton is Duginâs apparent openness to various currents that seem hostile to God in general and Islam in particular. In Uptonâs understanding, Dugin seems to be saying that he would make common cause with the Devil himself if thatâs what it took to defeat Antichristâa stance that brings to mind Nietzscheâs aphorism “He who fights monsters should see to it that he himself does not become a monster. And if you gaze for long into an abyss, the abyss gazes also into you.”

Duginâs perhaps overly-pluralistic coalition may include forces that most Muslims would not want as permanent allies. The Islamophobic new right in Europe, led by such National Zionist flunkies and phonies as Tommy Robinson, Marine Le Pen, Viktor Orban, the AfD party in Germany, and so on, might or might not claim Dugin as one of their spiritual and intellectual godfathers. And then there are the neopagan and even satanic groups that boast some sort of inspiration or affiliation with Eurasianism. 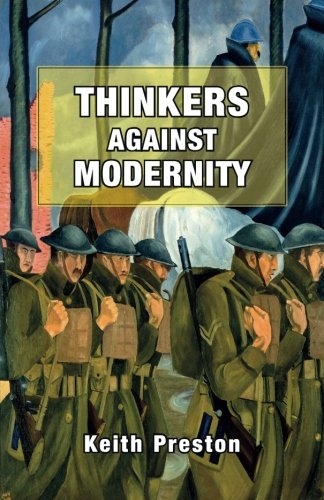 These groups emerge from a misunderstanding of, or deviation from, Guenonâs original Islamic Traditionalism. Rather than following Guenon along the straight path of Islam, the only well-preserved and viable authentic religious tradition, many anti-modernist thinkers wandered off into astounding varieties of idolatrous confusion. The notable anarchist writer Keith Preston has provided us with a useful synopsis of the intellectual careers of many of these folks, who together constitute the key influences on the European New Right. They include Ernst Junger, Carl Schmitt, Friedrich Nietzsche, Hilaire Belloc, G.K. Chesterton, Julius Evola, Aleister Crowley, Corneliu Codreanu, and Alain De Benoist. Junger and Codreanu worshipped the idol of war; Schmitt the idol of politics; Nietzsche the superman; and worst of all, Evola and Crowley the pagan deities (jinn) if not Satan himself. Only the Catholics Belloc and Chesterton, and the critic of empire De Benoist, are people most God-focused thinkers would feel comfortable with.

Another and more positive manifestation of the European New Right (or is it the new left?) is the gilets jaunes or Yellow Vest movement that is laying the groundwork for another French Revolution. Like the Occupy Movement in the USA, the Yellow Vests at least have the decency to demonize real demonsânamely, the international bankers, whose Empire of Usury is the enemy of decent and God-fearing people everywhere. But also like Occupy, the Yellow Vests have a better understanding of what they are fighting against than what they are fighting for. 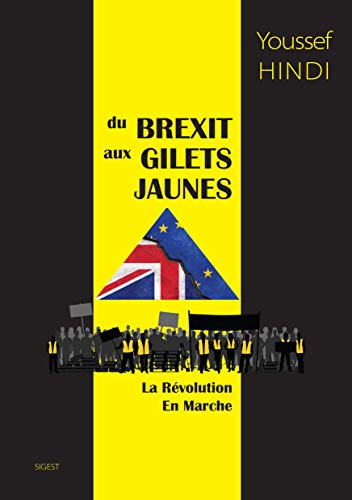 Youssef Hindi, a brilliant young Muslim intellectual from a French-Moroccan background, has published a notable new meditation on the Yellow Vest movement: Du Brexit aux Gilets Jaunes: La RÃ©volution en marche (From Brexit to the Yellow Vests: The Revolution Underway). Unlike most observers, Hindi saw it coming. His book is one of the best analyses of the accelerating French crisis, which is not just about economics and wealth distribution, but stems from a collapse of legitimacy and sovereignty. According to Hindi, the underlying cause of the crisis is Franceâs lack of a unifying religion or ideology. Under such inherently unstable conditions, the rapacious and unprincipled oligarchyâs attempt to foist a pseudo-religion of sham democracy on the people has failed. In an effort to cover its failure and prop up the whole collapsing edifice, the oligarchy has resorted to ever-more-brutal police state repression (whose pretext is false flag terror)âa vicious cycle that only accelerates the delegitimation process. Hindi argues that the best outcome, the complete overthrow of the current neoliberal elite, would also overturn the global geopolitical order by taking France out of US/Israel-dominated NATO and its lapdog EU and turning the new Europe of genuinely sovereign nations towards Eurasia.

Such a development would represent a victory for Alexander Duginâs project. But are nations, with their man-made laws and idolized leaders, viable entities in the long term? Doesnât ultimate sovereignty belong to God? Isnât the only law worthy of the name Godâs law? Those of us who think so should already be planning for a future crisis that will undermine the multipolar world of resurgent nationalisms that Dugin seeks to establish. Those peoples who can overcome their egotistical tendencies toward idolatrous nationalisms, and instead work to establish multi-national polities under the ultimate sovereignty of God alone, will provide the solution to that crisis, and enable the creation of more just, viable, and sustainable social and political systems that harmonize with God-given human nature.