The New York Times is going a lot easier on Sam Bankman-Fried than it did on Bernie Madoff. As of this writing, theyâre still hyping a Nov. 30 event headlining SBF alongside Zelensky, Zuckerberg, and Yellen. 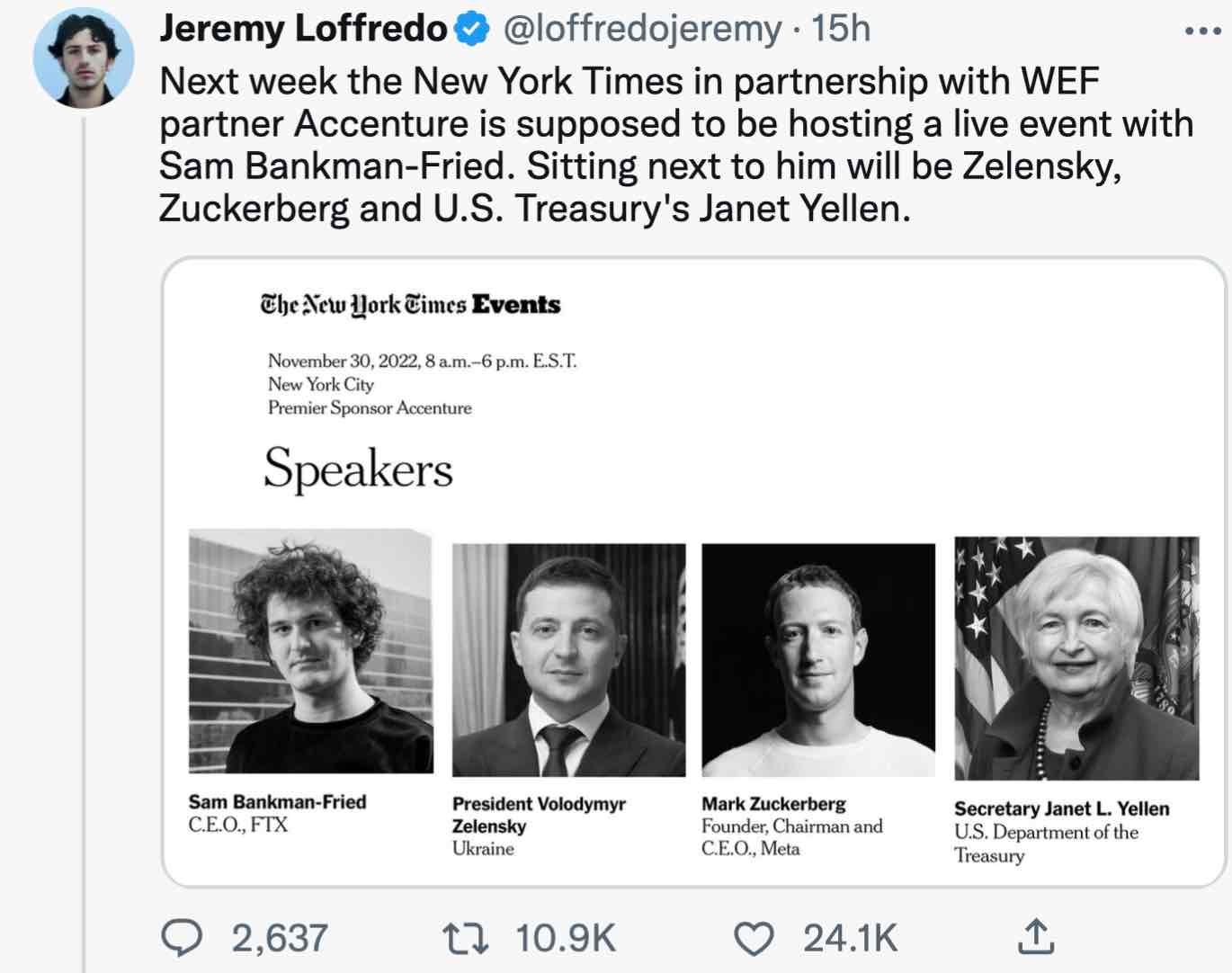 Why be nice to SBF and mean to Madoff? Maybe because Madoff made off mostly with the money of his fellow Jews, while Bankman-Fried is an equal-opportunity absconder. But since I myself am an equal-opportunity conspiracy theorist, as opposed to a merely anti-Semitic one, Iâm obliged to wonder whether there might be a connection between the âcollapseâ (or was it controlled demolition) of Bankman-Friedâs crypto empire, and the suspicious death of Nikolai Mushegian on October 28.

Mushegian, a leading crypto pioneer and founder of Dai, tweeted on October 27 that the âCIA and Mossad and pedo elite are running some kind of sex trafficking entrapment blackmail ring out of Puerto Rico and Caribbean islandsâ and that âthey are going to frame me with a laptop planted by my ex gf [girlfriend] who was a spy. They will torture me to death.â The next day he washed up on Condado Beach.

CIA and Mossad and pedo elite are running some kind of sex trafficking entrapment blackmail ring out of Puerto Rico and caribbean islands. They are going to frame me with a laptop planted by my ex gf who was a spy. They will torture me to death.

Mushegian had been sounding paranoid for at least a couple of months.

3 possible futures for me 1) suicided by CIA 2) CIA brain damage slave asset 3) worst nightmare of people who fucked with me up until now, I am sure these are the only options

What was that about? Only Allah and the people with the right security clearances know for sure. The innocent explanation is that Mushegian went nuts and drowned himself, after tweeting anti-CIA diatribes, in order to trick people like me into writing articles like this. (You got me, Nik!)

But crypto visionaries like Nikolai Mushegian have reasons to be paranoid. They know that their goalâreplacing central banking with a fully-decentralized currency systemâmakes them the mortal enemies of the most powerful people on Earth. Additionally, the crypto world, where huge sums of difficult-to-trace âdigital cashâ are floating around, often with minimal-to-nonexistent security, smells like an oil-spill-sized pool of blood to the oceansfull of sharks swimming around out there.

Some say the central bankers are the biggest sharks, while the black-ops and mafia types they employ are the medium-size ones. Any way you slice it, sharks of all sizes have plenty of motivation to take big bytes out of crypto. Whether the biggest sharks intend to kill crypto, or just cripple and control it, itâs obvious that people like Mushegianâself-styled crypto pirate warriors intent on sinking the central banking armadaâknow what kind of ocean theyâre sailing in.

So for the sake of argument, letâs entertain the possibility that Mushegianâs âparanoidâ tweets were reality-based, and that central banking sharks did indeed send him to a watery grave. (Yes, I know the authorities dragged him out of the water and buried him on land, which is more than they allegedly did for Osama Bin Laden, but Iâm trying to wax poetic here.)

If we step back and consider the broader implications, it would seem that Mushegianâs murder, if thatâs what it was, would have been part of a larger effort to rein in crypto. A âsex trafficking entrapment blackmail ring run out of Puerto Rico and the Caribbean Islandsâ tasked with getting its hooks into key crypto people might plausibly be part of the same effort.

And so might the controlled demolition of FTX. Just days after the immolation of FTX-Alemeda, government hearings on âthe pressing need to regulate cryptoâ were held in the UK and scheduled in the US. If you were one of the central bankers that own the US and UK governments, the spectacle of FTX imploding at free-fall acceleration might be just the shock-and-awe event you needed to prod governments to regulate the crypto sector and integrate it into the legacy currency system under the auspices of said banksters.

Was Sam Bankman-Fried a Patsy?

You would think a 30-year-old self-made billionaire would have to be a pretty smart, savvy, reality-based guy. But according to the best investigative article on the FTX-Alemeda implosion, Bankman-Fried was a half-bright amphetamine addict who spent most of his work time, as well as his free time, playing video games that he never got very good at. While itâs always possible that young Sam was one of those rare geniuses who can do amazing work with an amphetamine monkey on his back, like Sartre or Philip K. Dick, the vast majority of speed freaks are burned-out wrecks, totally incapable of doing a decent job mowing the lawn, much less earning billions of dollars gaming crypto algorithms. And milky eggs is pretty sure Bankman-Fried was no genius:

â¦his personal blog, Measuring Shadows, is incredibly dullã¼it is a compendium of overly long posts about effective altruism, moral philosophy, and baseball statistics. In comparison, Caroline Ellisonâs blog is far superior, demonstrating a level of thoughtfulness and wit that surpasses SBF by many leaguesâ¦

â¦While this may initially seem like a frivolous observation, it is actually shocking that SBF was unable to rank higher than the Bronze or Silver league (at League of Legends video game) after years of regular play across hundreds if not thousands of individual games. It is reflective of an incredibly impaired level of cognition, much like someone who was unable to learn how to ride a bicycle after an entire month of practice or someone who never progresses past the level of an average elementary school student after five yearsâ of daily piano practice.

Wait a minute! Bankman-Fried studied physics at MIT! What happened?

It is not clear, but one could speculate that excessive drug usage may have literally âfried his brainâ to some extent.

It certainly could have. SBF wasnât just gobbling pills, he was literally patching the stuff into his bloodstream. And he didnât even bother to hide his habit. 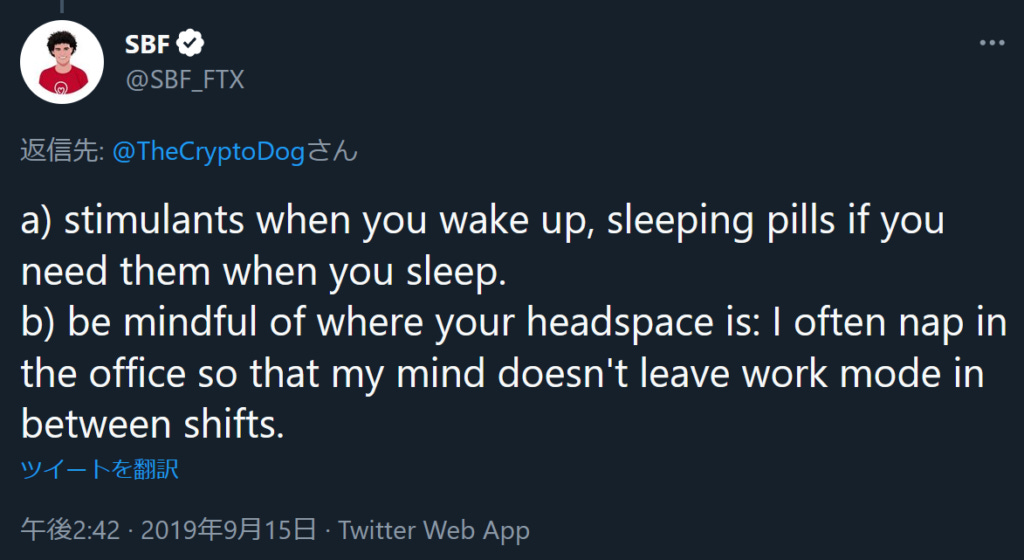 Like the âparanoidâ Nikolai Mushegian, Sam Bankman-Fried-on-Amphetamines might have gotten strung-out and imploded on his own. But itâs also possible that just as Mushegian could have had help washing up on the beach, Bankman-Friedâs meteoric rise and fall was guided, or at least nudged, by a hidden hand.

The Richest Man in the World
Larry Romanoff
• 483 Comments • Reply