RFK Jr. called it âan act of child abuse on a massive scale.â Thursdayâs CDC decision to add COVID mRNA vaccines to the childhood schedule was certainly abusive. But it could be argued that it wasnât just child abuse, but also an avatar of the ancient ritual of child sacrifice.

Before diving deeper into the human sacrifice angle, letâs clarify what just happened: Children are being injected with a potentially dangerous substance that brings them essentially no health benefits whatsoever.

COVID mRNA vaccines are still classified as experimental. That means the CDC is trying to force American children to participate in a scientific experimentâa blatant violation of the Nuremburg Code.

The ostensible justification for forcing entire populations to participate in medical experiments is the âemergencyâ of the COVID pandemic. MRNA vaccines are only permitted under an Emergency Use Authorization. But not only is the emergency phase of the pandemic obviously over, there never was any childrenâs health emergency to begin with. A Nature Medicine study using the British National Health Service National Child Mortality Data Base found that the COVID mortality rate in children is .0002%, or approximately two in a million. And of that vanishingly small number of deaths, three-quarters involved chronic health conditions, two-thirds had multiple co-morbidities, and 60% had life-limiting conditions.

So why on earth would anyone mRNA-vaccinate their child? Presumably for the same reason that elders deliberately devastated American childrenâs educational and emotional-psychological development by closing schools and forcing children as young as two years to wear masks: They believe the damage to childrenâs health and well-being is worth it (just as Madeleine Albright thought murdering half a million Iraqi children was worth it) because by abusing the children âwe are saving grandmaâ (and to a lesser extent teachers, parents, and other adults).* 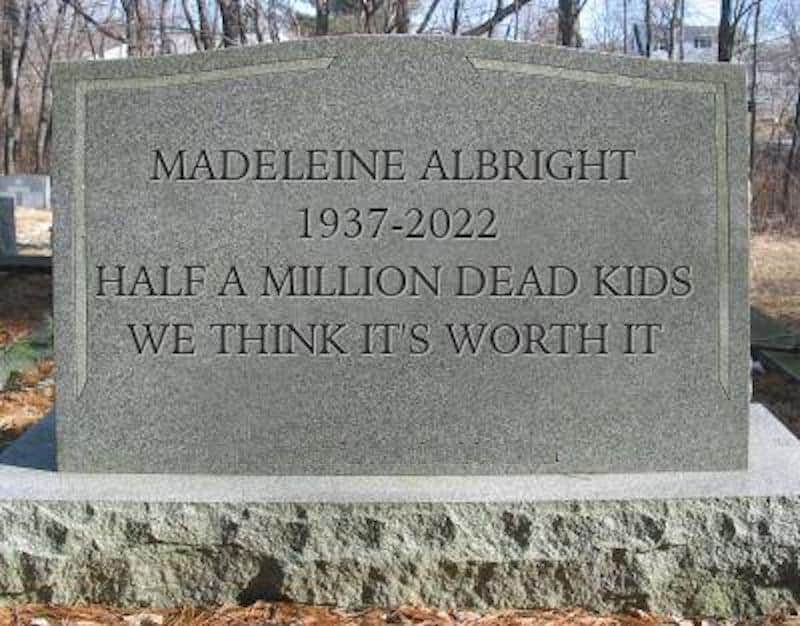 Madeleine Albrightâs enthusiastic approval of the murder of half a million children, like Americaâs deliberate devastation of its children during and after the COVID pandemic, appears at first glance to be an oversight. Surely Albright cannot have meant that! Certainly Americans wouldnât intentionally inflict debilitating handicaps and dangerous experiments on their own kids!

It depends what you mean by words like âdeliberatelyâ and âintentionally.â Poets and storytellers have always known what Freud claimed to have discovered in the late 19th century: Much human motivation is unconscious, especially when it involves the darker, atavistic aspects of our psyches.

With that in mind, letâs consider the possibility that something is driving Americans to sacrifice their young. Evidence for that thesis abounds: Not just the way kids have been thrown to the COVID Moloch, but also: 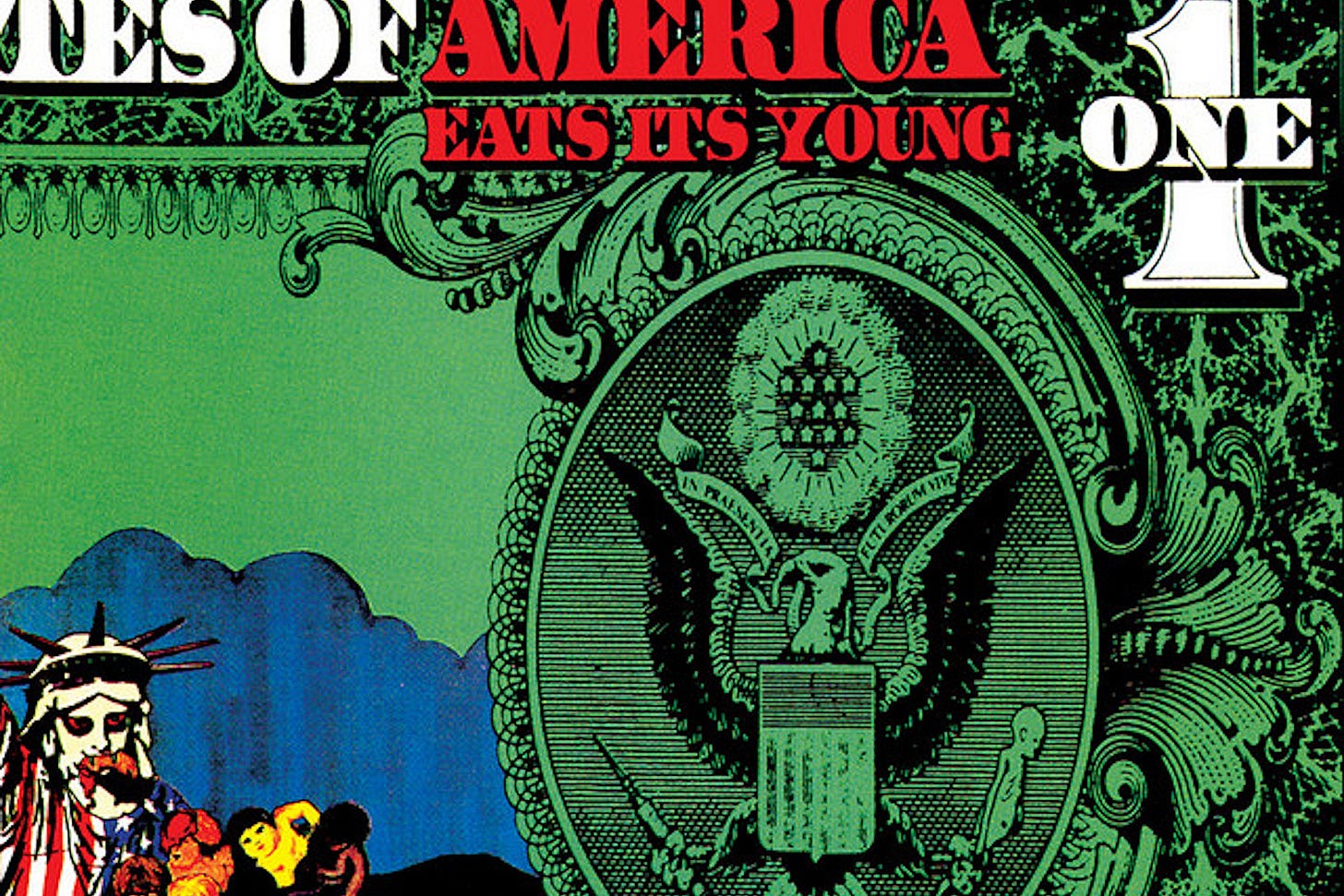 But how is that âsacrificeâ? Where does Moloch come in? To answer those questions, we need to review the seminal work of anthropologist-philosopher RenÃ© Girard, who argued that all cultures are grounded in human sacrifice. As Stanford News noted in its November 2015 obituary:

âGirard was interested in the causes of conflict and violence and the role of imitation in human behavior. Our desires, he wrote, are not our own; we want what others want. These duplicated desires lead to rivalry and violence. He argued that human conflict was not caused by our differences, but rather by our sameness. Individuals and societies offload blame and culpability onto an outsider, a scapegoat, whose elimination reconciles antagonists and restores unity.â

The scapegoat onto which blame is offloaded is typically a powerless, marginalized individual or community. The scapegoatâs innocence, paradoxically, may make them even more of a target: Think of the virgins thrown to volcanos, or the blameless goat laden with the communityâs sins and driven into the wilderness. And who is more innocent, powerless, and marginalized than childen? No wonder children are the preferred victims of so many sacrificial societies, from the Moloch-worshipping Canaanites, to the pre-colonial Ibo described in Chinua Achebeâs Things Fall Apart, to the satanic cultists of Americaâs power elite who gather at places like Bohemian Grove (and, some believe, certain Washington DC restaurants).

Girardâs notion of sacrifice was a momentous intellectual breakthrough in the human sciences. But it misses two important aspects of the phenomenon, what we might call the pragmatic and the spiritual dimensions of sacrifice. Pragmatically, there have been times and places in the course of human history when sacrificing certain people just seemed like the sensible and realistic thing to do. It happens all the time, in military affairs, to this day. And it has happened in non-military contexts quite regularly among widely diverse peoples. Among the nomadic Khoi-San of Africa, when elders became an intolerable burden, or the food supply wouldnât support the current crop of babies, the non-productive elders or youngers were simply killed. In pre-Islamic Arabia, baby girls were regularly buried alive, which limited the population in a hostile environment, and rectified the male-female ratio in a culture where men typically died young from incessant raiding and feuding. Today, as the global population is expanding toward eight billion, perhaps there is a subliminal feeling among the masses, and a fully-conscious awareness among elites, that every new child makes the terrifying population-resources equation a little bit worse.

And then there is the all-important spiritual dimension. Our spiritual state is largely determined by our capacity to sacrifice the self (especially its base desires) for the Other (both human and divine). Those who succeed most magnificently in this sacrifice or surrender (islam) of the lower self become prophets/saints/mystics, while those who fail most spectacularly by sacrificing the Other to the self rather than the other way around become monstrous egotists, sybarites, and power-hungry greedheads, narcissists, and sociopaths.

Americans, many of them anyway, once immolated their egos for something bigger than themselves. A concrete expression of that spiritual state was the way they sacrificed themselves for their children, working hard at unpleasant low-status jobs so their childrensâ lives could be better. This was genuinely done for the children, not for the parentsâ ego-satisfaction.

Today, some upwardly-striving middle- and upper-middle class Americans do seem to make extraordinary sacrifices for their children by hiring them tutors, chauffering them to soccer practice, and trying every trick in the book and then some to get their kids admitted to high-status universities. But none of this is really about the kids. Itâs about the parentsâ egos. They want to be able to brag about âmy son the Harvard studentâ or âmy daughter the doctor.â This narcissistic aspect of American culture in general and parenting in particular has accelerated in the era of social media, when peopleâs overweening concern with their image and perceived status seems to dominate the national conversation.

If you need more proof that America is sacrificing its children, just look at the economic statistics. Young married people with children have been getting a shrinking slice of the national pie for decades, while pre-boomer and now boomer retirees and other older non-parents and post-parents hoard the proverbial lionâs share of the wealth. All sorts of frivolous luxury goods and services proliferate, mostly servicing older wealthier folks, while one in seven children live in poverty, housing becomes increasingly unaffordable, and most young parents need two incomes to stay afloatâdepriving their children of the parental care they would enjoy in a one-income two-parent family.

So spiritually, we are in a decadent, narcissistic phase, a steep downturn in the graph of civilizational rises and falls; and pragmatically, we sense that children, at such a bleak and precarious historical moment, are not such a good thing. The result is a culture capable of choosing leaders who tell us to line our children up and inject them with dangerous experimental compounds for no apparent reason. And if it turns out, as some evidence suggests (see HERE, HERE, and HERE) that the real purpose of MRNA COVID vaccines is to damage fertility and thereby prevent the birth of children, the enormous scope of that monstrously mendacious erasure of the unborn could conceivably echo down through the generations and supplant Madeleine Albrightâs as the biggest mass child sacrifice in human history.

Will parents rebel against this new ritual of technocratic child sacrifice? By rejecting the MRNA vaccines and joining the wave of school board rebellions against the transhumanist technocratsâ war on humanity in general and children in particular, will American parents not only save their children, but their civilization as well?

*Yes, I know the COVID vaccines arenât effective against transmission, so the people who think vaccinating their kids will save grandma are wrong. But still, that is what they think.