Judgments about the wisdom of the German government giving effective citizenship to over a million Syrians (more correctly people from the Muslim world who say that they are Syrians) should be informed by looking at the achievements of Turks in Germany. They began immigrating to Germany in October 1961, by invitation, to join the labour force, providing workers for the German economic miracle. By now, 56 years after the first wave of immigration, they should have integrated into the fatherland.

Since Germany does not officially categorise people by ethnicity, population estimates are approximate only, but there are now roughly 4 million Turks in Germany. In 2012 the figure for Middle East/North Africa was given as 3.8 million, virtually all of them Arabic. Presumably that will now be over 5 million. Since Turks and Syrians are close genetic neighbours, one can look ahead in time to see how well the Syrians will do by seeing how second generation Turks are doing now.

In terms of their PISA scores, not very well. Turkish children are better than first generation immigrants, but not enormously so, and certainly not at ethnic German standards.

Here are some results from: 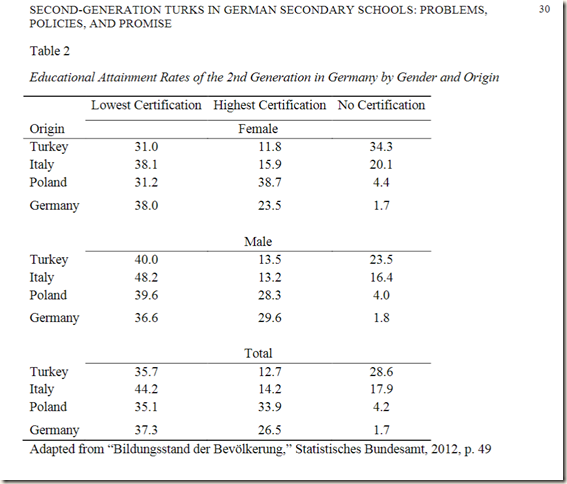 Progress has not been good with immigrants as a whole.

In general, Second generation immigrants are only fractionally better than their First generation parents, and very far below the mean for ethnic Germans. If a foreign born immigrant marries a German, then it would appear that the âgapâ is immediately reduced, and the resulting children are closer to the German norm, as would be expected on a genetic basis.

Needful to say, the author makes no reference to intelligence, or racial differences in intelligence. There are several references to the need for increased âsupportâ. This has always been given, but more is always demanded.

The median IQ estimate for Turkey from the Lynn database is 89.

As usual, it would be good to have more intelligence test results, but these are rarely funded in less wealthy countries, hence the reliance on anything one can glean from scholastic attainment results.

Prof Heiner Rindermann is the âman to go toâ on this educational issue. He says:

I read in an interview with Petra Satanat, PISA Germany (www.spiegel.de/lebenundlernen/schule/pisa-studie-am-haertesten-trifft-es-die-migranten-a-521334.html), on PISA 2006 that, regarding only Turkish immigrants, the second generation students are better than the first generation students. But there were no numbers.

(I have looked at this in a rough translation, and the main point is that Turkish immigrants are two school years behind ethnic Germans. That way of putting it always makes people think that if they could only be given an extra two years at school, all would be well. Not so. This is an intelligence difference, and lower ability means a slower rate of learning, and less ability to generalize from instruction.)

The usual response to these sorts of results is to say that even more education should be offered to immigrants, particularly language teaching. In fact, the latter does not appear to be strongly related to scholastic attainments. It also leaves aside the question as to why other immigrants who initially do not know German do better than Turks.

Would the German government have been so keen to let in a million Syrians had they read the PISA results of second generation Turks? I would like to think that better understanding of these results might have had an impact. However, these high level policy matters are rarely based on factual considerations.

Prediction: 30 years from now people will be demanding more educational support for Syrian children in Germany.

The Lack of Progress in Science: Sex Differences
Razib Khan
• 98 Comments
← The Science of the SeasonsScientific Method Process Picture →
Hide 15 CommentsLeave a Comment
"Will Turks Show Syrians the Way in Germany?"
• 15 Comments
Commenters to Ignore
Commenters to ignore (one per line)

← The Science of the SeasonsScientific Method Process Picture →
Current Commenter
says:
Current Date at Time Now
Leave a Reply - Comments on articles more than two weeks old will be judged much more strictly on quality and tone
Cancel Reply