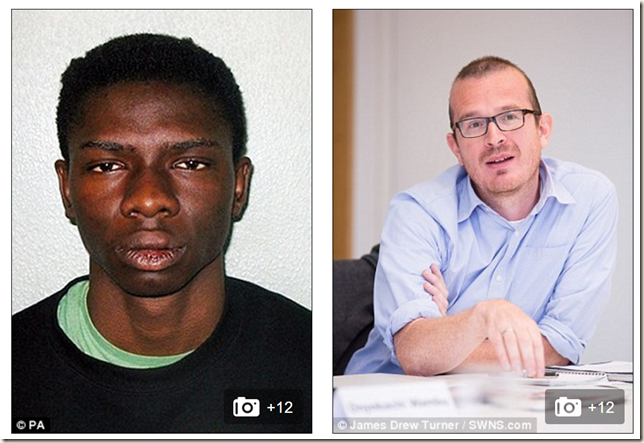 That is the striking headline in The Telegraph, with all the makings of a modern horror story.

The Guardian is more circumspect, but equally informative

Only a few weeks ago I was discussing the detection of violence in schizophrenic patients, and questioning the basis for saying that it was virtually impossible to do anything about it.

Although the poor widow of the murdered man has made her witness statement, it will have zero impact on sentencing, and it is unlikely to have any influence on the current academic wisdom, which is that it is impossible to prevent such murders without restricting large numbers of patients, say 35,000 of them.

As you will see in the above post, I have my doubts about this claim. The facts of this horrible murder are not in dispute: the man was known to be psychotic, to have stopped medication, to be carrying knives, and to have threatened a policeman. He was also a heavy cannabis user. What more does a person have to do to be rated as a risk to others?

In my post you will see that I had some difficulty understanding the âstranger murderâ calculations, but all is much clearer if, instead of preventing a stranger murder, we try to prevent an assault. This is worth doing, because to be assaulted is a profoundly distressing event, and if injuries are caused, also a potentially life changing one.

Taking the very paper which provides the â35,000â figure for stranger murder, the figures for assault are shown below, and put things into a more manageable context. The annual rates for assault and violent crime are extraordinarily high, almost unbelievably so. Given the very high base rate, screening and monitoring are worth while. 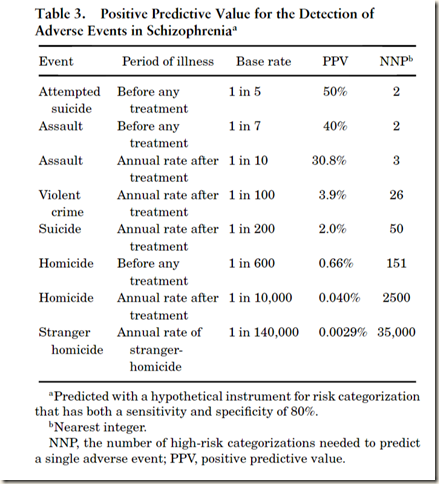 As the event becomes more rare, the positive predictive value of the risk-categorization becomes lower, and the error rate higher, with progressively more people needing to be monitored to prevent one rare event. However, to prevent an assault would require that 3 schizophrenic patients be monitored, calling them in to check they are taking their medication, and presumably (hardest part) searching for them if they failed to show up. Easier would be to link up with the Police, so that if a patient is brought in for violent behaviour of any sort there can be coordinated management of the offender. Devoutly to be wished, often denied, but in the manageable range given the will and the resources. It would provide a good service for the patients, reducing suicide attempts, improving the quality of their lives, and reducing threats to others. It would certainly be worth testing it out in a London Borough, and checking that the above figures, derived from the best sources, hold up on further examination.

None of the media coverage goes into the question which arises out of normal curiosity: is psychotic behaviour more common among Africans in the UK? The picture above shows murderer and victim, and is an all too common pairing. The answer to the African question is: 6 to 9 times higher.

We found the incidence of all psychoses to be significantly higher in African-Caribbean and Black African populations across all three centres compared with the baseline White British population [African-Caribbeans: IRR 6.7 (5.4-8.3); Black Africans: IRR 4.1 (3.2-5.3)]. These differences were most marked for narrowly defined schizophrenia (F20) and manic psychosis (F30-31). For example, after adjusting for age, the incidence of schizophrenia across the three study centres was nine times higher in the African- Caribbean population [IRR 9.1 (6.6-12.6)] and six times higher in the Black African population [IRR 5.8 (3.9-8.4)]. The incidence rates for schizophrenia in the African- Caribbean and Black African populations (71 per 100,000 person years, and 40 per 100,000 person years, respectively) are among the highest ever reported. A strikingly similar pattern was evident for manic psychosis (F30-31). After adjusting for age, the incidence of manic psychosis was eight times higher for African-Caribbeans [IRR 8.0 (4.3- 14.8)] and six times higher for Black Africans [IRR 6.2 (3.1- 12.1)] compared with the White British baseline group. The rates of depressive psychosis were also raised, but more modestly [African-Caribbeans: IRR 3.1 (1.5-3.6); Black Africans: IRR 2.1 (0.9-5.0)]. Intriguingly, the incidence rates for all psychoses were also raised for all other ethnic groups (other White, Asian, mixed, other) compared with the White British populations, albeit much more modestly (IRRs for all psychoses ranged from 1.5 to 2.7).

If screening and or monitoring was done on a rational basis, those of African descent would be given particular attention, because detection is easiest where the baseline rate is high. There is 10 year follow-up work, showing generally poor prognosis, but with some achievements.

So, screen Africans who are psychotic or manic, particularly those on cannabis or other drugs, unemployed, not compliant with treatment, and showing any threatening behaviours, and get them treated as quickly as possible.

As a historical note, and at the risk of confusing things by raising an idea since disproved, or at least called into question, it was argued in the 90s that the incidence of schizophrenia was the same the world over, but that has since been shown not to be the case, or at least subject to exceptions. Looking at the references in the above paper by Morgan et al. 2006 I donât consider it a real refutation, but it would be good to repeat the WHO study again more extensively. However, in a case of cultural lag, since I knew the team at WHO who did the work, it lurks in me as a given and true fact, whatever the current concerns about it.

These studies in countries of origin are important. If the rates of serious mental illness are low, then a case can be made for the stress of migration, and stresses of living in Western society (a common interpretation) as being the causes of the disturbance. It still needs to be explained why other migrants are far less prone than Africans. That aside, I think we need better studies in the countries of origin before being sure about causation.