You may recall a debate I had with Prof Noble about the interpretation of brain volume differences between rich and poor children in the US. I argued that a genetic interpretation was at least as plausible as an environmental one. It appeared from Prof Nobleâs paper that the Pediatric Imaging, Neurocognition, and Genetics (PING) study had identified cortical differences between the African American children and the rest, but the matter was not pursued further.

Greg Cochran now comments on another paper arising from this research, which as he points out calls into question the extreme environmentalist position regarding racial differences in ability and behaviour:

Modelling the 3D Geometry of the Cortical Surface with Genetic Ancestry. Current Biology 9 July 2015 In Press.

The authors are a San Diego team, and have worked on 562 individuals scanned when older than 12 years, by which time brain development is fairly stable. Overall, can explain about 50% of surface variability, though up to 66% for the African group. 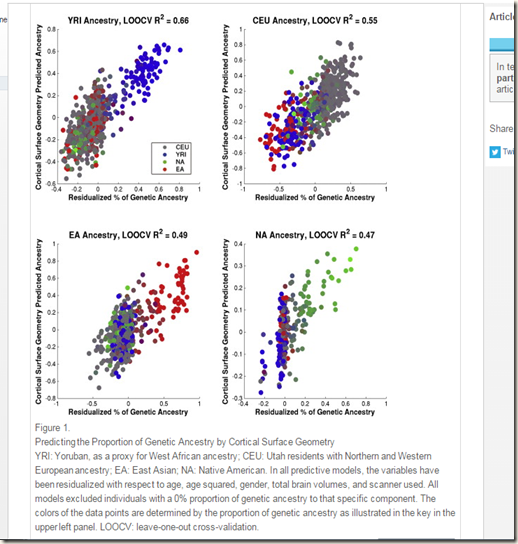 Our data indicate that the unique folding patterns of gyri and sulci are closely aligned with genetic ancestry. The geometry robustly predicts each individualâs genetic background even though the population has been shaped by waves of migration and admixtures. A previous study, using only facial features, achieved 64% explained variance in YRI ancestry among African Americans. Our 3D representation of cortical surface geometry performs similarly in predicting YRI ancestry and also performs well for the other three continental ancestries. As data in Table 1 show, the explanatory power is not due to the differences in total brain volumes, nor to the differences in areal expansion of the cortical surface. Instead, regional folding patterns characterize each ancestral lineage.

On the other hand, the global shapes of the reconstructed cortical surface geometry match W.W. Howellsâ description of craniometry of 2,524 ancient human crania from 28 populations [20]. Crania of African ancestry tended to have a narrower cranial base, and those of Northern European ancestry had elongated occipital and frontal regions. Crania of East Asian ancestry had a high cranial vault, and crania of Native American ancestry were flatter. Regarding the morphing differences of YRI, EA, and NA, all had high magnitude and variations in the posterior-temporal regions (Figure 3).These findings are consistent with the notion that temporal bones contain more variations across ancestral groups [6].

I would have expected the authors to show the total brain volumes for each group, but I cannot find those in the paper, nor in the supplemental materials. A pity, because it would help resolve some debates about brain sizes.

It may be being held over for the next paper, but of course I would like to see to what extent the 3D model predicts the intelligence measures for the children.

The authors point out that brain studies will have to bear in mind that individuals of different racial groups can affect the overall results. Of larger importance is that these brain differences in folding patterns could have links to intelligence, personality and other behaviours.

So, you can spot the difference between races in adolescence by looking at the cortical surface of the brain . When discussing this, just remember to call it âpopulation stratificationâ, or you will be troubled by fools getting in the way of your research.

The Lack of Progress in Science: Sex Differences
Razib Khan
• 98 Comments
← Are Your Vectors Correlated?Sir Tim Hunt, an Audiotape and a Curric... →
Hide 6 CommentsLeave a Comment
"Racial Brain Differences"
• 6 Comments
Commenters to Ignore
Commenters to ignore (one per line)

← Are Your Vectors Correlated?Sir Tim Hunt, an Audiotape and a Curric... →
Current Commenter
says:
Current Date at Time Now
Leave a Reply -
Cancel Reply
Commenting Disabled While in Translation Mode