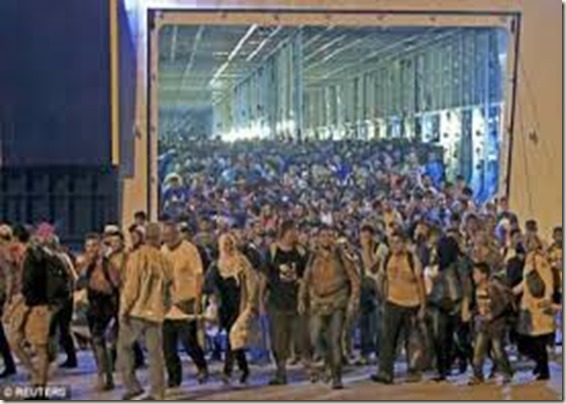 Europe is experiencing enormous inflows of people from Africa and the Middle East, and in the midst of conflicting rhetoric, of strong emotions and of a European leadership broadly in favour of taking more migrants (and sometimes competing to do so) one meme keeps surfacing: that European Jews are the appropriate exemplars of migrant competence and achievements.

European history in the 20th Century shows why present-day governments feel profound shame at their predecessors having spurned European Jews fleeing Nazi Germany. However, there are strong reasons for believing that European Jews are brighter than Europeans, and have greater intellectual and professional achievements. There may be cognitive elites elsewhere, but they have yet to reveal themselves. Expectations based on Jewish successes are unlikely to be repeated.

I am old enough to know that political decisions are not based on facts, but on presumed political advantages. The calculation of those leaders who favour immigration seems to be that the newcomers will bring net benefits, plus the gratitude and votes of those migrants, plus the admiration of some of the locals for policies which are presented as being acts of generosity, thus making some locals feel good about themselves for their altruism. One major ingredient of the leadershipâs welcome to migrants is the belief that they will quickly adapt to the host country, and become long term net contributors to society. Is this true?

Given that Europe has invited in migrants since the 1950âs it is surprisingly difficult to get good quality data on their integration, social behaviour and economic contributions. Partly this is due to the feeling that even checking on migrant achievements would be to notice their genetic and cultural differences, and would constitute a denial of citizenship. France holds strongly to the view that a citizen is a citizen, and that is all that matters, even when they know that to be untrue in terms of scholastic attainments and employability. However, there is now data on first and second generation immigrant scholastic achievements, and these serve as a cautionary tale. Acculturation requires plenty of high quality educational input, and substantial gaps remain into the second generation.

I think it is time to turn to that data. Since I am a co-author on this paper I had previously mentioned it without comment in the middle of the last ISIR conference, but I think it calls for a little more explanation and attention now.

THE COGNITIVE COMPETENCES OF IMMIGRANT AND NATIVE STUDENTS ACROSS THE WORLD: AN ANALYSIS OF GAPS, POSSIBLE CAUSES AND IMPACT

Immigration, immigration policies and education of immigrants alter competence levels. This study analysed their effects using PISA, TIMSS and PIRLS data (1995 to 2012, N 93 nations) for nativesâ and immigrantsâ competences, competence gaps and their population proportions. The mean gap is equivalent to 4.71 IQ points. There are large differences across countries in these gaps ranging from around +12 to -10 IQ points. Migrantsâ proportions grow roughly 4% per decade. The largest immigrant-based âbrain gainsâ are observed for Arabian oil-based economies, and the largest âbrain lossesâ for Central Europe. Regarding causes of nativeâimmigrant gaps, language problems do not seem to explain them. However, English-speaking countries show an advantage. Acculturation within one generation and intermarriage usually reduce nativeâimmigrant gaps (by 1 IQ point). National educational quality reduces gaps, especially school enrolment at a young age, the use of tests and school autonomy. A one standard deviation increase in school quality represents a closing of around 1 IQ point in the nativeâimmigrant gap. A new Greenwich IQ estimation based on UK nativesâ cognitive ability mean is recommended. An analysis of the first adult OECD study PIAAC revealed that larger proportions of immigrants among adults reduce average competence levels and positive Flynn effects.

In contrast, in Dubai natives had reading scores of 395; first-generation immigrants 467; second-generation 503. This 105 point difference is equivalent to 16 IQ points or 3â5 years of schooling.

Rather than look at the scales separately, Rindermann created a composite score based on PISA, TIMSS and PIRLS data so as to provide one overall competence score for both the native born population and the immigrants which had settled in each particular country. For each country you can seen the natives versus immigrant gap. By working out what proportion of the national population are immigrants you can recalculate the national competence (IQ) for that country. Rindermann proposes that native born competences need to be distinguished from immigrant competences in national level data.

The economic consequences can be calculated by looking at the overall correlations between country competence and country GDP.

The largest immigrant-based gains, assuming a) no changing population, b) disregarding other factors such as economic freedom and mineral resources, and c)assuming that the future productivity of economies is largely based on cognitive capital, are estimated for the Emirates (5439 $, per capita and per year, ppp, 2008 $) and Qatar (3108 $). But the largest losses will be seen in Central European countries (on average 1554 $; population weighted: 1202 $), e.g. in Germany 1221 $ and France 888 $, and for the US the loss is 555 $ (see also Rector & Richwine, 2013).

Let us look at some country scholastic competence scores in the light of the current large influx, picking a few likely countries of origin taken from Table 1. (I am aware that many nationals of other countries are claiming to be Syrian at the moment).

The natives of the United Kingdom have a competence score of 519 (migrants to UK 499), Germany 516 (migrants to Germany 471), the United States 517 (migrants to US 489). There, in a nutshell, is the problem: those three countries have not selected their migrants for intellectual quality. The difference sounds in damages: lower ability leads to lower status, lower wages and higher resentment at perceived differences. On the latter point, if the West cannot bear to mention competence differences, then differences in outcome are seen as being due solely to prejudice.

Here are the competence scores for some of the countries of origin of the current migrants: Syria 392, Iran 413, Algeria 396, Ghana 277, Morocco 326, Tunisia 405, Turkey 446. They vary somewhat, but all will impose at least a two generation disadvantage on the host countries. Currently nations differ in how they categorise children of native-immigrant marriages, so those disadvantages may be disguised in the second and subsequent generations, though the genetic component will of course persist. A wider definition of being an immigrant leads to larger immigrant numbers in the population and to smaller gaps between natives and immigrants.

Table 2 shows all the country scores for natives and immigrants in the more familiar IQ format, with the UK natives IQ set to 100. 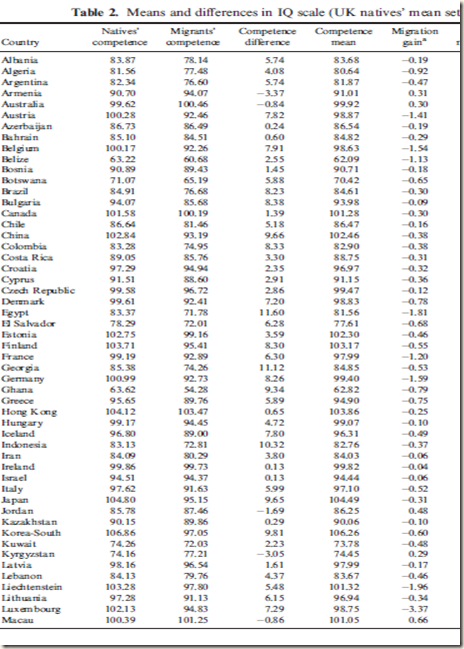 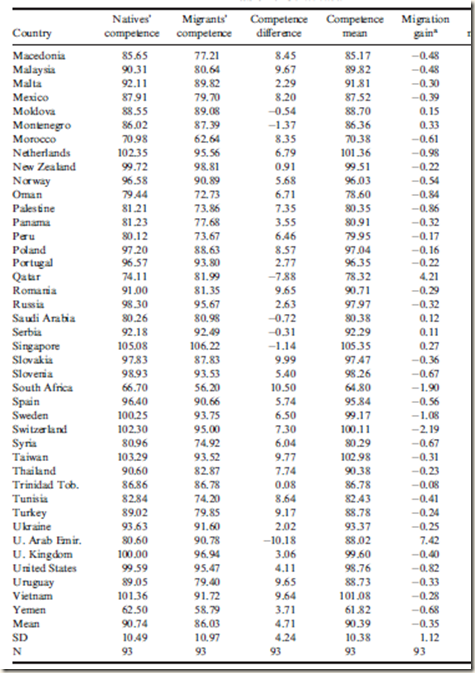 Overall, migrants have lower intelligence than natives, by almost a third of a standard deviation, sufficient to account for large differences at the upper end of the ability distribution, with implications for reduced entry into the most demanding occupations.

European leaders assume that acculturation is assured: it is merely a matter of additional investment in education and training. However, if immigrants keep their culture of origin, or create an isolated variant of it, then such âmelting potâ ideals may not be met, and the host nations merely becomes a scattering ground of different cultural and genetic seeds.

Differences between immigrants of second and first generation. Generally, students of the second generation show better results, in the order of 1.84 IQ points (or 12 scholastic competence points). The gains are tending to become smaller, a hint that acculturation becomes weaker, e.g. due to creating own milieus leading to social and cultural separation, facilitated by increasing immigrant groups and world views such as Islamic religion.

However, there are countries in which second-generation migrants do worse: Qatar -57, Emirates -38, Chile -34, Latvia -25, Czech -24, Azerbaijan -22, New Zealand -19, Costa Rica -16, Trinidad -14, Ireland -3 and Jordan -2. These negative results show that acculturation is not the whole story in second- vs first-generation differences, but probably also that there are differences in origin among immigrant groups.

Attitudes to migrants tend to be short-term. Usually led by young men, richer and better qualified than their country folk, migrants are then followed by their families, both young and old. Rapidly the dependency ratio approaches or quickly exceeds the local norm. Immigrants age just like everyone else, so the temporary advantage of being young lapses quickly.

One of the most interesting features of this migration, and the European leadership response to it, is the belief that Europe is composed of territory, resources and institutions, and these will make Europeans out of everybody. Local Europeans are seen as the beneficiaries of Europe, rather than the creators of it. Odd, because Germany could not have bailed out Greece if it had Greeceâs poor record as a tax collector. Europe works, to the extent that it does, because most northern Europeans are diligent, pay taxes on their earnings, and on their savings as well. Europe seems not to dare to say that Europeans built Europe, and that the achievement may have been due to characteristics of those Europeans.

So, the current influx of people is bewildering. Australia towed migrant boats away, and traffic stopped. Europe has towed migrant boats in, guaranteed entry, and traffic has sky-rocketed. Mostly young men from countries with low competences, these immigrants will age like all people age. The typical pattern they will follow will be to bring in wives, children, elderly parents and extended family members from low competence countries. This is certainly the case in the UK, where âfamily reunificationâ is a massive source of inward migration. Even by the second generation their competence levels will not reach the levels of the natives, additional educational resources not-withstanding.

You can read the whole paper here: