I have noticed that in my series of 4 posts âAll you ever wanted to know about intelligence (but were too bright to ask)â the first part got far more attention than the others, so I have put them together and boiled them down to 1,985 words.

âSome people are cleverer than others. It is a prominent and consistent way in which people differ from each other; the measurements we make of peopleâs cleverness produce scores that are correlated with important life outcomes; it is interesting to discover the mechanisms that produce these individual differences; and understanding these mechanisms might help to ameliorate those states in which cognitive function is low or declining.â

I find that most of the hostility about intelligence comes from bright people, who keep up with the broad sweep of newspaper reports and popular books, but have not looked at good quality research. Despite this lack they are surprisingly vehement when they ridicule IQ. It would appear that intelligence is most disparaged by the intelligent. âDefine intelligenceâ they demand, with a knowing smile.

There are three types of answer: a quip, an explanation, and a formula.

The Quip: âIntelligence is what you need when you donât know what to doâ. Carl Bereiter coined this elegant phrase. It captures the ultimate purpose of intelligence, which is to help you cope with the unknown. The best intelligence test is the puzzle to which no one knows the answer. For example, is there a detectable particle which gives objects mass?

The Explanation: âIntelligence is a very general mental capability that, among other things, involves the ability to reason, plan, solve problems, think abstractly, comprehend complex ideas, learn quickly and learn from experience. It is not merely book learning, a narrow academic skill, or test-taking smarts. Rather, it reflects a broader and deeper capability for comprehending our surroundings â âcatching on,â âmaking senseâ of things, or âfiguring outâ what to do.â Linda Gottfredson and 52 leading psychometricians agree with this explanation. http://www.udel.edu/educ/gottfredson/reprints/1997mainstream.pdf

The formula: g+group+specific skill+error, where g accounts for about 50% of the variance. (I have written this in English, but it should be displayed in eigenvalues). 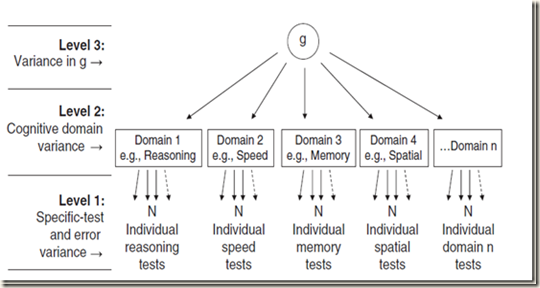 So, let us look behind the formula

âIn 1904 Spearman found that people who perform well on one type of cognitive test tend to perform well on others. That is, if cognitive test scores are ordered so that better performance equals a higher score, the correlations between them are all positive. There is shared variation among all types of cognitive performance. Spearman called this shared/common variance g: an abbreviation for general intelligence. In the 100+ years since then, every study that has applied a diverse battery of cognitive tests to a decent-sized group of people with a mix of ability levels has re-discovered the same thing: there is some cognitive variance shared by all cognitive tests. Typically, if one applies principal components analysis, just under half of the total test score variance is accounted for by the first unrotated principal component.â

This finding of 50% of the variance in ability being due to g is matched by another finding: IQ-type test scores are highly reliable, and highly stable. For example, when the same intelligence test is taken at age 11 years and repeated at almost 80, about 50% of the variance is stable.

So, half of intelligence is due to a common factor, and half of the variance is stable throughout life.

What are the causes of differences in intelligence? Twin and adoption studies show that intelligence is about 50% heritable. Counter-intuitively, heritability estimates increase to 80% as you age and put many years between yourself and your familyâs influence on you. It looks like genes take time to express themselves, or set in motion processes which take time to develop.

If you measure a diverse range of skills you can show that g is highly heritable, but there is less genetic influence that is specific to each domain. Heritabilities are probably higher in richer people, and lower in deprived groups (suggesting the environment has most effect when it is very bad).

There is no âgene for intelligenceâ with the exception of the APOE gene, where individuals with one or two e4 alleles tend to have lower ability in old age, and declining cognition across their lifetimes.

Genome wide assessment studies havenât come up with very much, yet. There is some molecular genetic evidence that some variance in intelligence is detected by single nucleotide polymorphisms. Applying genetic complex trait analysis, between a quarter and a half of intelligence variance can be accounted for by variants in linkage disequilibrium with common SNPs. This analysis cannot identify the precise causal genes. It suggests that intelligence is highly polygenic, with large numbers of variants of small effect sizes.

The genetic correlation between intelligence measured in childhood and old age in the same individual is high: to a substantial extent the same genes cause higher intelligence in both childhood and old age. All these studies require very large sample sizes (125,000) and allow major risks to be computed: in individuals who are at genetic risk for schizophrenia, but have not exhibited the disorder, cognitive ability in old age is lower than in those without schizophrenic genetic risk.

With regards to the much vaunted effects of the environment, twin studies suggest that the contribution of the shared environment (family for example) to intelligence is small to negligible by adulthood, and the remaining variance is due to individually created environments and error.

There is a general finding that there is a modest correlation of 0.30 between intelligence test scores and brain size, and a similarly sized correlation between intelligence and the general integrity of the brainâs white matter, as measured by diffusion tensor MRI. Sample sizes here are of the order of 500 persons. The association is largely accounted for by peopleâs differences in speed of processing. Cleverer brains seem to be more efficient. Consequently, they can think about complex problems faster and for longer, thus being more likely to find solutions.

âPeople who score better on intelligence tests tend to stay longer in education, to gain higher-level qualifications, and to perform better on assessments of academic achievement. Some of the correlations between intelligence scores at the end of primary school and academic results some years later are high, suggesting that it is not just a matter of education boosting intelligence. Also, educational attainment has a moderately high heritability, and a strong genetic correlation with intelligence. On the other hand, there is also evidence that education can provide a boost to scores on tests of complex thinking, and some of these increments last into
old age. Therefore, there is probably a bidirectional causal association between intelligence and education.â

âPeople who score better on intelligence tests tend to go into more professional occupations (typically those with higher status) and to perform better in the workplace. There is a positive association between intelligence test
scores in childhood and social position later in life: people who score higher tend to be in more professional jobs, to live in less deprived areas, and to have higher incomes.â

âThe association is not perfect. Results show that, when it comes to attained social position in maturity, intelligence, education and parental background all count to
some extent. That is, there is some meritocracy and intelligence-driven social mobility, and there is also some social inertia.â

Intelligence seems to have a cumulative effect, and relates more strongly to occupational and social position later rather than earlier in adulthood.

Intelligence is associated with better health and longer lifespans, but it is not entirely clear why. The early explanation was that more intelligent people learned quickly how to avoid health hazards. They gave up smoking sooner in life, bothered to read the medicine labels, and followed health advice generally. Now it seems possible that both intelligence tests and life itself test a general underlying bodily system integrity, a fundamental mens sana in corpore sana which, if you are lucky enough to have it, gives you health, intelligence and long life without much exertion on your part. Typical, isnât it, that evolution doesnât understand human concepts of fairness and equity? Also typical that many very good papers were written showing how intelligent people avoided health hazards, and now it turns out that those will have to be re-written.

âThere are declines in cognitive function even among people who do not develop dementia. Not all cognitive functions decline at the same rate. Some cognitive functions â often referred to as markers of crystallized intelligence â hold up well with age. These include vocabulary and general and specific knowledge. The cognitive functions that tend to decline are called fluid intelligence. These tend to involve on-the-spot thinking with novel materials, and in situations in which past knowledge is of limited help. This includes abstract reasoning, spatial abilities, processing speed, and working and other types of memory.

Not everyone experiences the same rate of cognitive decline, and there is a growing interest in the genetic and environmental (biological and social) determinants of peopleâs differences in age-related cognitive changes. Some of the more solid evidence exists for the following being cognitively protective: not having the APOE e4 allele, being physically more active and fit, and not smoking.â

Two main hypotheses are: some people have a âcognitive reserveâ such that their brains are better able to withstand damage, perhaps because a bigger brain provides redundancy or because some peopleâs brains are more flexible in reorganizing networks to regain or retain cognitive functions; or the common system hypothesis that age-related decline of different bodily systems is correlated; that people who are experiencing faster cognitive declines might also be experiencing faster declines in sensory and some physical functions, making researchers consider inflammation, oxidative stress, telomere length, and the hypothalamic-pituitary-adrenal axis as common causes of variance.

Finally, Deary goes on to discuss the

âso-named Flynn effect, whereby the absolute scores on intelligence tests have been rising since testing started in the early-to-mid 20th century. The extent of the rise, its geographical distribution in the world, and especially its causes are all still being studied. Some hypothesise that better nutrition might explain some of the increase, and others put it down to societyâs making more accessible and emphasizing the skills tested by intelligence tests.â

âOn the biological side there is research showing that breast feeding is associated with a sizeable advantage in intelligence later in childhood. However, there is also some evidence that this is explained by the higher intelligence scores of the mothers who tend to breastfeed.

âAdoption from a deprived to a more affluent setting is reported to be associated with an intelligence advantage. There is still debate about the effectiveness of intensive intervention programmes early in life, and whether any cognitive
advantages last or whether advantage accrues to social rather than cognitive skills.â

Deary ends with a plea: âHuman intelligence is important; it matters in our lives.â

Here are his references:

The Lack of Progress in Science: Sex Differences
Razib Khan
• 98 Comments
← The Wages of MandelaISIR Press Release: Like Humans, Dogs H... →
Hide 15 CommentsLeave a Comment
"Intelligence in 2000 Words"
• 15 Comments
Commenters to Ignore
Commenters to ignore (one per line)