Honesty is a core value, the ultimate test of deferred gratification. It has a quasi-religious quality to it, in that it requires a belief that someone will notice that you restrained yourself from the short-term convenience of lying: either an all-seeing deity or a body of right thinking honest persons into whose quiet precincts one gains admission. Honesty is not the favoured strategy of people in a hurry. At a larger level, honesty is measure of respect for society: although cheating provides personal advantage it debases the society in which the cheater lives: if he steals a bicycle then everyone must carry a bicycle lock thereafter. Understanding that particular cause and effect relationship requires a modicum of intellect, self-restraint and long-term thinking.

Good institutions that limit cheating and rule violations, such as corruption, tax evasion and political fraud are crucial for prosperity and development. Yet, even very strong institutions cannot control all situations that may allow for cheating. Well-functioning societies also require the intrinsic honesty of citizens. Cultural characteristics, such as whether people see themselves as independent or part of a larger collective, that is, how individualist or collectivist a society is, might also influence the prevalence of rule violations due to differences in the perceived scope of moral responsibilities, which is larger in more individualist cultures.

If cheating is pervasive in society and goes often unpunished, then people might view dishonesty in certain everyday affairs as justifiable without jeopardising their self-concept of being honest. Experiencing frequent unfairness, an inevitable by-product of cheating, can also increase dishonesty. Economic systems, institutions and business cultures shape peopleâs ethical values, and can likewise impact individual honesty.

Unobserved in a cubicle, participants played a dice-rolling game for money. They were paid reasonable sums in their local currency according to how they said the dice fell, but had the opportunity to report better results than they actually obtained. Although the experimenters did not peer over their shoulders, the spirits of Pierre de Fermat, Blaise Pascal and Chevalier de MÃ©rÃ© were watching, and honest persons were distinguishable after the event from those who cheated a bit (âjustified dishonestyâ) and those who cheated a lot (âfull dishonestyâ). For example, in this game throwing a six gained you nothing. How many in a national sample reported throwing a six?

Although individual dishonesty is not detectable, aggregate behaviour is informative. In an honest subject pool, all numbers occur with a probability of one-sixth and the average claim is 2.5 money units. We refer to this as the âfull honestyâ benchmark. By contrast, in the âfull dishonestyâ benchmark, subjects follow their material incentives and claim 5 money units. 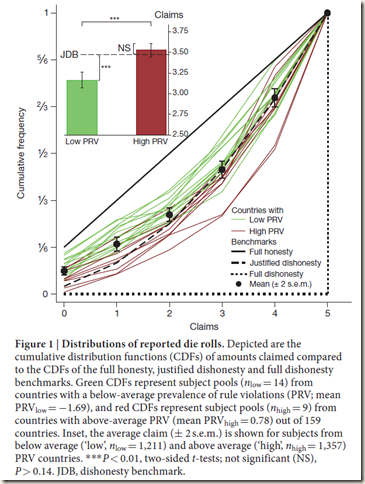 The authors ran their experiments from 2011 to 2015. Talk about dedication. Scrupulous sea-green incorruptible honesty would result in 2.5 money units. Even citizens of decent countries stray from rectitude and award themselves 3.17 money units, a 0.67 tip for self-interest. Those from more corrupted polities claim 3.53 money units or 1.03 money units more than they should. They are 54% more self interested.

So, all though not all the world was tested, this is likely to be a representative sample.

Our participants, all nationals of the respective country, were young people with comparable socio-demographic characteristics (students; mean age of 21.7 (s.d. = 3.3) years; 48% females; who, due to their youth, had limited chances of being involved in political fraud, tax evasion or corruption, but might have been exposed to (or socialized into) certain attitudes towards (dis-) respecting rules.

Where do the cheats live? The authors give 4 ways of calculating honesty, and I have picked the % of honest people in each country measure as the most explicable metric for everyday Bayesian interaction with foreigners. 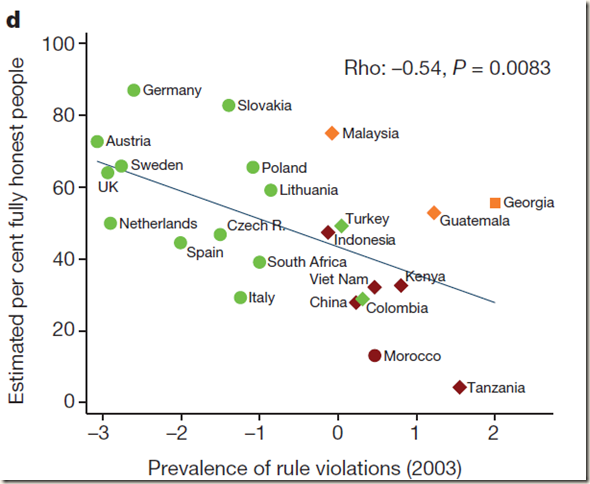 On a topical note, given the referendum on British membership of the European Union, it would probably be better for the European Union to consist of Germany, Slovakia, Austria, Sweden, Poland, UK and Lithuania; but not Italy, and possibly not Spain. A real pity France was not included in the experiment, but you cannot always have what you want.

After four years of labour the authors have come to some conclusions, and here they are:

Given that the experiment holds the rules and incentives constant for everyone, the large differences across subject pools are also consistent with a cultural transmission of norms of honesty and rule following through the generations and a co-evolution of norms and institutions. Societies with higher material security, as measured by Government Effectiveness, tend to be more individualist, and more individualist societies tend to have less corruption. Consistent with this, we find that subject pools from individualist societies have lower claims than subject pools from more collectivist societies and also from more traditional societies and societies with survival-related values. Further econometric analyses developed in economic literature on culture and institutions applied to PRV support the argument that both the quality of institutions, as well as culture (individualism) are highly significantly (and likely causally) correlated with PRV.

Taken together, our results suggest that institutions and cultural values influence PRV, which, through various theoretically predicted and experimentally tested pathways, impact on peopleâs intrinsic honesty and rule following. Our experiments from around the globe also provide support for arguments that for many people lying is psychologically costly. More specifically, theories of honesty posit that many people are either honest, or (self-deceptively) bend rules or lie gradually to an extent that is compatible with maintaining an honest self-image. Evidence for lying aversion and honest self-concepts has been mostly confined to western societies with low PRV values. Our expanded scope of societies therefore provides important support and qualifications for the generalizability of these theoriesâpeople benchmark their justifiable dishonesty with the extent of dishonesty they see in their societal environment.

This is a very good paper. The experiment is simple, the results compelling, the implications considerable. It bounces out of the experimental cubicle into socio-political and philosophical dilemmas. Will immigrants from corrupt countries adopt the values of the society they move to, or keep cheating? Will the current levels of rule-following in decent countries persist, or drift down to less honest global levels? Conversely, might growing affluence make honesty the next must-have consumer requirement across the world?

The authors may have thought it outside the bounds of their work to consider why societies are âindividualistâ or âcollectiveâ or why some have developed reliable institutions and others havenât. Cheating, they say, depends on institutions and cultural values but these are created and maintained by the people who live in the countries studied. What drives some to peoples to relative honesty, strong institutions, civil calm and material wealth and others to dishonesty, corruption, unrest and poverty?

I will be posting more about this topic, now that a distinguished colleague has spent some time crunching the relevant additional data. He has many of the answers. You know which way I am heading, but bear with me for a while.