Every now and then a blockbuster paper comes along which, like the 1939 top grossing $1,640,602,400 movie âGone with the Windâ, carries all before it. It may be that âMeta-analysis of the heritability of human traits based on fifty years of twin studiesâ by Tinca Polderman, Beben Benyamin, Christiaan de Leeuw, Patrick Sullivan, Arjen van Bochoven, Peter Visscher & Danielle Posthuma in Nature Genetics is such a paper. Although the title is not very snappy, it is a relief to read a paper on genetics where the author list is less than a thousand. This Magnificent Seven have ploughed through fifty years of twin studies to assemble 14,558,903 partly dependent twin pairs drawn from 2,748 publications. After all these monumental labours, perhaps their publication may yet get known as the âGone with the Windâ paper, because it blows away much confusion, much prevarication and much obfuscation about twin studies.

The authors find that estimates of heritability cluster strongly within functional domains, and across all traits the reported heritability is 49%. For a majority (69%) of traits, the observed twin correlations are consistent with a simple and parsimonious model where twin resemblance is solely due to additive genetic variation. The data are inconsistent with substantial influences from shared environment or non-additive genetic variation. (This finding has been under-reported).

All human traits contain a substantial heritable element. The blank slate is totally false. If you have colleagues who doubts the twin method or who have difficulty accepting the power of ancestry, shall I repeat for them Rhett Butlerâs last words to Scarlett O’Hara right now, or is it better that I tell you a little more about the findings?

I expect you have an interest in the results on cognition, so rest easy, heritability is high, though not as strong as for skeletal, metabolic, ophthalmological, dermatological, respiratory, and neurological traits. Usually there is a big difference (top line of figures) between the high correlations for monozygotic and the lower correlations for dizygotic twins, showing a strong genetic effect. The exception is social values, in which the environment makes a bigger contribution than usual, though not quite as big as heredity. 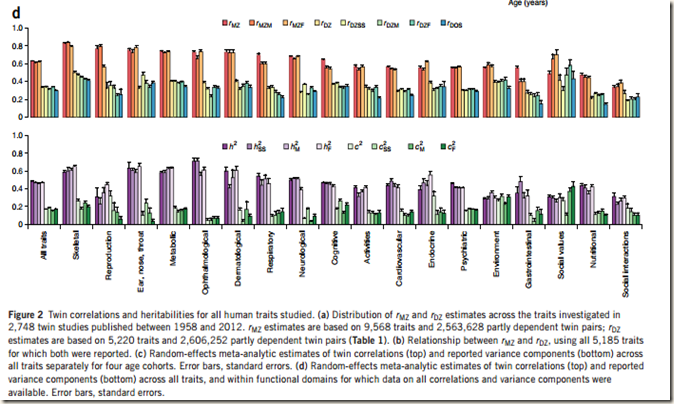 Cognitive traits correlate 0.646 in identical twins, 0.371 in fraternal twins, with miniscule error terms of .01 in these enormous samples. An additive model seems appropriate for cognition.

Our results provide compelling evidence that all human traits are heritable: not one trait had a weighted heritability estimate of zero. The relative influences of genes and environment are not randomly distributed across all traits but cluster in functional domains. In general, we showed that reported estimates of variance components from model-fitting can underestimate the true trait heritability, when compared with heritability based on twin correlations. Roughly two-thirds of traits show a pattern of monozygotic and dizygotic twin correlations that is consistent with a simple model whereby trait resemblance is solely due to additive genetic variation. This implies that, for the majority of complex traits, causal genetic variants can be detected using a simple additive genetic model.

Approximately one-third of traits did not follow the simple pattern of a twofold ratio of monozygotic to dizygotic correlations. For these traits, a simple additive genetic model does not sufficiently describe the population variance. An incorrect assumption about narrow-sense heritability (the proportion of total phenotypic variation due to additive genetic variation) can lead to a mismatch between the results from gene-finding studies and previous expectations. If the pattern of twin correlations is consistent with a substantial contribution from shared environmental factors, as we find for conduct disorders, religion and spirituality, and education, then gene-mapping studies may yield disappointing results. If the cause of departure from a simple additive genetic model is the existence of non-additive genetic variation, as is, for example, suggested by the average twin correlations for recurrent depressive disorder, hyperkinetic disorders and atopic dermatitis, then it may be tempting to fit non-additive models in gene-mapping studies (for example, GWAS or sequencing studies). However, the statistical power of such scans is extremely low owing to the many non-additive models that can be fitted (for example, within-locus dominance versus between-locus additive-by-additive effects) and the penalty incurred by multiple testing. Our current results signal traits for which an additive model cannot be assumed. For most of these traits, dizygotic twin correlations are higher than half the monozygotic twin correlations, suggesting that shared environmental effects are causing the deviation from a simple additive genetic model. Yet, data from twin pairs only do not provide sufficient information to resolve the actual causes of deviation from a simple additive genetic model. More detailed studies may identify the likely causes of such deviation and may as such uncover epidemiological or biological factors that drive family resemblance. To make stronger inferences about the causes underlying resemblance between relatives for traits that deviate from the additive genetic model, additional data are required, for example, from large population samples with extensive phenotypic and DNA sequence information, detailed measures of environmental exposures and larger pedigrees including non-twin relationships.

By all standards of academic debate, this is the mother of âF*** Offâ samples, which should lay low five decades of quibbling about the twin method. Author Beben Benyamin has given reassuring interviews saying that it is not a case of âgenetics versus environmentâ but genetics with environments (which was always understood by researchers). The genetic component is increasingly understood, the environmental component remains vague, with ad hoc speculations about shared variance which are usually not validated. Despite this massive paper being reported in The Guardian (though without drawing attention to the findings on cognitive ability) I fear that many journalists, commentators and researchers, in the attributed words of a British Trade Union leader turning down a management offer he considered too low, will treat it âwith a complete and utter ignoralâ.

Where do the heredity sceptics go now?

← Are Academics Open to Hypotheses?âGone with the Windâ Strikes a Chord →
Current Commenter
says:
Current Date at Time Now
Leave a Reply - Comments on articles more than two weeks old will be judged much more strictly on quality and tone
Cancel Reply