I had always imagined that death had a certainty to it. Taxes are a close second, but death is easier to diagnose. The problem comes when the cause must be written on the certificate. A heavy drinker who falls downstairs has an accidental death, but it was brought on by his habitual drinking. Someone who dies as a consequence of type 2 diabetes may have died from over-eating. An elderly person with several chronic conditions might die of influenza, but his comorbidities deserve mention.

Information from death certificates is used to measure the relative contributions of different diseases to mortality. Statistical information on deaths by underlying cause is important for monitoring the health of the population, designing and evaluating public health interventions, recognising priorities for medical research and health services, planning health services, and assessing the effectiveness of those services. Death certificate data are extensively used in research into the health effects of exposure to a wide range of risk factors through the environment, work, medical and surgical care, and other sources.

The document makes it clear that âCOVID-19 is an acceptable direct or underlying cause of death for the purposes of completing the Medical Certificate of Cause of Deathâ. Although there is an issue in attributing a death to Covid-19, the same has been true for death certificates for a long time: underlying causes are always a bone of contention. There may be over-attribution to Covid now, but if so then it will not influence the excess deaths measures, since those count deaths by the dates on which they occur, regardless of cause, and compare them to the average of previous years, generally the previous five years.

A more pressing problem is that the date on which Covid deaths are announced is usually not the dates on which the deaths actually occurred, merely the date on which a whole lot of deaths have been bundled together for reporting purposes. Some authorities are faster than others at reporting death certificates. So, daily death rates are usually no such thing, and dramatically inflate the size and variability of actual daily deaths. When dates are correctly allocated to the actual dates on which they occurred, then the second wave totals are less extreme, probably just somewhat higher than December averages.

At the same time, it is all too true that intensive care facilities are over-stretched, sometimes dangerously so. Having more resources seems desirable, but most of the time they wonât be used, and are not resource effective. Allocating scare resources is always hard, and intensive care requires well trained staff plus very bright people who are able to improvise and draw on existing medications and treatments when faced with novel illnesses. Perhaps it is possible to have more resources and be flexible in their use, training many and using only a few most of the time, then getting all hands to the pump during epidemics. Devoutly to be wished.

Against all this, the rollout of vaccines continues. Here a whole cluster of factors combine. The status quo ante is that the NHS delivers an annual flu jab to elderly or vulnerable persons, inviting them into General Practitioner surgeries for their vaccination. It is now a simple, well tried system, mostly using text messages and then patients phone in to book their session.

In the 2019/20 flu campaign, around 15.3m vaccinations were administered to eligible groups, covering patients over 65, those in clinical at-risk groups, pregnant women, children aged two to three years old, primary school children and healthcare workers. (This year it will be offered to 30 million).

So, why has the same delivery system not been used for Covid? Freezers. The cold chain requirements of the Pfizer vaccine are very demanding. Minus 70 Centigrade requires careful and expensive handling, with a requirement to use what you thaw out pretty quickly. Individual GPs canât handle this, so a whole new system has had to be put together, meaning that new locales, new staff and new procedures have had to be developed. Most GP practices grouped together to use a common local facility. They became the providers of the patient names, according to national age and risk criteria. Their function was to tell their patients they could now ring up that central provider to confirm that they wanted to be vaccinated. Later, that central provider comes up with a date and time.

I promised you complexity, and here comes more of it. Pfizer had agreed to provide a large number of vaccines. In order to do so in Europe, they had a look at their factory and decided that this winter, in the middle of the second wave, it would be a good time to slow down production to make factory changes which will later speed up the pace and volume of vaccine production. The immediate consequence is that there are shortages, such that the local centres cannot work every weekday as expected. They wait till they are told that they will be getting a batch, and then book 500 patients a day for two days. Other days each centre is idle.

All is not lost, because there is a further complexity. If you form a mega-centre, and can do 2000 jabs a day, then you can order direct from Pfizer. It is said to be automatic. These mega-centres are due to open on 1 February, though the locales have yet to be finalised. Happily, one of the London ones might be the Science Museum. That would be joyful.

Some of you may find this all too simple, so I will do my best to serve up the complexity I promised. Despite booking months in advance, and I think paying well in advance, it seems clear that there will not be enough Pfizer vaccine to meet demand, and to provide the doses originally promised in good time. Oxford/AstraZeneca is now coming on stream, and patients formerly promised Pfizer are being told they will now get AstraZeneca. That vaccine can be kept in an ordinary refrigerator, lasts longer, and is thus far, far easier to use.

The published results appeared to show Pfizer was better, say 93% against 70%, but that turns out to be yes, more complex than it may seem. The trials were different and used different criteria for effectiveness. AstraZeneca is said to have monitored symptoms more thoroughly than Pfizer, and as of 20 November 2020: No hospitalisations or severe cases of COVID-19 in participants treated with AZD1222.

That seems to be a good bottomline measure. By any measure, both vaccines are as good or better than flu jabs.

Despite all this, current estimates are that 4.6 million UK citizens have received their vaccination against the coronavirus. Not bad at all. Israel is at 35%, United Arab Emirates 13.5%, UK 6.8% and then US 4.8%.

Israeli data is coming in, with predictably conflicting results. Despite having a great and increasing sample size, there has been insufficient time for a full evaluation of the long term protective effect. For example, case-ness is counted against a vaccine from the moment it is injected. Some patients will have come in with Covid without knowing it. Others will catch it before the vaccination can take effect. It seems prudent to look only at the 14 day onwards results. Those look good, as they did in the trial period, and eventually the evaluative process will be standardised.

A final measure of complexity is the debate about whether vaccination should involve two doses, as designed and tested, or just one for the time being, with another to follow if and when supplies improve, or if and when it seems necessary, since most of the effect is due to the first jab. If that were not so, vaccinations would not be possible. Currently, those UK citizens (mostly elderly) lucky enough to have had their jab have also been given a date, up to about 12 weeks later, for their second jab. That is the plan. In terms of public health, it would probably be better to give the second jab as a first jab to someone else, thus probably reducing their likelihood of becoming a brewery of more virus which will later passed on to others, sometimes in mutated form, making everything more difficult for everybody.

A big reason for vaccinating fast, and as widely as possible, is that deaths will be prevented. In the UK, possibly 1370 per million. It will take many sore arms, but why not help people live? I have simplified this as much as possible, and given more time would have made it simpler. 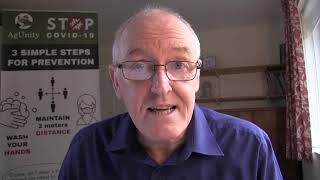 Is Forced Isolation of the Unvaccinated Really the Leftâs Answer to the Pandemic?
Jonathan Cook
• 395 Comments • Reply The Conspiracy Theorists Were Right; It IS a "Poison-Death Shot"
Mike Whitney
• 1,130 Comments • Reply
← Waiting for the JabVaccines and Trust: Shortages →
Hide 49 CommentsLeave a Comment
"Death, Probably; Life Even More Likely"
• 49 Comments
Commenters to Ignore
Commenters to ignore (one per line)