The enchanted loom is slowly giving up its secrets, of which it holds many. The patterns of brain activity that so many researchers have tracked with wonder are beginning to reveal a larger pattern: the possibility that each of us has a habitual pattern of brain activity which identifies us, and distinguishes us from others. So, dear reader, we are separated by the idiosyncratic rhythms of our brains, dancing to a different beat, visiting a different pattern of cortical locations, and no doubt coming to different conclusions. How good to at least have a common language in which to discuss these findings. Also in common, to my great surprise, is that the pattern of detected brain activity is predictive of fluid intelligence. To solve problems, it would seem that our brains have to do very similar work. The better they do so, even with their individual variants, the better we solve problems. So, we are individuals, though with individual problem-solving patterns of different power.

The unexpected finding which I find startling is that individuals can be identified by their habitual brain patterns (not just on specific tasks) and those patterns of activity predict fluid intelligence on Ravenâs Matrices at about r=0.5 This is about as good as another mental task, though not good enough as a Wechsler subtest (where 0.6 or 0.7 and above is required).

Functional magnetic resonance imaging (fMRI) studies typically collapse data from many subjects, but brain functional organization varies between individuals. Here we establish that this individual variability is both robust and reliable, using data from the Human Connectome Project to demonstrate that functional connectivity profiles act as a ‘fingerprint’ that can accurately identify subjects from a large group. Identification was successful across scan sessions and even between task and rest conditions, indicating that an individual’s connectivity profile is intrinsic, and can be used to distinguish that individual regardless of how the brain is engaged during imaging. Characteristic connectivity patterns were distributed throughout the brain, but the frontoparietal network emerged as most distinctive. Furthermore, we show that connectivity profiles predict levels of fluid intelligence: the same networks that were most discriminating of individuals were also most predictive of cognitive behavior. Results indicate the potential to draw inferences about single subjects on the basis of functional connectivity fMRI.

They scanned 126 subjects (22 to 35 years of age, and only 40 of them men, but a larger sample than the usual n=16 neurobollocks stuff) 6 times over 2 days and showed that the functional connectivity profile derived from one session could uniquely identify the individual from the set of profiles obtained on the following session. Identification is successful across rest sessions, task sessions and even across rest and task. So, the brains are identifiable regardless of what they are doing in terms of activity. You are special, in your own way (and everyone else also).

Intelligence was assessed with a 24 item version of Ravenâs Matrices. This is a good test, though a bit crude at higher levels. Then, in an interesting procedure, they chose one scan as the test item, and used all the rest (n-1) to create a model based on positive and negative discriminative features, and from that model generated a prediction about the Ravenâs score. The positive feature model correlated 0.5 with the actual intelligence scores. When different regional networks were compared, the most consistent correlations were with the fronto-parietal networks at 0.42 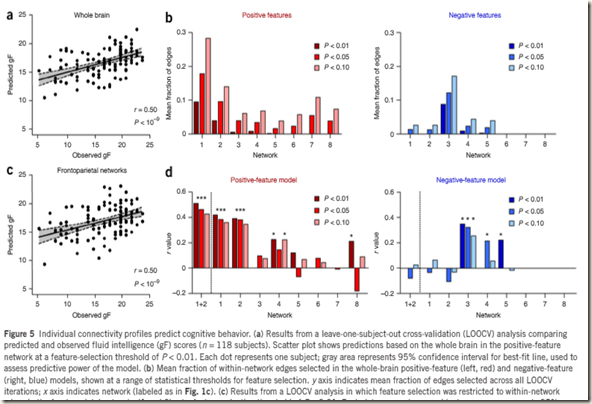 The authors compare the distinctive brain activity patterns to a fingerprint. They can identify individuals with near perfect accuracy from their connectivity matrix. They obtained their most accurate predictions by combining the two fronto-parietal networks, which deal with higher-order associations and are the most recent in evolutionary terms, and also show the greatest inter-subject variability.

Comment: The sample size is good for this sort of work. Identifying individuals could be harder with larger sample sizes, so we will have to see if the fingerprint analogy is merited (though at very high population numbers fingerprints are not always discriminably unique). It would be interesting to see if the addition of other intelligence measures improves the correlation. I think it would give better fine detail in the higher range of ability.