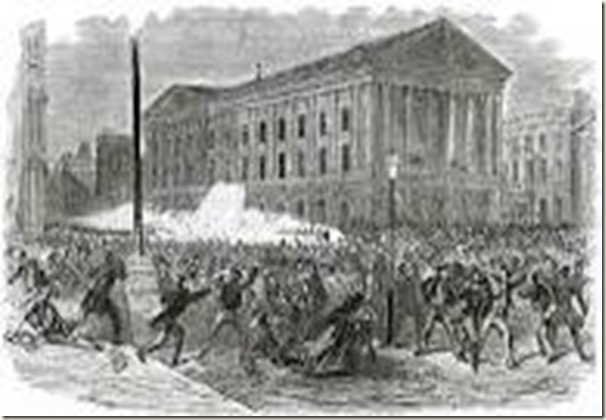 Considering that I spent 7 years studying the cognitive effects of cortical lesions sustained in childhood, I should have been open to the possibility that brains might have increased in size over the last century. If I thought about it at all, I think I assumed that any such increase was too small to notice.

Now the barefoot urchin arrives again, with a manuscript from Woodley of Menie, and makes not the slightest pretence before disappearing into the shrubbery with the undermaid, who put up not even a token show of reluctance. How can even those of us with Private Means carry out our Investigations and Reserches when at any moment we could be dismembered by The Mob? It might be prudent to distribute some nourishing meals, as well as the usual Temperance pamphlets. What does the good Woodley adumbrate?

It’s getting bigger all the time: Estimating the Flynn effect from secular brain mass increases in Britain and Germany
LEARNING AND INDIVIDUAL DIFFERENCES 45:95-100 Â· JANUARY 2016

Secular increases in brain mass over nearly a century have been noted for both males and females in the UK and Germany. It has been argued that such trends may be associated with the Flynn effect. The IQ gain predicted on the basis of these trends is 0.19 and 0.08 points per decade for UK, and 0.2 and 0.15 points per decade for German males and females respectively,indicating a small contribution to the Full scale IQ trends in these countries (2.95% of the German decadal gain and 12.73% of the UK gain). There is also a sex difference in the rates of brain mass gain in both countries, favoring males. Temporal correlations between the secular trend in UK brain mass and European Flynn effects on Fullscale IQ, Crystallized, Fluid and Spatial abilities reveal correlations ranging from 0.751 in the case of Fluid ability to 0.761 in the case of Crystallized ability. The brain mass increase may be an imperfect proxy for changes in specific neuroanatomical structures important for IQ gains. Its small contribution to these gains is also consistent with the influence of other contributing factors. Increasing brain mass is predicted by the life history model of the Flynn effect as it suggests increased somatic effort allocation into bioenergetically expensive cortical real estate facilitating the development of specialized cognitive abilities.

Miller and Corsellis (1977) reported increases in brain mass, utilizing autopsy materials sourced from the London Hospital Pathological Institute amounting to 52 g (from 1372 g to 1424 g) over 80 years (between birth years 1860 and 1940) among their male sample (N=4319), and 23 g (from 1242 g to 1265 g) over the same period for their female sample (N= 3878). Miller and Corsellis admitted into their comparison groups all individuals aged between 20 and 50 years at time of death for whom the brains were not considered pathological (approximately 36% of the brains were excluded on this basis). To determine the secular mass change they simply regressed the mean brain mass of those aged between 20 and 50 at time of death against birth year. The running five-year means for both males and females employed by Miller and Corsellis in their analysis were extracted from their figure.1 (p. 254) and are reproduced graphically here in Fig. 1. 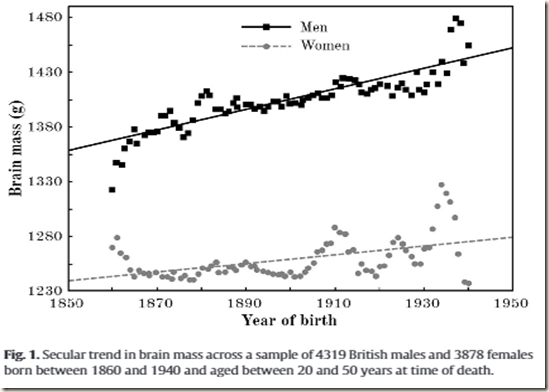 To my eye the pattern is slightly odd, in that it departs from linearity more for women than men (they may have been fed less well) and both sexes do well in the early 1930, a time associated mostly with hardship. It would be particularly good to see the war years in this series, since rationing was said to have improved nutrition.

Haug (1984) presents the results of 12 studies reporting aggregate brain masses for both males and females (tables 6 and 7, p. 493) collected via autopsy from various pathological and forensic institutes and broken out by age. The studies span the period from 1861 to 1978. Six of the studies involve German-sourced samples. A smaller seventh study (Kretschmann, et al., 1979), not considered by Haug, also reports brainmass means for German subjects. The trend in brain mass across the seven German studies spanning the study years 1880 to 1979 will here be analyzed in order to determine the presence of secular trends within this country. A weighted average of brain masses collected from those with ages ranging from 30 to 49 and 50 to 59 is utilized as the basis for cross-sectional comparison, via regression against study year.The secular trend in height is not controlled in the present analysis, as gains in height and brain mass share variance stemming from a more general secular increase in body mass, which indicates substantial collinearity. Consistent with this Haug (1984, p.492) found a correlation between the two of > 0.8. 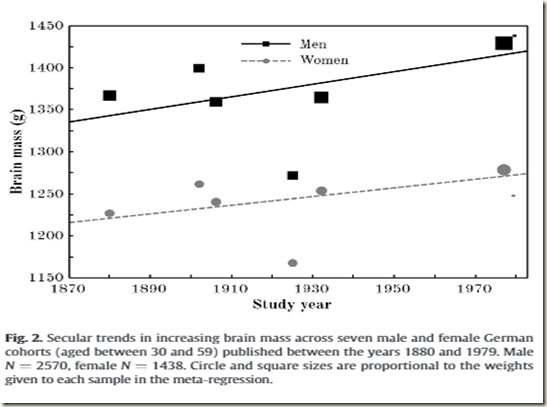 Estimating secular gains in IQ from increasing brain mass Jensen (1998, p.326) proposed a method for estimating Fullscale IQ gains stemming from secular increases in brain volume/mass. The method involves converting the gains into a change in standard deviation units by dividing the gains in grams by the reference standard deviations of brain mass for males and females. Based on the assumption that increasing brain mass is boosting IQ this d value must be multiplied by the correlation between brain mass and IQ. The resultant d value can then be multiplied by 15 (the “standard” standard deviation of IQ) yielding IQ points gained throughout the birth and study years covered by Miller and Corsellis (1977) and the German studies respectively.

Correlation between brain volume/mass and IQ

A recent comprehensive meta-analysis has established that the population correlation between brain volumeand IQ is significantly positive at Ï=0.24 (Pietschnig et al. 2015). This value is somewhat smaller than the value presented in a previous meta-analysis (i.e.McDaniel, 2005; Ï= 0.33), however Pietschnig et al. sampled more representatively than did McDaniel. Multiplying the increase in brain mass (in standard deviation units) by this estimate will yield the standardized IQ gain (as per Jensen, 1998). Rushton and Ankney (2009) noted that brain volume is an extremely strong proxy for brain mass, and that, while rarely ever investigated, similar correlations with IQ are obtained when mass is directly estimated instead of volume. Thus the IQ brain volume correlation can be considered synonymous with the IQ brain mass correlation. Pietschnig et al. (2015) noted no significant sex-differences in the strength of the IQâbrain volume correlation; therefore the value of 0.24 will be used in computing IQ gains for both sets of male and female data.

Males appear to have gained brain mass to a significantly greater degree than females over time, which suggests that there may have existed inequalities in terms of exposure to brain mass enhancing environmental factors that have historically favored males. Alternatively, that females have gained on males on the Raven’s Matrix test over the last century (Flynn, 2012), hints at a possible sex difference in terms of how environmental and cultural changes may be assimilated into neuroanatomical and cognitive change.

This paper is interesting, because it shows that the crude measure of brain size accounts for a small but noticeable part of the Flynn effect. In future more detailed results from brain scans may show more important changes in the constitution of the brain. As the authors say, brain size is a real measure (with a true zero) which is a biologically objective correlate of cognitive ability.

Whether they will burn down the stately homes in rage or queue up patiently to visit them and imbibe their culture is another matter, though the latter is more likely. With these deep thoughts I cast another yuletide log on the cottage fire, and wish you all a Merry Christmas.