The IQ view of the world is that the citizens of China, Japan and Korea are brighter than citizens of Europe and the other European derived countries that comprise The West. Not only do Orientals, or Far Easteners, or East Asians get higher scores on intelligence tests, but they also do extremely well on scholastic tests, including Maths and Science. Therefore, we would assume that they would be over-represented in the highest realms of scientific achievement, and collect more than their population-based share of Nobel prizes.

Not so. Europeans gain 20 times as many prizes as Orientals. Are the intelligence tests wrong, or do Orientals lack some other essential ingredient of genius? Talking of which, have you heard the story about the Dutchman, the Finn and the Japanese gentleman? How on earth have Kenya Kura (Gifu Shotoku Gakuen University, Japan), Jan te Nijenhuis (University of Amsterdam) and Edward Dutton (University of Oulu, Finland) managed to get together? Such an improbable trio can only have arisen from the London Conference on Intelligence, and whose next conference will be in May 2016. If you are researching intelligence and are either at the beginning of your career, or well-established but finding it difficult to get informed debate about your work, send me details about your research. Be warned: we have no funds.

From ancient natural philosophy to modern physics, the history of science has been dominated by Europeans. It would not be controversial to state that the most distinguished scholars in the world post-1900 have been Nobel laureates and Fields medalists. Table 1 shows the number these prominent people by racial category, which is taken from Lynn (2007 ), and here extended to 2014. Table 1 shows that Europeans have won 0.6 Nobel Prizes and Fields Medals per million, whilst the Northeast Asians have won only 0.03 per million, which is about one twentieth of the Europeansâ achievement. 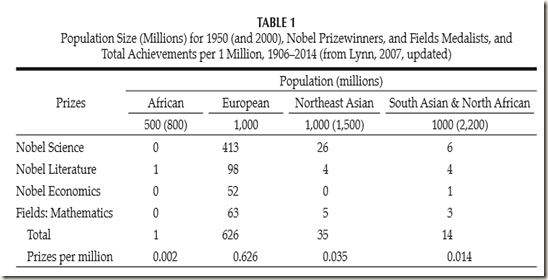 Discussing the anomaly that Northeast Asians are bright but donât achieve the highest levels of scholarship, they say:

Jews are very good students and at the same time good scholars. Conversely, Northeast Asians are exceptional students, but they make up only 8â9% of university professors in 2011 (National Center for Educational Statistics) and less than 5% of Nobel laureates.

What is going on? Under the rubric of âNovelty Seekingâ the authors say:

To become a successful scientist, one has to be interested in something novel, which requires intellectual curiosity. This kind of mentality is not required in student life, where theories and relevant facts are already systematically presented in textbooks. Rote memory is not, however, suï¬cient to become a good scientist. Some kind of novel perspective is necessary to extend or replace established ways of thinking.

analyses by Simonton (1998, 2009) have found that more original thinkers are moderately high in aspects of psychopathic personality, such as low Conscientiousness and low Agreeableness, which they combine with very high intelligence.

People high in individualism actively seek for associations, friendships, and partners in a horizontal relationship without a strong authority. Europeans score high on individualism, and science requires this individualistic mindset. When goals are deï¬ned by the state or the organization one belongs to, it is much more diï¬cult to pursue private values. [ ] Individualistic mentality has been indexed by the Dutch comparative psychologist Geert Hofstede (1980, 2002), reporting a diï¬erence of 1.98 standard deviations between major European countries and six Northeast Asian countries.

The authors create a genetics-based curiosity index q using proxies for novelty-seeking, social anxiety, and fear of exclusion, which they then test. Here are the national results. (By the way, note the high score for Spain). 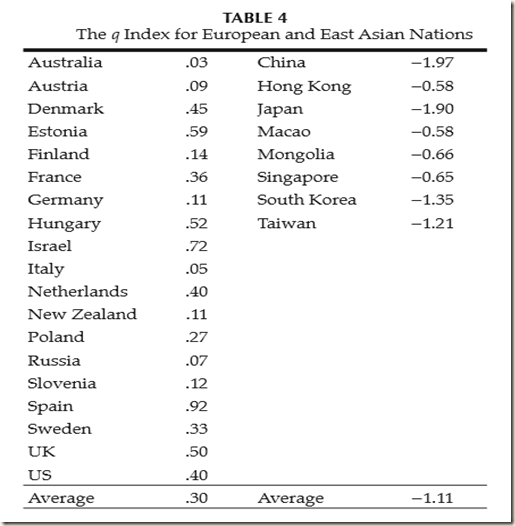 The novel approach speciï¬ed three genetic underpinnings of individualistic curiosity: DRD4 7-repeat, 5HTTLPR long allele, and OPRM1. Then these gene frequencies were incorporated into the derivation of q indices of nations, as a measure of the tendency to be curious and independent-minded. Lastly, we found that the regression analysis showed that not only IQ but also the q index is important for a population to produce prominent scholars.

They end with a final flourish:

Our ï¬ndings suggest that not only general intelligence, but also various genetic diï¬erences among populations have played crucial roles in the progress of science. Future research could focus on the question whether the mean q index is the same for original populations and immigrant populations. For instance, all awards to Chinese prize winners were awarded for work carried out at European institutes. Traditionally, Chinese culture has been more conservative than that of Europe and relatively unwelcoming of or even hostile toward new ideas and does not allow single researchers to be outstanding, which is often ascribed to the Confucian doctrine ( Wade, 2014) . This knowledge would enable us to decompose national academic attainments into inï¬uences of genetic factors and purely cultural transmissions.

It would seem that although Northeast Asians are brighter than Europeans on intelligence by about 5 IQ points they are lower in q, a proxy for individualistic curiosity. So, disorganised, uncooperative, individualistic and eccentric Europeans may still have a place in the new global economy, if only as comedians telling jokes about Japanese, Dutch and Finnish researchers.

The Lack of Progress in Science: Sex Differences
Razib Khan
• 98 Comments
← The Intelligence of GovernmentsISIR Conference in New Mexico 18-20 Sep... →
Hide 72 CommentsLeave a Comment
"Asians: Bright, But Not Curious?"
• 72 Comments
Commenters to Ignore
Commenters to ignore (one per line)