Here is a snapshot from Ian Dearyâs lecture âTen Quite Interesting Things About Intelligence Test Scoresâ (Teaching Intelligence https://www.unz.com/?p=75592) which aims to show the difference in the distribution of boyâs and girlâs intelligence scores. The point of interest is that even when boys and girls have exactly the same levels of intellect, differences in the standard deviations have considerable impact at the extremes of intelligence. Girls are more normal, boys are more extreme, so there are more boys at extremes, and the more extreme the extremes, the more boys. This finding at age 11 may go some way to explaining the sex ratios observed in later life occupations, or perhaps only partially so. 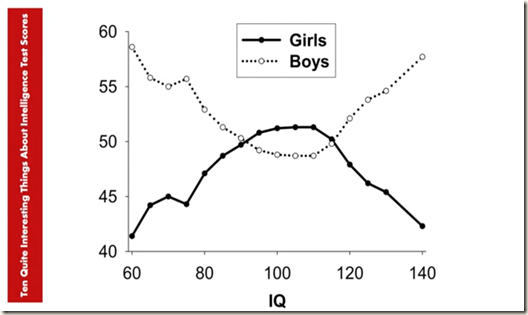 If, like me, you find the graphic a little difficult to understand, look at the new version below. 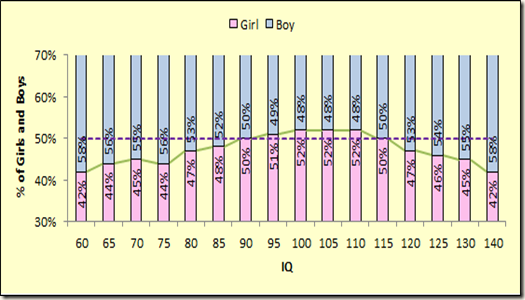 Starting from the left, you can see that those children who have an average IQ of 60 (very low) are 58% boys and 42% girls. At average IQ 100 there are 48% boys and 52% girls. At IQ 140 there are 58% boys and 42% girls. I have also increased the size of the Y axis, so that you can see a 40 point range of percentages from 30% to 70% rather than the 20 point range in the original, which made things look too dramatic. Both figures deliberately use zero suppression (donât show the full 0 to 100 percentage range) to exaggerate the visual effect, which is legitimate, because otherwise the effect would be very difficult to see. If you just stick one IQ distribution over the other it is hard to see the difference.

This shows that girls predominate over boys at the centre of the intelligence range, but there are fewer at the extremes, which is where boys are slightly more likely to be found. Assuming that the boy/girl difference is sustained in adulthood, then if men and women are promoted to jobs entirely on merit, and work equal hours, there will be 58 men to 42 women in the elite occupations.

However, it is less easy to give a social conditioning account of why girlsâ standard deviations would be more narrow, because it would involve proposing a force capable of simultaneously stopping girls from being very bright and stopping them from being very dull, and being able to do so in such a way that it showed up in a test taken by children working on their own without teacher or class input. How would one simultaneously hold back a bright girl from giving a bright answer and stop a dull girl from giving a dull answer? Furthermore, how would one do this so subtly as to narrow the girlsâ distribution of abilities only very slightly?

It is also difficult to explain how social conditioning could affect the standard deviation of brain volume. The sample size of 89 normal subjects is too small, but total brain volume as measured by MRI reveals suggestive results. The 42 males have a total brain volume ml of 1354 Â± 111 and 47 females a total brain volume ml of 1215 Â± 105. Reite et al. BMC Psychiatry 2010 10:79 doi:10.1186/1471-244X-10-79. By the way, I am not making a brain/intelligence association here (though there is a significant positive correlation) just a link with the common findings of sexual dimorphism.

Darwin regarded greater male variability as a fact, though of unknown cause. Greater variability suggests, but does not prove, a genetic cause. However, since the effect is only visible at the extremes it is important to ensure representativeness of the the study samples. The most representative sample is an entire population to make sure that neither dull nor bright children have been lost to the testing procedure. Wendy Johnson, Andrew Carothers and Ian Deary have the full population samples from Scotland in 1932 and 1946. âSex Differences in Variability in General Intelligence: A New Look at the Old Question.â Perspectives on Psychological Science 2008 3: 518 . I have used their data in this posting. They also have a good discussion about whether this finding is sufficient to explain observed difference in men and womenâs occupations and achievements. http://pps.sagepub.com/content/3/6/518

The male to female ratio in intellectual demanding occupations is higher than the ratio observed at age 11. Part of that is down to the fact that measurements at age 21 may be more representative of adult levels. There is some suggestion that girls develop faster than boys, and the relative advantage reverses in favour of men as they reach maturity. Girls have an early advantage in height, which then reverses in later development. Part of the occupational difference in later life is that many men are much more likely to put in long hours, and to value their careers and their status above other interests. Matched for time invested, the differences are smaller, and sometimes favour women. Importantly, the sexes have different interests. We shall return to all that later.

Of course, the great Dr Heim knew all about this 40 years ago, based on undergraduate intelligence tests. The title of the relevant chapter may be judged too inflammatory for current sensibilities, but it was said in jest.