Men are often startled when, without any warning, their dearly beloved suddenly asks âWhat are you thinking about right now?â

Naturally, the last thing a man should give is a truthful answer. Endless trouble will ensue if the man innocently replies: âHaving sex with your best friendâ. Therefore, in the unaccustomed role of agony uncle, I would suggest that men prepare a response in advance, and trot it out when required.

The best reply is one which is essentially male, but which avoids revealing any tendency towards mindless impersonal sex with random women chosen only for their physical characteristics. Are there any cognitive tasks in which men have a clear advantage over women? I will leave aside, for another time, the argument that men have a clear advantage over women on all mental tasks, amounting to about 4 IQ points. Also, I will not repeat here the well-established finding that womenâs variance in intelligence is less than that of men, so that as tasks get harder proportionately more men can be found at higher levels of intellect (and the same is true at very low levels of intellect as well). The two links shown below cover that ground.

However, what we need is a supremely male task, with which to blunt the force of the unsettling female enquiry about male mental processes. The text books generally agree that mental rotation (ability to imagine what a complex figure would look like in another orientation) is one in which males excel. For example, Halpern, Beninger and Straight (Sex differences in intelligence, Chapter 13, The Cambridge Handbook of Intelligence, Eds Sternberg and Kaufman, 2011) say: A male advantage in mental rotation is found as early as 3 to 5 months of age (Moore and Johnson 2008; Quinn and Liben 2008). Male performance on mental rotation exceeds that of females across all age ranges, effect sizes ranging from d=0.52 to d=1.49, and increase slightly across the life span. These are very big differences.

The Moore and Johnson paper can be accessed here: http://www.ncbi.nlm.nih.gov/pmc/articles/PMC2651884/

They say: To demonstrate mental rotation in human infants, we habituated 5-month-old infants to an object revolving through a 240Â° angle. In successive test trials, infants saw the habituation object or its mirror image revolving through a previously unseen 120Â° angle. Only the male infants appeared to recognize the familiar object from the new perspective, a feat requiring mental rotation. These data provide evidence for a sex difference in mental rotation of an object through three-dimensional space, consistently seen in adult populations.

Results are on a mere 2o boys and 20 girls, but seem clear cut. 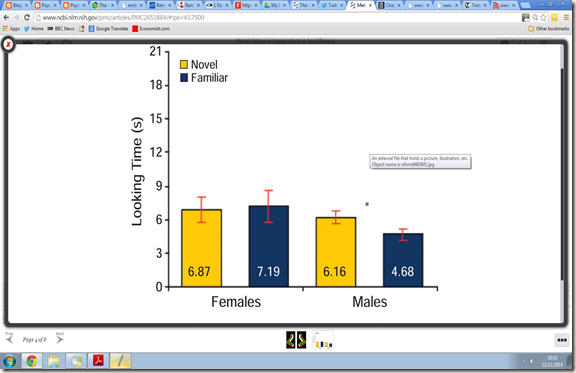 The authors are circumspect as to what is causing the sex difference, and they cover all the options.

I think that the fact that this male skill is evident by 6 months of age is significant. In my view that is long before it could have been shaped up by the usual suspects: a culture which imposes sex differences, families which encourage sex-appropriate forms of play, etc. It has all the appearance of a real sex difference in mental abilities.

So, I can now suggest a reply to sudden enquiries about male thoughts:

If she expresses surprise, reply that her response reveals her incomprehension of the workings of the male mind.