Even with no snow on the ground. Emperor Constantine made Christianity the official religion of the Roman Empire in the fourth century AD, but it took centuries more for the faith to spread to all of Europe. During the first several Christian centuries, the most important holy day was Easter. No one is sure how December 25th became the official day for celebrating the birth of Jesus, but according to tradition, Pope Julius I chose the date, sometime around 350 AD. The Bible doesnât say when Jesus was born, but according to the gospels, shepherds were tending sheep that night. Some people say itâs too cold in Bethlehem to be out with sheep at night in the winter, but December 25 was a strategic choice. It meant Christmas could compete with non-Christian festivals. One was a Roman celebration called Saturnalia, or the festival of Saturn. It was a week-long binge: eating, drinking, candle-lighting, and gift giving, and some of this was absorbed by Christmas. A mid-winter Christian holiday also could compete with the Nordic festival of Yule, that took place around the Winter Solstice.

Long before Jesus, Europeans celebrated the last of the darkest days of winter, and looked forward to brighter, longer days. Men brought home a Yule log, which might burn for as long as 12 days. Norsemen believed that every spark from the fire represented a piglet or calf that would be born during the coming year.

None of this is Biblican, and none of it is Jewish, and these changes made Christianity more acceptable to Europeans. By the Middle Ages, most people celebrated Christmas â which means Christâs mass. Believers attended church and then caroused the way people do during todayâs Mardi Gras.

In England, Oliver Cromwell and his Puritans didnât like this kind of carrying on. When they took over in 1645, they banned Christmas, which they thought was decadent and non-Biblical. When Charles II returned to the throne, the âmerry monarchâ brought back Christmas. The Pilgrims who came to America in 1620 had the same Puritan view and did not celebrate Christmas. From 1659 to 1681 Christmas was banned in Boston, and the authorities punished anyone they caught with the Christmas spirit. Christmas was celebrated in Jamestown, however, and was considered a British tradition. After the American Revolution, Christmas went into decline, as Americans turned their backs on British celebrations. Christmas came back, though, and by the late 1800s, Americans were celebrating more or less as they do today. Christmas did not become a federal holiday until 1870.

So, where did Santa and his reindeer come from?

The original Santa Claus was St. Nicholas, a monk who was born in Turkey, of all places, around 280 AD. He is supposed to have given away all his inherited wealth so he could help the poor, and he became known as the protector of children. Here he is in a 14th-century painting, looking after two boys, while their father gives thanks on his knees. By the Renaissance, he was the most popular saint in Europe, especially in Holland. The Dutch brought him to America in the late seventeen hundreds. They called him Sint Nikolaas, or Sinter Klaas for short â and Sinter Klaas became Santa Claus.

Sinter Klaas seems to have become associated with the Wild Hunt of Odin, in which the Norse god flies through the air, accompanied by spirits, Valkyries, angels, and even the devil. Santa Claus became firmly associated with Christmas in America through the poem, â âTwas the Night Before Christmas,â which an Episcopal minister Clement Moore wrote in 1822. Moore drew on older traditions to popularize the idea of a jolly man who delivers toys from a sled driven by reindeer, and who magically goes up and down chimneys. Our image of Santa Claus wasnât firmly established until 1881, when cartoonist Thomas Nast based a drawing on Mooreâs poem. Europeans have many Christmas myths. In Switzerland and Germany and in parts of Eastern Europe, Christkind â the Christ child â rides with St. Nicholas and delivers presents. 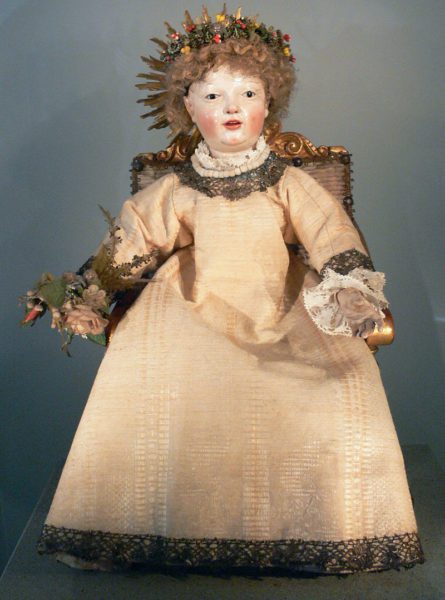 In Scandinavia a jolly elf rides around distributing gifts, in a sleigh pulled by a goat. Christmas meals vary by country. In Sicily, you eat seven different kinds of fish, and in Central Europe, the Christmas meal is fried fish. Christmas trees are recent, first apparently used by German Lutherans in the 16th century, and Germans took the tradition to the United States. Evergreen boughs are a much older pagan tradition from the Winter Solstice. They represent the continuity of life through the winter because they are green all year, and are associated with pre-Christian tree worship. Holly and mistletoe are also pagan traditions. Christmas cards are a British invention, with the first commercial cards produced in 1843. They carried the now-traditional greeting: âMerry Christmas and a happy new year.â Christmas Cards were introduced in the United States in 1875 by Louis Prang. The snowy scenes we now see on Christmas cards are a long way from Bethlehem. Christmas carols were originally European folk songs sung at harvest time, but also at Christmas. âGood King Wenceslas,â âThe Holly and the Ivy,â and âGood Christian Men, Rejoiceâ go back to the Middle Ages, and are among the oldest songs people still sing regularly. 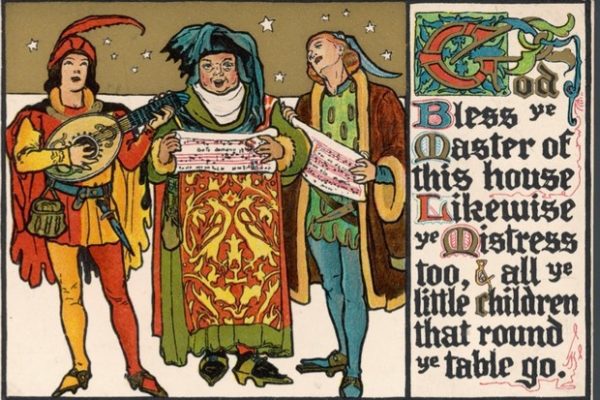 All this means that aside from the manger scene, the angels, and the wise men, just about everything about how we celebrate Christmas is European. So this winter, you can celebrate the birth of Christ, Yuletide, or the Winter Solstice. You can even go all out and have your own Saturnalia, Covid be damned. However you celebrate, you will be steeped in European traditions, many of them older than Christianity itself. And that is why you can always have a white Christmas â even if there is no snow on the ground. The Full Truth Behind Jordan Petersonâs Recent Speech on Logos
By âMoisheâ
E. Michael Jones
• 170 Comments • Reply
← Are Hispanics Turning Republican?'Itâs a Fake Religion Created by a Ps... →
Hide 35 CommentsLeave a Comment
"How Every Christmas Became White"
• 35 Comments
Commenters to Ignore
Commenters to ignore (one per line)

← Are Hispanics Turning Republican?'Itâs a Fake Religion Created by a Ps... →
Current Commenter
says:
Current Date at Time Now
Leave a Reply - Comments on articles more than two weeks old will be judged much more strictly on quality and tone
Cancel Reply
Commenting Disabled While in Translation Mode