Recently a doctor at Harvard University, David Ludwig, claimed that some parentsâthose of children who are morbidly obeseâshould lose custody of those children, for the childâs own good. This is reported in this news article from ABC News here.

Here are some quotes from the article:

Ludwig, an obesity expert at Children’s Hospital Boston and associate professor at the Harvard School of Public Health, shared his divisive idea in an opinion piece that ran in the Journal of the American Medical Association Wednesday: that state intervention can serve in the best interest of extremely obese children, of which there’re about 2 million across the United States.”In severe instances of childhood obesity, removal from the home may be justifiable, from a legal standpoint, because of imminent health risks and the parents’ chronic failure to address medical problems,” Ludwig co-wrote with Lindsey Murtagh, a lawyer and researcher at Harvard’s School of Public Health.

Of course, if you read my last blog, you know where Iâm going to go with this. Behavioral genetic evidence using twins and adoptees has found that the body mass index (BMI) of adults is not at all affected by variation in the home environment. What does that mean, especially in lieu of an âobesity epidemicââa greatly increasing obesity rate? For one thing, it is heredityâgenesânot the home environmentâthat is the primary determinant of oneâs weight. Heredity appears to be 80% responsible for the variation in adult BMI, about as much as adult height or adult IQ. But whatâs more interesting, and the key fact, heredity is 100% responsible for the similarity between parents and children in adult BMI. If youâre a chucky adult, donât blame it on your parents, short of criticizing them for passing on their genes to you.

But, the obesity rate is increasing, and surely that canât be genetic, right? Indeed, genetic changes in the population could not occur so quickly to account for the increasing obesity rate. (However, changes in the gene pool of the populationâotherwise known as evolutionâcan occur more quickly than you may have been led to believe. I will deal with that in a future blog post.) No, rather it is the environmentâthe gross environmentâthat has changed. It could not be something that any one family does, but rather something all families are doing that is making the difference. For instance, perhaps children spend more time doing indoor activities, like playing video games or surfing the internet, than than doing outdoor activities that require more movement, than in the past. Perhaps itâs because âjunk foodâ is cheaper and more readily available. But in any case, differences among families canât be the culprit in the expanding waist lines of adults. 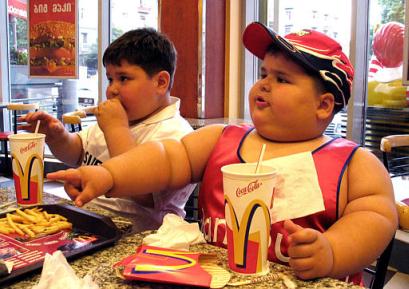 But Ludwig was talking about children. Here, there almost certainly are transient effects of the home environment, just as they are transient effects on the home environment on IQ. Both of these wear off as children grow older. These means that teaching your children healthy eating habits or enforcing exercise now is not likely to make much of a difference as they grow older; they will settle to their predisposed weight. Ludwig is focusing not on children that are a few pounds overweight but those who are morbidly obese, say, a nine year-old that weighs 300 pounds. While it might at first seem reasonable to intervene in such cases, in almost all such cases an underlying metabolic disorder is to blame. As cited in the article:

In a case that shocked many people across the country, 3-year-old Anamarie Regino, weighing 90 pounds, was taken from her outraged parents by government officials and placed in foster care. “Literally, it was two months of hell. It seemed like the longest two months of my life,” mother Adela Martinez said. As it turned out, it was two unnecessary months of hell. Anamarie didn’t improve at all in foster care, and she was returned to her parents. The young girl was later diagnosed with a genetic predisposition. “They say it’s for the well-being of the child, but it did more damage that any money or therapy could ever to do to fix it,” Martinez said. Anamarie, who is now 14, agreed.

The ABC News story also notes âthat there was no evidence that the state would do a better job of feeding children than their parents.â Basically none of Ludwigâs claims are with any merit, despite whatever good intentions he may have. Some of you may be familiar with child service agencies, and that the system is not necessarily all that kind to the children that end up in it, and neither are the foster homes children are placed in.

Worse still, Ludwigâs claims, if given merit, may be abused, giving license to child services to take away any child that’s a tad fatter than school officials and others would like.

No, rather than the state intervening in the lives of overweight children, further burdening parents with the false belief that they are harming their children by overfeeding them, we should recognize the importance of heredity and stop looking to nurture as the be-all end-all of development. Iâll leave with the closing words from the abstracts from the papers where this was researched:

In conclusion, family environment does not appear to influence the food use of young adults and thus nutritional education should be targeted at this age group to support development of healthy eating patterns.

Results are consistent in suggesting that environmental experiences are important for weight and obesity, although they account for much less variation than do the effects of genes. Furthermore, only environmental experiences that are not shared among family members appear to be important. In contrast, experiences that are shared among family members appear largely irrelevant in determining individual differences in weight and obesity. These conclusions are consistent with a growing body of evidence on the relative unimportance of such shared experiences for many psychological characteristics.

Vaxxing, Covid, and International Mortality Rates
Ron Unz
• 714 Comments • Reply
← Taming the âTiger Momâ and Tackling...What if It's Not Their Fault? the Myth... →
Current Commenter
says:
Current Date at Time Now
Leave a Reply - Comments on articles more than two weeks old will be judged much more strictly on quality and tone
Cancel Reply
Commenting Disabled While in Translation Mode